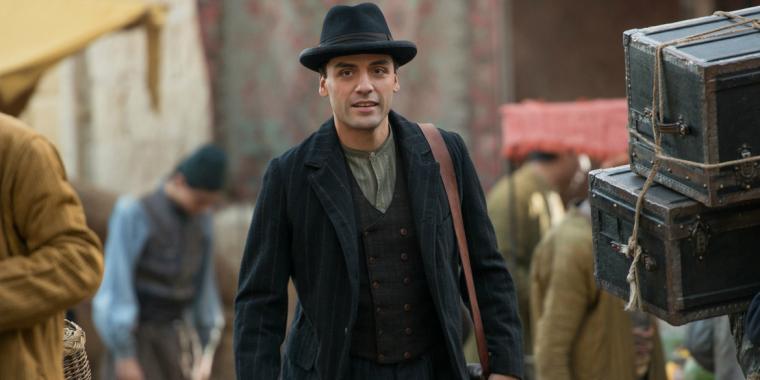 Oscar Isaac in The Promise

Not to be grossly insensitive, but films such as The Promise – writer/director Terry George’s historical epic set amidst the Armenian genocide of World War I – make me wish there were even more comic-book movies. X-Men: Apocalypse, after all, gave us Oscar Isaac as a world-destroyer, and Christopher Nolan’s Batman movies gave us Christian Bale as the Caped Crusader, and both actors were infinitely more entertaining in those outings than they are in this turgid love-triangle melodrama – a ceaselessly phony piece of “prestige” moviemaking that feels like it’s unsuccessfully aiming for Best Picture of 1985. (The dull movie that did win that prize, Out of Africa, feels like Pulp Fiction in comparison.)

As Isaac’s abashed Armenian medic and Bale’s heroically principled American journalist fight for the hand of a wide-eyed dance instructor – that French-Canadian Winona Ryder lookalike Charlotte Le Bon – hundreds of thousands of Armenians perish. And when The Promise’s über-generic title is finally uttered on-screen, and you realize that italicized vow just might be the one that Isaac’s character made to his faraway fiancée to not sleep with French-Canadian Winona Ryder lookalikes, you may find yourself, as I did, almost unbearably angry at George’s undeniably well-meaning, stupefyingly insulting movie. Are we really dramatizing the deaths of untold thousands – more than a million, maybe – just to see if Le Bon winds up with Apocalypse or the Dark Knight?!

Despite the commendable production design and hordes of (not-CGI) extras, almost nothing about this opus, budgeted at a staggering $90 million, feels of-the-period or believably lived-in, with Isaac, Bale, and Le Bon all giving capitalized Movie-Star Performances and their every interaction sounding scripted to high Heaven. (Shohreh Aghdashloo has perhaps the greatest smoky voice in modern movies, and even she can’t do anything with the expository embarrassments George and co-screenwriter Robin Swicord give her.) And with Gabriel Yared’s sentimental score trudging the minimal action forward, the movie, with its achingly predictable beats, even screws up scenes that theoretically couldn’t be screwed up, as when Isaac lays eyes on Le Bon for the first time in months – long after Le Bon thought he was dead – and George forgets to show us Isaac's initial reaction to her irritatingly doe-like presence. For nearly 140 minutes, I wanted to punch The Promise in its figurative face, and that’s without yet mentioning the “hilarity” of a med student fainting over a corpse, or Bale’s obvious contempt at having to say “Absinthe makes the heart grow fonder,” or even Bale’s character name, which is Chris. Chris. In 1917. As people of the time referred to Columbus and Marlowe, no doubt. 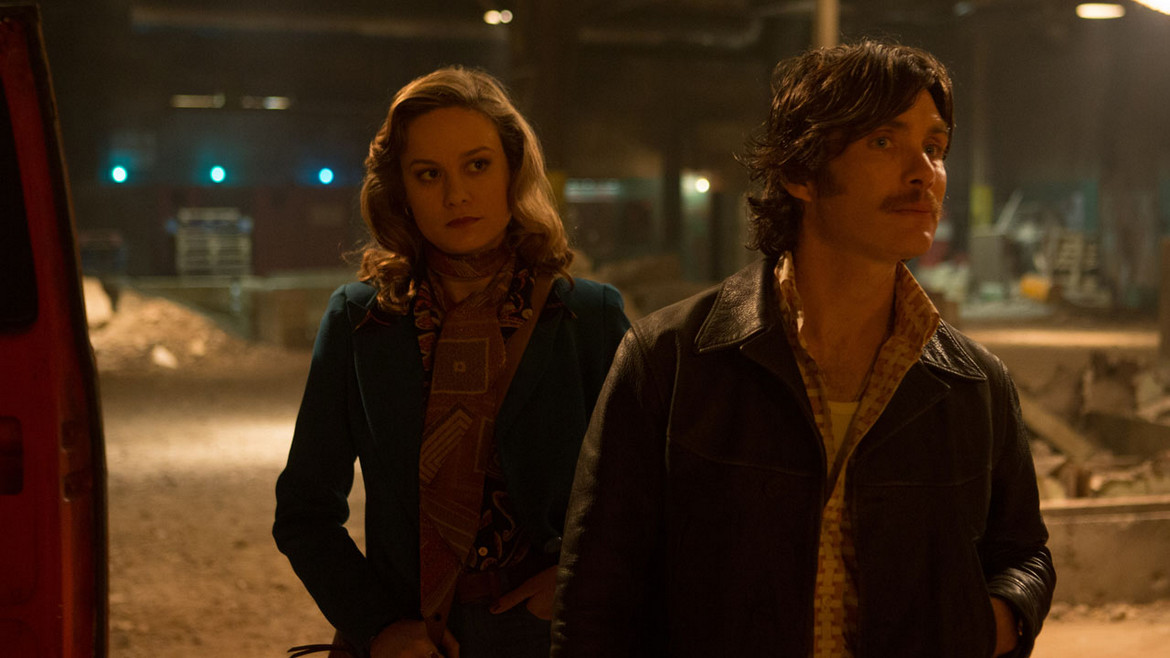 It might not be possible to discuss writer/director Ben Wheatley’s Free Fire without referencing Quentin Tarantino, considering this tale of warring gun traders with gifts for gab is almost exactly like what you’d get if the last five minutes of Reservoir Dogs were stretched out to a full hour and a half. But I think I can limit my QT-dropping to a mention that Wheatley’s genre flick would make the Pulp Fiction auteur proud ... ish.

Wheatley also directed last year’s kill-or-be-killed cult curio High-Rise, and while I found that end-of-days thriller abhorrent in its grim, suffocating pretension, at least it made character-motivated and geographic sense. This one – which finds two teams of untrustworthy lowlifes, in 1978, involved in a feature-length warehouse shootout – doesn’t. Despite the rather remarkable sound design, with some of the best lines landing merely as faraway echoes, you’re never entirely sure who’s siding with whom, which is kind of cool, but also never entirely sure who’s stationed where, which isn’t. (Grateful as I almost always am for 90-minute movies, it’s amazing how long that time can feel when you’re stuck in one locale with the same characters and still can’t quite get a grip on your surroundings.) I’m grateful, though, that Wheatley and co-scribe Amy Jump at least had the good sense to make Free Fire a comedy, and to hire a mostly impressive cast to spit out their down-and-dirty dialogue. One shudders to think what might have resulted were we meant to take this brutal slab of Guns & Ammo porn seriously.

In truth, the only reason I’m modifying that “impressive cast” with a “mostly” is because of Sharlto Copley, a terminal ham who I remain convinced is God’s punishment against moviegoers for crimes unknown. But Armie Hammer, as a sardonic stoner, hasn’t been this funny since The Social Network, while character actors including Sam Riley, Jack Reynor, Noah Taylor, Babou Ceesay, and Michael Smiley score plenty of chuckles through their profane wisecracks and astonishment at one another’s firearm ineptitude. (This is truly The Gang That Couldn’t Shoot Straight.) Cillian Murphy is a suavely amusing member of the IRA; Brie Larson earns the film’s biggest cackle with one perfect eye roll. And the ultimate show-stealer, perhaps, is someone we don’t even see – John Denver, whose “Annie’s Song” heartbreaker may never have been put to better, more ironic cinematic use. Somewhat incredibly, Wheatley even finds ways to make much of the violence funny; not only are his characters pathetically unable to make their kill shots, but the wounded masses can’t seem to walk (or rather, crawl) three feet without cutting themselves on broken glass or, in one instance, taking a used hypo to the palm. I wish Free Fire were better, but I’ll happily take a movie I can laugh with over one I’m forced to laugh at. 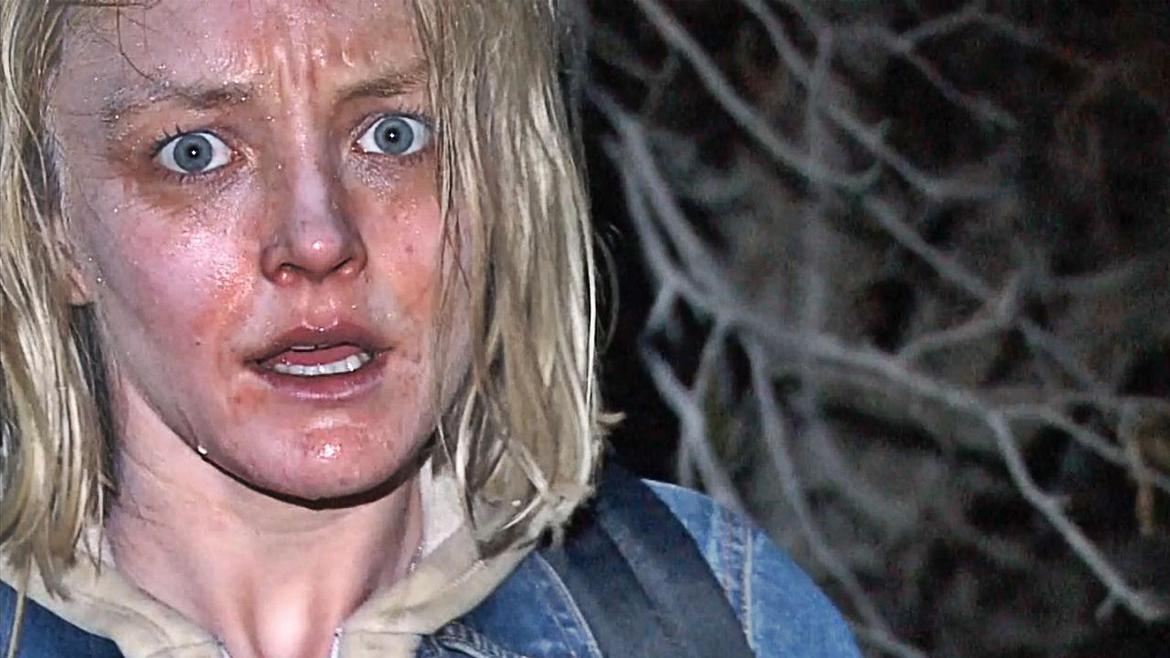 Shot entirely in “found footage” format, Phoenix Forgotten is an extremely low-budget sci-fi thriller about a young woman who’s shooting a documentary about her brother who disappeared years earlier while shooting his own documentary. Yes, this genre has officially crawled up its own ass. Surprisingly, though, writer/director Justin Barber’s feature-film debut is actually pretty good, and even pretty scary. Easily, perhaps too easily, described as “The Blair Witch Project with UFOs,” the film’s second half is particularly reminiscent of that wildly influential horror smash, with the home-movie footage showing three teens setting out to uncover a mystery, only to become lost, panicked, separated, and at the mercy of unseen forces. (One of the teens is even named Joshua, meaning that, just like in Blair Witch, long minutes are spent with a character screaming, “Josh!?! JO-O-O-O-SH!!!”) But Barber is clearly a talent to watch – so much of one, in fact, that by the time the end credits rolled, I wasn’t at all shocked to see Ridley Scott listed as a producer. The performances may not always be convincing, but the filmmaking sure is; Barber’s visual effects, more hinted at than seen, are subtly evocative and creepy, and this sharply edited work also boasts superior sound quality and composition despite the intentionally tacky home-video aspect. Best of all, Barber appears to have a terrific sense of humor. There’s a particularly wonderful, unforced gag when one of the brother’s tracking shots is revealed to have been filmed by positioning a camera on a skateboard. (The sound of the rolling wheels gives it away.) And while the acting is hit-or-miss throughout, Chelsea Lopez, as one of the missing teens, is a frequent breath of fresh air who not only resembles Jodie Foster in her Freaky Friday heyday, but pulls off a rather excellent impersonation of the star – “I’m okay to go! I’m okay to go!” – in Contact. I would’ve enjoyed this Phoenix Forgotten bit even more had the scene not been set in March of 1997, considering Contact wouldn’t be released for another four months. Maybe it wasn’t a UFO that snatched the kids, but rather a time machine?

For reviews of Born in China, Gifted, Unforgettable, and The Lost City of Z, see “Welcome to the Jungles.”