Assigned Seal and Deliveries: “American Made,” “Battle of the Sexes,” and “Flatliners” 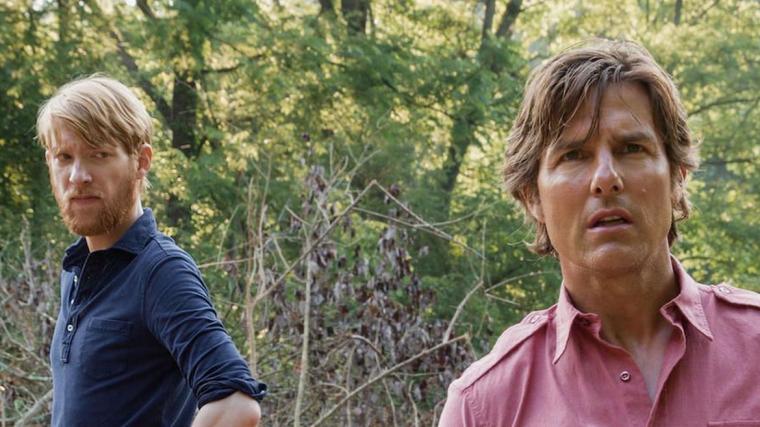 Domhnall Gleeson and Tom Cruise in American Made

Barry Seal, the subject of director Doug Liman's action comedy American Made, was a real-life drug smuggler and DEA informant who weighed roughly 300 pounds and was said to be nicknamed “El Gordo,” which translates as “The Fat Man.” Naturally, because his story is now a Hollywood movie, a typically buff and ageless Tom Cruise portrays Seal – not under the actor's Tropic Thunder prosthetics, but behind aviator glasses and that iconic ear-to-ear grin suggesting Top Gun 2 has landed sooner than expected. Yet the biggest problem with this diverting, fundamentally unsatisfying film isn't that Seal is being played by Cruise. It's that American Made is being played by The Wolf of Wall Street.

A tale so byzantine and outrageous that, as reported, it could only play as farce, Liman's latest opens with our introduction to Seal as a fantastically bored, not-terribly-bright TWA pilot whose smuggling of Cuban cigars has caught the attention of the CIA – specifically that of a bearded agent who calls himself Schafer (Domhnall Gleeson). This smiling mystery figure offers to not report Seal's crimes if the pilot agrees to a job flying over South America and taking photos of suspected communist groups, and with barely a second thought, Seal agrees. In deference to those who don't know what happens next – and God knows none of us will likely ever know the whole story – that's where I'll end the synopsis. I will, however, add that American Made's continent-hopping exploits eventually involve smuggled cocaine and AK-47s, expansive money-laundering schemes, grand-jury testimonies, arms deals, the Medellín Cartel, the FBI, the ATF, the Arkansas state police, Pablo Escobar, Manuel Noriega, Ronald Reagan, George H.W. Bush, and Oliver North. That's right, folks! It's Iran-Contra: The Laugh-Riot!

It probably doesn't need to be said that there's a hell of a movie to be found in all this. Unfortunately, Liman and screenwriter Gary Spinelli don't quite find it, even if they seem to be having a good time looking. While the film certainly would've benefited from spikier dialogue, Spinelli has so much audacious material at his disposal that he can keep us engaged simply by letting one astounding, absurd event steamroll past the next until we're almost too dizzy to keep them straight. And Liman, as is his bent, paces the action with boundless energy. (One of the director's funniest, fastest-paced works remains 1999's Go, and from The Bourne Identity to Mr. & Mrs. Smith to the Tom Cruise vehicle Edge of Tomorrow, Go would be a fitting title for nearly every release on Liman's résumé.) Yet there's a price to be paid in all this speedy insouciance, because although lots of things happen in American Made, we're given almost no sense of what they mean – particularly for Barry Seal. 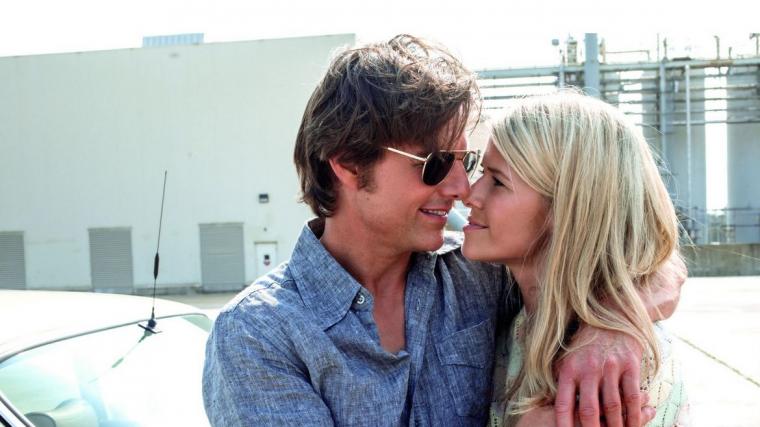 Cruise, who's always at his best in comedy, provides amusing externals in his characterization, and appears to have fun playing Seal as an excitable, money-hungry charlatan who's in way over his head. But it took all my restraint not to put “characterization” in quotation marks, because Cruise doesn't let us see what, beyond basic greed, drives this man to make such reckless decisions and break the law with such blatant disregard for his and his family's safety. (This is true even when Schafer makes an early reference to Seal's wife Lucy that reads as a not-so-veiled threat.) As usual with Cruise, we're meant to be charmed by his devil-may-care attitude, mega-watt smile, and consistent, apparently contractual demand to perform his own stunts. (Look! It's really him flying!) Watchable as he is, though, this is an under-thought, even vacuous performance, and the casting alone makes American Made inherently less gripping than it might've been. Throw Tom Cruise into situations involving guns and life-threatening peril and it's no surprise when he miraculously keeps emerging unscathed – that's what the guy does. But imagine the role played by a human-scaled actor such as, say, Paul Giamatti or Michael Stuhlbarg, and you'll realize what kind of comic-gold-mine opportunity was missed.

Yet that doesn't appear to be the sort of film Liman wanted to make, evidenced not only by Cruise's participation, but a presentation that sidesteps exploration in favor of a blithe, indulgent Wolf of Wall Street sheen; we're meant to be turned on by all that money and power without really sweating the details. How does Seal, hardly the sharpest crayon in the box, so quickly turn into a coke-smuggling mastermind? How does he so quickly become a smuggling entrepreneur, with a crew of fellow pilots willing to team up for trans-continental missions? How does Lucy, a harried mother of three, feel about her husband's clearly criminal activities? (Stuck playing a thankless version of Margot Robbie's Wolf vixen, Sarah Wright stops being a character the second that Cruise empties the first suitcase of cash on the floor.) Why are figures played by Jesse Plemons, Caleb Landry Jones, Lola Kirke, and others established as narratively essential only to be tossed aside after a few scenes? American Made is, blessedly, an hour-plus shorter than Scorsese's 2013 opus. But it's similarly one-dimensional in its celebration of immorality and “greed is good” philosophizing, and as enjoyable as Liman's outing occasionally is, it still left me pining for the far more interesting movie that's buried inside.

BATTLE OF THE SEXES

As with American Made, directors Valerie Faris' and Jonathan Dayton's Battle of the Sexes doesn't quite live up to the promise of its juicy, real-life subject matter – in this case, the legendary 1973 exhibition match between tennis superstars Billie Jean King, a fierce advocate for women's rights, and Bobby Riggs, a proud, self-described male chauvinist pig. Though we're repeatedly told of Riggs' loutishness, Steve Carell plays the one-time champ as more of an innocuous fool than a true adversary; pretty much any film clip you'll find of the actual Riggs shows the man more casually hateful than Carell ever allows himself to be. (This actor who so fully vanished into his John du Pont likeness in Foxcatcher also seems to struggle a bit, here, with spitting words out through his glaringly false teeth.) Meanwhile, too much of screenwriter Simon Beaufoy's fact-based plotting feels uncomfortably manufactured, such as the sequence that finds King's husband Larry (Austin Stowell) and her hairdresser and new lover Marilyn (Andrea Riseborough) meeting in an elevator en route to King's hotel room. Even though the film is set in the 1970s, was it really necessary to bring Three's Company to mind?

But Battle of the Sexes is still a touching, even moving, experience, due primarily to the no-nonsense decency in Emma Stone's portrayal of King, and to the genuine romantic ardor in her scenes with the excellent Riseborough. Interestingly and unexpectedly, the film is a much stronger love story than it is a sports movie or empowerment saga, and beyond the heat generated by the former Birdman co-stars, there's more filmmaking savvy in the women's first salon flirtation – the other customers' chatter fading into a soundscape that's all deep breaths and gentle scissor cuts – than anywhere else in the picture. Still, the exhibition-match finale that combines actual and recreated footage is genuinely exciting and rather beautifully edited. The carnival-like atmosphere of the match, both on TV and in the Houston Astrodome, is delightfully rendered, as are the period design and costuming throughout. (Overflowing with era-appropriate radio hits, the soundtrack is like the coolest K-tel album never released.) Plus, as should come as no surprise given the duo's Little Miss Sunshine, Faris and Dayton display an expert knack for casting. I loved seeing significant roles played well by the underseen Bill Pullman and Elisabeth Shue. Sarah Silverman is a tough-minded hoot as booking agent Gladys Heldman. And even if they're only around for a scene or two, Battle of the Sexes manages to make fine use of talents including Alan Cumming, Fred Armisen, Chris Parnell, Jamey Sheridan, and Lewis Pullman, with Natalie Morales terrific as tennis pro and TV commentator Rosie Casals, who quite obviously does not want to be embraced by Howard Cosell. So she's terrific and empathetic. 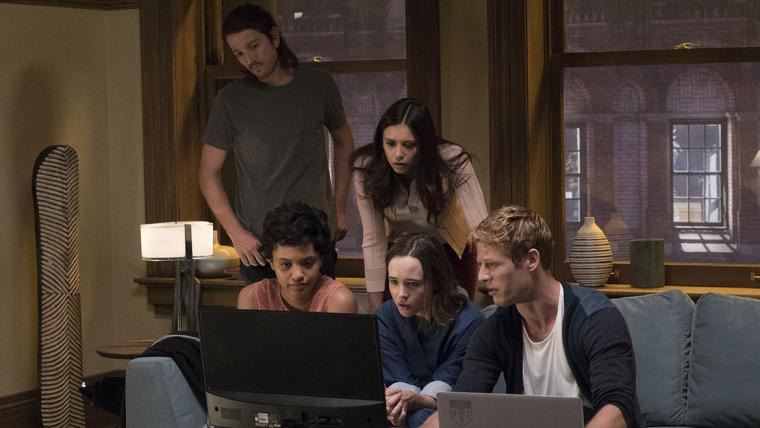 In director Niels Arden Oplev's remake of 1990's Flatliners, Ellen Page's med student – volunteering to have her heart stopped and resuscitated in the name of fright-flick “research” – reminds her lab partner to make sure the experiment is being recorded, “Otherwise this whole exercise is pointless.” May I suggest that it's pointless regardless? I recall no one much caring about Joel Schumacher's Flatliners back in the day, either; if my cineplex-employee memories from that summer can be trusted, it was just something to see when you weren't up for another viewing of Die Hard 2 or Ghost. But as blah as that low-stakes, back-from-the-dead thriller was, at least it gave us charismatic performers in the fledgling doctors played by Kiefer Sutherland, Julia Roberts, Kevin Bacon, William Baldwin, and a revelatory comic-relief actor named Oliver Platt. Oplev's offering, in contrast, gives us Page, Diego Luna, Nina Dobrev, James Norton, and Kiersey Clemons, and with even the most gifted among them personality-challenged here, there's not a soul in that group I'd trust with a life-saving procedure. Maybe Diego, but only if he promised to keep his hair out of his eyes.

It's impossible to get mad at the film for desecrating a classic considering how many leagues removed from “classic” the Schumacher outing is. But despite our two scenes with Kiefer, now silver-haired like dad Donald, this wholly unnecessary update is still resolutely tedious, dull, and not-scary, boasting the single most embarrassing five-guest rager I've ever seen and perhaps the most shockingly inept jump cut of the millennium. (In one shot, Norton is at a pier, submerged in water, screaming, with a knife through his hand; in the very next shot, he's in a bar, dry, quiet, and watching an iPhone video.) This Flatliners is, however, a treasure trove for cliché-hounds, given characters' endless walks through dark corridors, panicked “It was only a dream!” wake-me-ups, and a familiar children's song played as creepy background music, with the repurposed tune in question an initially chirpy, eventually sinister take on “If You're Happy and You Know It.” At my screening, not one of us clapped our hands.