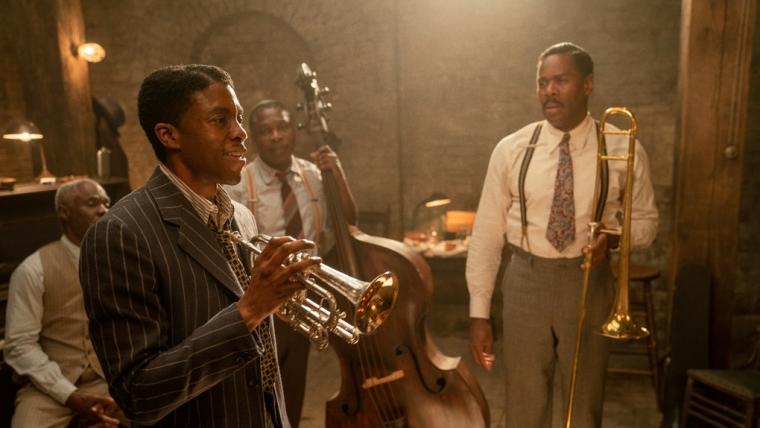 Most viewers will enter Netflix's film version of August Wilson's Ma Rainey's Black Bottom knowing that it marks the final screen appearance of co-star Chadwick Boseman, who, at 43, passed away in late August. But what would we have made of Boseman and his portrayal of Wilson's hot-tempered, cornet-playing upstart Levee Green had we not known that – indeed, had director George C. Wolfe's stage adaptation been the actor's movie debut?

My guess is that nearly all of us would have been in total thrall to a fierce, dynamic talent who appeared to be a good 15 years younger than Boseman's actual age, and a performance so brazenly theatrical and electrifying that you couldn't imagine Boseman ever playing a dignified, upstanding Thurgood Marshall, or the regal, noble T'Challa in a bunch of Marvel movies. James Brown, sure, and Jackie Robinson, too. But Boseman's deliberately outsize physicality and readings in Ma Rainey's are so thunderously vigorous and alert, and so specific, that the performer is nearly unrecognizable (and not because of his drastic, cancer-imposed weight loss over the past couple of years). Wolfe's cinematic take on one of Wilson's best-known and most accessible plays has its share of problems, not least of which is that it isn't nearly as cinematic as it perhaps ought to be. Nevertheless, the film is vital as a recorded piece of American-theatre history, and absolutely indispensable as a Chadwick Boseman farewell. Like Heath Ledger for The Dark Knight, Boseman won't win an Academy Award next spring because he died. He'll win because he was likely going to win regardless.

The second in Wilson's 10-play cycle of stage dramas (one for each decade) exploring the African-American experience in the 20th century, Ma Rainey's Black Bottom is the only one focused on an actual historical figure: legendary blues singer Gertrude “Ma” Rainey, played here by Viola Davis. Set in the 1920s on a sweltering day in a Chicago recording studio, Wolfe's film version tells two concurrent narratives: one involving Ma's fight to retain control over the distribution of her music (much to the chagrin of her white manager and studio owner); the other concerning Ma's studio musician Levee and his impatient desire to jump-start a solo career. And even if you weren't initially aware that Wilson's material had its start in the theatre, you'd only need about 15 minutes of Wolfe's and screenwriter Ruben Santiago-Hudson's adaptation to figure it out.

As in the 2016 movie of Wilson's Fences directed by and starring Denzel Washington (who serves as one of this new film's producers), the language in Ma Rainey's, a kind of poetic naturalism, is unmistakably of the stage – characters monologue as often as they converse – and the grime-filled backgrounds, even on city streets, don't look truly lived-in; they look like the carefully art-directed sets that they are. This amounts to a style that can drive some cinephiles crazy. (“If I wanted to see a play, I'd go to the theatre!”) As a theatre fanatic myself, though, I'm not much bothered by it, and in general, I'll happily concede “realism” for the deep pleasures of watching first-rate stage material in the hands of professionals who know how to mine its worth. A legendary Broadway director whose credits include the original, two-part New York production of Angels in America, Wolfe doesn't appear to be a comparable screen talent, restricting most of his camera set-ups to the standard two-shots and closeups familiar from innumerable TV movies. (Only in the prologue, a clever bait-and-switch that begins with desperate-seeming Black men racing through the woods, does Wolfe demonstrate much cinematic ingenuity.) Yet the Ma Rainey's helmer does let his clear love of the blues bleed through everything from the musicians' banter to Ma's sultry nightclub routines, and best of all, he lets Wilson's gorgeous words breathe while keeping the pace snappy, enabling Santiago-Hudson's script – a judicious edit of Wilson's two-act drama – to clock in at just over 90 minutes. There should be trophies for directors who can do just that. 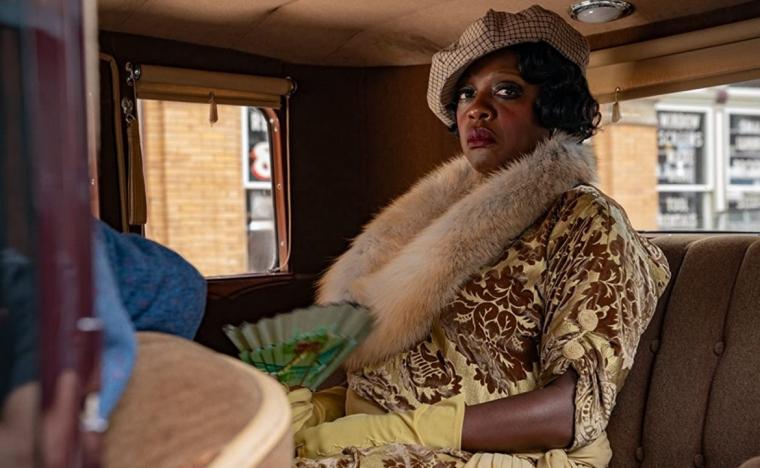 Wolfe, as his theatrical reputation would suggest, is also clearly in love with actors, although I'm not convinced that the entire Ma Rainey's ensemble received the necessary guidance here. A number of performers are sublime: the marvelously low-key Colman Domingo as trombonist Cutler; Glynn Turman, whose recollections as world-weary pianist Toledo are suffused with lingering pain; Michael Potts, wonderfully avuncular as bass player Slow Drag; Dusan Brown, endearing and heartbreaking as Ma's stuttering nephew Sylvester. (The young man's attempts to get through a recorded introduction provide much of the horror and humor in the play's/film's second half.) But as portrayed, albeit rather effectively, by Jeremy Shamos and Jonny Coyne, the roles of Ma's harried manager Irvin and impatient studio boss Mel don't have any particular depth and feel somewhat too heightened even for Wolfe's overtly theatrical approach. Taylour Page, as Ma's blithe lover Dussie Mae, is already stuck with Wilson's worst plot device (her tootsie wastes no time coming on to Levee the minute Ma's back is turned), and she gives an obvious, amateurish performance, to boot – one that causes an energy dip every time Dussie Mae sashays into view.

As for Viola Davis, her Ma is certainly memorable in her imposing demeanor, bellowing demands, greasepaint makeup, and body prosthetics that add 100-ish pounds to the actor's frame. Yet as impressive as the feat is, I could never quite get past it as a performance. Davis, who won a Tony Award for Wilson's King Hedley II and a Tony and Oscar for her maligned Rose in Fences, is obviously comfortable in the late playwright's language, and after playing so many long-suffering, incessantly weeping figures on-screen, it's both a delight and a relief to see her unapologetically owning the joint and refusing to sing one note until Ma gets her three bottles of ice-cold Coca-Cola, dammit. Her lip-synching of Ma's numbers, though – with Maxayn Lewis providing most of the vocals – isn't completely credible, and the sexy, reedy blues voice that comes out of her doesn't at all match the baritone timbre of Davis' speaking voice as Ma. And most damagingly, Davis doesn't seem to wholly connect to any of her co-stars; her Ma Rainey feels like a performance that could have been given on an otherwise-empty stage, or in front of a mirror. This might very well have been intentional, given that Ma's natural, hard-won imperiousness, especially for its time, probably demanded that the artist not connect with her perceived lessers. However it was intended, though, the choice makes Davis' portrayal feel oddly static despite its inherent showiness. This Ma is both admirable and sadly redundant.

It's Boseman who makes all of your complaints moot. (Well, nearly all.) Loose-limbed, eager, pugnacious, funny, infuriating, chatting a mile a minute in a voice almost a full octave higher than the one we were used to hearing from him – his Levee is an incandescent portrayal, but not like the posthumous one Heath Ledger gave as the Joker. The exact opposite, actually. After a while, watching Ledger's ticklish malevolence, it became easy to forget about the actor's recent passing. Watching Levee rail against God, however, and laugh at his bandmates for their concern about him inviting “bad luck” when his luck couldn't possibly get worse, Boseman is wrenching partly because we know – yet didn't until his shockingly unexpected passing – about the horrible hand fate had dealt him. At no point, though, does Boseman's Levee sink into self-pity (at least not without accompanying anger), and the actor doesn't, either; you watch this joyful and terrifying performance and think, My God, how great it is to be alive. How great it is that he was alive. And Boseman is thrillingly, unquestionably alive in Ma Rainey's Black Bottom. Turns out he didn't need Black Panther's wardrobe to be a superhero. 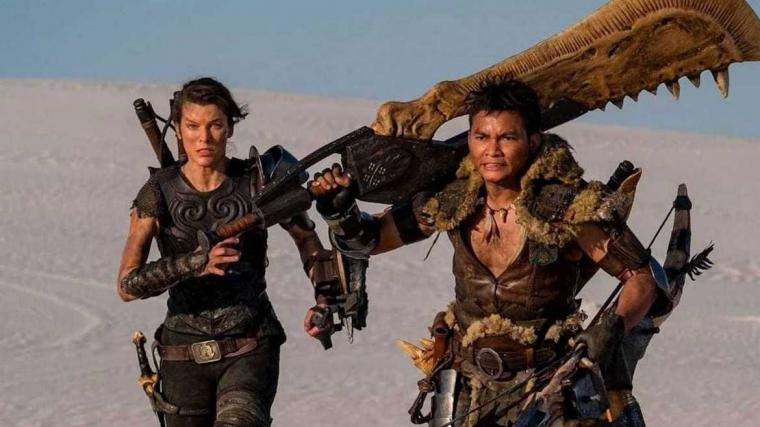 This upcoming Friday, with the collective release of Wonder Woman 1984, the Tom Hanks Western News of the World, and the acclaimed black-comedy thriller Promising Young Woman, our area's still-open cineplex will be debuting something truly novel: a trio of titles that a lot of people might actually want to see! In the meantime, this past weekend, we got a two-fer in the video-game adaptation Monster Hunter and the low-rent stalker flick Fatale, so … . Only four more days 'til Christmas, folks!

In truth, neither of those offerings is awful, and Monster Hunter was quite surprisingly not-awful. Directed by Paul W.S. Anderson and starring Milla Jovovich, the pair responsible for (if not necessarily respected for) all those Resident Evils, the movie sends a military team through a wormhole and has them confronting a race of skyscraper-sized uglies while trying to figure out how to get back to Earth. Well, that's not entirely accurate, because except for Jovovich, every single troop is picked off well before a return can be planned. But at least martial artist and occasional screen actor Tony Jaa shows up, and after he and Jovovich spend an inordinate amount of time senselessly kicking the crap out of each other, they reluctantly unite for behemoth-massacring fun that involves dropping grenades into leviathan mouths and Jovovich teaching Jaa what chocolate is. All told, Anderson's latest is about as stupid as you'd expect, and certainly as derivative; those gruesome, ginormous insects from Starship Troopers really should consider reuniting for an intellectual-property lawsuit. But Jovovich, that B-grade Sigourney Weaver, is still an enjoyably stoic ass-kicker, and the likable Jaa, of course, moves like the dickens, and Monster Hunter delivers just enough dumb, pulpy, PG-13 amusement to make it a decent sit. Plus, if you're still smarting over Hollywood's decision to withhold the Dune remake until next Christmas, we are given a sizable sand worm here, and without the added presence of Timothée Chalamet. So I guess that's something. 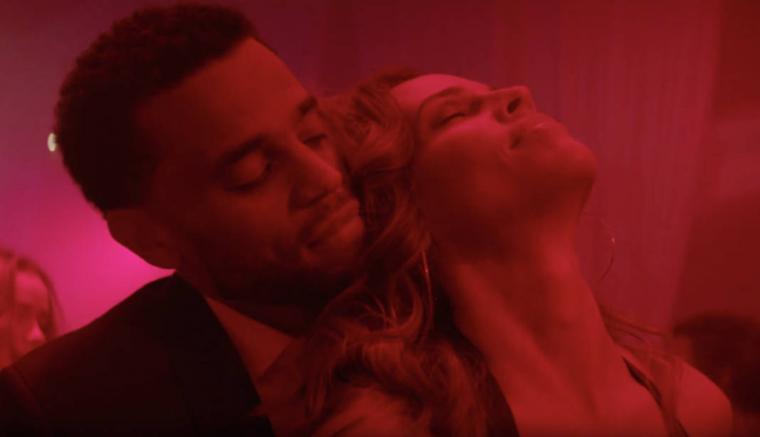 Fatale is something, too … though I'm not entirely sure what. A halfhearted attempt at film noir? A strangely impotent erotic thriller? A reason for Hilary Swank to apologize to her two Oscars every morning? Directed by Deon Taylor, the auteur behind such crap-cinema classics as Chain Letter and Traffik and The Intruder, this lurid revenge fantasy finds Michael Ealy's unhappily married man enjoying a one-night-stand with Swank's (initially unrevealed) LAPD detective, and living to regret it after his eventually jilted lover is put in charge of Ealy's home-break-in case. From that point on, a lot happens – a lo-o-ot – and none of the twisted shenanigans is even borderline-believable. That doesn't mean what unfurls isn't amusing, however, and I audibly giggled at a couple of screenwriter David Loughery's more outrageous conceits and a few of Swank's sillier attempts at evoking Glenn Close in Fatal Attraction. (There are no boiling bunnies, but when Ealy told Swank she was psychotic and she replied with a truly psychotic “Maybe?”, it was a pretty juicy treat.) Swank deserves better, and Ealy and his peerless cheekbones deserve better, and heaven knows we all deserve better. But as watchable garbage goes, Taylor's time-killer is acceptable enough, even opening on a guilty-pleasure line when Ealy, in voice-over, insists, “I was always the smart one.” Maybe before signing up for Fatale you were, Mike.