Baby Boon: “Together Together” and “Mortal Kombat” 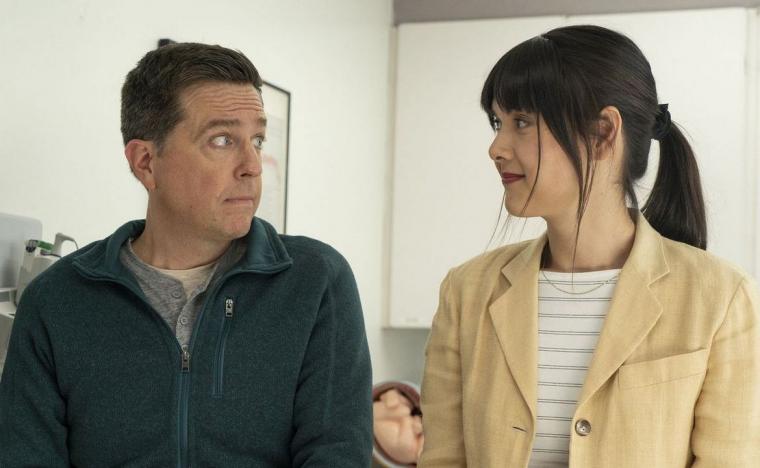 Ed Helms and Patti Harrison in Together Together

Honestly, I didn't mean to eavesdrop. But while heading toward the cineplex auditorium housing the non-rom-com Together Together, I found myself walking about 15 feet behind a couple whose conversation practically brought me to (happy) tears.

It was a man and a woman, both early-to-mid 40s, and I neared them as the gentleman was coming out of the restroom. He said something to her that I didn't catch that caused them both to laugh, and then, proceeding to the theater, they talked about how long it had been since they last saw each other. She mentioned how glad she was that he could join her for the movie – one that she saw an online trailer for and thought looked “really charming” – and admitted that it might not wind up being his kind of thing. He said not to worry: He was just glad to see her, and glad to see anything she wanted to see.

I lost track of them after taking my seat. But I soon got emotional again, because prior to the movie proper, there was a short filmed introduction by writer/director Nikole Beckwith. She thanked us for being there and spoke briefly about the joy of making Together Together – not a completely unusual preamble, as I remember Zack Snyder doing the same thing in advance of Batman v. Superman. That, however, was five years ago, and the spring of 2016 was most definitely not the spring of 2021. So Beckwith went on to recognize that this was likely the first time in a year that many of us were even at the movies, let alone one of her movies, and so her gratitude came with a sting of real-world recognition. I've personally seen dozens of cineplex releases since August, most often in auditoriums numbering 10 patrons max. Yet I'm not sure that the couple I followed into the theater did, or whether the other dozen-or-so attendees did, or whether the significantly crowded lobby of (I'm guessing) Mortal Kombat fans did. Here we were, though – masked and socially distanced, yes, but at the movies. Together.

It doesn't in the least … although I'll admit that, early on, there was some cause for concern. Together Together premiered in January as part of the (virtual) Sundance Film Festival, and it's a true “Sundance comedy” down to its easy hook and excellent title, telling of how straight, single, middle-aged app-inventor Matt (Ed Helms) recruits 26-year-old barista Anna (Patti Harrison) to be the surrogate mother for his child, and how their platonic friendship blossoms over the course of nine months. Beckwith's outing is consequently a little too cutely designed as a narrative triptych following Anna's first, second, and third trimesters, and the first-trimester section, for my part, was more endured than enjoyed.

From the start, Harrison was clearly a beguiling, naturalistic talent with a well-seasoned wit and a gift for being sarcastic without seeming mean-spirited. Helms, though, appeared to be doing little more than a feature-length reprise of his Andy Bernard from The Office, portraying a dweebish, needy, preemptively apologetic “nice guy” who doesn't realize that his grand gestures make him look abjectly clueless. (In the movie's most embarrassing moment, Matt greets Anna post-ultrasound with a stuffed animal larger than she is.) Harrison was playing emotional truth and Helms was playing pure sit-com, and Beckwith's writing was doing nothing to dissuade those choices, and I kind of dreaded the inevitably precious indie-flick humor and warmth to come. 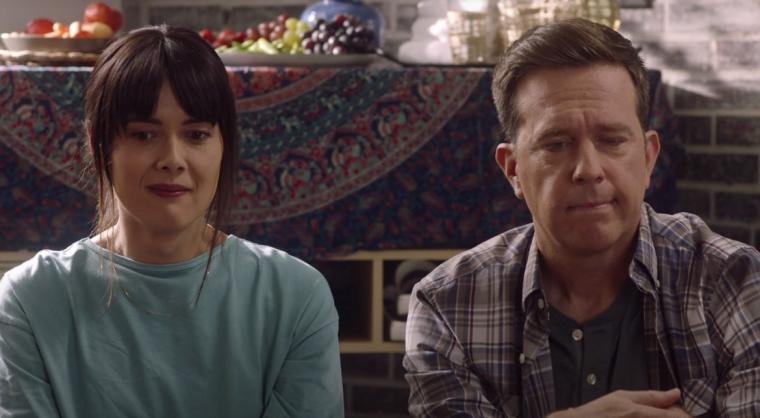 Yet the damnedest thing happens: Together Together winds up feeling real, and does so even before its shaky first-trimester business has concluded. After the predictable comic mismatch of its early Odd Couple scenes (“Can two platonic partners share a uterus without driving each other crazy?!”), Beckwith wisely lets her characters simply talk to one another. We come to understand how and why lonely yet loving Matt decided to become a single father in his mid-40s. We understand the financial and familial circumstances that would make the similarly lonely Anna, a woman 20 years Matt's junior, agree to be a surrogate. And for at least the last 70 minutes of this film's brisk hour-and-a-half running length, we get to see, moment by moment, precisely how the pair's defenses are broken down and their insecurities revealed and their allegiance fortified. With no threat of romance between Matt and Anna even slightly suggested, we get to see the foundation and building of a true relationship. Together Together is a little too safe and “Sundance comedy” to be considered groundbreaking. Yet it still feels novel: a tale of opposite genders a generation apart who find common ground, and even mutual love, without skeevy subtext, and certainly not skeevy text. (In her most audacious decision, Beckwith has Anna castigate Woody Allen for his cinematic predilection toward young women – an unexpectedly biting bit considering the movie's black-and-white opening credits are in the instantly familiar Windsor Light Condensed font that Allen has always employed for his credits.)

Helms quickly catches up with Harrison in terms of emotional transparency, both are consistently very funny, and the film would've been perfectly satisfying had its only claim to our attention been the actors' frequently smooth, occasionally tetchy rapport and burgeoning attachment. (I loved it when Matt showed Anna a season-one episode of Friends and she called the sitcom “so dumb.” I loved it even more when they watched the series' season-10 finale and she labeled it “so dumb” while wiping away tears.) But two elements of Together Together make the movie stand well above most of its indie-comedy peers. One is the almost-ridiculous richness of its supporting cast. Upon first seeing the film's trailer, I was already jazzed that Matt's parents were being played by those under-recognized greats Nora Dunn and Fred Melamed, both of whom are sublime in their sketch-character precision. I had no idea we'd also be treated to the magnificent Tig Notaro's inscrutable surrogate-couple therapist. Or Greta Titelman's unequally empathetic baby-needs salesperson. Or Anna Konkle's striving-for-chill birthing consultant. Or, fighting for best-in-show honors, Sufe Bradshaw's seen-and-heard-it-all ultrasound technician and Julio Torres' witheringly sardonic barista whose half-italicized comment gives the movie its title.

But among its unanticipated perks, I also didn't expect Beckwith's film to deliver the most sensational climactic sequence I've viewed in many, many months, a scene – one protracted shot, really – that fully protects Anna's dignity and choices and is guaranteed to leave as many viewers frustrated as elated. Loads of movie lovers hate ambiguous endings, and I'll warn you in advance that this one is ambiguous as hell. It's also among the most beautiful and honest and right things I've seen at the cineplex this year, and I certainly hope it wasn't a deal-breaker for that irrationally meaningful couple who walked into the theater ahead of me. I have no idea if those two were together together. When the movie ended, though, I'd like to believe that the wonderful time Beckwith and her team provided at least made them happy to have seen it together. 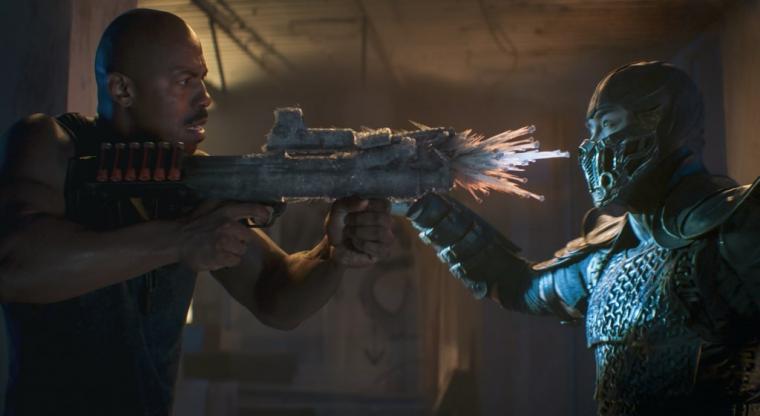 I don't play video games anymore. I don't traditionally care for video-game movies, although I do have an uncharacteristic soft spot for 2005's Doom. (Damn you, The Rock.) I didn't see the film's 1995 forebear, and am not sure that I've seen even a screen-shot of the legendary game from which it's inspired. All of that might have made me the perfect audience for director Simon McQuoid's new Mortal Kombat that just debuted at the cineplex and on HBO Max, because I had a ball at this thing. Without having a horse in this race regarding the material's accuracy and fealty, the film was just senseless and disgusting and profanely funny enough for me to have a great guilty-pleasure time without feeling the least bit guilty.

Story-wise, it's all completely inconsequential. The only thing you really need to know is that the super-powered villains of the Outworld are attempting to win their tenth straight fight-to-the-death championship against the super-powered heroes of the Earthrealm, and if they do, they win the universe. (I guess.) But while I entered the film – or rather, sat on my couch – expecting the exact same noisy non-event that was the cineplex/HBO Max Godzilla vs. Kong, I was actually glued to McQuoid's nasty action thriller from moment one.

Fire is an inherently absorbing cinematic sight, but Mortal Kombat's director proves that ice can be, too, with the freezing wrath of Sub-Zero (Joe Taslim) resulting in some wizardly visuals and a few legitimately wrenching tableaux. (The prelude gives us a beauty of one with a mother and child forever encased in crystal.) The actors may be underwhelming, but I was far happier to watch this film's martial artist Lewis Tan, the Charlize Theron lookalike Jessica McNamee, and their cohorts earnestly deliver B-movie dialogue than suffer through the misapplied technique of Kong vs. Godzilla's Alexander Skarsgård, Rebecca Hall, Kyle Chandler, and company. (Truth be told, Tan jumping over a fence and cementing his landing with a somersault – all without the aid of a stuntman – constituted better “acting” than anything GvK provided.) Josh Lawson, as the laser-eyed Australian redneck Kano, was this genre's rare “hilarious” asshole whose uncouthness actually was pretty hilarious. And for someone exhausted by the bloodless spectacle of most Hollywood blockbusters, I relished the unapologetically over-the-top splatter-fest of this video-game adaptation, with entrails spilling as easily as milk and one character gruesomely, unforgettably split in half by a hat that doubled as a chainsaw. Bonus points were earned, by the way, for McNamee effectively doing a slide-show on the long history of Mortal Kombat warfare and Tan telling her, “They spelled it wrong.” No explanation for the capitalized “K” is given. But I'm not at all dreading the experience if the rationale is revealed in a sequel.