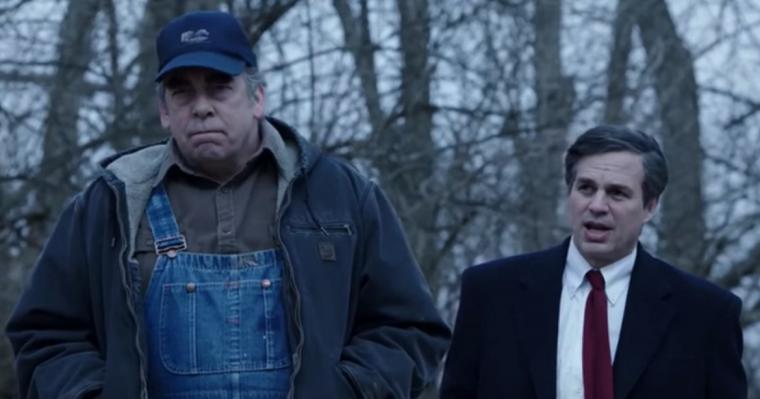 At one point in Todd Haynes' Dark Waters, the heroic attorney played by Mark Ruffalo finds himself in a traffic jam, and as he surveys the gridlock through his windshield, he notices a single red balloon floating above the stopped cars. And we all know what that portends, right? A-a-a-a-aa!!! It's Pennywise! Hide the children!

Of course, the murderous clown from It doesn't actually appear in Haynes' legal thriller, the true-life tale of corporate lawyer Rob Bilott and his decades-spanning battle against the DuPont company for its illegal, immoral disposal of toxic waste in rural West Virginia. Yet the symbolism of that red balloon shouldn't be ignored. Dark Waters might, in almost every significant way, follow the template of the environmental-activist drama familiar from Erin Brockovich, in which a dogged protagonist risks career and family in order to expose a public-health crisis and the callous Big Business executives whose only motive is profit. Yet for much of its length, Dark Waters is more accurately a horror movie, even going so far as to open with a tense scene involving skinny-dipping in the summer of 1975 (which, you'll recall, is exactly how Jaws started). Pennywise may not be on the loose, but that doesn't mean the chemicals used to make Teflon pans aren't trying to kill you.

When Haynes' latest is really working, which is most of the time, it's as a smart, sane, frequently scary fight-the-power procedural, with Ruffalo ideally, if somewhat predictably, cast as a contented professional – a corporate lawyer prized for defending chemical companies – whose eyes are gradually opened to the evil machinations of fat-cat CEOs. The deliberate pacing is occasionally too leisurely for the film's good, and the script by Matthew Michael Carnahan and Mario Correa is effective without being terribly interesting; it ticks off its expected genre beats with competence but little distinction. Yet Haynes stages a number of slow-boil frights – a poisoned cow preparing to charge, a paranoid sequence set (where else?) in a shadowy parking garage – with nervy skill, while the director's frequent cinematographer Edward Lachman lends an evocative, overcast gloom even to office scenes lit by overhead fluorescents. (It feels like Bilott is under a cloud of encroaching doom wherever he goes.) And with expert character work provided by Tim Robbins, Bill Pullman, Mare Winningham, and the incomparable Bill Camp, the only major annoyances in Dark Waters come from the dull, formulaic domestic scenes involving Bilott and his wife Sarah – a fretful, nagging, ambulatory cliché played by Anne Hathaway with typically popping eyes and a river's worth of tears. Just last week, in reviewing the legal thriller The Report, I bemoaned the one-note nature of Adam Driver's government wonk and his complete lack of a visible personal life. Ruffalo's truth-seeker, though, has been given a personal life in spades … and I would've much preferred it if he, too, were an obsessive loner in a basement. 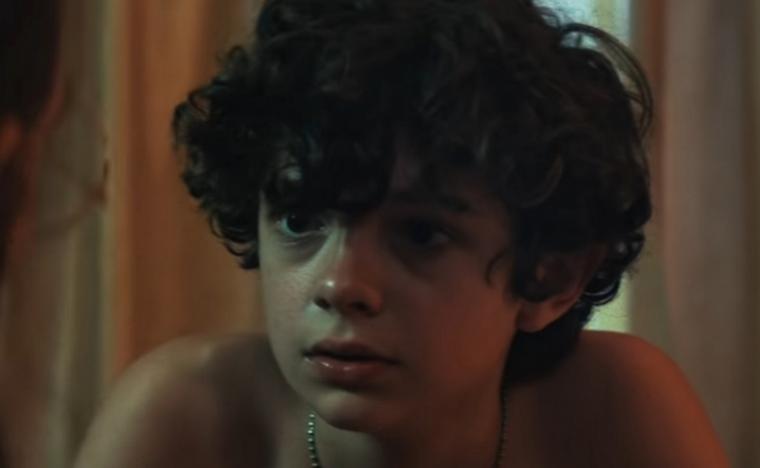 Noah Jupe is only 14 years old and has only been a recognizable film actor for a couple of years. But I think I now look forward to his movie appearances the way I (used to?) look forward to Daniel Day-Lewis', because good God is this kid amazing. As the lead in George Clooney's dismal Suburbicon from 2017, he was the lone performer reminiscent of an actual human being, and that same year, he was stunningly real as the grade-school best friend of Wonder; it somehow made perfect sense when the narrative's focus shifted away from Jacob Tremblay's facially deformed hero and landed on Jupe's Jack Will. Add to these a sensational turn as the terrified boy of A Quiet Place and a moving one as Christian Bale's hero-worshipful son in Ford v Ferrari (the rare role that lets the native Brit speak with his natural English accent) and it's possible that Jupe might one day be Daniel Day-Lewis – a feeling affirmed by the young actor's breathtaking work in the current Honey Boy. An autobiographical drama written by Shia LaBeouf that lays all the blame for the actor's very public bad behavior on his abusive father, director Alma Har'el's feature debut is only gripping – only bearable, really – when Jupe is on-screen playing the 12-year-old version of LaBeouf himself. The rest of the time it's merely a painfully unpleasant exercise in celebrity navel-gazing, though staring at one's own navel for 90 minutes would be largely preferable to the frustratingly repetitive hour-and-a-half spent here.

Honey Boy had its reported origin as a therapy assignment while LaBeouf was in rehab, and let's be clear: I think it's inspiring that the actor was able to channel his evidently deep anger and depression into a project that brought him some peace and led to his current sobriety. I'm not entirely convinced, however, that it was necessary for anyone beyond LaBeouf and his rehab counselors to be exposed to it. Much of Har'el's visual design is dreamy and evocative, and she elicits first-rate performances from an under-served supporting cast that includes Martin Starr, Clifton Collins Jr., the much-missed Laura San Giacomo, and, in her first film role, singer/songwriter FKA twigs. Yet as clearly gifted as Har'el is, she's not able to alleviate the tedium of LaBeouf's narrative, a third of which casts Lucas Hedges as Shia stand-in Otis Lort when he was a 22-year-old asshole, and two-thirds of which cast LaBeouf as Otis's asshole father James, a former rodeo clown with drug, alcohol, and angers issues of his own. Generally speaking, people who are pissed off all the time are exhausting to be around, and that's certainly the case for Hedges, who plays Otis' noxious rage and self-pity so believably that I dreaded his every appearance in the film's rehab sequences. Yet while James is granted a tad more variety, LaBeouf, too, is thoroughly tiresome as an unrepentant bully whose only mystery lies in our guessing just what's going to make him snap this time; watching the film is like watching a Mommie Dearest composed only of scenes involving wire hangers and bathroom cleansers. Thank God for Jupe, then, as he's occasionally allowed to give Honey Boy some lightness and spontaneity and texture – and even, in one astounding shot, delivers dialogue in an American accent while simultaneously juggling balls of socks tossed between him and his co-star. I will forever revere Daniel Day-Lewis, but even he never did that. 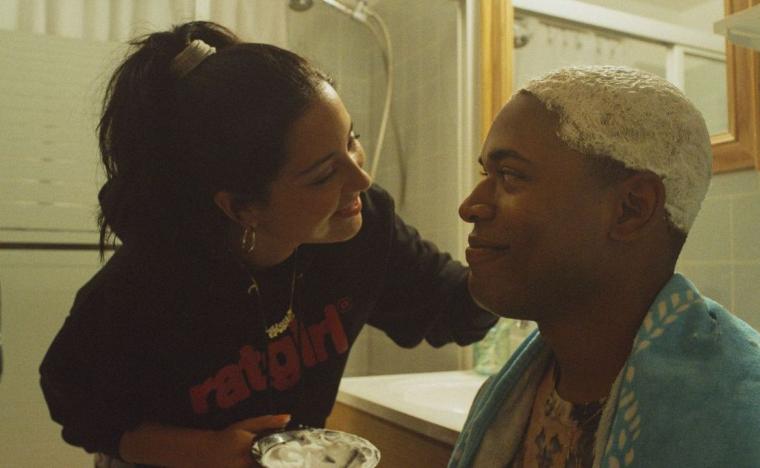 They say misery loves company, so I suppose it was inevitable that this past Friday's area premiere of Honey Boy was complemented by the area premiere of Waves, an even more wrenching family drama by writer/director Trey Edward Shults. (Coincidentally, both films also feature supporting roles for Clifton Collins Jr. and Lucas Hedges, actors whom I've recently seen with more regularity than people I actually know and love.) Yet while Shults' exercise in cinematic feel-bad is frequently a Bummer with a capital “B,” it's also searching and moving and sometimes ethereally beautiful in both visual language and emotion – the perfect antidote to the self-indulgent excesses of Honey Boy.

Although its specific storyline really shouldn't be spoiled, the film is neatly divided into halves, the first concerning the debilitating pressures placed on a high-school wrestler (Kelvin Harrison Jr.'s Tyler) that lead to an act of horrific violence, and the second following the wrestler's younger sister (Taylor Russell's Emily) as she tries to make sense of her life, and her family's future, in the wake of the tragedy. Shults' latest, the follow-up to his flawed yet fascinating horror flick It Comes at Night, is oftentimes flooded with sadness – so much so that the arrival of weeper extraordinaire Sterling K. Brown, as Tyler's and Emily's demanding father, feels less like strong, sensible casting than a fait accompli. (Brown, as is traditional, is magnificent here, as is Renée Elise Goldsberry as the kids' warm, loving stepmother.) Yet It Comes at Night star Harrison and Russell, the lead in this past January's Escape Room, are so powerfully excellent in this mostly downbeat offering that they almost force you, against all logic, to have a good time. For my money, I could have done without the constant swirling of cinematographer Drew Daniels' overly restless camera, especially in the long driving scenes, and there are some truly unfortunate lapses in narrative logic throughout. (Hurt though she undeniably is, would Emily really refuse to answer the texts of her increasingly terrified parents, particularly considering the heartbreak they just endured?) Yet Waves is absolutely worth seeing, and deeply respecting, for Harrison's thunderous channeling of teenage confusion, rebellion, and isolation, as well as for Russell's gorgeously crafted reticence as it slowly gives way to a desperately welcome ebullience of spirit. I'm not sure I'll ever want to watch the film again. But I'm absolutely grateful – not least to those who book area releases – for the chance, on the big screen, to have seen it at all.

For reviews of Marriage Story and Playmobil: The Movie, visit “Divorce, American Style.”