The Beach Is Back: “Baywatch” and “Pirates of the Caribbean: Dead Men Tell No Tales” 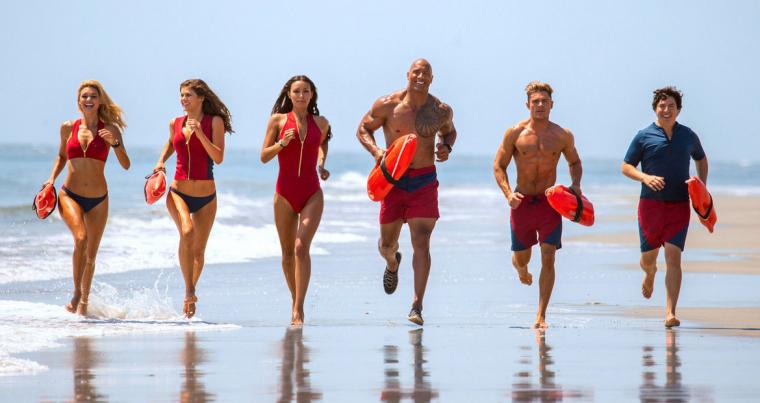 Well, there’s at least some good news regarding the TV-to-film reboot Baywatch: It’s only about 40 minutes long. The bad news, however, is that its maniacally employed slow-motion stretches those already-empty minutes to almost two full hours. Of course, it wouldn’t be Baywatch without slow-mo, and in a couple of instances – with the arrival of the movie’s title and the climactic cameo by a series favorite that’s spoiled for us in the opening credits – the effect is even handled with tongue appropriately in cheek. Mostly, though, its use just serves to elongate what is already a pretty endless affair. Bad is bad; this thing is bad cubed.

After my screening, I told a friend the film was terrible, and his response was simply “Duh.” But really, it didn’t have to be like this. While director Seth Gordon may still have to live down the dismal Identity Thief, he also helmed the first Horrible Bosses and some fine episodes of Modern Family, The Office, and Parks & Recreation. And although its previews hardly inspired The Rock-solid confidence, there was reason to hope this action-comedy vehicle for Dwayne Johnson and Zac Efron might at least boast some of the 21 Jump Street movies’ self-aware, satiric zing – that it would poke fun at its inspiration with ease, charm, and a distinctly modern sensibility. Unfortunately, this was hope in a vacuum. Gordon’s update may not be as astoundingly wretched as the recent CHIPS, but it, too, shows almost zero interest in sweetly trashing a “dramatic” progenitor that’s more than ripe for parody, and makes the disastrous mistake of treating its TV-corn shenanigans with undue sincerity. Despite the show having a long, lucrative life in syndication, Baywatch’s first season actually aired on NBC, which was also the birthplace of CHIPS. Please, Hollywood, I beg you to stop before you get your rebooting mitts on Remington Steele and Quantum Leap.

It’s been decades since I’ve seen an episode (and only one) of star David Hasselhoff’s crime-and-jiggle-fest, and the plotting for this new Baywatch didn’t seem out of step with what we’d get on TV: Johnson’s lifeguard supreme Mitch Buchannon trains a trio of new recruits, one of them Efron’s disgraced Olympic swimmer; a slinky über-villainness (Priyanka Chopra) sips champagne in between drug- and real-estate-related murders; a local cop (Yahya Abdul-Mateen II) gets on Mitch’s ass for interfering in police business. Yet even if the authors’ names weren’t revealed from the outset, Baywatch’s piddling narratives and their development are of such committee-based blandness that you’d somehow just know it took all of six screenwriters and/or “story by” contributors to make them happen. Watching a Baywatch for its story, though, is like reading Hustler for its articles, and the lack of anything interesting on-screen here has nothing to do with blueprint. It’s all execution, and despite the genuine charisma of its leading men, the execution is wanting at best.

Judging by how few truly successful ones we seem to get, comedies may currently be harder to pull off than any other film genre. Yet it’s an intensely forgiving genre; you can detest almost everything about a movie and still leave happy and grateful that you got a few laughs courtesy of, say, Keegan-Michael Key in Let’s Be Cops, or Kate McKinnon in anything. Baywatch doesn’t even offer this sort of tiny pleasure. You may smile at the bits with Abdul-Mateen and Hannibal Buress, but the actors aren’t around long enough – or aren’t comically forceful enough – to make lasting impressions, and the material given to second bananas Jon Bass, Alexandra Daddario, Kelly Rohrbach, and Ron Huebel just makes it look like they’re uncomfortable and flailing. (Ilfenesh Hadera, who has significant screen time as Johnson’s lifeguarding partner, isn’t allowed a single funny – or even “funny” – moment in the entire film.)

Johnson and Efron, meanwhile, may get the theoretically hilarious wisecracks, comebacks, and insults – with Johnson, at one meta-point, nicknaming Efron’s character “High School Musical” – but they’re required to be steadfast and sentimental nearly as often as they’re allowed to be sardonic. Comedy looks great on both actors, even if Efron should now be required to wear his comedy on top of a shirt, as the musculature of his torso has somehow become more freakishly cartoonish than Johnson’s. Neither performer, however, lends the film any personality or sense of character beyond their long-established screen types, and the duo’s practiced repartee never seems instinctual; Baywatch’s stars are mere mouth- and body-pieces for the routinely witless badinage and life-saving on display.

So what do we get amidst the tedious storytelling and pleasantly unimpressive cast and all that slow-motion objectification? A lot of laughably bad CGI, for starters, with every effect involving fire, water, and fireworks – basically every effect period – an awkward bummer. There’s the requisite, post-Fast & the Furious treacle about “family,” complete with an obligatory final scene of our heroes laughing and loving and bonding over outdoor food and booze. (I was half-surprised that Mitch didn’t offer a salute to Paul Walker’s Brian O’Conner, just for the hell of it.) There’s a lot of sadly protracted nerdiness involving Bass, who’s like a poor man’s Dan Fogler, who was already a poor man’s Jack Black. There’s some nominal fun in noticing what may be intentional casting echoes, with Chopra resembling a more mature version of Efron’s High School Musical co-star Vanessa Hudgens, and Daddario bearing a more-than-passing resemblance to series regular Yasmin Bleeth. (Daddario’s character is one of the trainees who makes the beach-policing team, and nepotism may have been in play, as Daddario was Johnson’s daughter in 2015’s San Andreas.)

And good Lord but there are jokes involving dicks, and not the kind played by Johnson and Efron. Bass gets his woody stuck in a wooden deck chair, with Rohrbach in the position of trying, and failing, to dislodge it. Efron lifts a corpse’s penis to investigate underneath – an action undertaken only so Johnson can preserve the moment for Instagram. A beach artist making a sand replica of Mitch is instructed, by Mitch himself, “Don’t hide my bump.” (Half-amusingly, Mitch is treated with even more god-like reverence than Johnson’s character in Moana.) And when Daddario walks in on Bass showering, and he turns to face her, the woman stares at his swimsuit area with unmistakable awe, suggesting that – based on our previous view of his boner – the guy is a definite show-er, not a grower. How fitting, in retrospect, that this Baywatch should be so fixated on junk. 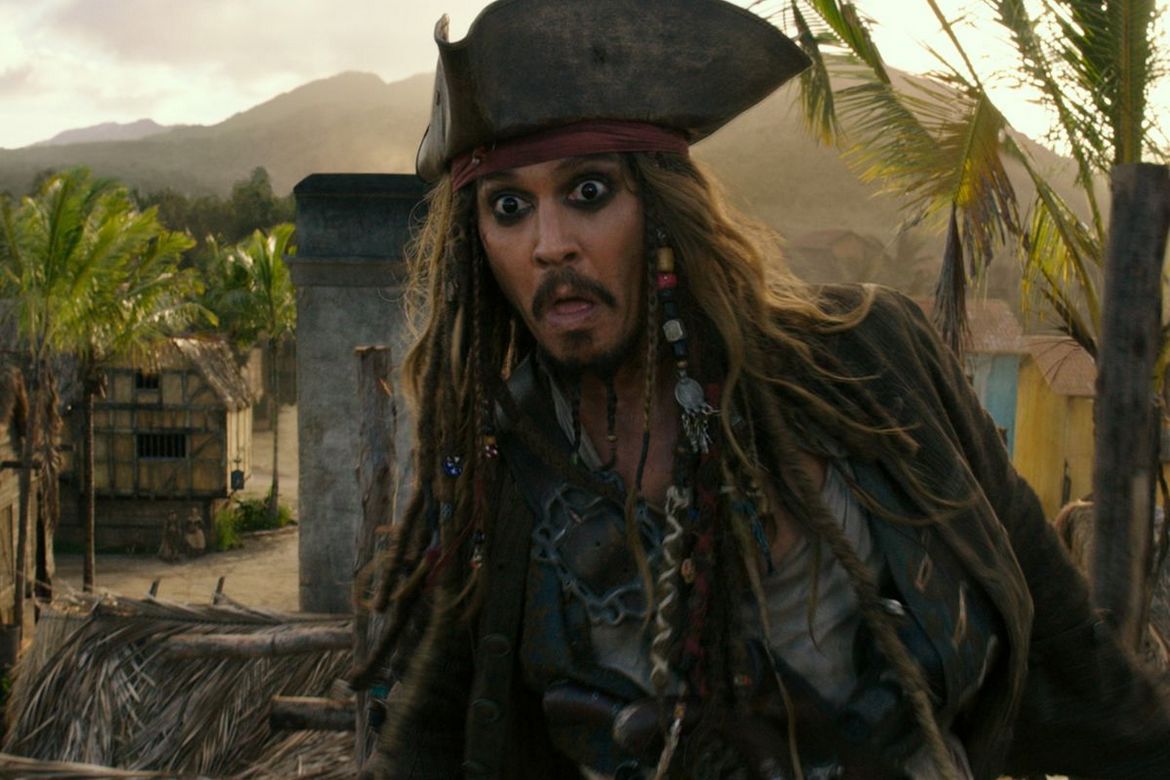 PIRATES OF THE CARIBBEAN: DEAD MEN TELL NO TALES

If possible, the latest entry in the Pirates of the Caribbean franchise – which reached its nadir with 2011’s abysmal On Stranger Tides – boasted even less-immediate appeal than a re-jiggered Baywatch. Could anyone still be remotely interested in watching Johnny Depp slur his way to an easy paycheck, yet again, simply by signing a contract, showing up, and doing his best impression of an ambulatory bottle of gin? Based on my impressively well-attended screening on Friday afternoon, the answer is apparently “absolutely.” The shock of Pirates of the Caribbean: Dead Men Tell No Tales, however, is that it was so frequently enjoyable for someone – namely me – who previously felt content to see this series forever buried within the oceanic confines of Davy Jones’ locker. It’s easy to pinpoint the ways in which this new endeavor fails: the narrative slimness, the production bloat, the undisguised repetition. Yet when it’s really working, the movie still provides a wholly satisfying blast of big-screen bombast that the current sequels to Guardians of the Galaxy and Alien don’t. Call it tactile bombast.

As with Baywatch – and most Pirates yarns, for that matter – the story here is practically superfluous, having to do with the search for Poseidon’s trident and Javier Bardem’s nefarious spirit Captain Salazar seeking revenge for his and his crew’s deaths at the hand of a young Jack Sparrow. (Just like in the latest Guardians, Depp is given the young-Kurt Russell treatment in a flashback sequence, but the effect, happily, is far more polished here.) And I outright loathed Dead Men Tell No Tales in its first 15 minutes – an excruciating prelude in which it was too dark and misty to make sense of even rudimentary action and plot developments – and much of its last half-hour, given the usual onslaught of busy and fundamentally dull CGI chaos. Ah, but what sweet sights there were in between, especially if the mere sight of gargantuan, three-dimensional creations in crumbling motion is enough to momentarily renew your faith in overpriced Hollywood spectacles.

This particular Pirates was always going to have something going for it so long as Depp delivered his traditionally blotto line readings with a fair degree of panache, which he does, and those Oscar-winning hams Bardem and Geoffrey Rush attacked their seafaring roles with fiendish relish, which they do. (Keith Richards, meanwhile, might steal the show with his reappearance as Sparrow’s dad, as the man is given at least three solid punchlines over 60 seconds and delivers them spectacularly.) Yet while the film’s headliners are generally terrific, and franchise newcomers Kaya Scodelario and Brenton Thwaites portray their ingénues with unexpected aplomb, the movie is at its most enjoyable whenever the on-screen images – both large-scale and subtle – appear so physically present that you feel you could literally touch them. (I’m saying this, by the way, without the “benefit” of seeing the film in 3D, and I’m thrilled I didn’t, as I can only imagine how murky the prelude might’ve looked with those eyeglasses further darkening things.) With Norwegian directors Joachim Rønning and Espen Sandberg doing their best combined approximation of Gore Verbinski, the early robbery of a bank – an entire bank – was a well-extended, fantastically choreographed hoot, as was the sequence in which Sparrow was saved from imminent execution, the resulting, topsy-turvy mayhem suggesting the world’s most malevolent carnival ride. The eventual re-launch of Sparrow’s Black Pearl ship, while funny, also had a gut-level realness to it, as did the film’s absolute best sight gag: Sparrow, standing atop a gate, falling four feet down, face-first, into a puddle of mud.

Whatever visual trickery was added in post-production, all of these scenes and moments, with their practical-effect know-how, are dependent on the tangible and the physical – old-Hollywood elements (like those employed for Verbinski’s 2013 The Lone Ranger) that CGI too frequently makes irrelevant. Yet the frequently ingenious visuals in Rønning’s and Sandberg’s series-extender make even the obviously computer-enhanced feel uniquely present; 3D glasses or no, you feel like you can see actual waves rippling through Salazar’s post-mortal coif, and feel like you could easily touch those ashy, floating remnants of his skin. It isn’t all great, and the blockbuster-minded oppressiveness makes the movie feel quite a bit longer than its actual two hours. But more than a fair share of Dead Men Tell No Tales is a legitimate, wildly unanticipated delight. It also would’ve been an incredibly instructional one for the team behind Baywatch in its presentation of special guest stars. Not to give away Pirates’ easily predicted yet honestly emotional final minutes, but this is how you deliver a franchise cameo.