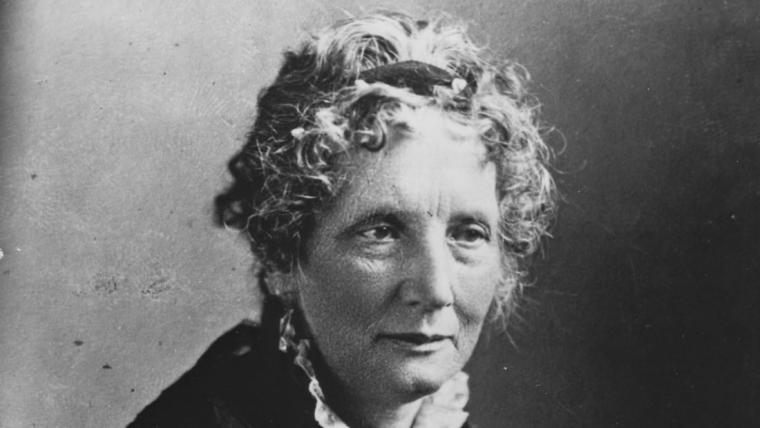 A special cinematic event in the Bettendorf Public Library's popular “Community Connections” series, the February 18 screening of Becoming Harriet Beecher Stowe by local filmmakers Kelly and Tammy Rundle will explore how the author and abolitionist's life-changing experiences contributed to her best-selling book Uncle Tom’s Cabin, and how the historical icon's anti-slavery sentiments expressed themselves in what would become America’s most influential novel.

With first installments of the book published weekly beginning in June of 1851, Uncle Tom's Cabin delivered an emotional portrayal of the effects of slavery on individuals, immediately capturing the nation's attention. Stowe showed that slavery touched all of society beyond the people directly involved as masters, traders, and slaves, and her novel added to the debate about abolition and slavery, arousing opposition in the South. Within a year, based on the publication's staggering success, 300 babies in Boston alone were named Eva after one of the novel's characters, and a play based on Uncle Tom's Cabin opened in New York. Southerners eventually responded with numerous works of what are now called anti-Tom novels, seeking to portray Southern society and slavery in more positive terms. Many of these were bestsellers, although none matched the popularity of Stowe's work, which set publishing records

The 30-minute documentary Becoming Harriet Beecher Stowe was partially funded by a grant from the Ohio Humanities, a State affiliate of The National Endowment for the Humanities, and the film features writers, historians, and storytellers including Joan Hedrick, the Pulitzer Prize-winning author of Harriet Beecher Stowe: A Life. Moviemakers Kelly and Tammy Rundle of Fourth Wall Films have been producing, writing, directing, and editing documentaries and other media projects for over 25 years, and are the recipients of numerous Mid-America Emmy nominations and film-festival awards. Their 2017 film The Barn Raisers premiered at the Putnam Museum and was an official selection at Southern California's Newport Beach Film Festival in Southern California, and the duo's additional documentary credits include River to River: Iowa's Forgotten Highway 6, Letters Home to Hero Street, Country School: One Room – One Nation, Movie Star: The Secret Lives of Jean Seberg, Lost Nation: The Ioway, andVillisca: Living with a Mystery. Clips from the Rundles' Emmy-nominated docudrama Sons & Daughters of Thunder are also included in the February 18 documentary screening, including scenes featuring area performer Jessica Taylor as a young Harriet Beecher.

Becoming Harriet Beecher Stowe will be screened in the Bettendorf Public Library's virtual “Community Connections” series at 2 p.m. on February 18, and will be followed by a Q&A with filmmakers Kelly and Tammy Rundle. The free event will be presented via Facebook Live on Fourth Wall Films' Facebook page, and more information is available by visiting BettendorfLibrary.com and FourthWallFilms.com.