Belle and Whistles: "Beauty & the Beast" and "The Belko Experiment" 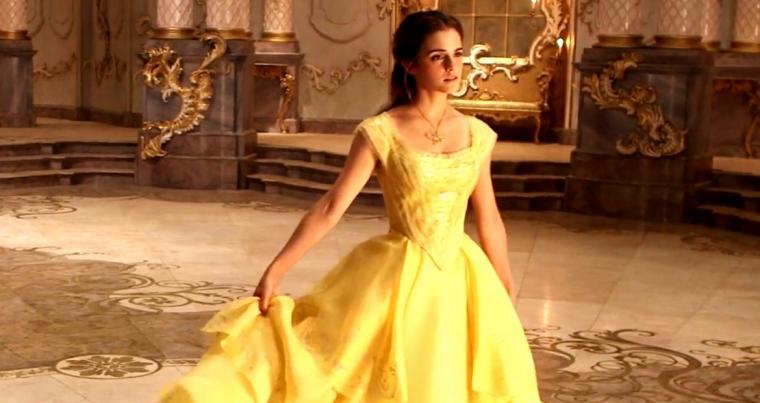 Emma Watson in Beauty & the Beast

I’m a little astounded by how many friends and family members, knowing I saw the movie, have subsequently asked, “Is it good?!?” I mean, c’mon – of course it’s good. It’s Disney’s Beauty & the Beast, for Pete’s sake. If it wasn’t 40 minutes longer than its predecessor, it could almost be a shot-for-shot remake à la Gus Van Sant’s Psycho. (Granted, maybe not the best equivalent.) What I’m hoping those loved ones were actually asking is “Is it good on its own?!?”, to which I’d respond with an only marginally qualified “yes.” Beyond Josh Gad’s LeFou being more stereotypically gay than that Alabama-drive-in protest implied, there are scant few surprises in this “re-imagining,” even if I never imagined, in my wildest dreams, any movie being cool enough to end with the smiling visages of Audra McDonald and Stanley Tucci. Yet Condon’s outing is, on its own terms, a wholly satisfying cash grab for the Mouse House – a family entertainment that will all but inevitably be called “handsomely mounted” and “duly reverential” without being half as boring as those descriptors suggest.

Anyone demanding a plot synopsis should seek the Wikipedia entry. As I’ve lost exactly none of you in the interim, let me say that Watson is a sweet, engaging, perfectly serviceable Belle. She’s in no way as enchanting as she was in The Perks of Being a Wallflower or The Bling Ring or the last few Harry Potters, but she’s grounded and real and delivers a great yelp of delight when confronted with the myriad books in the Beast’s library; while Watson’s singing may only approach the level of, say, Emma Stone’s, she’s a lovely cartoon come to life. (My biggest gripe with Watson here is that she watches the extravagant “Be Our Guest” number with a look suggesting, at best, mild amusement; you’d think someone so accustomed to green-screen acting could whip up just a trifle more astonishment.) Stevens makes for a rather bland prince – as was the cartoon guy – yet a first-rate Beast, suitably combustible and yearning, and fabulous with the new throwaway lines that screenwriters Evan Spiliotopoulos and Stephen Chbosky (Watson’s Wallflower scribe) have provided. Beast’s solo “Evermore” might throw the movie’s devotees a bit off their game. Its inclusion, however, shows off Stevens’ vocal chops, and results in the most visually inventive number in the film, with Beast climbing higher and higher stories of his tower to view the departing Belle as she rides off into the distance. 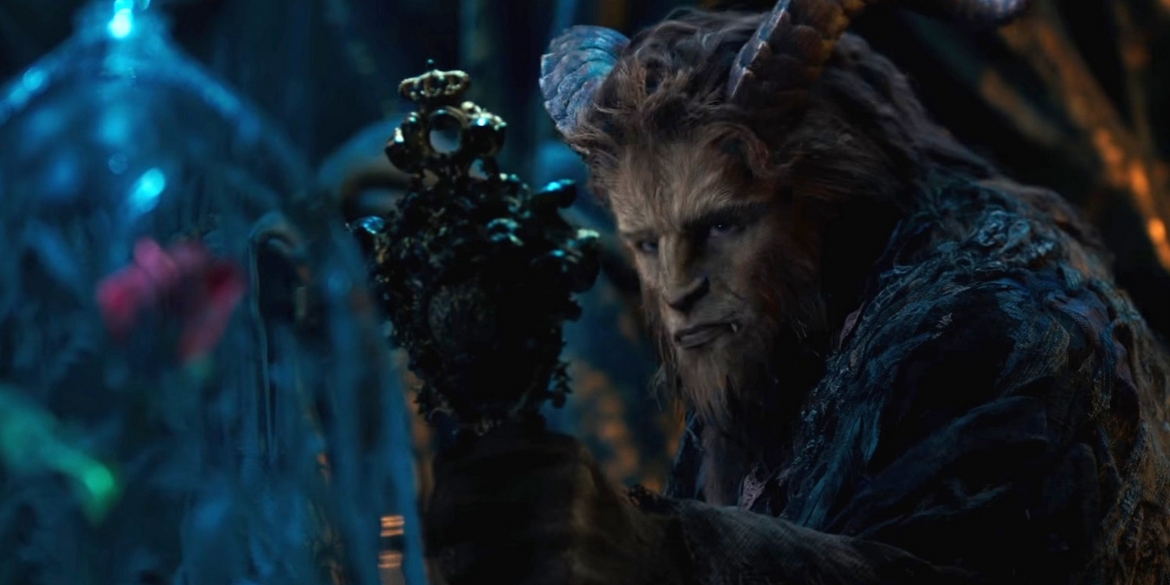 Imagination, unfortunately, is what’s sorely lacking in this dispiritingly faithful Beauty & the Beast. Heaven knows the costumes and production design are exquisite, and the visual effects are frequently fun, what with all those ambulatory tchotchkes and Jungle-Book-y wolf attacks and so on. But the director of Dreamgirls still can’t seem to direct a rousing musical number unless Jennifer Hudson is at the center of it, and she isn’t among this film’s cast. Likely no one could screw up the plaintive gorgeousness of the title tune with poor staging, and Condon, blessedly, doesn’t, as he simply apes the same shots from the animated film. But songs such as “Belle” and “Gaston,” here, are incredibly busy without showing a lick of musical-editing ingenuity, and even the theoretically can’t-miss “Be Our Guest” turns into an empty spectacle with little rhythm or purpose. It’s probably impossible for a director, in a live-action film, to replicate the exacting cuts of an animated work; Baz Luhrmann came close in Moulin Rouge!, and even those effects were frequently discombobulating. Yet for a musical, and quite unlike its 1991 inspiration, Condon’s movie doesn’t boast a musical eye. Listening to the songs, you hear the cuts in your head, and they almost never match up with the ones on-screen.

But still: Yes, it’s good. So long as Condon followed the blueprint letter by letter (and it appears he’s done little but), it couldn’t not be. And for those of us hoping for something significantly better than good – something akin to Kenneth Branagh’s beautiful 2015 take on Cinderella – we’ll always have this new release’s supporting cast. To my mind, Kevin Kline, as Belle’s eccentric-inventor dad, not only deserves best-in-show honors for turning a literally one-dimensional goofball into a fully realized creation, but for providing him with such welcome, natural humor and gravitas; Kline is never better here, and neither is Watson, than when taking a magical, poignant journey to the Parisian site of Belle’s birth. (This is also the first time we’ve been treated to Kline’s Tony-winning singing abilities since perhaps 1983’s The Pirates of Penzance.) Luke Evans is hardly the “roughly the size of a ba-a-a-arge” Gaston of the animated film, and he’s unfairly undermined by the casting going on in our heads, as the role practically screams for Hugh Jackman. But Evans is unquestionably the strongest singer of the bunch, and his malevolent-cartoon routine plays well off Gad’s sweetly swishy LaFou, who – sorry, Alabama – is admittedly hilarious with the best of Spiliotopoulos’ and Chbosky’s added contributions. (“People say I’m clingy and I don’t know why” says LeFou while happily clinging to Gaston.)

And while their vocal performances are somewhat marred by the rather gross emotional manipulations Condon and his screenwriters have devised for the climax – manipulations that, for me, turned a guaranteed cry into a dry-eyed “Oh, come on … !” – God bless those tchotchkes. McDonald as the wardrobe Madame Garterobe. Tucci as the harpsichord Maestro Cadenza. Thompson as Mrs. Potts. Nathan Mack as her son Chip. Gugo Mbatha-Raw as the feather-duster Plumette. Ian McKellen as the tightly wound clock Cogsworth. And Ewan McGregor as the candelabra Lumière. I have issues with the needless, obviously mercenary remake that is Beauty & the Beast. But in giving McGregor his first significant singing role since Moulin Rouge!, I have to admit that Disney found a way to give me reason enough to cough up my dough. Tale as old as time. 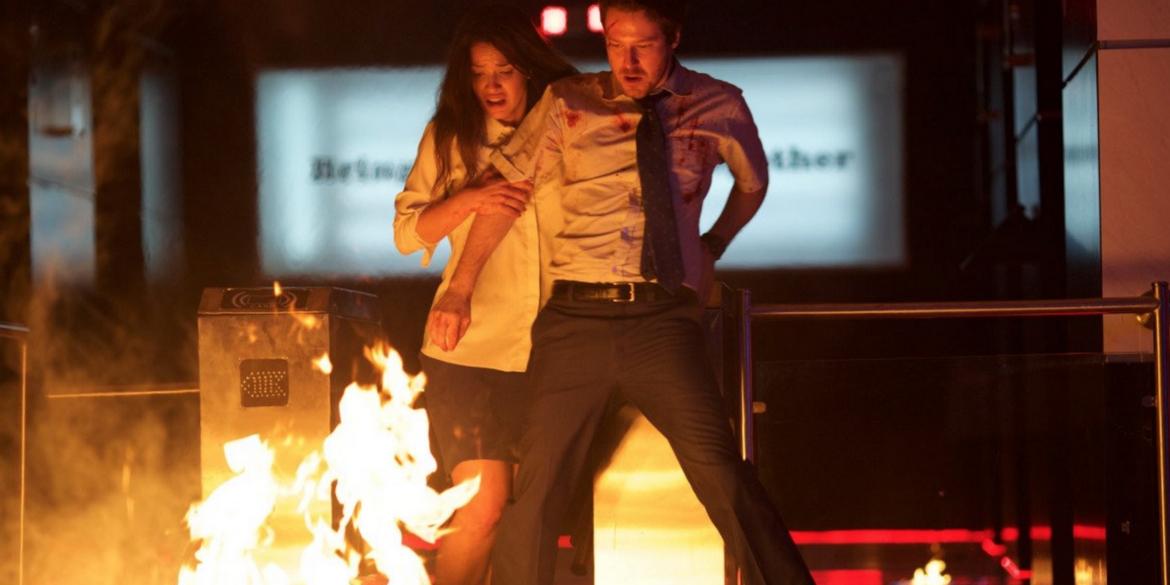 I preceded my Beauty & the Beast screening with the Blumhouse splatter-fest The Belko Experiment. And I can’t begin to tell you how grateful I am that the day’s schedule landed the way it did, because otherwise, seriously: Worst. Double. Feature. Ever. Set in Bogotá, Columbia, director Greg McLean’s and screenwriter James Gunn’s ingeniously repulsive horror flick finds 80 entrapped employees unwittingly forced to play out Shirley Jackson’s “The Lottery” when a P.A. voice on their building’s intercom announces that they must produce two corpses among the staff or face the consequences. And then, slightly later, 30 corpses. Those consequences, by the way, are the unseen controllers killing staffers themselves through convenient “location devices” implanted in employee skulls, which proves, after the first out-of-nowhere attack, to be one of the nastiest plot devices in recent fright films. Even when there are no weapons or obvious villains in the vicinity, we’re never entirely sure that someone’s head isn’t about to be blown up. You know how, in modern movies, you can no longer watch a single, standard two-shot of a couple driving in a car without worrying that some other car is going to suddenly smash into them? That’s the experience of The Belko Experiment for a full 90 minutes, and it might’ve been a more enjoyable 90 minutes if the experience itself weren’t quite so ugly.

Odd as it may sound, this is partly the fault of how well-performed it is. Throw 80 crap actors into the mix, and we might’ve had a good time seeing who gets knocked off, and how, and when. But as much as I don’t particularly care for the curated ham of John C. McGinley and Michael Rooker, they’re not untalented – and neither are the far more engaging John Gallagher Jr., Tony Goldwyn, Melonie Diaz, Josh Brener, David Dastmalchian, and others whose presences would combine for a perfectly charming Office Space reboot if not for all the exploding squibs. To McLean’s and Gunn’s possibly immoral credit, they appear to give a rat’s ass whether we like anyone on-screen, considering how many brains there are to be spewed through tracking devices, bullets, Molotov cocktails, and the random tape dispenser. (If nothing else, the film is excellent about defying genre traditions and offing characters well before you expect to see them go.) The downside, however, is that it turns everyone on-screen into mere meat for the chopping block, and whatever “survival of the fittest” themes you could conceivably attach to the movie are sacrificed in favor of well-executed but eventually exhausting viscera, simplistic moralizing, inappropriate jokiness, and strong performers emoting their hearts out in fundamentally weak material. The Belko Experiment is half really engaging and half awfully upsetting, and its wittiest moment, sadly, lands in the first five minutes, when the opening credits are underscored to a Spanish rendition of “I Will Survive.” No aquí no lo haces.