Black Lives Mattering: "The Birth of a Nation" and "13th" 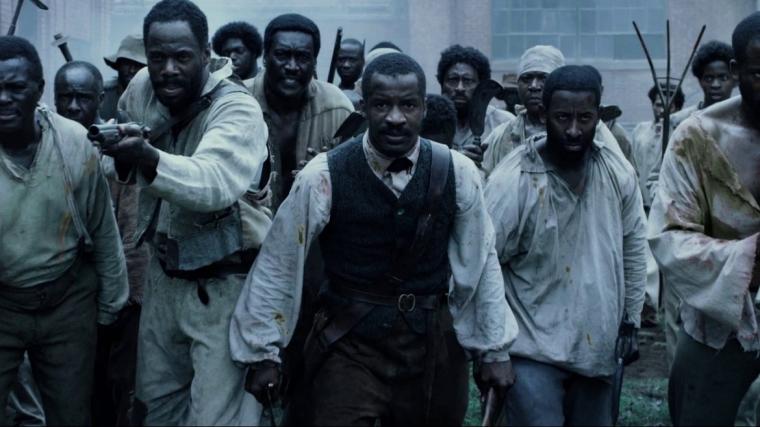 Nate Parker in The Birth of a Nation

THE BIRTH OF A NATION and 13TH

Call it a coincidence, a stratagem, a not-entirely-accidental feat of synchronized scheduling, or, for conspiracy theorists, a deliberate act of Hollywood-liberal aggression intended for political gain and societal upheaval. But whatever you call it, this past Friday not only saw the nationwide release of writer/director/star Nate Parker’s historical slave-revolt drama The Birth of a Nation, but also the Netflix debut of 13th, Selma director Ava DuVernay’s documentary on the escalating incarceration, and “lawful” killing, of African-American men. Both films boast many moments of startling clarity and power. Both films, as you might expect, explicitly state that black lives matter. But one of them also argues, to its occasional detriment, that one particular life may have mattered more than others.

That film would be The Birth of a Nation. Already controversial for sharing its title with the 1915 D.W. Griffith masterpiece that’s also a deeply racist endorsement for the KKK, the Sundance Film Festival winner became newly controversial this summer when 1999 rape allegations against Parker (who was acquitted) resurfaced after it was discovered that his accuser committed suicide in 2012. There’s more to the story than needs to be detailed here, but in any event, it’s made Parker and his movie’s release somewhat incendiary – far more so, it turns out, than Birth of a Nation itself. In his account of real-life revolutionary Nat Turner – following him from his childhood in Africa to his incitement, as an enslaved pastor in Virginia, of a doomed 1831 rebellion – Parker, as both screenwriter and director, follows a rather conventional blueprint. There are occasional flashes of visual poetry, such as the ear of corn that bleeds red and Turner’s memories of his tribal upbringing, and some beautifully shot tableaux in the Virginia cotton fields. Yet nearly beat for beat, this undeniably well-meaning achievement, with its solid but unexceptional TV-movie rhythms and succession of archetypes, is sadly lacking in surprise, which almost inevitably results in a lack of real outrage. Only a monster could fail to be horrified by the physical and emotional violence inflicted on Turner, his wife Cherry (a luminous Aja Naomi King), and their fellow slaves. Being legitimately moved, however, requires more than a filmmaker’s strict adherence to an easily predicted narrative arc, and for too much of Birth of a Nation, I also felt Parker holding back – determinedly making the experience less alienating, or at least less uncomfortable, for a potentially off-put audience. (Parker even stages, with maximum awkwardness and distastefulness, a slavery-era version of a Meet Cute, with Turner visibly falling in love with Cherry while the woman stands on the auction block.)

Yet my biggest issue with the film is that while I was eager to see Turner’s story told, I didn’t necessarily want it to be the only story told. There are fine performances by Armie Hammer, Colman Domingo, Jackie Earle Haley, Penelope Ann Miller (who’s never been this good), Mark Boone Jr., a wordless Gabrielle Union, a shattering Roger Guenevur Smith, and numerous others. But you have to catch their greatness quickly, because Parker’s camera is so routinely focused on Parker – usually center-screen, frequently backlit with an angelic glow (with heavenly-choir underscoring to match) – that this testament to Turner’s legend is oftentimes indistinguishable from a case of ego run amok. He has fine moments as an actor, but Birth of a Nation’s auteur also never lets you forget who its true star is, often at the expense of those doing equally brave but less aggressively showy work. Nat Turner’s tale is eminently deserving of a movie. Especially considering its title, it’s additionally deserving of a more democratic one. In contrast, DuVernay’s 13th offers a veritable symphony of voices, perspectives, and experiences. Beginning, ironically enough, with footage from Griffith’s Birth of a Nation and discussion of how that hate-fueled silent classic instilled in white America a century’s worth of fear and distrust, DuVernay gives us, with thrilling momentum and force, an exploration of how a black male born today has a one-in-three chance of being eventually sent to prison. That’s an appalling statistic, and one made more concretely terrifying through DuVernay’s incensed yet rational presentation of events – Griffith leading to Jim Crow leading to Nixon leading to Reagan’s war on drugs leading to Bill Clinton’s “three strikes” policy – and her staggering assemblage of talking-head interviewees.

Some, such as political activist Angela Davis, are expectedly eloquent; some, principally Newt Gingrich, are almost shockingly so. (Gingrich on how punishment for crack abusers, in the 1980s, was designed to be harsher than it was for cocaine abusers: “It was an enormous burden on the black community, but it also fundamentally violated a sense of core fairness.”) But nearly all of the dozens of recruited pundits speak with marvelously frank, unadorned conviction on the de facto loophole in the Constitution’s 13th Amendment that slavery and involuntary servitude shall not exist except, quote, “as a punishment for crime whereof the party shall have been duly convicted.” Meaning, in essence, that slavery can, and does, still exist. Birth of a Nation addresses slavery head-on, and the flawed but admirable film’s adherence to historical and period detail wholly convinces us that “this happened then.” DuVernay’s enlightening and infuriating 13th travels a different, much-riskier avenue: “This is happening now.”