Blades of Glory: “Knives Out” and “Queen & Slim” 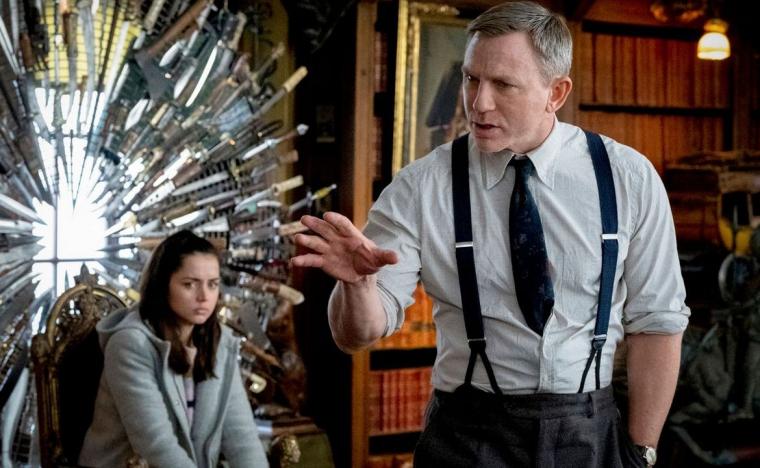 Ana de Armas and Daniel Craig in Knives Out

Knives Out, the star-studded comic whodunit by writer/director Rian Johnson, debuted the day before Thanksgiving, and for just over two hours, the film is what every Thanksgiving spread strives to be: loaded with familiar elements (some presented in delectable new ways), utterly delicious, and enormously satisfying. It's a holiday feast, though, without the tryptophan hangover. While you certainly feel worked over by Johnson's insanely clever cinematic puzzle, you never feel overwhelmed, and not long after devouring it, you may find yourself more than ready for another helping.

On the morning after a party celebrating his 85th birthday, the renowned, über-wealthy mystery author Harlan Thrombey (Christopher Plummer) is discovered, in one of the upper levels of his sprawling Victorian-style mansion, lying on a settee with his throat slit. All signs point to suicide: no forced entry, no apparent struggle, no bloody footprints. Harlan's family is consequently surprised – aghast, actually – when, a week after the funeral, a pair of local detectives (LaKeith Stanfield and Noah Segan) request the clan's participation in a homicide investigation initiated by celebrity sleuth Benoit Blanc (Daniel Craig). An old-school Southern dandy with an accent dripping of molasses and mint juleps, Blanc received an envelope stuffed with cash and an unsigned message to dig deeper into the case. And with a lineup of potential murderers this rich, in every definition of the term, that proves to be a juicy assignment indeed, for both Benoit and the Knives Out audience.

Before we're even 20 minutes into the movie, we learn that on the night before his slaying, Harlan had verbal altercations with several Thrombeys and extended Thrombeys that provided motive to kill for nearly every party guest. Harlan planned to fire son Walt (Michael Shannon) from his job as their publishing company's CEO, ending the gravy train for Walt, his wife Donna (Riki Lindhome), and their teen son Jacob (Jaeden Martell). He cut ne'er-do-well son Ransom (Chris Evans) out of his will. He threatened to reveal that son-in-law Richard (Don Johnson) was cheating on Harlan's real-state-mogul daughter Linda (Jamie Lee Curtis). He discovered the embezzlement scheme of daughter-in-law Joni (Toni Collette) and promised to end college-tuition payments for her daughter Meg (Katherine Langford). The only one with nothing to benefit from Harlan's death, it would seem, would be the man's devoted caretaker Marta (Ana de Armas), who lives her lower-middle-class existence with an undocumented mother – meaning, naturally, that Marta becomes the finger-pointing Thrombeys' chief suspect. “Immigrants,” says Richard during his interrogation. “We get the job done!” 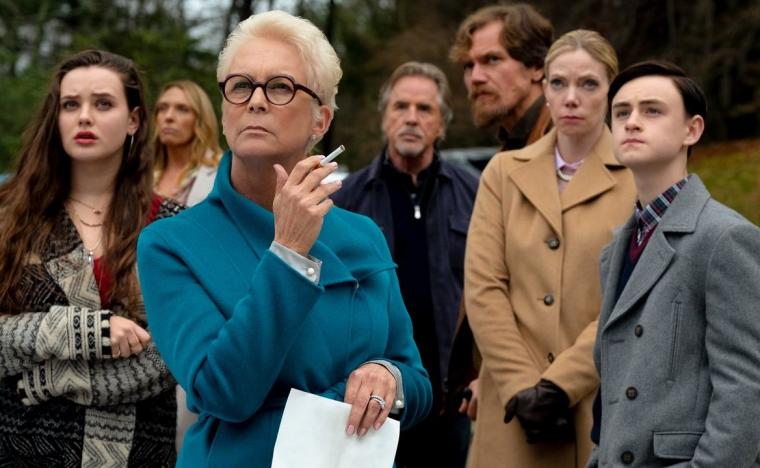 Hamilton fans will immediately get the allusion, as does Blanc. (“We saw it at the Public,” says Richard with no end of moneyed-liberal pride.) But rather than coming off as self-conscious – a smug nod to the Knives Out creator's own droll wit – that line becomes part of Johnson's whole, brilliant tapestry in which the trappings of wealth, status, and “good breeding” are employed to deflect attention from interior ugliness, callousness, and a fundamental emotional poverty. There are references to tweets, and The New Yorker, and a tweet about The New Yorker. We gets mentions of influencers and Juuling and Edgar Wright's Baby Driver. As with many current family get-togethers, no doubt, there's a fierce political debate, with one Thrombey calling another “snowflake” and being told, in turn, “Oh, take off your red cap!” These are characters who live not just proudly but obsessively in the moment – young Jacob can barely take his eyes off his iPhone – and that wouldn't be so terrible if it didn't mean that, in the process, they chose to ignore the old-school virtues Harlan tried to instill in them: loyalty, decency, empathy. Thankfully, though, civility does still exist in Knives Out. It's there in Blanc's courtly manners and determination to uncover the truth. It's there in the honorable matter-of-factness of Stanfield's Detective Lieutenant Elliot and Segan's gushing fanboy Trooper Wagner. And it's there in the selfless, put-upon Marta, which is why it's so astounding when, a half hour into the film, we discover … .

Nope. You ain't getting that out of me. And I've probably already said too much. But I will add that after Johnson plops a major narrative shock into the mix a quarter of the way through the picture, he isn't remotely done with dropping our jaws, whether through unexpected narrative turns or callbacks to seemingly inconsequential bits of business, or sometimes merely through a perfect line of dialogue you'll want to quote all week. (I may never have heard a more flawless explanation of a will reading than Benoit's resigned “It's like a community-theatre production of a tax return.”)

I'll further add that I can't remember the last movie I saw that, from top to bottom, was this much unbridled, popcorn-entertainment fun. The actors are all dynamite, and so well-matched in their uniformity of purpose that picking a favorite would be a true fool's errand. The pacing is swift without ever seeming manic – even in the rare excursion outside the mansion walls that one character accurately describes as “the stupidest car chase I've ever seen.” The tchotchke budget must have numbered in the high six figures at least, with the delirious production design more than enough reason for second, third, and fourth viewings. And in an absolute rarity for its genre, everything about the plot – and I mean everything – snaps into place with such precision, and such beautiful inevitability, that end-credits applause wouldn't be the slightest bit unwarranted. Rian Johnson is a fiendishly smart and dexterous filmmaker, and I'm still kind of joyously amazed that Knives Out wound up being this sharp.

Director Melina Matsoukas' love-on-the-run drama Queen & Slim is fantastic – for all of five minutes. Those would be its first five minutes, in which we're introduced to the title characters (played by Jodie Turner-Smith and Daniel Kaluuya) as they suffer through a terrible Tinder date making awkward small talk and discovering, over 300 excruciating seconds, that they have practically nothing in common. During this sequence, the actors are terrific and the conversation is enjoyably pointed, and even though the couple can't stand one another, you're happy to initially be in their mutually loathing presence. Unfortunately, though, the movie continues for approximately 7,560 seconds more, and I swear I felt nearly every single one of them.

The storyline is a compelling and sadly timeless one, taking Queen and Slim, on their drive home, from a maddeningly “routine” pull-over to Queen being shot in the leg by the racist cop to said cop being accidentally killed to the couple fleeing the scene and becoming, due to social-media coverage of the incident, outlaw folk heroes – “Black Bonnie and Clyde” as one character refers to them. Yet from that first roadside shooting on, nothing that happens in screenwriter Lena Waithe's feature-length conceit plays as remotely believable: not the “comedic” detours as our heroes deal with mouthy skateboarders and psychotic gas-station attendants; not the “poetic” interludes as Queen loses her dreds and Slim learns to ride a horse; not even the “romance” that develops between the ill-paired leads who share no discernible chemistry, with their backwoods sex scene intercut with images of a downtown protest that ends in an act of horrific violence. Waithe, alongside Aziz Ansari, won a writing Emmy for Netflix's Master of None. But despite its undeniable relevance and necessity, Matsoukas' whole movie comes off as a misguided sitcom episode with its farcical elements played bizarrely for tragedy, with even the considerable contributions of a spectacular Bokeem Woodbine not enough to make the well-intentioned mess worth sitting through. Queen & Slim appears so divorced from reality that it even gives us Chloë Sevigny living in apparent wedded bliss with Flea of the Red Hot Chili Peppers, and even that's not the most ludicrous thing about it.

For reviews of The Irishman and The Report, visit "House Painting."