The Blind Leading the Blond: “Don't Breathe” and “Mechanic: Resurrection” 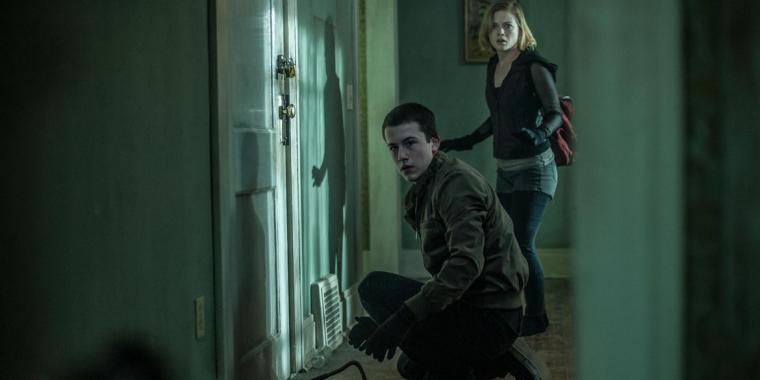 A few weeks ago, in the creepy and clever horror film Lights Out, our protagonists were at the mercy of a nightmarish figure they couldn’t see. In writer/director Fede Alvarez’s new horror film Don’t Breathe, our protagonists are at the mercy of a nightmarish figure who can’t see them. You’d presume these particular protagonists would have an easier time of things. But Alvarez, to his credit, doesn’t appear interested in making things easy for anybody – not for the “heroes,” not for the “villain,” and not for audiences accustomed to those tags presented without quotation marks. You may find your stomach in knots during much of this brutally effective shocker. You may also find that part of your discomfort stems from sensing that the traumatized characters here are getting just what they deserve.

Not every scare flick, after all, opens with its leads vandalizing and robbing an upscale suburban home, with one of them also choosing to, um, ecstatically relieve himself on the living-room rug. Yet that’s how we’re introduced to Don’t Breathe’s Rocky (Jane Levy), Alex (Dylan Minnette), and Money (Daniel Zovatto), Detroit youths hoping to build a big-enough nest egg for a move to California. While the psychotic Money seems in it just for the cash and kicks, and the puppy-dog-ish Alex will clearly do anything Rocky wants, Rocky herself at least has an empathetic motive: getting her and her little sister several time zones away from their abusive parents. So when the three learn of a fortune presumably stashed in the dilapidated dwelling of a blind war veteran (Stephen Lang), one who lives many blocks from any neighbors, they decide to embark on the cinematically familiar One Last Job before retiring to the West Coast. Bad plan, guys. For one thing, the home of this unnamed veteran (end-credited as simply “The Blind Man”) is less a house than a lower-middle-class fortress replete with locks and chains on the doors and bars and boards on the windows; all it needs is a moat. For another, the vet owns a growling, fang-baring Rottweiler who suggests the unholy spawn of Cerberus and Cujo. And for yet another, the man proves incredibly functional, and incredibly dangerous, in the dark ... and Rocky, Alex, and Money aren’t even all that swift in the light. (Seriously, people: Sometimes it’s actually imperative that you turn your phones off.) I really don’t want to spoil Don’t Breathe’s particulars, partly because the film’s trailer already does a pretty awesome job of spoiling them. But while the movie is rather beautifully filmed, with one early tracking shot providing a marvelous and necessary geographical layout of the house, Alvarez and co-screenwriter Rudo Sayagues are to be especially commended for so effectively muddying our rooting interests. Even when the kids are imperiled inside the house, they’re still, stupidly, trying to get away with the money. And even when The Blind Man is on a rampage, he’s still (a) a guy whose house was broken into (b) who lost his eyesight in the Gulf War and (c) lost his only daughter to vehicular manslaughter. Who exactly are the heroes and villains here?

It eventually becomes all too apparent, and if 90 percent of the proceedings are enjoyably intense, the other 10 – the percentage that concerns The Blind Man’s hideous secret in the basement – are merely unpleasant. That’s hardly a deal-breaking ratio, however, and beyond the excellent performances of Levy and Lang, there’s plenty here for genre fans to love: the long, deathly quiet of the veteran sightlessly surveying his surroundings; the unconscious youth lying on a slowly cracking skylight; the unexpected return of that charming pooch whom we’d mistakenly thought was napping. Most satisfying of all is the achingly extended, black-and-white sequence after The Blind Man kills the electrical power, with two of our panic-stricken thieves fumbling in the cellar like Clarice Starling at the climax of The Silence of the Lambs. It may be titled Don’t Breathe, but on more than a dozen occasions in this first-rate fright film, it’s more like Can’t Breathe. In Mechanic: Resurrection, Tommy Lee Jones is like a human firecracker dressed for a pajama party. Portraying a sheltered and decidedly eccentric arms dealer, he enters the proceedings late (really late) in the movie with red-tinted glasses, a flowing silk robe, linen attire, slippers, two earrings in his right ear, and a soul patch, and his outré look and singularly loopy readings suggest an actor having an enormous amount of fun with the table scraps he’s been thrown. I wish I could tell you the name of Jones’ character, but according to the spellings we’re shown, he’s either “Max Adams” or “Max Adam” (based on the on-screen possessive “Max Adam’s”), and this blend of laziness and ineptitude is pretty emblematic of director Dennis Gansel’s unwarranted sequel. The plotting couldn’t matter less: It’s just Jason Statham, in his first film appearance since his brilliant self-parody in last summer’s Spy, easily outrunning machine-gun ammo and dispatching random stuntpeople, and yes, it ends with the expected mano a mano slugfest and a ticking red clock. But Jones is there, briefly, as are a quite-good Michelle Yeoh and an initially charming Jessica Alba, and one execution in a skyscraper’s outdoor swimming pool delivers some solid Mission: Impossible-esque enjoyment. I didn’t hate Mechanic: Resurrection. But at this point in the graying star’s career, Statham doesn’t need more ultra-violent, adequate-at-best action thrillers clogging his résumé. He needs more Melissa McCarthy.