Bold News Is Good News: “The Post” and “Proud Mary” 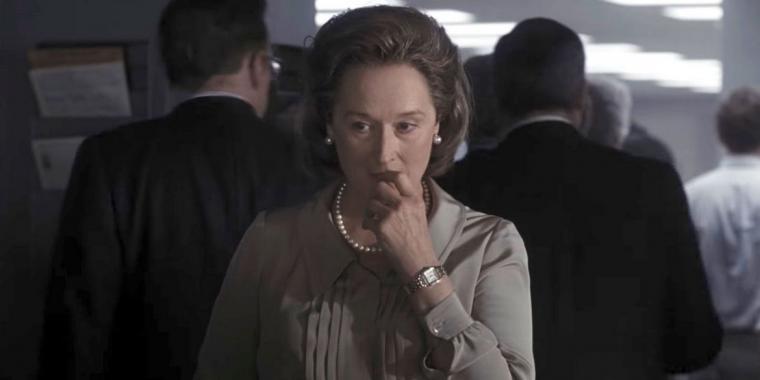 Steven Spielberg's The Post is the director's eagerly anticipated drama about the 1971 publication of the politically explosive Pentagon Papers, and when I think back on the film, I most readily recall, with considerable pleasure, three particular scenes.

The first is a breakfast meeting between Washington Post publisher Katharine Graham (Meryl Streep) and executive editor Ben Bradlee (Tom Hanks) in which the colleagues make friendly small talk and discuss Tricia Nixon's impending wedding, and Bradlee, sensing that Graham has overstepped her managerial bounds, tells his boss, “Keep your finger out of my eye,” leaving her crestfallen and silenced. The second is a shareholder's meeting for which Graham has been well-prepped, but when the time comes for her to speak to the otherwise all-male assemblage, she merely stares at her yellow legal pad with visible insecurity and shame, and lets one of her advisers do the talking. And the third is a long closeup of Graham on one end of a late-night conference call, where the decision about whether to publish 4,000 pages of classified documents regarding Southeast Asia hangs uncomfortably in the air, and Graham's expression is a whirlwind of conflicting thoughts right up until she gives the green-light with a breathless “Yes, go – go go go go go go” and decisively hangs up.

I think it's apparent what all these scenes have in common, and for my money, the greatest thrill of The Post lies in Meryl Streep's extraordinarily thoughtful performance, which also happens to be the subtlest and quietest one she's given since The Devil Wears Prada. When it was announced, this past March, that Spielberg was rushing The Post's script (by Liz Hannah and Spotlight co-writer Josh Singer) into production for a year-end release – designed as a response to the current Administration's frequent attacks on the press – there was question as to why the focus was going to be on the Washington Post rather than the New York Times, which was the first papers to publish excerpt from the Pentagon Papers. But the nature of Steep's role, and her exceptional portrayal, make it clear that Spielberg and his authors were aiming for a character study as much as a procedural, and when the film's focus sticks to Graham's gradual transformation from kowtowed socialite to proud defender of print journalism, The Post is a smashing success. Where it's less successful, unfortunately, is in just about everything surrounding Graham's personal struggle, effective though the film frequently is.

There are few experiences in modern movie-going as instantly relaxing as sitting down to watch a new Spielberg, because if nothing else, you know you're going to get two hours of impeccable craftsmanship and professionalism, which The Post certainly delivers. Though it takes a while for the film to get rolling, Spielberg gives his cannily edited drama a thriller's ticking-clock energy as Bradlee and his fellow journalists attempt to suss out what information the Times has and where they can get some of their own, and Hanks, despite a wobbly Boston accent, blasts through the proceedings with command and infectious vigor. Spielberg has also lined up a rather amazing ensemble, and even if they're just around as background support, it's a treat to see the screen so heavily populated with the likes of Bruce Greenwood (spectacularly reptilian as Robert McNamara), Bradley Whitford, Tracy Letts, Carrie Coon, Michael Stuhlbarg, Jesse Plemons, Alison Brie, Zach Woods, and even longtime comedy partners Bob Odenkirk and David Cross. (Our first shot in the Post offices finds Hanks being tailed by the Mr. Show co-stars, suggesting, incorrectly, that this might turn out to be American history in the form of an SNL sketch.) 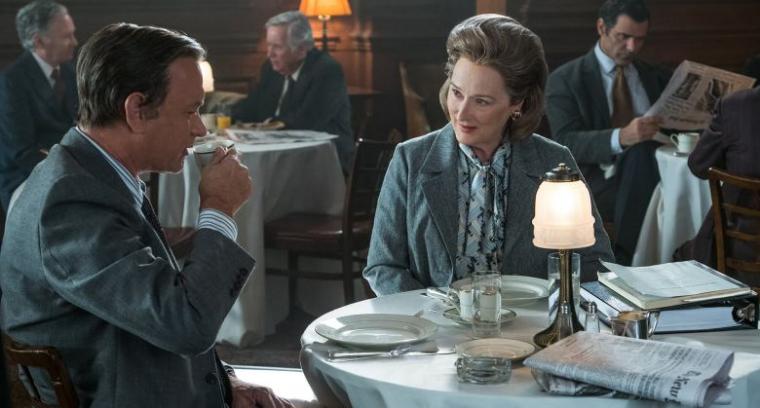 Yet despite his directorial prowess and the film's expectedly unassailable period design, Spielberg doesn't quite trust us to get the Big Pictures here, and spends so much time reminding us of his pro-journalist, pro-feminist leanings than the movie eventually feels less celebratory than obvious, and more than a little pushy. We could easily predict, for example, that the climactic Supreme Court decision backing the First Amendment would be greeted by cheering on-screen masses and the glorious blare of John Williams trumpets. In those regards, Spielberg doesn't disappoint – although it was disappointing to see so little time, like no time, actually devoted to the Supreme Court case itself. But I'm not convinced that we needed not one but two scenes of Streep's Graham wafting through seas of admiring, voiceless women for Spielberg's message to register, nor quite so many images of Graham looking overwhelmed amidst crowds of grim-faced men in dark suits. (Cinematographer Janusz Kaminski shoots boardroom sequences with such murkiness and dread you half-expect a cameo by the Phantom of the Opera.)

When Matthew Rhys' Daniel Ellsberg was sneaking folders out of a darkened office's filing cabinet, we didn't need a tight closeup on the material's “TOP SECRET/SENSITIVE” labels to understand that the papers within were indeed top secret and sensitive. We didn't need that moment with reporters gazing at a box of procured documents like they're staring into the glowing Pulp Fiction suitcase, nor the uncomfortably hero-worshiping establishing shots outside the Times building. And while it's always lovely to see her, we really didn't need Sarah Paulson, as Bradlee's wife, to be employed for the sole purpose of delivering a well-meaning but intensely stagy monologue extolling Graham's bravery, just in case any of us had somehow missed that point. The Post is entertaining and moves briskly enough, and for the first time in many a moon, Spielberg manages to find the right ending (and a single ending, to boot), with the actions of this 2017 release leading irrevocably into the actions of 1976's All the President's Men. All told, I enjoyed the movie. But nearly the whole of The Post's 115 minutes finds Spielberg speaking through a megaphone. Streep, by contrast, is whispering. I wound up hearing Streep better. 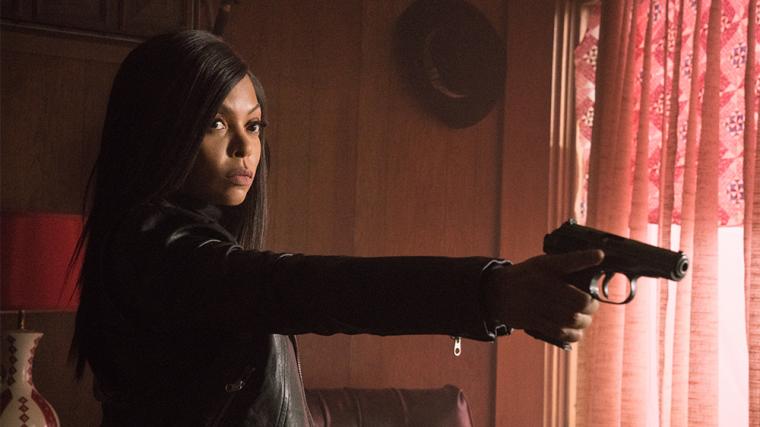 When it comes to new films debuting in January – as opposed to the previous year's Oscar hopefuls that have finally made it to our area – we've been pretty well-trained to take what we can get. Consequently, and based solely on its preview, I was more than ready to take the action thriller Proud Mary; show me Taraji P. Henson with a platinum-blond wig, a fast car, a load of weaponry, and Tina Turner wailing on the soundtrack, and I'll show you a happy guy. But while I hoped for some trashy fun with Babak Najafi's shoot-'em-up, I certainly didn't expect the movie to be … actually kind of good.

Mind you, it's not great, as this tale of a drug-cartel hit woman serving as guardian angel to a parentless boy (which is the least she could do after icing the kid's father) is nothing if not contrived, clichéd, and more-than-mildly ridiculous. Yet Henson, with her dynamic ferocity and emotional transparency, plays the hell out of this thing – few actors have quite her talent for making hack work look like the opportunity of a lifetime – and the scenes between her and Jahi Di'Allo Winston as Mary's orphaned charge are both tender and sardonically biting. You could get rid of the guns and goons entirely and still enjoy Proud Mary as an admirably earnest melodrama, and for a long while you'll kind of have to, given that the trailer's bullet-heavy assault accompanied by Tina doesn't occur until 10 minutes before the end credits. Considering the movie is only 85 minutes long, though, that's hardly an endless wait, and in the meantime, you'll be treated to a terrifically charismatic Billy Brown, Xander Berkely as a loathsome Russian Mob boss, a few excellent R&B tunes, and – oh my God – the reunion of Danny Glover and Margaret Avery, last paired together 32 years ago as Mister and Shug in The Color Purple! Are we sure Spielberg didn't direct this one, too?!

For reviews of I, Tonya, The Commuter, and Paddington 2, visit “Frozen Tears.”