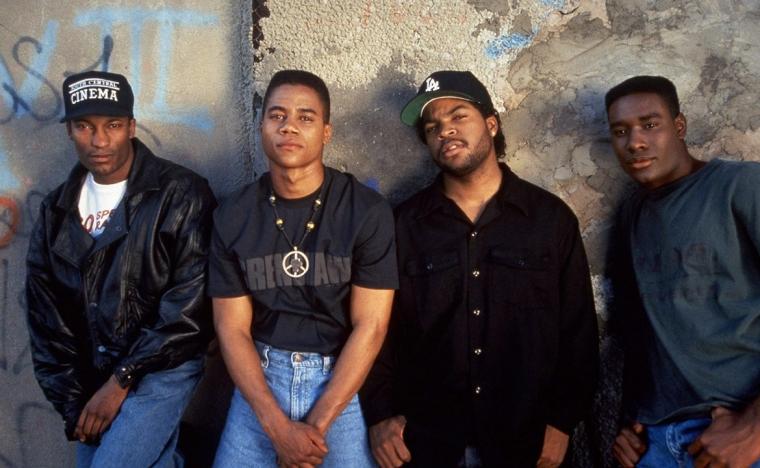 Serving as the second cinematic presentation in Fathom Events' seventh-annual TCM Big Screen Classics series, the iconic coming-of-age saga Boyz N the Hood celebrates its 30th anniversary with February 28 and March 3 screenings at Rave Cinemas Davenport 53rd 18 + IMAX, the popular drama famed for making then-24-year-old John Singleton both the youngest person ever nominated for the Best Director Oscar and the first African American ever cited in that category.

The feature-length debut for writer/director Singleton, who passed away in 2019 at the age of 51, Boyz N the Hood centers on the life of Tre Styles (Cuba Gooding Jr.), who is sent to live with his father Furious Styles (Laurence Fishburne) in South Central Los Angeles, surrounded by the neighborhood's booming gang culture. Co-starring Ice Cube, Morris Chestnut, Nia Long, Angela Bassett, and Regina King, Boyz N the Hood's title references the 1987 N.W.A. rap song of the same name, which was written by castmate Ice Cube. Singleton initially developed the film as a requirement for application to film school in 1986, and sold the script to Columbia Pictures upon his graduation in 1990. During the writing process, Singleton drew inspiration from his own life and from the lives of people he knew, and consequently insisted that he direct the project himself. Principal photography began in September of 1990, and Boyz N the Hood was filmed on location from October to November 1990.

Singleton's debut premiered in Los Angeles on July 2, 1991, and was theatrically released in the United States 10 days later. The film was an immediate critical and commercial success, praised for its emotional weight, acting, and writing, and wound up grossing $57.5 million in North America. The following year, Boyz N the Hood was nominated for Best Director and Best Original Screenplay at the 64th Annual Academy Awards, making Singleton the youngest person and first African-American in the running for Best Director. The film was also screened in the Un Certain Regard section at the 1991 Cannes Film Festival, and in 2002, the United States Library of Congress deemed Singleton's film "culturally, historically, or aesthetically significant" and selected it for preservation in the National Film Registry.

Boyz N the Hood will be screened at Rave Cinemas Davenport 53rd 18 + IMAX at 3 and 7 p.m. on February 28, and at 7 p.m. on March 3. For more information on the 30th-anniversary presentation, visit Cinemark.com, and for more on the seventh-annual TCM Big Screen Classics series, visit FathomEvents.com.