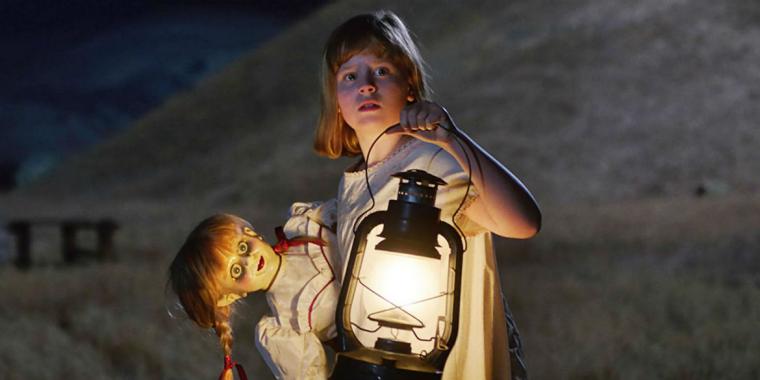 If you're a weekly reader of these reviews, you've perhaps noticed a bit of, shall we say, slacking off on my part this summer, as out-of-town visitors, a nine-day vacation, and intensely active summer-stock-theatre participation have prevented me from seeing quite a few high-profile releases. (I haven't even made it to Spider-Man: Homecoming yet. For the love of Pete! Literally!) This past weekend marked the end of that crazy-busy period. But between my availability and cineplex scheduling, I had only one opportunity to catch the rare summertime drama The Glass House, a film adapted from a massively popular memoir – 261 weeks on the New York Times Best Seller List – that stars Oscar winner Brie Larson and the generally marvelous Woody Harrelson and Naomi Watts.

Alas, as it was completely sold out, I was turned away from the 12:45 p.m. screening I needed to attend, and you're instead stuck reading a piece on Annabelle: Creation. (Hey, it was either that or The Nut Job 2: Nutty by Nature, so-o-o … . You're welcome!)

To be fair, director David F. Sandberg's horror prequel isn't terrible. In truth, it's considerably better than the creepy-porcelain-doll antics of 2014's dreadful Annabelle. It's even an improvement over last summer's The Conjuring 2, whose 2013 precursor gave us our first look at the franchise's titular “character”: a house-dressed Chucky with dead eyes and blond braids. But while it would be easy to over-praise this genre outing merely for not sucking, Annabelle: Creation still emerges as only moderately effective at best – a late-summer chiller that finds a demonically possessed plaything the only truly believable thing about it.

As its title promises, we do indeed get to see Annabelle's creation, with Anthony LaPaglia's dollmaker Samuel Mullins – in what appears to be the rural Midwest of the 1930s – hand-crafting the first in a limited series of toys for apparently awful children. Annabelle's prototype, however, is a gift for Mullins' grade-school daughter Bee (Samara Lee), and a gift promptly locked away after the child runs into the street and is killed by a passing car. (Between this and Twin Peaks: The Return, I'm now going to reflectively shudder every time I see a kid even near traffic.) Cut to 12 years later, the sprawling farmhouse owned by Mullins and his bed-ridden wife (Miranda Otto) now an expansive den of dust-covered memories – until, that is, the arrival of a young nun and six parentless girls, who've been invited to help turn the Mullins' home into a welcoming area orphanage. It's a miracle! It's a godsend! It's … ! Hey, what's behind that locked door … ? 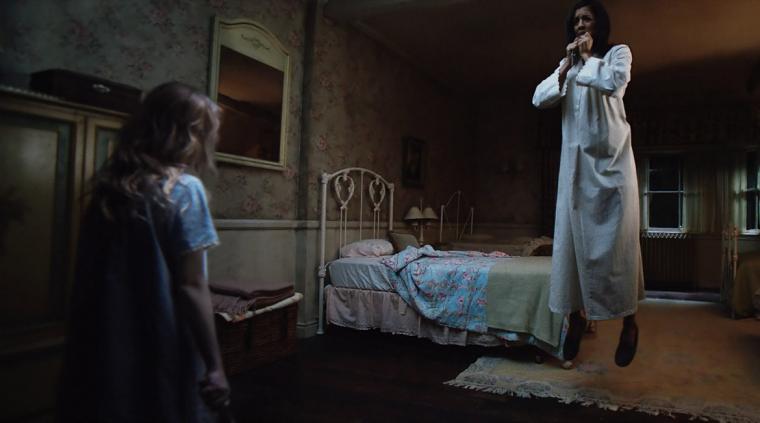 Obviously, the orphanage angle is just an excuse, and a pretty flimsy one, to provide Annabelle with a bunch of fresh female souls to terrorize and potentially inhabit, the most likely victims being Janice (Talitha Bateman), a polio sufferer in a leg brace, and her best friend Linda, a wide-eyed cutie played by Lulu Wilson. (Genre fans know to expect bad times when this tyke is around, as the gifted Wilson also played Eric Bana's daughter in 2014's Deliver Us from Evil and the evil/adorable conduit in last fall's excellent Ouija: Origin of Evil.) Flimsy or not, though, the setup occasionally works. Sandberg, who showed enormous scare-flick promise a year ago in his Lights Out debut, knows how to present creaking doors, slow walks through darkened rooms, and intentionally out-of-focus background figures for maximum tension. He demonstrates a real flair for sustained, in-your-face frights as his camera closes in on seemingly benign yet haunting images, be they Punch-and-Judy hand puppets or a stereotypical ghost under a bed sheet. And Annabelle: Creation certainly looks great, with cinematographer Maxime Alexandre's nighttime photography – particularly during Linda's outdoor run with Annabelle in one hand and a kerosene lamp in another – suggesting an especially Grimm fairytale.

My only problem was that I didn't buy a moment of it. Barring the solid presences of LaPaglia and Otto, no one on-screen feels legitimately of the 1940s, and the four young actresses playing Janice's and Linda's fellow orphans don't even feel human, the eldest two coming off as vacuously snippy post-war Mean Girls, and the middle two forgettable to the point of utter superfluousness. (The gorgeous Stephanie Sigman, as the girls' guardian Sister Charlotte, is like a present-day supermodel recruited for a postulant-themed calendar spread.) Screenwriter Gary Dauberman's dialogue isn't remotely period, either, unless teens and tweens of the time did indeed calm their nerves by saying “We just freaked ourselves out!” and reacted to an ugly sight with a pointed “Ew, gross.”

Yet beyond the movie's lack of fidelity to its era, where's the fidelity to basic narrative sense? Silly though it was, Lights Out at least allowed its characters to react honestly to their supernatural conundrums, and the film, generally speaking, played by its established rules. It's unfathomable, however, that the grown-ups here – certainly Sister Charlotte, but even the mysterious Mullins spouses – would treat the girls' mounting anxiety and significant injuries with such nonchalance. (Even though horror-flick protagonists are required, maybe by law, to never actually leave their haunted residences, wouldn't frail little Janice have been carted off to a hospital immediately after her devastating “accident”?)

And the movie's rules, so to speak, seem to be in the process of being made up on the spot. It's one thing to have a demon either inside or in close proximity to that eerie little porcelain thing. By the finale, though, it appears that said demon is either three demons, or boasts a previously unreferenced ability to replicate itself, simultaneously taking possession of an orphan, a scarecrow, and half a corpse in different locales at the same time. (Sandberg delivers a few jolts, but their effect is diminished when you take even a half-second to reflect on what corkscrew logic allowed him to pull them off.) Ultimately, my Annabelle: Creation screening proved far less frightening than the five minutes that preceded it: An extended preview for the Stephen King adaptation It involving poor little Ralphie's introduction to that hideous sewer-dweller Pennywise. I may eventually regret my It excitement (25 days to go!), but given the underwhelming 105 minutes that followed that teaser, these days I'll take whatever scare-flick satisfaction I can get.