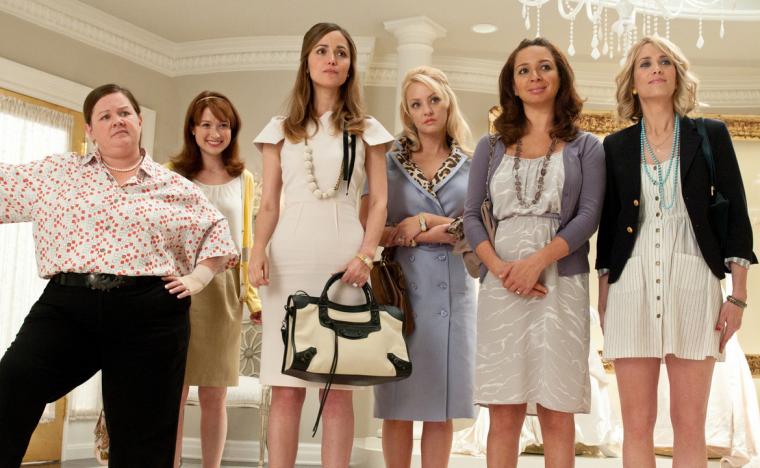 One of the millennium's most successful and beloved film comedies enjoys a 10th-anniversary return to the big screen when Fathom Events and Rave Cinemas Davenport 53rd 18 + IMAX host June 6 through 10 screenings of Bridesmaids, the 2011 smash that earned rave reviews and Academy Award nominations for screenwriters Kristen Wiig and Annie Mumolo and breakout co-star Melissa McCarthy.

Directed by Paul Feig, produced by Judd Apatow, Barry Mendel, and Clayton Townsend, and budgeted at $32.5 million, Bridesmaids centers on Annie (played by co-screenwriter Wiig), who suffers a series of misfortunes after being asked to serve as maid of honor for her best friend Lillian (Maya Rudolph). McCarthy, Rose Byrne, Ellie Kemper, and Wendi McLendon-Covey co-star as Lillian's bridesmaids, with Chris O'Dowd, Rebel Wilson, Matt Lucas, Michael Hitchcock, Jon Hamm, and Jill Clayburgh – a two-time Oscar nominee in her final film appearance – in supporting roles. Actresses Wiig and Mumolo wrote the script after the latter was cast in Apatow's 2007 comedy film Knocked Up, and upon its opening release in the United States and Canada on May 13, 2011, Bridesmaids was an immediate commercial success. The film made $26 million in its opening weekend, eventually earning over $288 million worldwide, and surpassed Knocked Up to become the top-grossing Apatow production to date.

Feig's movie also received rave reviews upon its release, with particular praise reserved for Wiig's and Mumolo's screenplay and McCarthy's fearless performance. The review aggregator Rotten Tomatoes reported that 90 percent of critics gave the film a positive review based on 291 reviews, with the site's critical consensus stating, "A marriage of genuine characters, gross out gags, and pathos, Bridesmaids is a female-driven comedy that refuses to be boxed in as Kristen Wiig emerges as a real star." In December of 2011, the film went on to be nominated for Golden Globe Awards for Best Motion Picture and Best Actress – Musical or Comedy, and in early 2012, it was Oscar-nominated for Best Supporting Actress for McCarthy and Best Original Screenplay for Wiig and Mumolo. This made Bridesmaids the first Apatow-produced film to be nominated for any Academy Awards.