Bring Back That Lovin' Feeling: “Top Gun: Maverick” and “The Bob's Burgers Movie” 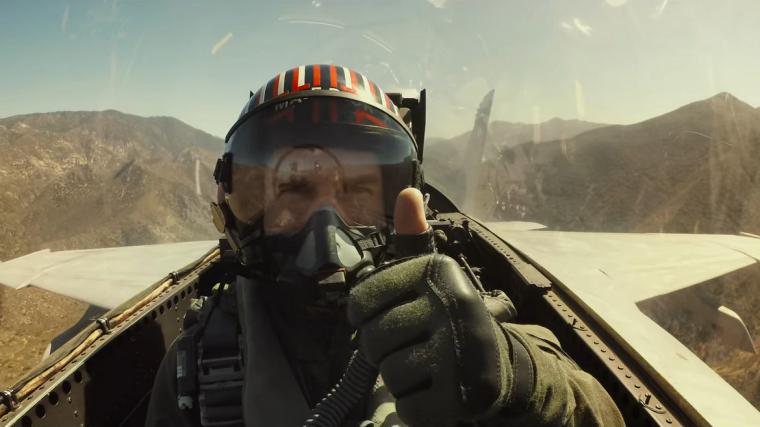 If you were alive and going to the movies in the summer of 1986, the experience of Top Gun: Maverick might be the closest you'll ever come to time travel. It's not just that director Joseph Kosinski's sequel to Tony Scott's endearingly bludgeoning Reagan-era smash recreates the original almost beat for beat. Sometimes Scott's film is even replicated shirt for shirt, as when the son of Anthony Edwards' ill-fated Goose shows up in the exact same Hawaiian print his dad once wore, and sings the exact same Jerry Lee Lewis song – “Great Balls of Fire,” in case you'd forgotten – while providing his own piano accompaniment. (Watching this moment transpire from afar, our titular hero stares in stupefaction, and why wouldn't he? Maverick thought he was re-entering the '80s of Top Gun, and landed in the '80s of Quantum Leap.)

But although Kosinski's followup opens with an explanatory crawl almost identical to the first film's, and although that exposition is immediately followed by a rash of briskly edited Naval-duty images and Kenny Loggins' “Danger Zone” blaring on the soundtrack, we're conscious from the start that it most certainly isn't 1986 anymore – and it's not even the movie that tells us so. It's Maverick himself, Tom Cruise, who obliterates the ruse, showing up in one of those “Welcome back to the cineplex!” PSAs that have been preceding screenings for a while now. As ever, the star looks eerily well-preserved for someone who'll be turning 60 soon – leave it to Cruise to be Born on the Third of July – and his omnipresent grin remains intact. Yet something's noticeably off. His generic “We made this film for you!” platitudes sound a bit unsteady, and there's little of Cruise's signature gleam in his eye, and he looks significantly older than he did in the Maverick trailers. This makes sense; principal photography on his new action drama was largely completed in 2018, and that PSA was probably shot only a few months ago. But our official welcome-back is still a rather jolting reminder that time stops for no one – not even Tom Cruise. And had Top Gun: Maverick really embraced that fact, and had its star actually embraced his human fallibility, this corny, retrograde, occasionally quite-entertaining outing might've really been something.

Instead, it settles for being fun, at least in its second half – and that's hardly the worst thing Kosinski's movie could be. Through a series of contrived incidents too ludicrous to be believed, Pete “Maverick” Mitchell winds up serving as an instructor at the same San Diego-based training center from which the Navy fighter pilot graduated those many years ago. He's there to recruit a half-dozen best-of-the-best for a perilous mission (:impossible?) involving the destruction of a uranium-producing facility run by unnamed enemies from an unnamed foreign country. One of his charges, naturally, is Bradley “Rooster” Bradshaw (Miles Teller), the son of Maverick's best friend who died in his arms, and a hothead who wrongly blames Pete for his father's death and rightly blames him for his stunted military ascent. (If, like me, you were hoping for a Meg Ryan cameo – she played Goose's wife and eventual widow – you'll sadly have to make do with a couple of flashbacks.) 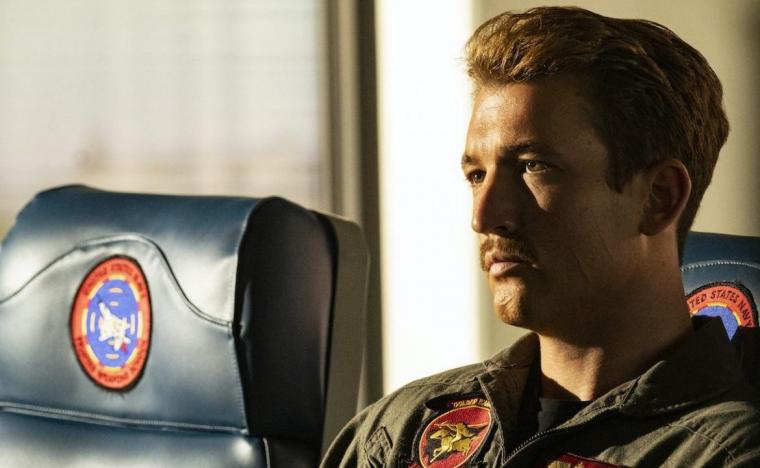 There's more, of course: Maverick's fling with a past love (Jennifer Connelly's Penny) offhandedly referenced in the first film; a touching reunion with Val Kilmer's Iceman who, like the actor himself, is now suffering from throat cancer; sweaty, chest-bumping bro time on the beach. (The touch-football sequence here is far more self-aware than the legendarily campy sand-volleyball scene from the original, and consequently, a lot less enjoyable.) But none of it really matters. The only story Top Gun: Maverick seems truly interested in telling is the tale of how Tom Cruise is, and will forevermore be, the capitalized Best of the Best – unchanging, unwavering, unkillable. Though I meant to keep track, I quickly lost count of how many times characters referenced Maverick as the fastest man on Earth and the finest fighter pilot to ever draw breath, and sadly, Cruise's familiar smugness in this role killed my interest in the film for at least its first hour. Whether Pete's flirtations are being gently shot down by Penny or he's slyly one-upping grouchy military superiors played by the infinitely more compelling Ed Harris and Jon Hamm, smirking Cruise wafts through every early scene like a man fully convinced that he's God's True Gift, and these recalls to his '86 bravado only underline how bereft of new ideas Maverick truly is. As was the case 36 years ago, the underlying message in Kosinski's sequel appears to be “If you're not charmed by Tom Cruise, there's something wrong with you.”

To his credit, at least for this non-worshiper, the actor gets less unbearable once the plotting requires that Maverick stop smiling and taking off his shirt. Yet it's a shame that Cruise, Kosinski, and their quintet of screenwriters and “story by” contributors couldn't create (or, more likely, didn't want) a more complicated, less abjectly heroic version of their central figure, because the overall quality suggests that the film could certainly have handled one. Deliberately murky politics aside, the details of that deadly mission are smartly presented and thrillingly executed, boasting some of the finest aerial stuntwork – and legit, CGI-free stuntwork – that we've been treated to in decades. Teller beautifully underplays Rooster's simmering rage and grudging respect, and his gender- and ethnically diverse team of fellow fighter pilots – played by talents including Monica Barbaro, Lewis Pullman, Jay Ellis, and the riveting Val Kilmer clone Glen Powell – are much less obnoxious than the brigade previously recruited by Tony Scott. Connelly provides blessedly mature sense and sexiness – even if, like Kelly McGillis, she's really only around to inform viewers that Maverick is neither asexual nor gay.

Plus, given its nearly fanatical insistence on delivering the precise Top Gun experience patrons got before, Maverick is just-about-perfect pre-summer escapism for viewers wishing it was the pre-summer of 1986 again, back when Tom Cruise looked invincible, and millions of fans began their 36-year tenure of believing that to be true. This particular viewer, however, isn't looking forward to another Top Gun – or even the new Mission: Impossible(s) teased during my screening's collection of trailers – so much as a sequel to that PSA starring a looking-and-sounding-his-age-at-last Tom Cruise. Now that might actually be something. 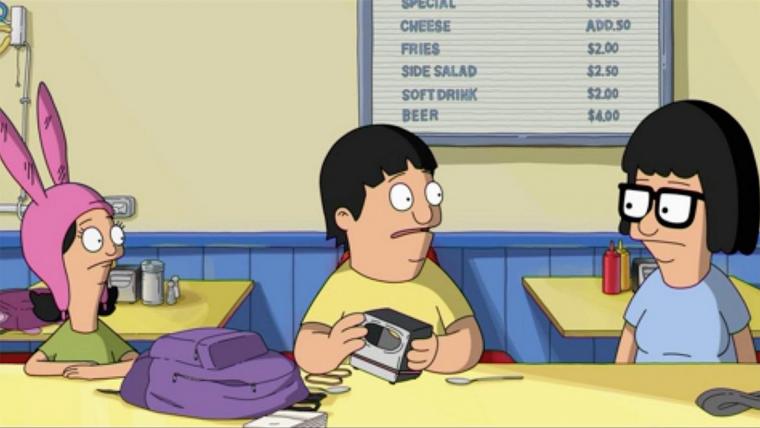 Fans of its animated-series inspiration will no doubt love The Bob's Burgers Movie. Then again, what the hell do I know? Although the Emmy-winning show has been a family favorite for my sister and her clan for years – I can show you a photo of them dressed up as the Belchers this past Halloween – I myself had never seen a single episode of the 12-seasons-running half-hour comedy before viewing directors Loren Bouchard's and Bernard Derriman's 102-minute feature. I expected to be completely confused about the goings-on, and a few significant details did confuse me. (Why are two of the female Belchers voiced by men? Is H. Jon Benjamin's patriarch Bob usually this lobotomized? Are the songs traditionally this wordy and weirdly anti-melodic?) Yet I had a decent-enough time at my cinematic introduction to all things Bob's, and quickly gleaned that this hyper-actively paced verbal and physical slapstick was wittier than the norm. So what did this newbie ultimately make of it all?

Well, I wasn't won over by John Roberts' enthusiastic mama bear Linda Belcher, who came off as a lower-middle-class version of Mike Myers' Linda Richman from SNL, and was only mildly amused by Dan Mintz's and Eugene Mirman's respective Belcher kids Tina and Gene. (The actors handled their vocal duties with speedy aplomb; they just didn't get many funny things to say.) The central storyline involving the murder of local carny Cotton Candy Dan began promisingly but turned superfluous awfully early. The three major song-and-dance numbers, with their bizarrely specific choreography, felt off-puttingly strange rather than enjoyably strange. And whether it was due to presentational/character repetition or simply weak material I don't know, but there was about a 40-minute lull in the middle of the film that generated no chuckles from me whatsoever. A lot of things were happening, but I just stared at the screen with alert incomprehension, the way your dog looks at you when you give him a thorough talking-to about why he shouldn't poop on the rug.

But. Even when Benjamin's Bob appeared nearly comatose with dread, the performer's mortified readings were things of comic beauty. Kristen Schaal's nine-year-old Louise Belcher was continually ticklish, especially when she explained how a corpse's tooth fell into her mouth: “I've tasted death.” While the visual gags were only so-so, the verbal ones kept a-comin', meaning that even if I wasn't laughing on a regular basis, I was at least smiling. And I did laugh out loud on more than a dozen occasions – partly during Louise's imagined conversations with her motley crew of stuffed animals, and mostly through the peerlessly entitled readings of Kevin Kline as boardwalk proprietor Calvin Fischoeder, with the actor giving a devastating comic spin to nearly every one of his lines. (Zach Galifianakis' Fischoeder brother Felix – who looks uncannily like a hand-drawn Philip Seymour Hoffman – is pretty great, too.) All told, The Bob's Burgers Movie didn't inspire me to catch up on 238-and-counting episodes of the Fox series. But it did wind up a perfectly passable time at the movies, and a solid-enough one to make me wish that more long-running animated TV comedies would take its lead. I've given up hope on a sequel to 2007's transcendent The Simpsons Movie. But H. Jon Benjamin is obviously still rarin' to go. Any chance of a forthcoming Archer: The Motion Picture?