They Didn't Build That Wall! : “Sicario: Day of the Soldado” and “Uncle Drew” 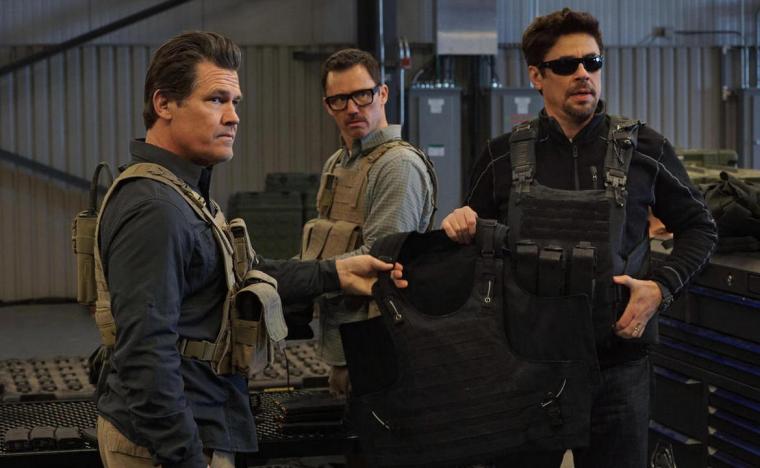 SICARIO: DAY OF THE SOLDADO

Barring only occasional exceptions, summer movies, as Hollywood annually reminds us, are meant to be escapism. But it's impossible to imagine viewers, at least U.S. viewers, being wholly able to find escape in director Stefano Sollima's action-thriller sequel Sicario: Day of the Soldado. For better or worse, our real-world problems, and our real-world administration, simply won't let us.

In Jurassic World: Fallen Kingdom, there was a quick, waggish nod toward the movie's (unnamed) president in a cable-news crawl – our commander-in-chief questioned “the existence of dinosaurs in the first place” – as well as a snide crack made when a male loudmouth, under his breath, degraded a female colleague with a curt “Nasty woman.” No one over the age of, say, 12 could possibly be ignorant about who those gags were meant to reference, and awkward and intrusive though the jokes were, a portion of my audience chuckled regardless, albeit in that hesitant “Is my laughter going to offend someone?” way that decent people sort of have to now.

Yet while our current president isn't name-dropped in Day of the Soldado, either, you can't watch the film without being reminded of who specifically is in the Oval Office, and where our national attention is being directed this very moment, right outside the cineplex walls. Certainly, there are more than enough echoes of present-day atrocities in Taylor Sheridan's script, whose primary storyline is about an apparently ceaseless influx of drugs and terrorists across the Mexican border and Josh Brolin's he-man warrior determined to solve the dilemma come hell or high water. (Sheridan, it should be noted, also wrote 2016's Hell or High Water, as well as last year's Wind River and the 2015 Sicario.) When the film, though, found close to two dozen Mexican police officers gunned down and Catherine Keener's CIA handler said of the president “He's worried about getting impeached!”, there was an unmistakable weight of discomfort in our auditorium's air. You could literally hear a pin drop.

Remember the days, not all that long ago, when you could watch a movie – especially an escapist, summertime action sequel – and a character would make reference to “the president,” and you could easily imagine a generic, make-believe version of the person holding that title? Just some well-dressed individual with a red phone on the desk who would never actually show up to scold Bruce Willis or Harrison Ford or whomever, but who was always deeply concerned about the mission at hand and worried about what it might mean for reelection plans? That imaginary figure, at present, no longer exists; President Trump has (for now, at least) shaped the American narrative so completely that Hollywood's “the president” has been stripped of quotation marks. And with daily news of families separated at the Mexican border, children taken from their parents and detained, officials demanding the harshest of punishments for traffickers of drugs and humans, and the eternally hovering threat of impeachment, there's no way to adequately enjoy Sicario: Day of the Soldado without questioning, deeply, exactly what it is we're being asked to enjoy. That isn't an inherently bad thing. In another movie, it might have been a great thing. But for all of its dramatic leanings, this impressively made, mostly gripping, ridiculously contrived outing can't support the intrusion of too much real-world thought, and probably shouldn't have had to. 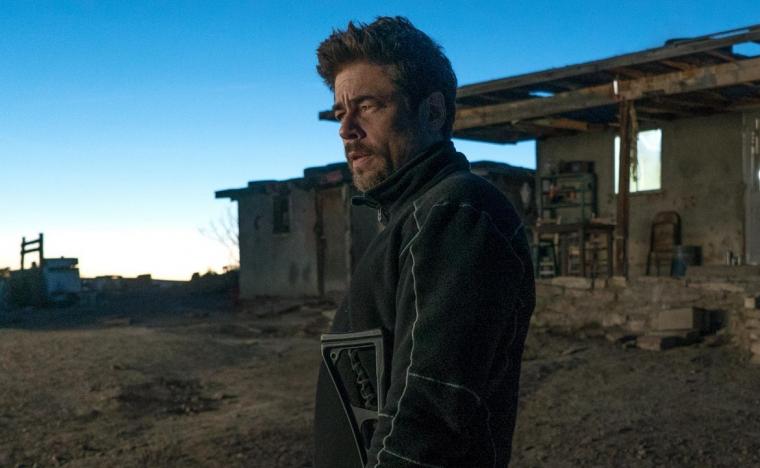 If it seems that I've spent an inordinate amount of wordage on secondary concerns while barely discussing Day of the Soldado itself, that's partly because I don't really have a lot to say about the movie – at least in comparison to how fundamentally ill-timed it feels. (Yes, the issues themselves are timely, but it's hardly the best time – if there's ever a good one – for them to be used in service of a largely silly, big-budget action sequel.) Nutshelling Sheridan's plot, it finds Brolin's federal agent Matt Graver reuniting with Benicio Del Toro's hired assassin Alejandro, and the pair shepherding a complex scheme to stall the drug war by having two rival sects of Mexican drug dealers wage war on one another. This involves the kidnapping of one czar's 16-year-old daughter Isabel (Isabela Moner), and also, tangentially, winds up involving the Mexican-American, Texas-based Miguel (Elijah Rodriguez), a slightly older teen in training to be a trafficker.

Exciting though certain sequences are – and none of them, unfortunately, is quite as terrifying as the very early scene of a suicide bombing in a Kansas City supermarket – too much of Day of the Soldado is dependent on only-in-the-movies happenstance, from Alejandro's and Miguel's first, accidental encounter to Alejandro's fluency in sign language to the miraculous resurrection that left patrons at my screening laughing in an “Oh, come on …!” way. And despite their spot-on performances, Del Toro and Moner can't quite pull off the Logan-esque bond they're meant to forge, primarily because Alejandro, in the first Sicario, was designed as such an unknowable (basically Javier Bardem in No Country for Old Men if Chigurh was on the side of the angels) that his sentimentalization here ends up cheapening the character.

Yet this uniformly well-acted film is beautifully shot by cinematographer Dariusz Wolski, Hildur Gudnadottir's score is throbbing and effective, and Sollima's car chases and brutal gunfights are delivered with nerviness and finesse. While the film doesn't have the gravitas of Denis Villeneuve's Sicario, it's also far less somber and portentous, and as much as I adore the performer, I was frankly relieved that Emily Blunt's distractingly naïve FBI agent was out of the picture. Too much of the original film, for my money, was spent with Blunt's Kate Macer dumbstruck by the disreputable actions of Graver and Alejandro. As befits this darker, uglier world, now there's no longer anyone around to be shocked.

I was also relieved that Sheridan, following his Hell or High Water and Wind River successes, managed to keep the script's tone so frequently light, especially when Graver assessed Alejandro's nearly barren apartment and correctly observed, “You'd be easy to shop for at Christmas.” (Jeffrey Donovan also provides necessary levity as Graver's bespectacled partner, who, en route to a shoot-out, assesses their perfect day: “Blue skies, large-caliber weapons … .”) Yet for all of its pluses, and even for all of its minuses, Sicario: Day of the Soldado is a wildly infuriating experience. “Build that wall!” partisans can see it as confirmation of all of their deepest fears. Those haunted by Isabel's traumatized stare can see it as an indictment of inhumane border policies. Given the film's reluctance to treat its themes as anything beyond surface entertainment, few viewers are likely to leave satisfied. 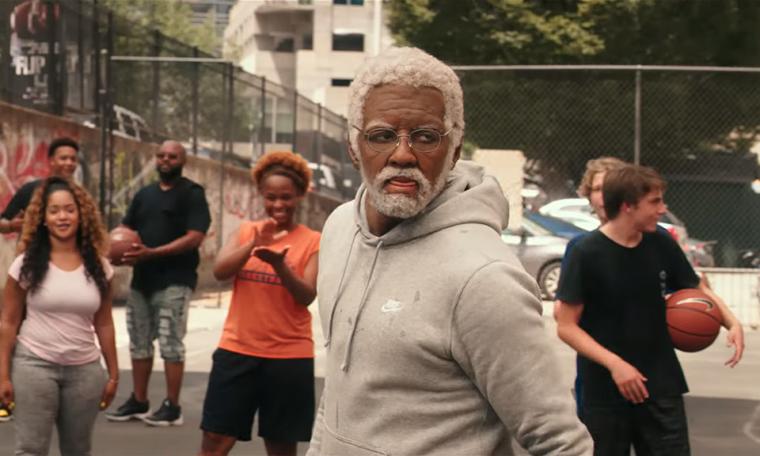 As we enter our fifth consecutive week boasting some pricey, high-concept sequel, with Ant-Man & the Wasp and The First Purge on the immediate horizon, you may wonder whether Hollywood has officially run out of new ideas. Not so! To wit: Uncle Drew, which isn't based on a previous film at all, but rather … a series of Pepsi commercials. Where has this miraculous inspiration been my whole life?! Can you imagine the dollars and fun that might've been generated by a feature-length version of that tear-jerking “Wow – thanks, Mean Joe!” ad for Coke? Or a young Macaulay Culkin, as Mikey, munching Life cereal for 90 minutes? Or Don Rickles, in drag, searching for a missing hamburger patty in the raucous slapstick Where's the Beef?!

Despite those clearly missed opportunities, though, I'm happy to report that while the product placement for a particular carbonated beverage is grossly yet understandably accounted for, director Charles Stone III's basketball comedy turns out to be a completely inoffensive good time – hardly memorable, but filled with high spirits and charming turns by sports stars who prove to be not-bad actors. Desperate to win the annual Rucker Classic street-basketball game, Lil Rel Howery's put-upon Dax coaxes 70-something legend Uncle Drew (Kyrie Irving) out of retirement, and from that point on, the movie is essentially The Blues Brothers without the blues – a slapdash yet winning bringing-the-band-back-together ride with former WNBA player Lisa Leslie in the Carrie Fisher role. Pepsi spokesman Irving is amusingly cantankerous under his decrepit-old-man prosthetics, and he shoots and dribbles with exceptional skill. (Duh.) But all of the NBA guests, under equally heavy and (intentionally?) phony-looking makeup, are enjoyable: Shaquille O'Neal as the nearly mute “Big Fella”; Reggie Miller as the mostly blind “Lights”; Nate Robinson as the initially wheelchair-bound “Boots”; and, best of all, the joyously energetic Chris Webber as “Preacher,” who, in one scene, goes the full James Brown in a church's baptismal bathtub. (The infant being baptized is clearly played by American Sniper's beloved Fake Baby, who has never before been quite this welcome on-screen.)

Narratively speaking, there isn't a surprise to be found in Jay Longino's script, and the bevy of stock supporting figures – among them Aaron Gordon's turncoat Casper, Erica Ash's love interest Maya, and Nick Kroll's rival coach Mookie (a hipster wannabe described as “that Macklemore-lookin' dude”) – have less depth than you'd find in your average 30-second TV spot. But the movie's happily unpretentious vibe remains endearing, its expected sentiment feels largely earned, and Howery proves himself a funny, lovable-sad-sack lead who should start getting first rights to at least a few of the scripts that wind up in Kevin Hart's hands. As a major fan of the sadly discontinued The Carmichael Show, I also loved seeing Howery reunited with his sitcom ex Tiffany Haddish here – though it should go without saying that any excuse to see Haddish in action is a good one. True, she's too inherently likable to be fully convincing as Uncle Drew's requisite hateful bitch. But Haddish is probably the best thing to happen to American comedies in years, and if the performer ever gets recruited for her own line of commercials, I'm crossing fingers that those get adapted into feature films, too.