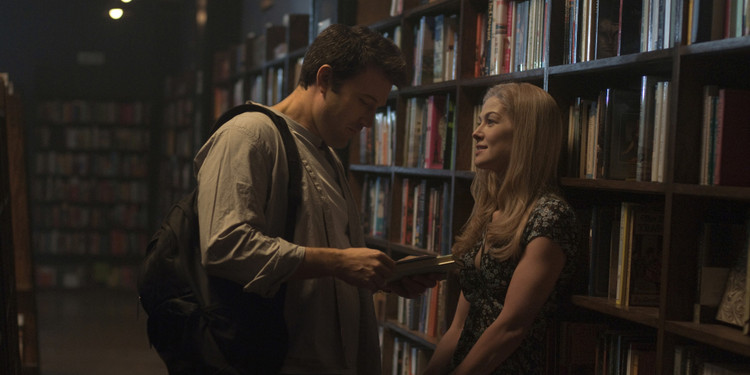 David Fincher's Gone Girl, adapted from screenwriter Gillian Flynn's 2012 literary phenomenon, opened on Friday. I was tempted to compose this review under the headline “SPOILER ALERT!” just to make it absolutely clear that, in order to offer a thorough opinion, I'd be revealing elements of this suspense thriller that the uninitiated might not want revealed. But after a couple of days spent sitting on the experience, I'm not certain that going into the movie's specifics is all that necessary, as long as (MODERATE-SPOILERS ALERT!) I'm allowed to share my impressions that (1) the role of Rosamund Pike's titular Amy Dunne is a co-lead opposite Ben Affleck's Nick Dunne; (2) almost no scene featuring Amy reads as remotely believable; and (3) in the end, that doesn't matter all that much.

Regarding plot specifics, let's stick with the ones founds in the first 45 minutes of Gone Girl's wonderfully speedy 150. After being laid off from their apparently lucrative writing jobs in New York, young-ish marrieds Nick and Amy grudgingly return to Nick's hometown of New Carthage, Missouri, where Amy's nest egg allows Nick to buy a bar with his twin sister Margot (Carrie Coon), while the unemployed Amy whiles the days away in their suburban house. As we quickly glean, Nick's and Amy's formerly passionate romance has grown stale and sour, and seems near its breaking point on the day Nick comes home to find his front door ajar, his living room's glass table shattered, and Amy missing. Famous for inspiring the pre-teen “Amazing Amy” character in children's books written by her psychiatrist parents, Amy's vanishing act becomes national news, search parties are formed and candlelight vigils held, and Nick – with his Affleck-ian insouciance – slowly but surely emerges as the chief suspect in his wife's disappearance. Meanwhile, these early scenes are routinely interrupted by flashbacks (presented as diary entries) narrated by Amy, in which we eventually learn that this couple's seemingly perfect life together wasn't perfect at all, and that Nick might have had both the opportunity and the motive to murder her.

The thing is, though, from the moment Pike begins speaking in voice-over, and the moment Amy and Nick first lock eyes in a cocktail-party flashback, warning bells screaming “Do not trust this woman!” begin ringing in your ears. As one of the few dozen people in America who hasn't read Gone Girl's source material, I can't say whether Amy comes off as this supremely unreliable in Flynn's novel. People I know who have devoured the book, however, insist that it's a pretty even-Steven story (give or take a few ghoulish detours), and that your alliances tend to shift along with whichever Dunne is telling the tale. That is absolutely not the case here. Nick, as we're shown, is flawed – at times terribly flawed. But beginning with Affleck's empathetic, casual everyday-guy-ness, and continuing through the funny, down-to-earth figures orbiting him and the director's tendency to shoot Nick's scenes in unfussy and (for Fincher) un-heightened compositions, the film lands firmly on the side of the husband.

As for the wife, whose visual intro finds her scribbling in her diary using the sort of frilly, feathered pink pen that most tweens would be embarrassed to own, she and her side of the story are jokes from the start. Part of this is Flynn's doing. Amy's early recitations about being so-o-o-o in love and so-o-o-o happy drip with fraudulent giddiness, and Pike's readings of these doubt-inspiring diary entries are almost unbelievably arch and insincere; you begin to think that we're not being shown Amy's face in the act of writing because Pike wouldn't have been able to effectively hide a condescending smirk. But nothing about Gone Girl's early, Amy's-side-of-things sequences feels truthful: not her job (she had a high-paying gig writing quizzes for women's magazines?!), not her boorish parents (David Clennon and Lisa Barnes deliver Manhattan-shrink caricatures), and, in Fincher's deliberately artificial and menacing tableaux, not in her milieu. (When Nick proposes to Amy, it's in front of four acquaintances – fastidiously arranged in the shot – whose vacuously creepy smiles barely change when Nick pulls out the ring.) 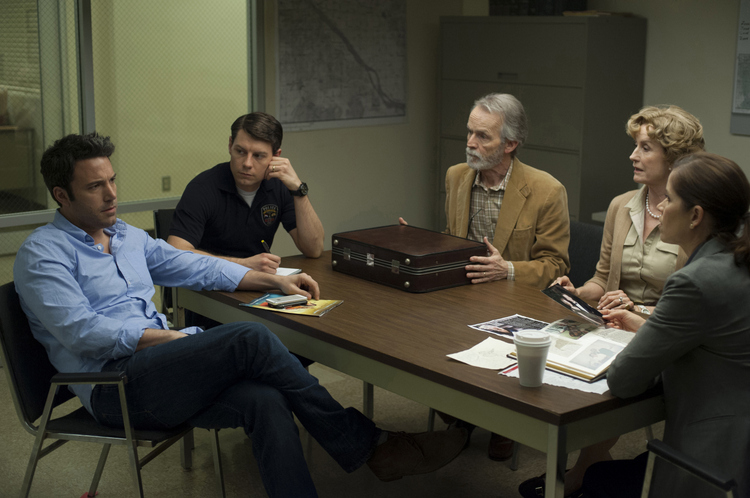 Without really getting into it, the later scenes involving Amy come off equally false, with the arrival of her conveniently Midas-rich ex-boyfriend Desi (Neil Patrick Harris, well-cast but as inhuman as Pike), and the narrative completely unraveling as one character after another stupidly falls under the woman's spell. (One crucial scene finds a roomful of male cops ridiculously smitten while listening to testimony that could set off bullshit-detectors in the hearing-impaired.) For long stretches, I couldn't tell if the material and characters were inherently thin, or if Fincher and several of his cast members were merely doing a thin job of dramatizing them. Yet here's the rub: As long as you don't care that the movie makes no bones about where its sympathies lie, and don't care that Fincher and company stack its deck so neatly against Amy, Gone Girl is an awfully easy film to enjoy.

Fincher's continually staggering technique, as per usual, is on display starting with the opening credits, with the cuts arriving, and the cast and crew names vanishing, just a couple of beats faster than you're accustomed to. Plus, with the director working alongside a number of frequent, madly gifted collaborators – cinematographer Jeff Cronenweth, editor Kirk Baxter, composers Trent Reznor and Atticus Ross – the movie looks and sounds incredible. Fincher, yet again, demonstrates an applause-worthy ability to turn a scene that feels throwaway into something nearly essential. (Here, it's the passage in which a pair of investigators poke around in a crack den the size of a crack warehouse, with junkies skittering away like cockroaches whenever the cops' flashlights land on them.)

And man does this movie boast some great supporting performers. Affleck gives the perfectly-fine portrayal you expect, and Pike – who has some particularly strong moments around the film's halfway point – makes a heroic attempt at overcoming a fundamentally senseless, impossible role (and is pretty damned watchable even when you don't believe her). But scene after scene is filled with superior character work: Coon as the sardonic, deeply conflicted Margot; the marvelous Kim Dickens as the sensible, inquisitive Detective Boney and Patrick Fugit as her comically incredulous ally; Tyler Perry as a seen-it-all defense attorney who gradually realizes, to his delight, that he hasn't seen it all quite yet; Lola Kirke and Boyd Holbrook as neighbors of Amy's even less trustworthy than she is; Sela Ward as a willful TV interviewer oozing faux concern; Missi Pyle as Nancy Grace-esque TV gossip-monger. Gone Girl isn't subtle, and in its presentationally lopsided mystery, is probably less subtle than the book it's based on. Yet it's a nasty and wholly entertaining good bad time at the cineplex. Flynn's novel may be a queasy, black-comedy spin on He Said, She Said while its screen adaptation is much closer to Fatal Attraction, but happily, Fatal Attraction is a fantastic amount of fun. 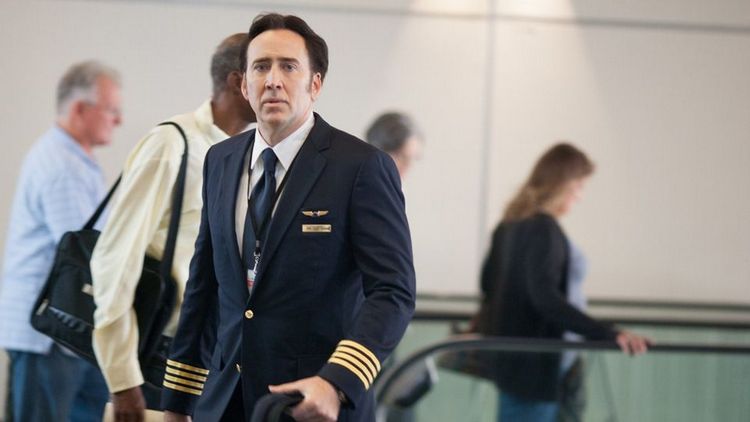 Only one person goes missing in Gone Girl. In Left Behind, millions of 'em do – including, apparently, anyone who might've dialed down the hysteria in this accidentally funny faith-based thriller. Adapted from the popular novel by Jerry B. Jenkins and Tim F. LaHaye – and a remake of the only Kirk Cameron movie anyone could conceivably want to remake – director Vic Armstrong's outing finds the young and the devout instantly whisked to Heaven regardless of whether they were in their mothers' arms or driving motor vehicles, with those who remain trying to make sense of the mass exodus. (Which, in this case, is less exodus than Revelation.) It's a fantastically juicy premise, as it was even in 2000's woebegone Kirk Cameron version, and Armstrong has powerful images at his disposal: a hospital nursery with loads of baby stations but no actual babies; a grieving senior, on her front porch, caressing the clothes of her recently, literally departed husband. But most of the movie takes place mid-flight on a plane, with Nicolas Cage as the pilot, and consequently most of Left Behind emerges as the silliest Airport sequel never filmed – endless shrieking and contrived tension and spectacularly misguided “comic relief” in quarters that are way too cramped. I applaud the filmmakers for securing a bona fide A-list actor for their lead (and thank them for the brief chance to see Lea Thompson on-screen again). But Cage does so much overenthusiastic emoting that he unintentionally makes the bum dialogue, blah staging, and lackluster sound and visuals more glaring than they might've been with a less famous, less zealous actor in the role; what could have been considered a moderately engaging pro-faith suspense drama instead comes off like a typically laughable Nicolas Cage suspense drama à la Knowing or Next. Co-stars Cassi Thomson and Chad Michael Murray lend some humanity to the proceedings, but I spent far too much time at this end-of-days effort suppressing giggles, especially when, near the finale, the safety of Cage, his aircraft, and his charges turn out to be dependent on Cage's daughter having a compass app on her cell. Expect sales, among a certain paranoid demographic, to go through the roof. 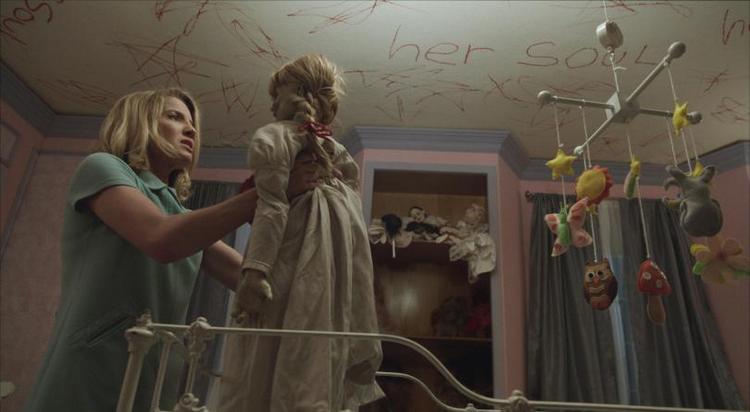 Tracing the history of the doll from hell who creeped us out in 2013's The Conjuring, director John R. Leonetti's horror prequel Annabelle finds the nightmarish plaything in the home of a blander-than-bland couple (Annabelle Wallis and Ward Horton) beset by demonic forces. For much of the movie, Leonetti gets some tension going every time the camera focuses intently at Annabelle – the doll, not the lead actress – and her fugly visage. Shrewdly, Leonetti positions the toy so that reflected light twinkles in Annabelle's eyes, making it seem like the thing is actually actively listening, and we stare and stare, with initial comic excitement, into those lifeless plastic orbs waiting for something, anything, to signify that that doll might actually possess a soul. Alas, she doesn't, and there's little on display in the rest of the movie, either. Annabelle is a tired, silly, almost wholly scare-free disappointment that earns points for its nicely reconstructed late-'60s setting (despite a character calling 9-1-1 in 1967 when the service actually came into existence in 1968), but loses them for the setting winding up far more interesting than anyone on-screen. Except, that is, for the eternally smart, sane, beautiful Alfre Woodard, who, playing our heroes' neighbor, gets one whiff of the Satanic goings-on in their hideous Rosemary's Baby-style apartment and says decisively, “We need to leave.” Why people don't instinctively do everything Alfre Woodard tells them is a mystery.