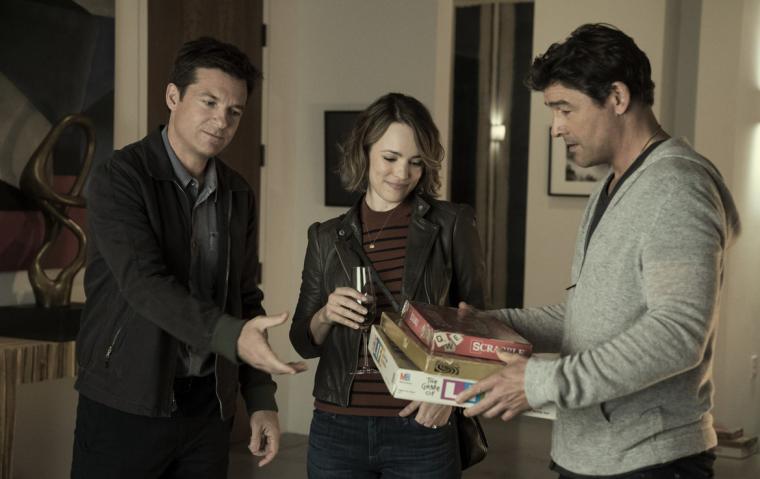 Whenever I tell friends and family about some new movie I love, the responses I generally get are variants on “Cool – I was looking forward to that one!” or “Yeah – I still don't want to see that one.” (Just as often, it seems, I get “I've never heard of that one,” particularly when I return from some excellent "art film" title.) But on several occasions now, after revealing just how much I adored Game Night, I've been getting replies of both excitement and utter relief, suggesting how collectively starved we must be for adult comedies with terrific casts and funny trailers that don't wind up disappointing us. And from its first minutes, this slapstick by directors John Francis Daley and Jonathan Goldstein is the complete opposite of a disappointment – a cleverly plotted, utterly riotous comic adventure with no agenda beyond delivering a great time, which it does with almost disarming confidence and skill. I don't want to review the film so much as send it a thank-you note.

Jason Bateman and Rachel McAdams are Max and Annie, a married suburban couple whose initial romance, as we're shown in a stylish opening montage, stemmed from their mutual fondness for competitive gaming – Charades, Pictionary, and the like. Although frustrated by their unsuccessful attempts at conceiving, with Max especially abashed after their fertility doctor tells him “I'm not loving your semen,” the couple is still a happy one, and never more so than when hosting their weekly game nights with married friends Kevin and Michelle (Lamore Morris and Kylie Bunbury), single pal Ryan (Billy Magnussen), and whichever new girlfriend Ryan convinces to tag along. But game night takes a turn with the arrival of Max's older, richer, altogether more kick-ass brother Brooks (Kyle Chandler), whom Max and Annie agree to let host a mystery-themed party in lieu of their Friday-night festivities, and who winds up the apparent victim in a very real kidnapping plot that the gamers and Ryan's co-worker Sarah (Sharon Horgan) are forced to untangle.

The operative word in that sentence, of course, is “apparent." Because any viewers familiar with these types of “What's real and what isn't?” puzzle movies dating back at least to 1973's The Sting should instinctively have their guards up the moment Brooks proposes a game night of his own. Will this all be about a brother teaching his sibling a lesson, as in David Fincher's The Game? Will one of the film's leads be in on the scam, as in David Mamet's House of Games and The Spanish Prisoner? Screenwriter Mark Perez, though, clearly knows that we know not to blindly fall for Game Night's trickery, and he and Daley and Goldstein act accordingly.

Just when you think the increasingly complicated logistics of the narrative have finally been worked out, Perez or the directors will toss in a bit of unexpected comic business, or a surprise appearance, or a storyline twist to make you question the characters' perceived experiences all over again. And even when actions or events seems relatively straightforward – as when Max attempts to rid a furry white puppy of unmistakable blood stains, or Annie has to remove a bullet from Max's arm – the manner in which they unfurl tends to be wholly unpredictable and deeply, satisfyingly silly. Those trailers may have given away the jokes of that blood-soaked pooch and Bateman with a squeaky toy in his mouth. They didn't, however, spoil the priceless glass-table running gag, or suggest why my audience loudly gasped, and then roared, at the punchline involving a stolen Febergé egg. 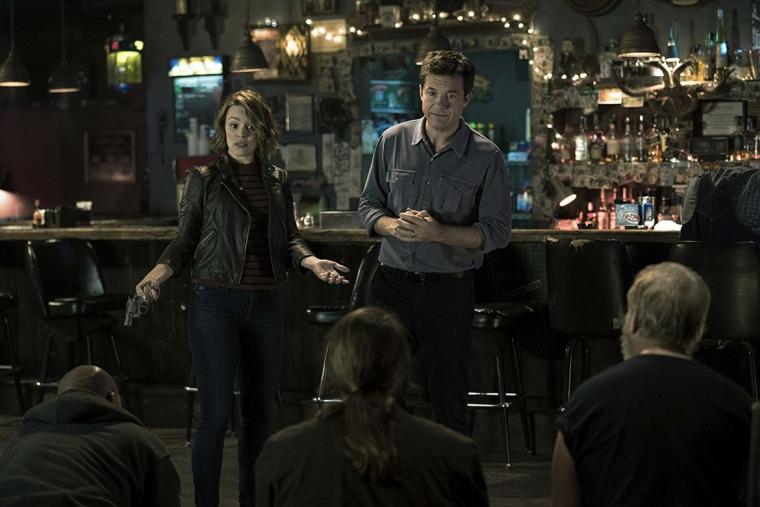 This being a mainstream Hollywood comedy, Game Night's principal characters are, as per usual, required to become better people by the finale, which means a few unfortunate (yet not damaging) sentimental detours regarding Max's and Annie's childlessness and Max's and Brooks' one-upmanship, as well as an oddly protracted subplot involving a one-night-stand that Michelle had as a teenager. Yet even these distractions yield their share of pleasures. The reveal of Michelle's pre-marital beau is an exquisite payoff to a mostly labored gag, and in a wonderful break from the genre norm, Perez's storyline isn't dependent on Max and Annie rejuvenating their relationship through the on-screen madness. Unlike in, say, the Steve Carell/Tina Fey slapstick Date Night, it's obvious from the start that our leads both love and really, really like each other, which allows the equally charismatic and hilarious Bateman and McAdams to share frisky, ingratiating chemistry throughout. (As it feels like forever since McAdams last headlined a comedy, I practically got my Game Night money's worth merely from her spot-on impersonation of Amanda Plummer in Pulp Fiction.)

Our leads are also backed by exceptional support. All of the game players are a treat to be around, and none more so than Magnussen, whose sweetheart role as the dimmest of bulbs finally gives the actor the appropriate screen vehicle he's long deserved; I was literally crying with laughter at Ryan's stunningly wrong-headed, tortuously slow attempt at bribery. Jeffrey Wright has a brief but indelible turn as a purported FBI agent who appears to have barely memorized his lines, while Chandler is fabulously energized and playful here – an overbearing yet friendly d-bag whom it would take a lifetime to properly hate.

And best of all is Jesse Plemons as Max's and Annie's neighbor Gary, a hysterically humorless cop whose excruciating conversational pauses make those he's speaking with never quite sure when conversations are over. Daley and Goldstein deliver some stellar, elaborate action choreography, and there's enormous pleasure to be had in Perez's ceaseless parade of pop-culture riffs – amusing verbal throwaways that make perfect sense coming from characters who frequently play Celebrity. But despite heavy competition, Plemons emerges as the MVP of the witty, wonderful Game Night, and I wanted to hug Daley and Goldstein for so thoroughly showcasing his contributions in the end credits, to say nothing of giving the actor the honor of the movie's very last closeup. “I hope you had fun,” Plemons' borderline-hostile deadpan seemed to say. To which I silently replied: Hell yeah I did. 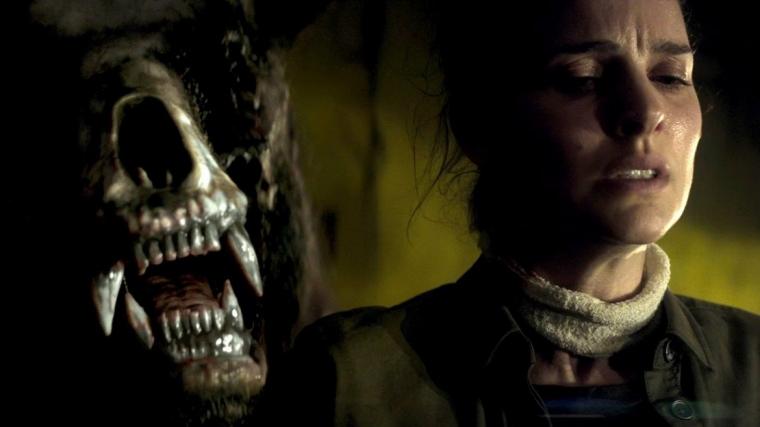 A meteor crashes to Earth, landing near a lighthouse in a south-Florida marshland. It creates a translucent, ever-expanding force field that begins to swallow up the surrounding acreage. Teams of scientists and soldiers are sent inside to investigate and never return – with the sole exception of Kane (Oscar Isaac), whose unknown experience has left him mentally and physically damaged. Consequently, Kane's biologist wife Lena (Natalie Portman), in the hopes of saving her husband's life, joins a new expedition to uncover the secret behind this extraterrestrial mystery labeled “the Shimmer,” where subtle and not-so-subtle genetic mutations are affecting plants, animals, and seemingly every human who enters.

Such is the setup for Alex Garland's Annihilation, the writer/director's sci-fi-horror follow-up to 2015's Ex Machina, and his film – adapted from the first in a series of Jeff VanderMeer novels – is bound to be the subject of numerous, lengthy think pieces by those fascinated by its many lingering questions and staunch refusal to provide answers. I, however, am going to wrap up my analysis in just four paragraphs, because in the hours and days since I saw the movie, I've become more and more convinced that there's actually far less going on here than meets the eye.

To be sure, Garland's latest is visually ravishing, given that even the mold on the Shimmer-ized homes and buildings is vibrantly colorful, and the nightmarish animal life includes alligators with the teeth of sharks and grizzly bears with the voices of humans. And the film's sound, particularly in the final 15 minutes, is as dazzling as its look, although it is disorienting whenever the tension is waylaid by folksy acoustic-guitar music, which happens with surprising frequency. Yet in terms of narrative, Garland's script is remarkably banal. In addition to Lena, four other women – largely depressive figures played by Jennifer Jason Leigh, Gina Rodriguez, Tessa Thompson, and Tuva Novotny – enter the Shimmer, but their characters have no scope or interior life; they're basically just there, in stereotypical horror-flick fashion, to get picked off one by one. (There's also no explanation for why an all-female scouting team was selected – not even an explanation revealed by the film's end – nor a reason for no biologist being invited on the mission until Lena helpfully showed up.) Lena is saddled with guilt-laden backstory and accompanying flashbacks that have no impact on the plot or her purpose in it. Randomly effective sequences such as that scary bear attack are constantly undermined by genre contrivances, with the cliché of the Found Video Footage – footage that's found, naturally, in cameras housing apparently undying batteries – actually employed twice.

And when Lena, as she must, eventually confronts the reality of the Shimmer, the moment might have been transcendent if it wasn't instead unintentionally hilarious, suggesting the finale to Close Encounters as staged by the world's most obnoxious modern-dance choreographer. (At my screening, I was by no means the only patron indulging in inappropriate giggles.) The acting is solid and the tech mostly impressive, and this piece of truly goofy seriousness still emerges as much ado about nothing. For Pete's sake, we don't even get a satisfying rationale for the movie being titled Annihilation – unless, perversely, it's referring to the annihilation of our time spent watching it. 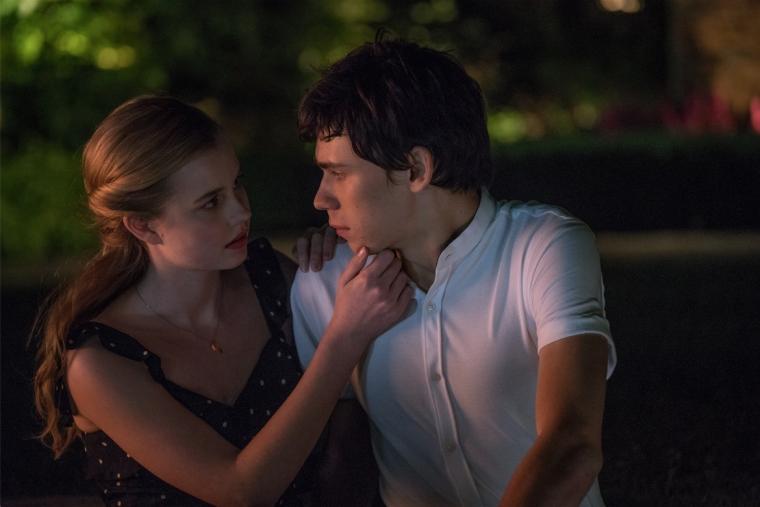 A YA-lit adaptation of unimpeachable life lessons and bat-shit-insane plotting, director Michael Sucsy's Every Day concerns a likable teen (Angourie Rice's Rhiannon) who falls in love with “A” – some kind of unexplained supernatural being who spends his/her/its life inhabiting one human body after another for 24 hours at a time. My guess is that the David Levithan novel that Jesse Andrews' script is based on is a touching read about kindness, generosity, and the willingness to look past surface details and see people for who they really are. Sucsy's movie, while touching at times, is more accurately about the inherent coolness of seeing so many talented male and female actors of vastly different physical, ethnic, and character types all getting to play, for just a few minutes, a big-screen romantic lead – and for my money, that's a good-enough reason for it to exist.

The editing is oftentimes sloppy, with large sections of the film (principally scenes involving Maria Bello as Rhiannon's mom) seemingly left on the cutting-room floor, and by its halfway point, you can feel the movie slipping into incoherence, with the impossible narrative appearing to make up its rules as it goes along. But Every Day is still winning and sincere and boasts loads of strong performances (its finest support coming from Justice Smith, Lucas Jade Zumann, Jacob Batalon, Owen Teague, and the throaty, sardonic Debby Ryan), and lead Angourie Rice – so good as Ryan Gosling's daughter in The Nice Guys – is spectacularly poised and naturalistic. She's also a dead ringer for a young Amy Adams … just as Sophia Lillis was in this past fall's It. Not to pry into her personal life, but Adams hasn't been moonlighting as a surrogate, has she?