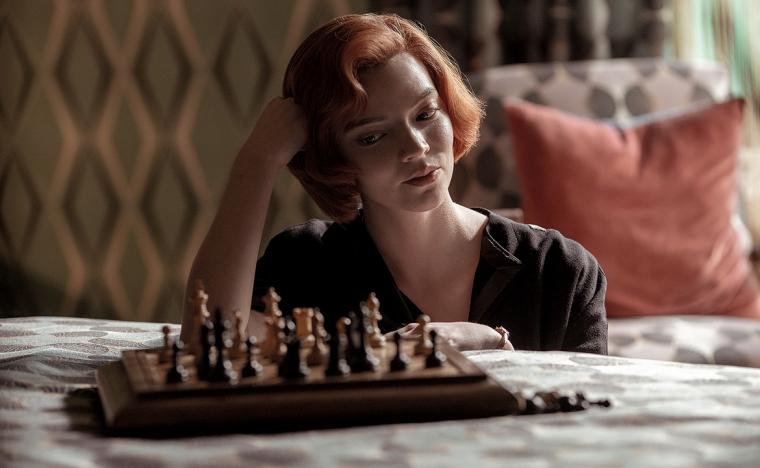 Anya Taylor-Joy in The Queen's Gambit

Faced with the cineplex prospects of the critically thumped historical drama The Last Vermeer and the critically savaged action flick Vanguard (a movie that bombed even in its star Jackie Chan's native China), I hope I'll be forgiven for bypassing both this past weekend with a polite yet firm “Thanks, but no thanks.” Especially considering I chose to ignore their collective four hours for the collective 19 hours of these home-viewing options: four worthwhile entertainments – a couple of them really worthwhile – that can be enjoyed from the comfort of your couch. Or if you're like me, for one particular 30-minute stretch, from the relative discomfort of standing in front of your couch.

THE QUEEN'S GAMBIT: This morning, a New York Times article stated that eBay has seen a 215-percent increase in the sales of chess sets and accessories since the October debut of Netflix's limited series. If it's indeed true that The Queen's Gambit is responsible for the uptick, I wouldn't be surprised if similar sales spikes are soon reported for mod mini-dresses, digital compilations of '60s pop hits, and boyfriends who look like Dudley Dursley from the Harry Potter movies.

A genuine pop-culture phenomenon along the lines of The Tiger King – except with, you know, fewer unresolved deaths and way-fewer weirdos – The Queen's Gambit is a spectacularly bingeable seven-episode entertainment, the tale of female chess prodigy Beth Harmon (Anya Taylor-Joy) and her rise to world-class game dominion despite a childhood spent in an orphanage, sexual discrimination, and significant alcohol and opioid addiction. It took all of one episode for me to race to Wikipedia determined to learn more about this fascinating, Bobby Fischer-esque figure whom I had somehow never heard of … only to discover that Beth Harmon didn't really exist, except as the fictional protagonist of Walter Tevis' 1983 novel. But my confusion actually speaks to the mesmerizing detail and emotional power of this series created by Scott Frank and Allan Scott, in that I didn't just want more information; I desperately wanted to make sure that Harmon's life turned out better than it began. 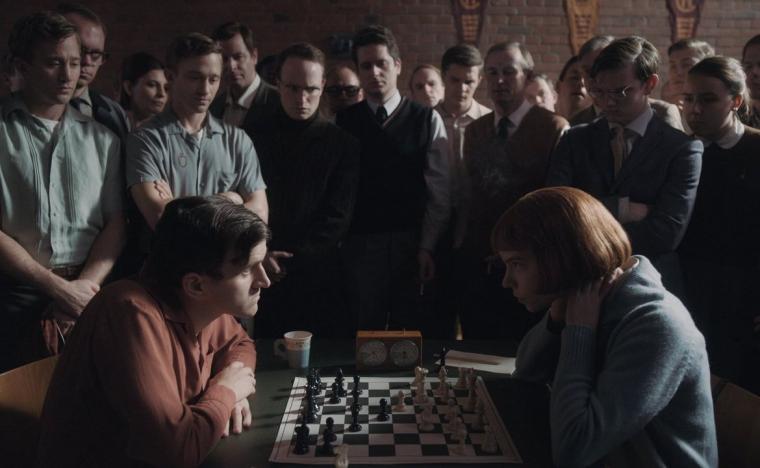 Her obvious intelligence, fierce concentration, and gorgeously wide-set eyes never before employed to such fine effect, Taylor-Joy finally gets the expansive, star-making role she's deserved ever since The Witch, and director Frank's ensemble boasts a tremendous crew of acting talents, among them Bill Camp, Thomas Brodie-Sangster, Marielle Heller (best-known recently as the director of Can You Ever Forgive Me?, A Beautiful Day in the Neighborhood, and What the Constitution Means to Me), and the aforementioned Harry Potter alum Harry Melling, who's absolutely, unexpectedly adorable here. Even if the performances were merely adequate, though, The Queen's Gambit would likely make for riveting viewing for the period-perfect costumes and décor alone, to say nothing of the series' ability to make chess seem like the most challenging, maddening, exciting, fulfilling activity on earth, and maybe the most sensual, too. (Taylor-Joy wraps her long fingers around opponents' game pieces with a teasing elegance before whisking them off the board and staring directly into her competitors' eyes, and I swear that Lauren Bacall in her prime couldn't have pulled off these gestures with sexier panache.) If you haven't yet caught up with this streaming sensation, do so at your earliest convenience. And be prepared to pop onto eBay immediately after. 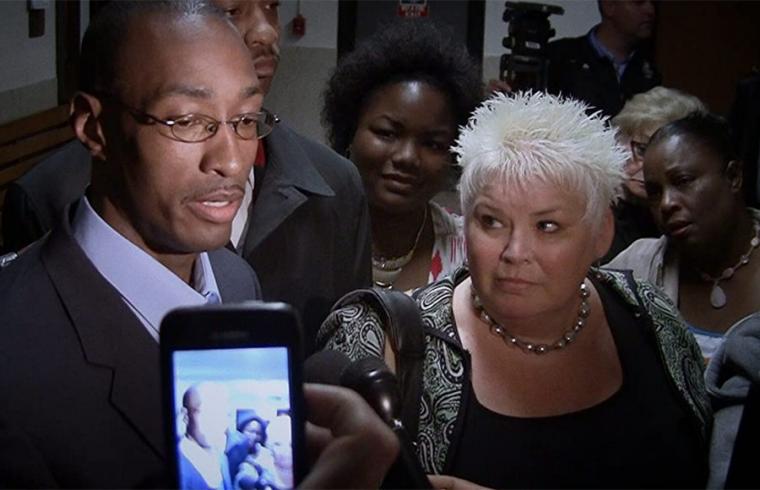 TRIAL 4: Another limited series on Netflix, and a binge-watch just as transfixing as The Queen's Gambit, but 10 times more gut-wrenching. In the first of its eight episodes directed by Rémy Burkel, Trial 4 might appear to be of a documentary type that, heartbreakingly, we're all too familiar with by now: a deep dive into the personal and judicial struggles of a man who, given all apparent evidence, has been wrongly convicted of murder. That initial episode introduces us to its subject Sean K. Ellis; details (through voice-over and animated recreations) the means by which Boston police officer John J. Mulligan, in 1993, was shot to death in his car outside a Walgreens; and effectively demonstrates the collective lack of motive, opportunity, and even possibility before the then-teenaged Ellis was arrested for the killing. But when he's interviewed by Burkel during this first episode, the now-middle-aged Ellis is obviously no longer in prison, indicating that justice, though a very long time coming, was finally served. So what could Trial 4 possibly have to hook us for its seven remaining episodes?

Unless you've seen the series, man oh man, you have no idea. For one thing, when Burkel first talks with Ellis, it turns out that the latter is only free on bail – after three mistrials, the defendant is currently awaiting his fourth court case, leaving his ultimate fate, for we viewers, still up in the air. But more specifically, Ellis' impending trial is only part of Trial 4's grand design, as the series also goes into great, frequently enraging detail exploring the murder case's thunderously important peripherals: the alleged dirty dealings perpetrated by Mulligan and a pair of his fellow officers; the widely reported systemic racism and corruption of the Boston police department throughout the late-'80s and early-'90s; the vital district-attorney election whose victor might make the final decision as to whether Ellis is exonerated or sentenced to life in prison. Every new episode of Netflix's true-crime series expands and enriches the one that came before it, and by the show's final hour, I was so engrossed in the outcome that I literally watched half of the episode standing up, too racked with nerves even to sit. This devastating piece of work is executive-produced by Jean-Xavier de Lestrade, the French filmmaker who directed two of the millennium's most phenomenal documentary achievements: 2001's Oscar-winning Murder on a Sunday Morning, and the 2004 limited series The Staircase, which is also currently streaming on Netflix. I can't possibly rave enough about those releases. I can't rave enough about Trial 4, either. 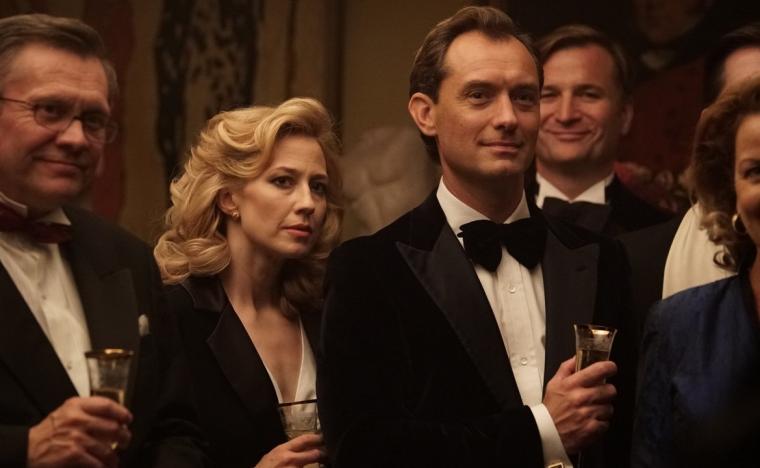 THE NEST: Because of the expanded eligibility window due to the global pandemic, the nominees for next year's Oscars are currently scheduled to be announced on March 15. The ceremony itself won't be taking place until April 25. But believe it or not, and I'm not sure I do believe it, awards season is already upon us! Nominations for the indie-focused Gotham Awards – traditionally the first Oscar-precursor organization to name its contenders – were revealed a couple weeks ago, with a number of anticipated features (Ma Rainey's Black Bottom, Nomadland) sitting alongside several titles that previously debuted (I'm Thinking of Ending Things, The Vast of Night). One of the already-released is writer/director Sean Durkin's The Nest, which just became available for home viewing, and which received Gotham nods for Best Actor and Best Actress. I'm still not sure how much I like the movie. Its stars Jude Law and Carrie Coon, however? Love 'em.

Dirkin's follow-up to his 2011 specialty-house hit Martha Marcy May Marlene casts Law as British equity trader Rory O'Hara, a man living far above his financial means who abruptly transplants himself and his family – wife Allison (Coon) and school-aged children Sam (Oona Roche) and Ben (Charlie Shotwell) – to a rambling mansion estate in England after securing a job with his former employer. The Nest primarily concerns the clan's gradual erosion as Allison becomes aware of her husband's escalating debt and the kids become more and more alienated from their distracted parents. What the film really seems to be about, though, is the schadenfreude-rific thrill of watching unhappily married spouses tear into each other with ferocious, theatrically performed brio, and in this the movie delivers in spades. All told, Durkin's domestic drama is a little too studied and careful for my tastes: too many statically composed shots of characters looking lonely in cavernous empty spaces; too many neatly devised narrative turns that appear to exist solely for symbolic or metaphoric purposes. (One should always be wary of the sight of a dead horse, and not just for the obvious reasons.) But every so often, Law and Coon engage in a supremely enjoyable bout of abject, unrestrained hostility to give the George and Martha of Who's Afraid of Virginia Woolf? the shakes, and Coon, who is granted a number of extended takes pinpointing Allison's incredulity and derision, is especially rewarding, her portrayal a fiendishly protracted slow burn that morphs into a full-out conflagration. She and Law and their exquisite marital tension are reason enough to visit The Nest – even if they're also the reason you want to escape it as soon as humanly possible. 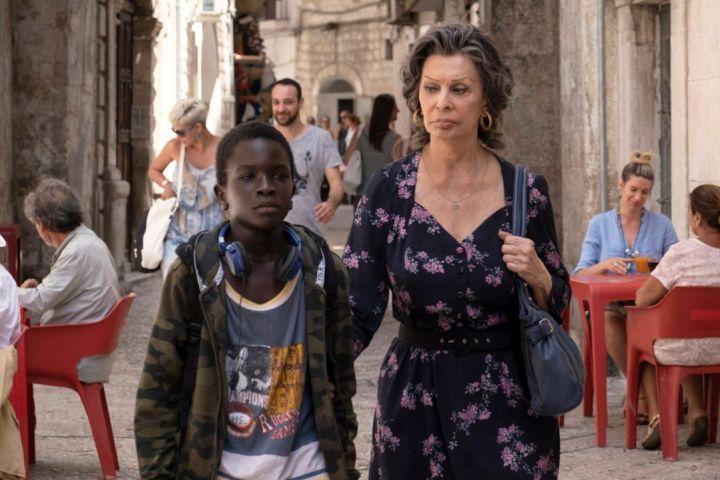 THE LIFE AHEAD: When I first started watching writer/director Edoardo Ponti's new Italian drama on Netflix, I made it through about 10 minutes before deciding to turn it off, infuriated as I was by some of the most atrocious voice-dubbing I've heard in a foreign-language film in decades. Yet because I'm incredibly slow on the uptake, I didn't initially realize that the dubbed The Life Ahead was simply the streaming service's default version of the film, and that, by making a couple of easy setting adjustments, it was also viewable in the original Italian with English subtitles. Truth be told, I'm not sure the experience was worth even that minimal effort. Although based on an acclaimed Romain Gary novel that was adapted into 1977's Oscar-winning Madame Rosa, I found Ponti's film too sensitive, sentimental, formulaic, and manipulative by half, telling of an elderly former prostitute and Holocaust survivor who becomes the unofficial guardian of a homeless 12-year-old boy (Ibrahima Gueye). It's all grossly contrived and as determinedly (by which I mean unbearably) cute as can be, with Madame Rosa's “endearingly” cranky wonderfulness spoon-fed to us in nearly every second of her screen time.

But. Did I mention that this Madame Rosa is played by 86-year-old screen legend Sophia Loren? And that this is her first feature-film appearance since the 2009 musical Nine? And that Edoardo Ponti is Loren's son? And that, for whatever other mistakes are made in the movie, Ponti at least gives us more than an hour-and-a-half of his mom acting and laughing and dancing and existing as only an octogenarian Sophia Loren conceivably could? (Though 10 bucks says Meryl Streep will give the role a shot in about 15 years.) It's easy to ask for a stronger comeback – and maybe retirement – vehicle than The Life Ahead. This, though, is Loren's. And as much as I didn't care for it, I wouldn't have missed her for the world.