Clara in Blunderland: “The Nutcracker & the Four Realms,” “Nobody's Fool,” and “Suspiria” 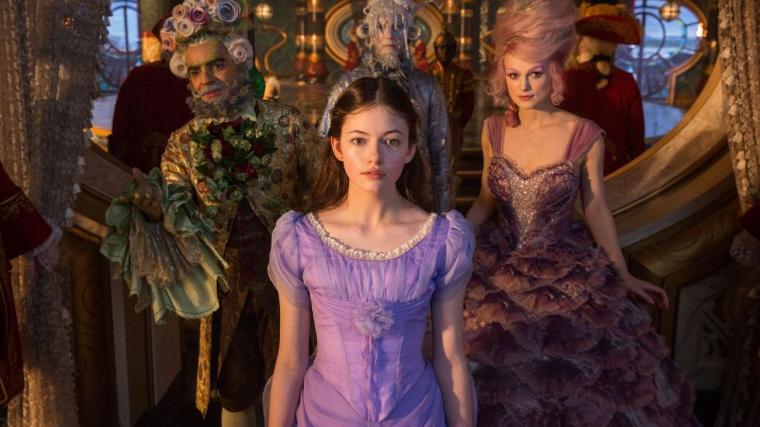 THE NUTCRACKER & THE FOUR REALMS

Given the previews' gaudy color schemes and overall air of manic busyness, my fear was that the family adventure The Nutcracker & the Four Realms would feel like an unfortunate redo of Tim Burton's 2010 Alice in Wonderland, with another cherished childhood classic Disney-fied and blockbuster-ized almost beyond recognition. What we actually get, though, is even worse: a redo of Alice Through the Looking Glass, director James Bobin's 2016 headache that managed to be even more visually garish and narratively incoherent than Burton's predecessor.

With the Four Realms direction credited to Lasse Hallström and Joe Johnston – because it apparently takes two directors to make one half-assed Tim Burton wannabe – it should be said that this cynical re-imagining of the E.T.A. Hoffman holiday fable about a young girl's treks to fantastical lands won't be wholly unfamiliar to admirers of the Nutcracker ballet. The characters and locales are much the same, we hear snippets of Tchaikovsky throughout, and for five arresting minutes, we're even allowed to witness some legitimate, and legitimately great, dancing. (While this Nutcracker-ballet segment is gracelessly shot, it at least treats us to the inspiring, fluid movements of the American Ballet Theatre's magnificent Misty Copeland.) Yet the film is still an irritating, mostly charmless experience – Tchaikovsky with ADD. 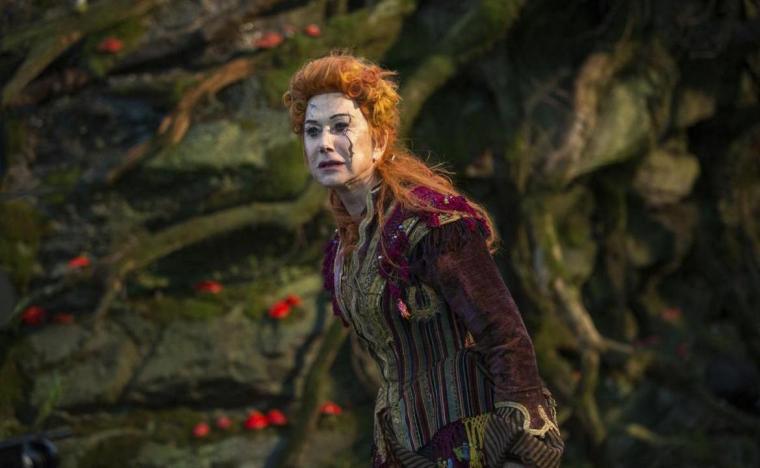 Happily, Keira Knightley, who resembles a young Julianne Moore here, manages to transcend the hyperactive banality in her role as the Sugar Plum Fairy – a delirious comic turn that's all the more delightful for being so unexpected. Speaking in a helium squeak of a voice and nibbling morsels of her cotton-candy hair when nervous, Knightley is a total treat even after a third-act plot twist threatens to waylay her characterization, and Helen Mirren delivers blessed professionalism and gravitas as the feared ruler of he Fourth Realm. Yet the film doesn't seem to know what to do with talents including Morgan Freeman (his Drosselmeyer boasting a fright wig and eye patch), Eugenio Derbez, Richard E. Grant, and Matthew Macfadyen, and while Clara portrayer Mackenzie Foy has a lovely serenity, she's far too serene, especially when staring at supposedly wondrous sights with, at best, mild curiosity. (Meanwhile, the less said about newcomer Jayden Fowora-Knight, as the humanized Nutcracker, the better. You watch this kid barely able to muster a believable reaction, emotion, or line reading, and you think: Did he win the role in a raffle or something?)

Barring Knightley and Mirren, almost nothing about this addled eyesore works, from the distracting storyline alterations (the nutcracker is now a gift given to Clara's brother?!) to the traditionally bothersome Disney flourishes (this Clara has a dead mother and Daddy Issues, because of course) to the plotting that forces Clara to become a franchise action hero leaping from towers and scaling mountains and leading armies and whatnot. I even disliked The Nutcracker & the Four Realms' purportedly touching final minutes in which Clara and her partner engaged in a waltz, which they senselessly danced to a piece written in 4/4 time. And I really disliked the mountainous assemblage of squirming rats that, by the end, we were meant to view as benign. If my mind has to wander at a Nutcracker adaptation, I'd prefer it not to wander toward the threat of rabies. 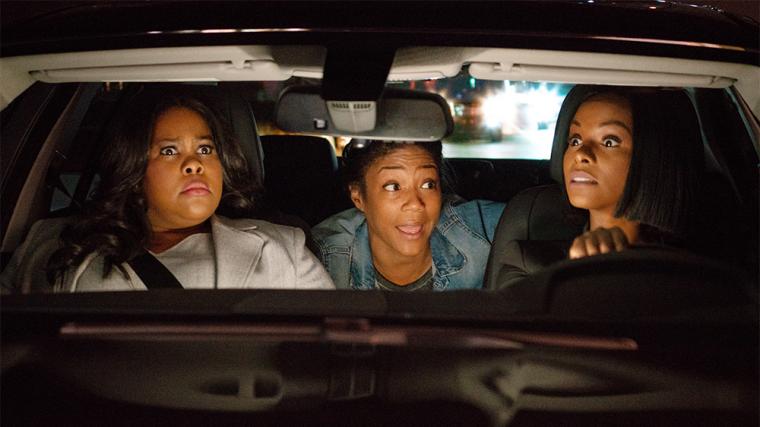 Aside from resisting the temptation to title it Tyler Perry's Nobody's Fool (an arguable sentiment, to be sure), the smartest thing Tyler Perry did for his rom-com Nobody's Fool was cast Tiffany Haddish as the movie's live wire Tanya: a blisteringly profane ex-con convinced that her sister (Tika Sumpter's Danica) is dating an unseen Mr. Right who's actually a natural-born Catfish-erman.

Taking full advantage of the film's “R” rating, a rarity in the Perry-verse, the top-billed performer is riotously, uncompromisingly raunchy, getting as much mileage out of her blatant (and seemingly improvised) come-ons and freak-outs as humanly possible, and delivering the most thrilling dose of pure Haddish as we've been given since Girls Trip. My guess is it won't be long before she starts to seem overexposed, considering that beyond her innumerable TV and video-short appearances, this marks the comedian's fourth screen role since late-June. But for now, too much Tiffany Haddish is still very much a plus … which is why the dumbest thing Perry did for his latest was lose sight of its star after the first hour, and relegate Haddish to mere drop-in status for the remainder of its 110 minutes. Endearing though she is, who could possibly care about Sumpter landing the right guy, or (for what feels like the millionth time in a Perry movie) becoming her ad agency's first black-female VP, when we've got Haddish around to baroquely disrupt a wedding or attack a man in a wheelchair by setting his hair on fire?

Admittedly, as Perry outings go, this one definitely falls in the “not bad” category. Beyond Haddish and Sumpter, Omari Hardwick is credible and engaging as the barista whom Danica takes forever to realize is The One, former Glee co-star Amber Riley performs admirable best-friend duties, Missi Pyle brings snap to her role as Danica's tightly wound boss, and Whoopi Goldberg does some of her funniest and deftest underplaying in years as the leads' sensibly stoned mother with a ghastly/glorious Cowardly Lion mane. Thank goodness, however, that the cast is as strong as it is, because hoo-boy does Perry frequently out-Perry himself here.

We're used to his scenes that tend to run on for the length of a bible, so it wasn't a shock to see a couple of Nobody' Fool diversions – notably the endless lovemaking and apology-in-the-rain sequences – start to feel like feature films of their own. And because we're also used to Perry's disinterest in narrative niceties such as logic and sense, it wasn't even bothersome when, for instance, Danica expressed amazement that an Alcoholics Anonymous meeting was taking place at the barista's café, the woman having apparently forgotten that she herself gave Tanya the café's address for her court-mandated AA requirement. (Perry also doesn't appear to notice, though we certainly do, that Danica's copious wine consumption might make her as in need of AA as her sister.) Yet with a third of the movie to go, Perry drops in a plot-twist switcheroo so jaw-droppingly ridiculous and tortuously rationalized that it not only kills your remaining interest in the film, it kills the film's one truly unanticipated, and most hilarious, comic detour involving a celebrity cameo whose appearance is too good to spoil. Reviewers tend to get chided for being unfairly critical of the auteur's output, but to appropriate one of his own titles, sometimes Tyler Perry can do bad all by himself. 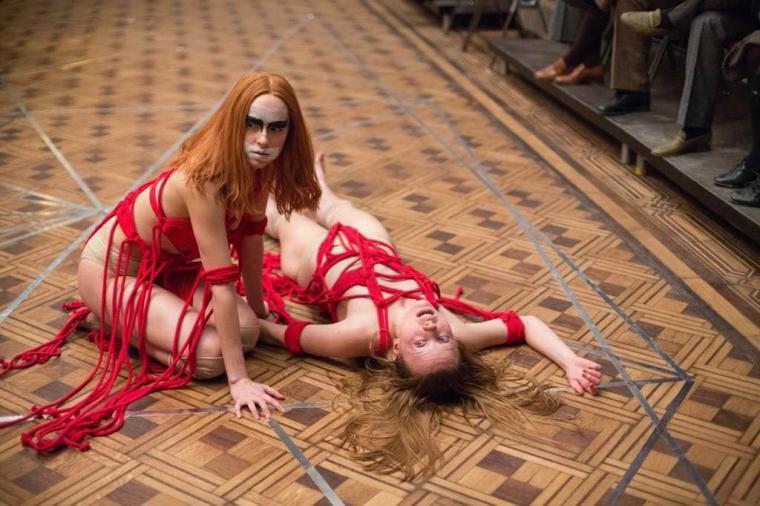 Director Luca Guadagnino's remake of Dario Argento's legendary 1977 horror film Suspiria is currently playing at Iowa City's FilmScene, and in all honesty, I'm not sure what to make of the film after only one viewing. My dilemma comes in not knowing whether I'll ever be up for a second viewing.

Detailing events set in a preeminent Berlin dance school run by a coven of witches – and that's an incredibly truncated and inadequate synopsis for a film that runs just over two-and-a-half hours – Guadagnino's alternately hypnotic and maddening follow-up to Call Me by Your Name is filled with Grand Guignol flourishes both repellant and fascinating, from the hideous cackling of its well-dressed crones to its nearly unbearable cracking of bones as a victimized dancer is supernaturally twisted entirely out of proportion. It's gorgeously shot and meticulously edited, with Radiohead's Thom Yorke providing a bounteously unsettling score. Dakota Johnson's sensitive yet cagey leading portrayal is equaled, threefold, by the contributions of Guadagnino muse Tilda Swinton, who plays an exacting ballet mistress, a decaying naked ogre, and (under the nom de guerre Lutz Ebersdorf) a male, octogenarian therapist. And choreographer Damien Jalet's dances have a feverish intensity, most especially in the blood- and viscera-splattered finale that makes Game of Thrones' “Red Wedding” finale look as wholesome as Anne of Green Gables.

That said, Suspiria is also dull, and meandering, and inconsistently acted, and thematically confounding, and narratively inscrutable, and the only borderline-laugh in the film lands in its final 10 minutes – and even then, I wasn't sure the laugh was intentional. Before the film proper began, screenwriter David Kajganish popped on-screen for a quick PSA welcoming us to FilmScene and telling us “you won't believe what you're going to see” before covering his mouth and giggling. It was an enjoyably lighthearted intro to a decidedly heavy time, and Kajganish was right: I couldn't believe what I saw. The jury's still out, though, on whether I'm glad I saw it in the first place.

For a review of Bohemian Rhapsody, visit “Is This the Real Life? Is This Just Fantasy?”