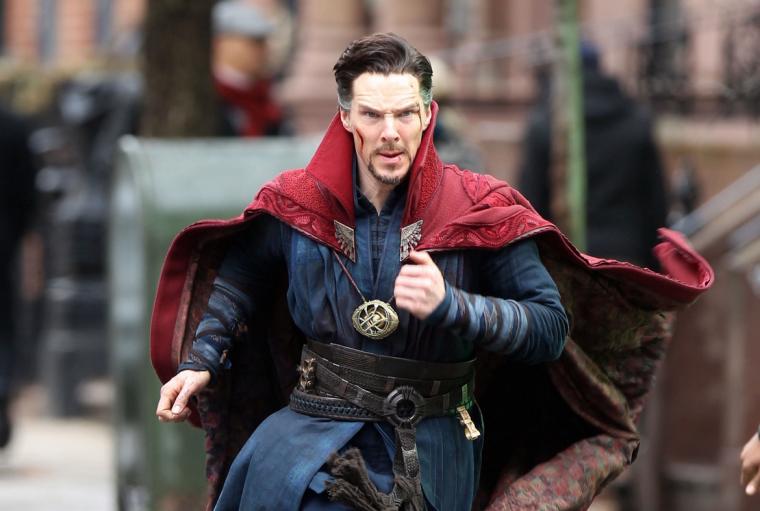 Doctor Strange is the best Marvel movie yet. I realize that, on the Internet Movie Database, fanboys express that same sentiment about nearly every new Marvel movie, although usually with more capital letters, exclamation points, and typos. But I’m thinking it might actually be true for this fantastically clever and entertaining endeavor, primarily because the traditional comic-book-flick elements that are ordinarily a yawn are instead the most satisfying elements of all.

To be clear, I’m not talking about sequences in which characters just, you know, converse. Considering the continually remarkable casts that Marvel Studios assembles for its blockbusters and the frequently sharp banter, these respites are almost always satisfying, and for my money infinitely more welcome than the CGI shock and awe surrounding them. (At Avengers: Age of Ultron, it wasn’t the domesticity of Jeremy Renner and Linda Cardellini that made me briefly nod off; it was Ultron.) As delivered by the superb Benedict Cumberbatch, Chiwetel Ejiofor, Rachel McAdams, Benedict Wong (so many Benedicts in this thing!), and Tilda Swinton, the witty chatter in Doctor Strange – its script credited to Jon Spaihts, C. Robert Cargill, and director Scott Derrickson – is similarly refreshing. In a lovely rarity, however, the overall happy vibes extend to the work as a whole. We’re used to Marvel outings being funny at their openings and oftentimes in their middles, yet this one is ticklish throughout, given that even when the dialogue stops and the fighting begins, the images alone inspire delighted giggles.

The origin-story arc that follows Cumberbatch’s Stephen Strange from arrogant neurosurgeon to slightly-less-arrogant costumed crime-fighter largely adheres to the genre blueprint: action-packed opener, narrative setup, tragic accident, training montage, maniacal über-psycho, minor skirmishes, major casualty, battle for world survival, denouement, credit cookies, fin. But from the prelude in which a hooded Tilda and her assailants bend time and space – literally bending their spaces via kaleidoscopic effects that owe much to Inception’s collapsing cityscape – Doctor Strange keeps your eyes and brain buzzing. There’s so much to look at in this and future scenes that you’re barely aware of the formula driving them, and Derrickson and his co-writers keeping lobbing in visuals as droll as they are evocative: Strange’s astral projection studying while his human form sleeps; two halves of a skyscraper unfurling like a banana peel; the doctor’s anthropomorphic Cloak of Levitation gently drying his tears. There’s plenty of Stan Lee in the material (including the man’s requisite cameo), but also M.C. Escher and the Wachowskis and Groundhog Day – a variety of disparate signifiers and influences that ensure continued invention and surprise, and lead to unexpectedly nonstop enjoyment. Astoundingly, this also applies to the big-budget action climaxes. I think even the most ardent Marvel fans would agree that the studio’s epic battles royale tend to run on too long and feature fewer legitimate surprises than the less grandiose melees preceding them. Doctor Strange, though, may reach its ultimate peak at the very moment you’d generally start looking at your watch. While we’ve all seen spectacles of this sort wrap up with a scene of citywide demolition, I truly never thought I’d see one that, thanks to shifts in the space-time continuum, ended with citywide reconstruction. And while other offerings of this type have, in their last minutes, boasted a human waging war against an enormous inhuman deity in the sky, none before Derrickson’s have made that final confrontation both so logical and so hilarious. Give or take an Ant-Man, this may be the first closer to a comic-book movie that’s designed to hit our funny bones more actively than our nerves.

But then again, maybe that shouldn’t have come as such a shock, given that even the exquisitely sinister Mads Mikkelsen, in his role as the time-hopping thorn in our hero’s side, is allowed an excellent running gag in which he repeatedly refers to his nemesis as “Mister Doctor.” Imaginative, visually dazzling, and filled with far more laughs than we had any right to anticipate, Doctor Strange is a total kick. In the scenes between Cumberbatch and Mikkelsen, it also suggests a potentially kickier one. Is anyone else now absolutely aching for a Sherlock vs. Hannibal mash-up?! The true story of World War II combat medic Desmond Doss, a conscientious objector who saved many lives during the Battle of Okinawa and earned the Medal of Honor, Hacksaw Ridge is a movie that perhaps only Mel Gibson could have made: an unnecessarily, distressingly, excessively violent ode to an inspiring pacifist – The Passion of the Christ in Army fatigues. Heaven knows that Doss’ story is eminently deserving of screen treatment; the mere fact that the man (embodied here by Andrew Garfield) was able to survive such unfathomable wartime conditions, let alone emerge as a genuine hero, without ever firing or even holding a gun has to constitute some kind of miracle. Yet Gibson, despite his $375-million-grossing Passion play, is not a filmmaker you turn to for depictions of the miraculous. He’s who you turn to for the blunt, the simplistic, the racially insensitive, the unrepentantly macho, and the unremittingly gory, and all that, in Hacksaw Ridge, he delivers in spades.

It’s hardly a newsflash that this is just what some viewers revere Gibson for. The three Ladies of a Certain Age who sat near me at my crowded screening, for instance, were likely getting exactly the experience they craved given their giddy murmurings of “Oh shit, oh shit, oh shit ... !” at the exploding viscera and their solemn vocal agreement after the line “Nips don’t care if they live or die.” (Like most other patrons, they also chuckled warmly at the early Our Town courtship of Doss and his sweetheart Dorothy – played by the inevitable Teresa Palmer – and laughed heartily whenever Vince Vaughn’s Sergeant Howell insulted or abused his recruits. Given Vaughn’s stunning inability here to make even one line period-authentic or emotionally honest, I was laughing for no doubt different reasons.) But even though I felt isolated in that auditorium, I couldn’t have been alone – could I ... ? – in finding something intensely distasteful about Gibson and screenwriters Andrew Knight and Robert Shenkkan exploiting Doss’ World War II experiences for a movie that views violence as this much of a turn-on. Gibson wants to horrify us with his Okinawa imagery, and he certainly does that through the unforeseen bullets through the troops’ helmets and heads, the gushing blood from severed arteries, and the shredded entrails spilling from torsos like so much vermicelli. But he doesn’t just want to horrify us; he wants to thrill us – to leave us pumped by the adrenaline of war in a way that I have to believe would have absolutely appalled Desmond Doss. There’s a scare-flick dream sequence and a “corpse” shrieking to life à la David Fincher’s Seven, and an instance recalling Schwarzenegger’s Total Recall in which a body is used as a shield. There are mud-buried soldiers out of Rambo and unconvincing CGI fireballs out of every bad action movie ever, and troops spitting blood the consistency of cherry Kool-Aid. There’s the shadowy, Apocalypto-y Other-ness of the Japanese armies, none of whom, it should go without saying, have any purpose aside from occasionally popping out of the smoke and shrieking directly in our heroes’ faces. And through it all, there’s composer Rupert Gregson-Williams’ overbearing score egging on the frequent savagery and only-occasional uplift – and egging us on to demand even more blood, more vengeance, than even this relentless picture delivers. (Are Gibson’s tactics effective? Certainly. Are they morally abhorrent? Quite possibly.) To his credit, Gibson stages Doss’ eventual saving of lives with a measure of sincerity and respect, and despite much one-dimensional acting by the likes of Hugo Weaving and Sam Worthington, Garfield does his best to provide character complexity and inner truth. Too bad his efforts don’t wind up having greater effect, as Hacksaw Ridge ultimately proves less interested in the inner than the innards. Inspired by those squat dolls with the beatific grins and multi-hued explosions of hair, Trolls finds a few of its titular beings farting glitter and crapping cupcakes, and for its first 15 minutes it felt like the movie was doing the same. But if your children have strong-armed you into taking them and you find your teeth hurting during the early, candy-coated excess of it all, hang in there: Directors Walt Dohrn’s and Mike Mitchell’s animated musical comedy gets a lot sweeter, but without an accompanying sugar rush. A rescue saga almost plagiaristically reminiscent of The Angry Birds Movie, Trolls has an easily ignorable plot, and its original pop ditties are underwhelming. But I, for one, barely cared, because this sprightly, agreeably throwaway family film also boasted Anna Kendrick on “The Sound of Silence,” Zooey Deschanel on Lionel Ritchie’s “Hello,” and snippets of everything from “I’m Coming Out” to “Total Eclipse of the Heart” to Grieg’s “In the Hall of the Mountain King.” It’s like karaoke night in a gumball machine, but with fewer cavities and more Christine Baranski, John Cleese, Russell Brand, James Corden, Jeffrey Tambor, Gwen Stefani, Christopher Mintz-Plasse, and Justin Timberlake, the latter of whose rendition of Cyndi Lauper’s “True Colors” is a low-key heartbreaker. You may need kids to get into the movie without shame. You won’t need them to enjoy the film without it.