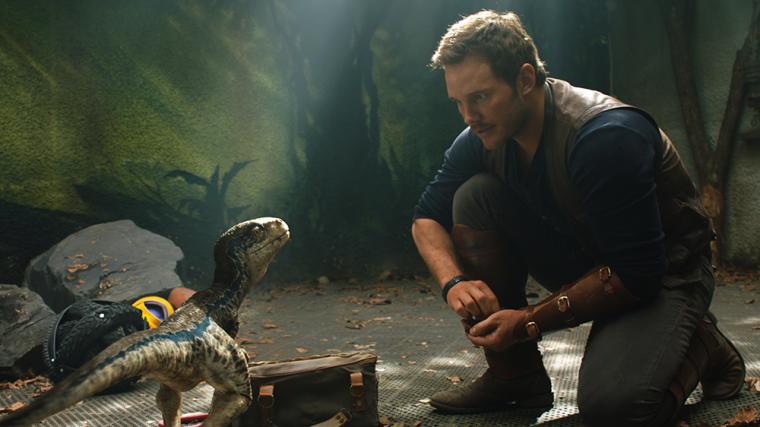 Despite the movie topping the summer-of-2015 box-office charts and grossing some 1.67 billion worldwide, it appears that many of Jurassic World's salient details completely left my brain the moment I completed my review. I realized this after returning to said article in preparation for my Jurassic World: Fallen Kingdom critique, and discovering that many of elements I was planning to diss this time around were elements I already knocked three years ago: the slavishness to Spielberg, the presentational sameness, the lack of genuine scares, the tired cliché of the first character killed off being a person of color. In fairness, the new film kills off a black guy and a white guy simultaneously, which I guess is this series' idea of progress, but still … . What was left to bitch about?

Quite a bit, actually. But in a not-unhappy surprise, very little of it matters, because while Jurassic World: Fallen Kingdom may be stupider than its predecessor, it's also a lot more fun.

Anyone familiar with this dinosaur-themed franchise dating back to 1993's Jurassic Park knows the drill from the prelude on: vicious attack; reams of character introduction and exposition; initial awe; eventual terror; panicked re-grouping; higher-stakes terror; dino-détente; promise of sequels; fin. Yet while he's obviously constricted by a deeply entrenched, studio-mandated formula, director J.A. Bayona frequently convinces you that you're not merely sitting through another soulless corporate blockbuster lab-designed to nab summertime dollars. You're also at a J.A. Bayona movie, which means that things are likely to get a little intense and weird, or at the very least, weirdly beautiful. Had I not known in advance that the film was by the terrific Spanish director of The Orphanage, The Impossible, and 2016's marvelous A Monster Calls, I wouldn't necessarily have pegged Fallen Kingdom as a Bayona outing. But I definitely would've thought that whoever did direct it had studied Bayona's style with the same fervor as Spielberg's.

At first (again, until I returned to my original Jurassic World review), I was surprised to see my morning screening overrun with very small children – even more of them, it appeared, than attended last weekend's Incredibles 2. Like the Transformers series, though, it appears the Jurassic releases have indeed become family events, perhaps because their storylines can be followed by any moderately astute four-year-old. Written by Derek Connolly and Jurassic World director Colin Trevorrow, this new franchise addition features a neatly bifurcated narrative, with the first half devoted to getting the remaining dinosaurs off their theme-park island – and, theoretically, into a newly created outdoor sanctuary – before they're obliterated by an active volcano. Its second half, however, finds the rescued creatures at the mercy of sinister forces who want to weaponize them for profit, a turn of events that delivers a strange, somewhat awkward having-your-cake-and-eating-it sensation: We're meant to shriek at the dinosaurs in Act I and actively root for them in Act II. 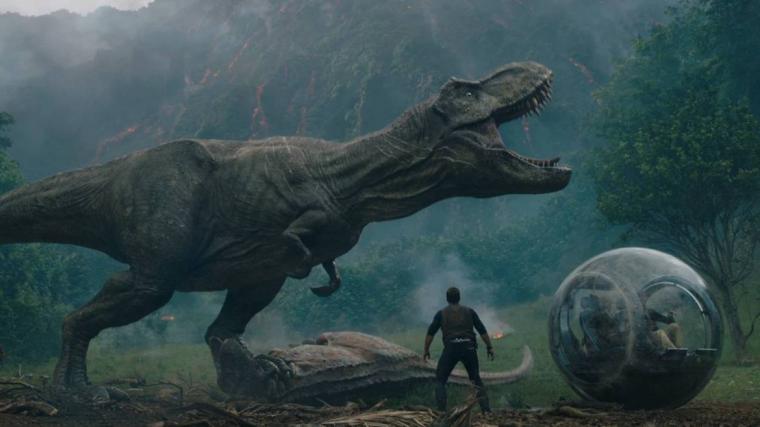 Unless you yourself are four, the rooting will probably come easier than the shrieking – which isn't to imply that the youths at my screening shrieked, either. Maybe, culturally, we're just at the point in which prehistoric beasts no longer have the power to scare us. (If so, I blame Barney.) Happily, though, they can still entertain us, and while Fallen Kingdom isn't the beast bit frightening, Bayona does a fine job of keeping his dinosaurs engaging, and even empathetic. This is never more evident than in his handling of the genetically modified indoraptor, a malevolent monster that amusingly feigns sleep and pursues its prey with an insinuating clacking of claws on the floor – the dino-equivalent of “Here, kitty, kitty, kitty … .” (It was disheartening, in the usual manner, when this “most sophisticated dinosaur ever created” was outrun by a 10-year-old girl, but what're you gonna do?) Yet Bayona routinely makes you feel for his no-longer-extinct creatures through superb staging: the howling brachiosaurus, alone and abandoned on Isla Nublar, slowly swallowed by flames and smoke; the head-butting pachycephalosaur sending deserving victims sailing through the air; the original Jurassic World's trained velociraptor Blue scampering into the brush, his escape illuminated by car headlights.

If Bayona shows more interest in his dinosaurs than his humans, you can hardly blame him, as nearly everything to do with the latter is dumber than dirt. I did enjoy the villainous turns by Toby Jones (outfitted with hilariously fake hair and teeth) and the endlessly creepy Ted Levine, and in her role as the token Feisty Little Kid, Isabella Sermon proves herself an able actor and first-rate screamer. Jeff Goldblum also returns to the franchise, lending typically winning verbal eccentricity to his two scenes as Ian Malcolm. But Chris Pratt and Bryce Dallas Howard are unfortunately back, too; Howard's footwear change from stilettos to combat boots does nothing to make her dinosaur advocate more interesting, and Pratt again does his très adorbs he-man thing, only with less commitment and worse dialogue, and as the central figure in a ludicrously silly action-hero slugfest. (It pains me to admit how unlikely it is that the once-endearing Pratt, as a performer, will ever have anything new to give us.)

Rafe Spall, James Cromwell, Geraldine Chaplin, Justice Smith, Daniella Pineda, and a severely under-used B.D. Wong also appear, and are similarly stuck with dopey, all-too-familiar plot mechanics and staggeringly silly contrivances. (Why, for instance, are Pratt and Howard imprisoned when it would make far more sense for the bad guys to shoot them?) Unlike Jurassic World, however, this one at least moves, with one scene of underwater peril – a sequence magically shot to look like one continuous take – an almost literally breathless great time. The movie also looks fantastic. Bayona isn't staring, transfixed, at the altar of Spielberg the way Trevorrow did, and while the director's pacing is excellent, he also creates marvelously distinct, low-key effects out of light, shadow, and composition, and has a true flair for physical comedy. (Pratt's only strong bit finds him scooting his immobile, tranquilized body away from encroaching molten lava like Leonardo DiCaprio trying to drag his Quaalude-ed ass into his Wolf of Wall Street Porsche.) Jurassic World: Fallen Kingdom may be a mostly bad movie, but it's a bad movie made with unexpected panache – a clone of a clone with the nerve to be distinct.