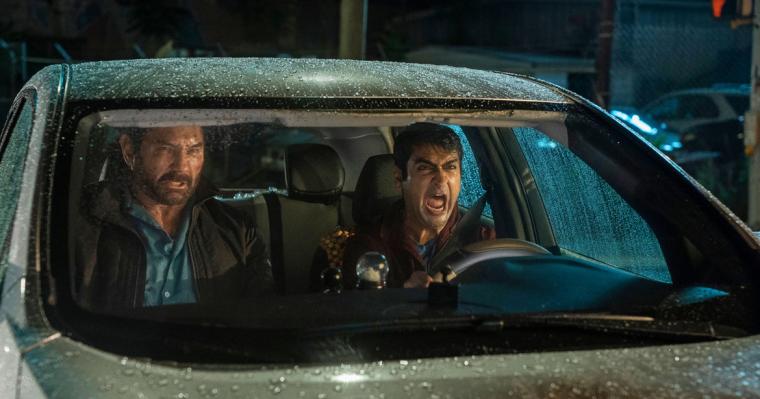 If there's any rule-of-thumb regarding high-concept movies, it's that their appeal – and, oftentimes, their plots – can be succinctly described on the fingers of one hand: “violent Nanjiani/Bautista action comedy,” for example, or “killer alligators in a hurricane.” In effect, those respective precis tell you everything you need to know about Michael Dowse's Stuber and Alexandre Aja's Crawl – except, perhaps, that both films are even more entertaining than those grabby five-word descriptions might suggest. Not a lot more, mind you … but entertaining enough, during my recent double-feature, to make me not regret the collective three hours spent in their high-concept company.

We've witnessed the scene innumerable times in Hollywood outings both comedic and dramatic: A desperate, impatient cop with no access to a squad car enters the passenger's side of a civilian's vehicle and demands, gun in hand, that the confused, frightened driver hit the gas. So I guess it was just a matter of time before a cop had to actually pay for this service. In Stuber, Dave Bautista plays the LAPD's desperate, impatient Vic Manning, who'd be hot on the tail of a vicious drug lord if only he hadn't had Lasik eye surgery earlier in the day. A foggy-eyed tap on an app later, Kumail Nanjiani's mild-mannered Uber driver Stu (o-o-ohhh … now I get the title … ) is unwittingly recruited into acting as Vic's chauffeur and unofficial deputy. Gruff, macho, muscular Bautista meets nervous, sensitive, sardonic Nanjiani: The action-comedy concept here is so high that you can practically see its nosebleed.

If you've sat through even two movies of its type before, you can also successfully predict the trajectories of nearly every character and storyline involved, from how the leads' mutual hostility will morph into true friendship to the narrative purpose of Vic's adult daughter Nicole (Natalie Morales) to the “surprise” reveal of the deceitful mole lurking within Vic's police force. Despite the initial fun of seeing Bautista reunited with his Guardians of the Galaxy co-star Karen Gillan – both of them, this time, unencumbered by prosthetics and CGI – you'll also know to enjoy their banter while you can. Gillan appears early on as Vic's LAPD partner, and in the history of cop flicks, no below-the-title actor cast as the star's partner has ever found his/his character alive by the second reel. If these sacrificial lambs weren't immediately iced, whose deaths would our tortured hero have to avenge? 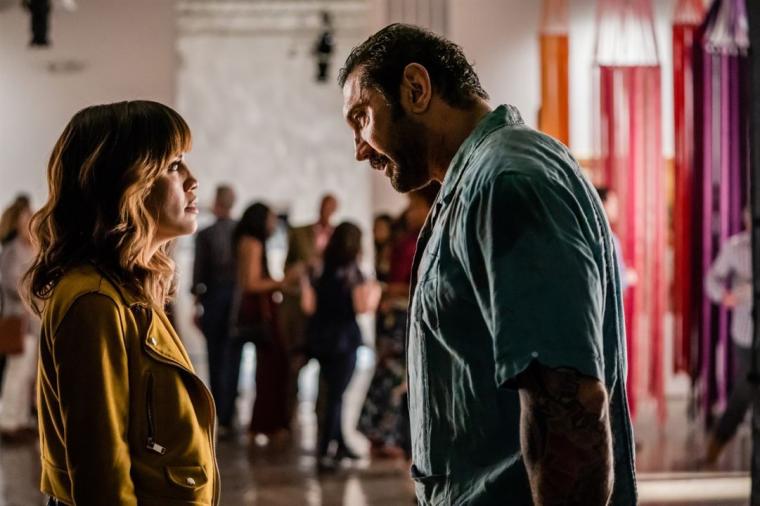 Yet while Tripper Clancy's screenplay won't win any medals for originality, it does frequently deliver its many clichés in inventive ways. The great Betty Gilpin, as Stu's platonic pal for whom he carries a serious torch, may be stuck literally phoning in – or rather, FaceTime-ing in – her performance, but her drunkenly oblivious, casually cruel character still feels like a fresh spin on a hoary role. Nicole may be around solely to demonstrate papa Vic's misguided work-before-family ethos, but as played by Morales, she isn't a simp; the level-headed career woman is fierce and funny, and barely raises an eyebrow when Stu reveals how Daddy effectively kidnapped him. (Morales' beautifully deadpan reaction suggests that this isn't the first time.) And while, as an R-rated cop movie, our heroes eventually wind up in a strip club, it turns out to be a male strip club for a gay clientele, which the half-blind Vic doesn't realize. (In a first for this genre, the strip-club sequence may be the movie's best one, especially when Stu bonds with a buff male dancer with body-image issues and a back tattoo of Hillary Clinton.)

Best of all, Nanjiani and Bautista prove to be a match made in buddy-comedy Heaven, their shared charisma helping make Dowse's entertainment perhaps the most amusing film of its kind since Sandra Bullock and Melissa McCarthy paired up for The Heat. Individually, the stars pull off their slapstick shenanigans with aplomb; Nanjiani's consistently unpredictable readings are riotous whether delivered in a shriek or a whisper, and Bautista, miraculously, keeps finding fresh spins on Vic's sight-challenged apoplexy. Together, however, they're utterly inspired: Bautista in his aghast responses to Stu's wimpiness, Nanjiani in his hissed references to Vic as “Douche Lundgren” and “Fat Freddie Mercury.” I wish the movie had given the too-rarely-seen Mira Sorvino more to do, and while I'm always grateful for a big-budget Hollywood outing that runs a crisp 90 minutes, this one feels unusually slight even for the throwaway nature of its genre. Still, as one of this summer's few releases that didn't make me yawn even once, I found Stuber a hoot, and didn't even mind that, in the end, the film is such an unapologetic commercial for the transportation service imbedded in its title. Nanjiani and Bautista were selling, and I bought it. 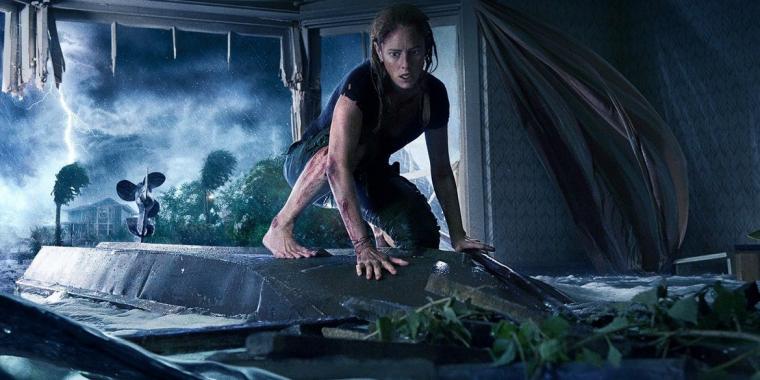 The 'gators-in-a-storm thriller Crawl casts Kaya Scodelario as a collegiate swim-team champ who, in the midst of a Category 5 hurricane in Florida, treks through intensely hazardous winds and rain to rescue her dad (Barry Pepper), the owner of a scruffy schnauzer-terrier named Sugar. Ordinarily, the sight of an adorable dog in a movie such as this comes as something of a relief, because while human limbs are routinely ripped to shreds, the pooch generally finds a way to survive. But the moment I laid eyes on Sugar – his sad, moist eyes reflecting genuine panic – I immediately tensed up, given that his director was Alexandre Aja. This is the same man, after all, who felt no compunction about putting an infant in cannibalistic peril in his horrifying The Hills Have Eyes remake from 2006, and who giddily, gruesomely dispatched an entire beachfront of hotties in 2010's Piranha 3D. (Remember the sight of that poor young woman, her hair caught in a speedboat motor, having her face literally torn off? I still haven't recovered.) Sugar may be one of the movie decade's cutest pups, but all throughout Crawl, with alligators infesting the basement of the family domicile, I was wishing he was in the care of anyone other than Alexandre Aja. A pack of hungry coyotes, maybe. Or that sadistic bastard who got John Wick all pissed off.

I won't reveal whether Sugar lives or dies in Aja's latest – even though, with the film basically a two-hander for the entrapped Scodelario and Pepper, there aren't a lot of other potential victims for the marauding alligators to choose from. But I will say that Crawl is the most genuine B-movie fun Aja has delivered since Piranha 3D: the simplest of high-concept set-ups goosed by strong acting, stunning underwater cinematography courtesy of Maxime Alexandre, and a bevy of nasty, satisfying jolts. The first appearance of a 'gator is one of them, as Aja doesn't bother with any of that teasing-of-the-terror that Spielberg employed in Jaws; the reptile here simply blasts its way into view, ravenous and scary and loud. There are equally effective bits involving the scaly creatures stealthily following and crunching their prey – the funniest comes when a trio of profoundly stupid looters considers a Category 5 the ideal time to rip off a convenience store – plus some intense home flooding that briefly turns the film into a low-rent Poseidon Adventure. (I also admired how matter-of-fact our leads were about the alligators' arrival in their home, given that as Floridians, they're hardly unused to the presence of reptiles. Scodelario's Haley actually gets more freaked out, for understandable reason, when a dozen spiders land on her face.) Despite their first-rate portrayals, Scodelario and Pepper engage in too many family-therapy sessions amidst the carnage; considering the threats of drowning and being served as entrees, dad and daughter might have saved their acrimony for the comfort and safety of a wood-panneled office. Otherwise, Crawl is exactly the shameful good time its premise suggested, and delivers a honey of a twist in its final 15 minutes, right when you think our heroes might finally have reached the end of their struggle. Upon her realization of said twist, Haley whispers, “You've gotta be f---in' kidding me.” That's almost exactly what I whispered 10 seconds prior, but unlike Haley, I was giggling when I whispered it. 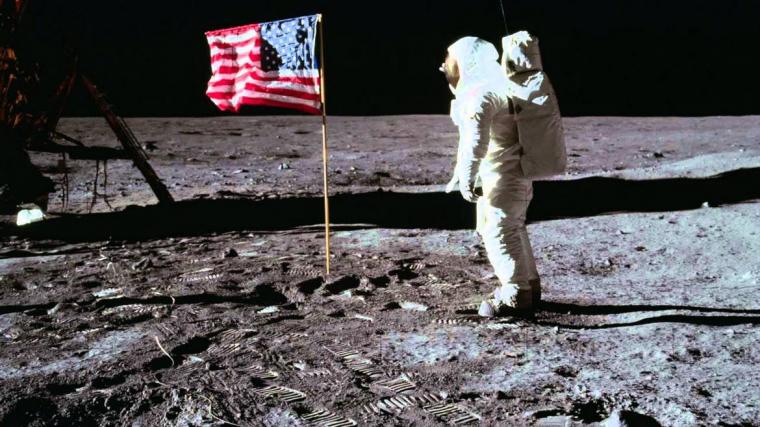 If you attend the Putnam Museum & Science Center's new, 45-minute edu-doc Apollo 11: First Steps Edition and think, “I'm pretty sure I've seen this before,” then good for you, because that means you also caught director Todd Douglas Miller's magnificent, twice-as-long Apollo 11 when it was in area release earlier this year. Employing previously unseen footage from the 1969 trek to the moon along with remastered picture quality and sound, Miller's 90-minute NASA exploration is dazzling, and currently running neck-and-neck with the Aretha Franklin concert documentary Amazing Grace as my favorite non-fiction film of 2019. First Steps Edition is Miller's original film, but cut in half. For those with short(er) attention spans, this might be considered an upgrade, as the debuting edu-doc retains all of the mission's most memorable bits – the launch, the landing, the splashdown – within a streamlined structure that also gives Matt Morton's rousing score a more thorough workout. (Unlike in the film's original release, there's barely a minute here that transpires in silence.) But missing from the movie is any sense of breathing room; there's so much truncating of the original footage that little that happens carries any emotional weight, and Event A leads to Event B leads to Event C so rapidly that we barely have time to take in the scope or any sense of historical import. I'd hardly advise viewers to steer clear of the Putnam's latest, as Miller's outing would likely be remarkable under any circumstances. But to get an idea of what this material can be – and, in its longer incarnation, is – read my Apollo 11 review from this past March. For an idea of First Steps Edition, only read every other sentence.