Cowboys and Injuries: "The Magnificent Seven" and "Storks" 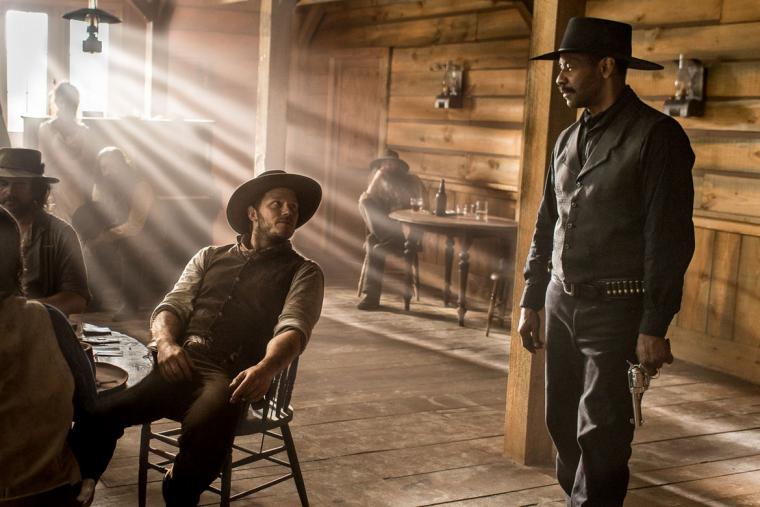 Chris Pratt and Denzel Washington in The Magnificent Seven

Antoine Fuqua’s remake of 1960’s The Magnificent Seven, itself a remake of Akira Kurusawa’s Seven Samurai, isn’t a very good movie. If you’re able to ignore that, however, you can still have a very good time; given the assembled talent, this vengeance-minded Western is practically a triumph of screen charisma and the fine art of iconic posing over middling concerns such as depth of character and historical realism. You may not believe a minute of it, but you may be grinning too hard to care.

Set in 1879, The Magnificent Seven boasts a narrative that’s almost classically Greek in its simplicity: A murderously evil land baron and his henchmen take over a peaceful mining community, and a rogue’s gallery of killers is recruited to take it back. Personally speaking, I don’t need my Westerns more complicated than that. I certainly don’t when the resident psychopath is portrayed by my favorite living actor, Peter Sarsgaard, whose Bartholomew Bogue is a figure of nearly jaw-dropping insidiousness and malice. (Sarsgaard’s first scene – one of only three, sadly – finds him burning down a church and killing Matt Bomer, and you’re pretty sure the guy hasn’t remotely hit his depths of depravity.) And I also don’t require added nuance when the recruited heroes are as unfailingly entertaining as the ones amassed here. Denzel Washington, looking impossibly sleek, is the Nebraska warrant officer on Bogue’s trail; Chris Pratt, at his Pratt-iest, is a sardonic cardsharp and master gunslinger; and the warrior eccentrics joining them are Ethan Hawke, Byung-hun Lee, Manuel Garcia-Rulfo, Martin Sensmeier, and Vincent D’Onofrio, the latter one of only a few castmates who look and sound the least bit 19th Century. For Western traditionalists, I’ll admit, this might be something of a deal-breaker. It’s probably one thing to accept Fuqua’s heroic septet as the most aggressively PC fighting unit in the Wild, Wild West, outfitted as it is with an African-American leader, an Asian-American, a Mexican-American, and a Native American. (What would the Duke have said about this?!) But what’s more unfortunate is that except for D’Onofrio – who’s like Gabby Hayes reincarnated as Orson Welles – and the unexpectedly credible Haley Bennett as a grieving-with-a-gun widow, no one seems to make much effort toward period veracity. Not the other actors, with their decidedly modern bearing and flip readings; not screenwriters Richard Wenk and Nic Pizzolatto, who provide a stable full of ironic gags for America’s favorite wisenheimer Pratt; and not the production designers, whose dishearteningly bland sets and Main Street façades look indistinguishable from those Universal Studios back-lot locales you walk through on your way to the Psycho house. It all feels like a big – and, given its $95-million price tag, big-budget – game of grown-up dress-up. Thankfully, though, the game is oftentimes plenty of fun.

Once you accept the inherent blitheness, and accept that the movie is by the director of The Equalizer and not Unforgiven, it’s easy to be jazzed by the superb stuntwork and thrillingly rendered effects, some of the best involving thrown knives and whizzing arrows. All of the action scenes, in truth, are excitingly well-choreographed, and, even better, they make sense; especially in the climactic battle royale, Fuqua admirably establishes the geography so we’re aware of both how and why characters are where they are. And even if you don’t get much indication that the director has any particular affinity for Westerns, Fuqua certainly seems fond of their iconography, and appears to revel in the genre’s inherently satisfying tenets: the faraway shot of silhouetted men on horseback against a golden sunset; Garcia-Rulfo twirling his six-shooter; the piano music instantly stopping when an unfamiliar visitor moseys into the saloon. Fuqua’s Magnificent Seven may be more of a Not-Bad Seven, but it’s an engaging and fast-paced 130 minutes, and Denzel Washington – the only conceivable American star for this particular film – is spectacularly fierce, magnetic, and masculine. Hell, at one point, the man even eats raw deer liver on-screen, but, unlike DiCapiro, you won’t hear Washington braggin’ about it. The too-cute-by-half previews for the animated Storks filled me with apprehension. The movie itself filled me with pure, undiluted happiness. Climaxing with the end-credit news, previously unknown to me, that this screwball enchantment was written and (with Doug Sweetland) directed by Nicholas Stoller, I was astonished at how many gloriously weird, wonderful curveballs were thrown at us, and maybe more astonished that I laughed harder here than I did at Stoller’s Forgetting Sarah Marshall and Neighbors combined. I’m not going to offer a plot synopsis, which, given the narrative randomness, wouldn’t matter anyway. See it – and bring the kids if you’d like! – for the hysterical comic byplay of vocal leads Andy Samberg and Katie Crown. For Keegan-Michael Key and Jordan Peele as snarling alpha and beta wolves. For their wolf pack with Wonder Twins powers. For Kelsey Grammer doing a Sideshow Bob. For the obscenely cute infant. For the obscenely funny attempts at getting said infant to sleep. For the sotto voce fight scene because the baby is sleeping. For the slow, painful escape from the glass factory. For the least adorable penguins ever. And, with dozens of additional reasons going unmentioned, for the storks’ baby-delivering brochure that references Braxton Hicks contractions. The visual speeds by too fast to see just what’s said about them, but you can find out if you eventually watch Storks again on home video. And trust me: You’ll want to.