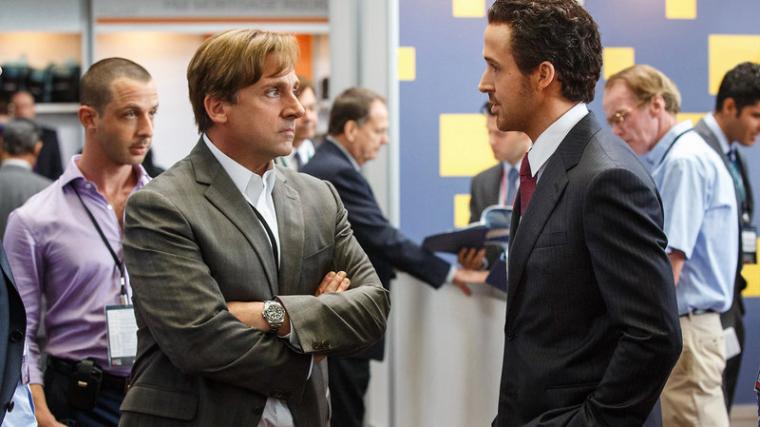 After his recent viewing of The Big Short - director/co-writer Adam McKay's tragicomedy about the 2008 financial crisis - a friend succinctly denigrated the film as "Wall Street for Dummies." I hereby cop to my dummy-hood. Because not only did this swift, vital, sensationally entertaining movie teach me more about the global market crash than I would've thought possible, but the info might not have fully sunk in if salient details weren't explained so thoroughly by Selena Gomez.

Refuting the common misconception that no one forecast the full extent or impact of the crash, The Big Short follows three parties who, beginning in 2005, actually did, and were determined to make a mint off bankers', brokers', and government agencies' negligence. One is fund manager Michael Burry (Christian Bale), who wagers tens of millions in client money on the presumed accuracy of his number-crunching. Another is the best-bud duo of Charlie Geller (John Magaro) and Jamie Shipley (Finn Wittrock), two hedge-fund upstarts who fortuitously land on a prospectus predicting financial doom. And yet another is disillusioned Wall Street trader Mark Baum (Steve Carell), who, along with his motley team of associates (Hamish Linklater, Rafe Spall, and Jeremy Strong), becomes convinced of the impending meltdown through the unassailable evidence and floridly earnest prophecies of investor Jared Vennett. It's never mentioned whether Baum and company also buy into Vennett's well-rehearsed spiel because he looks and sounds just like Ryan Gosling. But if that were the case, you could hardly blame them, considering that Vennett/Gosling certainly seduces the audience with no visible effort.

Admittedly, my defenses were up quite early into The Big Short, given that within its first minutes, Vennett was directly addressing the camera, and insisting, with patronizing sweetness, that the dry, intentionally confounding financial lingo to come might be a bit lofty for us mere mortals. I readied myself for a Gosling-meme take on Leonardo DiCaprio's hand-holding in The Wolf of Wall Street. But McKay's movie - and not for the last time - was way ahead of me, because instead of dumbing down the intricacies of his conversation, Vennett simply said, "So here's Margot Robbie in a bubble bath to explain." And bam! There was the Wolf of Wall Street co-star, sipping champagne in a bubble bath, guiding us through the ins and outs of shady economics. McKay's and co-writer Charles Randolph's "This'll get the bros' attention" joke was as perfect as its casting (the casting, at heart, was the joke), and all throughout the film, Vennett breaks the fourth wall with narrative interruptions that are both amusing and insightful. Vennett has economist Richard Thaler and the aforementioned Gomez break down the business of synthetic collateralized debt obligation (CDO) at a blackjack table, and introduces Anthony Bourdain so the chef can compare CDOs to fish stew. He kindly informs us when the on-screen events differ from how they transpired in life ("I would never have been caught dead in a bar like this"), and when they're wholly accurate (as when Baum, at a Las Vegas convention, hijacks the panel discussion with an incensed tirade, only to immediately cut it short when his cell phone rings). Yet these spiky detours aren't there merely to allow creator McKay some release of his Funny or Die comic spirit. They're there to underline the fundamental ridiculousness of a system that allowed such blatant financial corruption to ever take place, and to serve as contrast for the decidedly unfunny effects of our culture of unbridled greed. The Big Short is frequently riotous, but the laughs have sobering and sickening edges; without crossing over into outright hectoring, McKay never stops reminding us of the consequences of all of this Gordon Gekko-approved celebration. (When Geller and Shipley gloat over the millions they're due to make, their mentor Ben Rickert, played by Brad Pitt, curtly informs them of how many thousands of Americans die every time unemployment rises by 1 percent.)

What McKay and Randolph pull off with their smart, adventurous screenplay (based on a bestselling nonfiction by Moneyball author Michael Lewis) is spectacularly tricky stuff: They get you to root for our "heroes" to make untold, and ethically unsound, fortunes thanks to disastrous decisions that will effectively cripple the worldwide economy. And it's probable that the writers wouldn't have succeeded half as well without an ensemble as sterling as The Big Short's, with everyone from the leads to the bit players feeling equally grounded in McKay's absurdist reality. (This is true even of Christian Bale, who can be an intensely tic-y actor, and whose role as Burry offers more tics - glass eye, symptoms of Asberger's, penchant for death metal - than even he should know what to do with.) Yet the film is above all a triumph for its director, none of whose credits have remotely prepared us for an experience this smart, stylistically varied, and ultimately devastating. McKay may be famous for Anchorman, but it's a thrill to see that he's more than capable of delivering something with true weight. Will Smith is the best reason to see writer/director Peter Landesman's dramatic exposé Concussion, and that would've been happier news if there weren't so few reasons to see it at all. Based on Jeanne Marie Laskas' GQ article "Game Brain," this true-life tale follows Smith's Nigerian pathologist Bennet Omalu as he tries to prove the existence of a disease eventually called chronic traumatic encephalopathy (CTE), a brain malady caused by repeated blows to the head - specifically, the brutal crunch of one football helmet making repeated contact with another. It's a discovery that, in the film's 2002 setting, would explain a recent rash of mental breakdowns and suicides among professional football players. But as Omalu learns, it's also one that the litigation-wary NFL would rather not acknowledge, and the subject matter alone gets you initially jazzed for Concussion, leading you to expect a David-versus-Goliath whistle-blower saga in the style of The Insider or Erin Brockovich. Concussion is kind of like those movies, and would be more so if you surgically removed all traces of complexity, nuance, and peril.

One of the biggest problems here is that, barring the rare menacing phone call and suspicious car, it doesn't boast any true danger. Dismissive NFL suits - embodied here by Luke Wilson, Arliss Howard, and, for all of one line, Paul Reiser - merely wave off Omalu's medical theories with a smile or shrug, and the doctor's chief troubles are less life-threatening than monetary ... and even then, it's not really the NFL's fault. (Omalu faces financial ruin because his own hospital makes him pay for the costly CTE tests.) But the biggest problem is that the film has been thought out in such achingly simplistic, TV-movie terms. Designed as peerlessly noble and good and, therefore, really uninteresting, Omalu endures the expected skepticism of his peers and bureaucratic red tape, and, of course, has the requisite Long-Suffering Spouse (an insultingly under-utilized Gugu Mbatha-Raw) to offer one pithy nugget of support after another. But these genre staples are so overly familiar, and handled by Landesman with so little variety and excitement, that the movie - despite some fine moments with Albert Brooks, Alec Baldwin, David Morse, and Adewale Akinnuoye-Agbaje - quickly turns into a snooze. Only Smith's consistently focused portrayal, muted charisma, and lilting Nigerian dialect keep you alert on a regular basis, and he's sadly forced into doing more heavy-lifting than he should, attempting to inspire legitimate interest in a man who, by all evidence, doesn't have a flawed bone in his body. Not to make light of its subject, but I left Landesman's film thinking the only remedy for this particular Concussion would be a Red Bull and a NoDoz. David O. Russell has been on such a crazy-good roll of late with 2010's The Fighter, 2012's Silver Linings Playbook, and 2013's American Hustle that I guess we were due for a bummer. But were we due for one as stunningly ill-conceived as Joy, a desperately confused outing in which everyone on-screen aside from the title character appears to be suffering from mild to severe blows to the head? (This is the movie that should've been titled Concussion.) Purportedly a bio-pic - if a factually loose one - about entrepreneur and Miracle Mop inventor Joy Mangano, writer/director Russell's latest is more accurately a serio-comic squabbling-family saga in the vein of The Fighter or Silver Linings. The difference, though, is that the shrieking nutcases in those films were actually entertaining, and here the theoretically sympathetic dullards played by Édgar Ramirez and Diane Ladd are just as fraudulent, and just as annoying, as the grating monsters played by Robert De Niro, Isabella Rossellini, Virginia Madsen, and Elisabeth Rohm. Not only can you not comprehend how lead Jennifer Lawrence is giving such a smooth, controlled performance amidst their overscaled cartoonishness; you can't fathom how she's keeping her basic sanity.

But this is a film in which one set piece after another reads as resoundingly phony: the snippets of televised soap opera watched, day and night, by Joy's bedridden mother (and acted by soap vets including Susan Lucci and Laura Wright); the scenes of Joy and others hawking their wares for a loquacious QVC producer (Bradley Cooper, a quieter cartoon than the others); Joy housing both her dad and ex-husband in the basement and separating the testy roommates' living quarters with a roll of toilet paper. The humor is slapstick-y one moment and Capra-sentimental the next, and never before has Russell appeared to have so much trouble navigating his way through conflicting tones. (His movies have never appeared so haphazardly edited, either; at one point, we see Joy resting her elbow on a mantle, and in the next shot she's standing two feet in front of the mantle.) Lawrence has so much earned, built-in audience empathy and so much screen presence that she easily glides through the picture unscathed, even though, as usual in her Russell collaborations, she's noticeably too young for her role. Lawrence's considerable gifts, however, aren't enough to salvage a movie that's this frequently jaw-dropping in its inanity. In three of the last six Christmas seasons, David O. Russell delivered loads of wonderful surprises. But one surprise I didn't want? Finding Joy and winding up depressed.