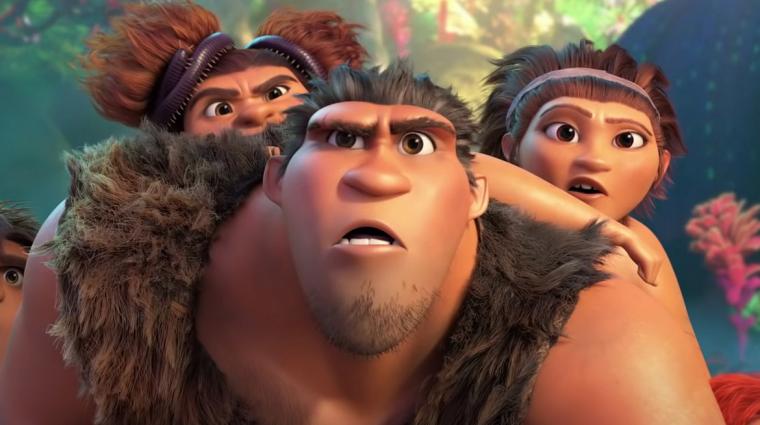 The Croods: A New Age

THE CROODS: A NEW AGE

The animated-comedy sequel The Croods: A New Age is like an elongated, best-ever episode of The Flintstones, and I mean that as a compliment even though I never really cared for The Flintstones. Beyond the basics – prehistoric era, wacky animals, a Stone Age cutie appropriately voiced by Emma Stone – I didn't remember much about the 2013 hit that preceded this long-delayed follow-up, and truth be told, despite spending another 90-ish minutes in its characters' company, I still don't. Yet it might be a long while before I forget director Joel Crawford's lively and colorful outing, or at least its endearingly goofy particulars, and not just because the title will no doubt be an answer in a future edition of Trivial Pursuit. (“Oh, right … that was the only movie to get a nationwide release during Pandemic Thanksgiving!”)

In this busy saga that finds our heroic Crood crew encountering a more enlightened family whose surname is literally “Betterman,” a fine time could easily have been had if the film were merely devoted to a feature-length battle of wills between Nicholas Cage's grouchy, hirsute Grug and Peter Dinklage's comparatively suave Phil. (I didn't laugh out loud a lot at A New Age, but whenever I did, it was generally due to either Cage's delightfully passive-aggressive readings or Dinklage offering well-meaning condescension while flopping his wrists like Alexis on Schitt's Creek.) But even though the other narrative threads aren't nearly as entertaining, they're filled with wonderful touches: Stone's Eep and Ryan Reynolds' Guy vainly searching for a private place to kiss; Catherine Keener's Ugga and Leslie Mann's Hope Betterman trading mildly hostile pleasantries; Clark Duke's dopey teen Thunk marveling at a foreign invention called a “window” and joyfully staring at it 24/7; Cloris Leachman's Crood elder Gran emerging as an Imperator Furiosa-level ass-kicker. (Hell, just hearing 94-year-old Leachman in superb vocal-comedy form is reason to cheer.)

And from the feral chomping of Baby Sandy to the physicalized conversations of the aptly named Punch Monkeys, the visual gags are usually as solid as the verbal ones, though I wouldn't necessarily say the same for the song selections. (After nearly 50 years, isn't it time to finally remove the Partridge Family's “I Think I Love You” from the rom-com repertoire?) Quibbles aside, though, The Croods: A New Age is a mess of fun, with bonus points earned for the three increasingly hysterical instances in which creatures shriek upon getting sharp objects poked into their eyes. Just don't try this at home, kids. It's really only funny if it happens to an animated bird. Or an animated metrosexual voiced by Peter Dinklage. 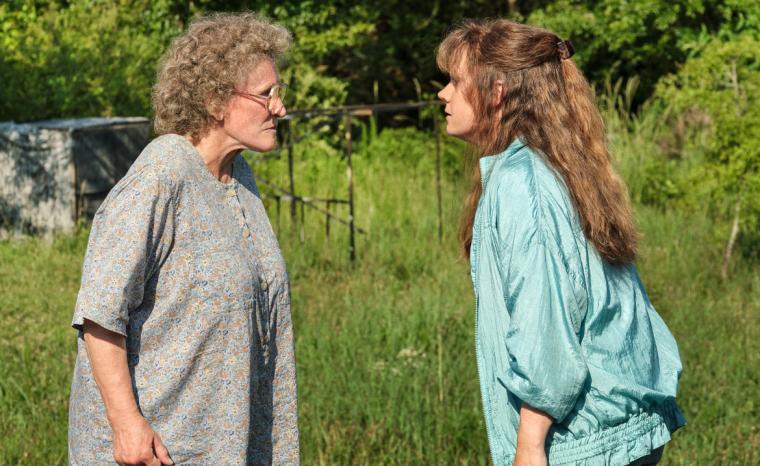 If you trust the collective tenor of the reviews, 2020 has finally found its Cats – by which I mean its steaming pile of cinematic manure courtesy of a starry cast and Oscar-winning director – in the new Netflix drama Hillbilly Elegy, Ron Howard's take on J.D. Vance's bestselling 2016 memoir. Not having read the book, I won't venture a guess as to what might have gone wrong (if, indeed, anything did) in the translation from print to screen. But I can speak to the Cats comparison, which, it turns out, is colossally unfair … to Cats.

Tom Hooper's fur-lined musical was at least an enjoyable train wreck. Cats may have been batshit-crazy, but in its escalating ridiculousness, wrongheadedness, and ineptitude, the movie did come close to achieving a kind of loopy bravado. Nextflix's more “dignified” spectacle, by contrast, is just sad, confounding, and no fun at all. (While admitting that Howard's movie isn't necessarily designed to be “fun,” it could have at least been gripping in the manner of Netflix's numerous depressing-as-hell-but-riveting documentary series.) Everyone involved appears to have gone to enormous lengths to create something warm, wise, and moving – everything that was Ron Howard's middlebrow stock-in-trade 20-odd years ago. Based on the film's overall tone, though, Howard doesn't appear to have thought out Vance's story in any way beyond “Oscar bait,” so what results is the sorry sight of a lot of hard-working professionals showing you just how hard they're working while suggesting that they're never quite sure what they're working toward. Hillbilly Elegy isn't Cats. It's just characters yowling like cats.

Amy Adams yowls the loudest, and the least convincingly. In its non-chronological telling, Howard's and screenwriter Vanessa Taylor's adaptation primarily concerns author J.D. (played as a boy by Owen Asztalos and as an adult by Gabriel Basso) as he endures a difficult childhood as kin to fiercely proud Appalachians relocated to Ohio, and contends with systemic prejudices while a graduate student at Yale. None of these scenes play as genuine – this kid was admitted to Yale but still doesn't know what a salad fork is? – and they aren't aided by both Asztalos and Basso coming off as personality-free ciphers; these two should star in a spin-off titled Bland & Blander. But you never have to worry about their dullness for long, because every few minutes, Adams shows up as J.D.'s profanity-spewing, drug-addled mama Bev, and if there's been a more nakedly desirous, disastrously ineffective grab for an Academy Award over the past few years, I'm not sure I saw it. Screeching, sobbing, pleading, histrionic to the point of exhaustion (hers and ours) – this performer who's so traditionally adept at subtle emotional inflections and transitions ramps everything up to 11, and it's almost embarrassing to watch. Adams is clearly working overtime to keep us invested, but because Howard and Taylor never give us any particular reason to care for Bev, and because they and Adams don't seem to have a handle on how Bev is meant to be perceived (Monster? Tragic victim of circumstance?), we have no way to react but to stare at the unresolved acting feat and think that less would have undeniably been more. 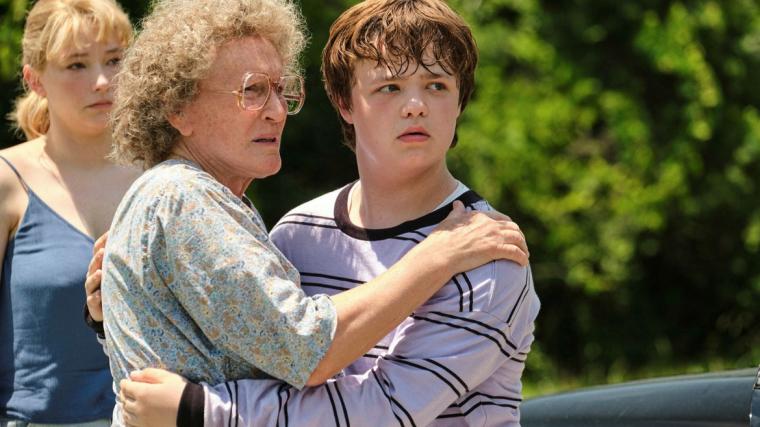 The same goes for Glenn Close's family matriarch. As photos shown over the closing credits make evident, the heavily made-up Close uncannily resembles the actual Bonnie “Mamaw” Vance right down to the frizzy Afro, omnipresent cigarette, and shirts that look like Ebenezer Scrooge's bedwear. But Close, a stage-trained actor who's frequently amazing but can sometimes be a lot to take, is a lo-o-o-ot to take here. Meant to be the film's supplier of folksy wisdom and tough love, Mamaw curses and threatens and dispenses such pearls of pop-culture insight as “There are three kinds of people: good Terminators, bad Terminators, and neutral.” (What in God's name is a neutral Terminator?!) Yet she's nothing but a laborious cartoon. While the externals are there, Howard and Taylor, again, show so little interest in Mamaw as a person that Close's over-the-top character aggression is all you see.

It's possible that Close and Adams are giving Howard exactly the outsize performances he wants, but in truth, there's really no telling what he wants from Hillbilly Elegy. (It certainly can't be visual flair: With the possible exception of his Star Wars prequel Solo, every Ron Howard release looks indistinguishable from an Emmy-winning TV-movie circa 1985.) Howard comes off as such a tourist in this unfamiliar, impoverished milieu that you can't even tell if we're meant to view J.D.'s escape as a successful break from his mother or an indication, and indictment, of how prep-school snobbery has forced him to unwisely turn his back on familial love, pride, and obligation. Offhand, I can think of more than a dozen directors – among them Debra Granik, Kelly Reichardt, and Sean Baker – who would have likely handled this material with more sensitivity and clarity, and sadly, Howard's latest doesn't boast one believable sequence, line, spontaneous moment, or, with the possible exception of Haley Bennett's, portrayal. (Poor Freida Pinto is required to nearly literally phone in her role as J.D.'s unfailingly devoted, unfailingly boring love interest.) Amy Adams and Glenn Close currently have 13 Oscar nominations between them with no wins. That's not right. One or both of them winning for Hillbilly Elegy would be even less right. 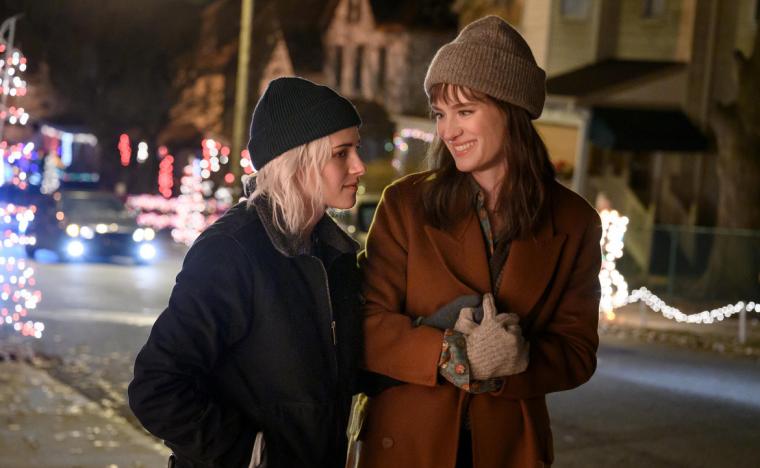 One of the personal perks to cineplexes not securing any new releases beyond the Croods sequel over Thanksgiving weekend was that we were at least spared the annual family comedy in which a large, boisterous clan gathers for a holiday and winds up fighting and revealing long-held secrets and crying and hugging – a 2020 version of Love the Coopers or The Family Stone or something else starring Diane Keaton. (Love ya, Diane, but you do make a lot of these things.) Yet because I'm clearly a masochist, I deliberately watched writer/director Clea Duvall's Happiest Season after it landed on Hulu last week, and wound up more than happy that I did; this yuletide morsel is frequently obnoxious in the expected ways, but also sweet and touching and, in the end, rather brave.

A family-reunion dramedy whose claim to originality lies in its romantic leads being a lesbian couple played by Kristen Stewart and Mackenzie Davis (the latter of whose Harper is still closeted to her parents and siblings), the movie's failings are rather obvious: paper-thin characterizations; a vacuously cheerless visual style; a misguided slapstick scene in which a gorgeous Christmas tree inevitably crashes to the floor. But Duvall's movie has heart and good-natured humor to spare, as well as a bona-fide cliffhanger at its core: Will Stewart's openly gay Abby stick with her longtime love despite the woman's seeming disinterest in telling her relations the truth, or will she instead take off with the beautiful, funny family friend Riley, with whom Abby has instant, tremendous chemistry?

I truly never expected a film as generically spirited and fundamentally surface-level as Happiest Season to deliver such a subversive plot twist. Then again, I also never imagined that the traditionally (and brilliantly) curt and sardonic Aubrey Plaza, who plays Riley, would ever be this relaxed and mature and devastatingly warm on-screen; even if you like Mackenzie Davis, and I very much do, I couldn't help thinking that Stewart (who's tender and lovely here) might have chosen an incorrect match from the get-go. Co-written by co-star Mary Holland, Duvall's movie probably doesn't have much chance at becoming a seasonal standard. But it's unfailingly entertaining and unexpectedly trenchant in its handling of the leads' self-analysis, and its supporting cast is divine: Victor Garber, Alison Brie, Dan Levy, Ana Gasteyer, and the radiant Mary Steenburgen, who takes on the role usually enacted by her Book Club co-star Diane Keaton. As with Keaton, I may grow tired of Steenburgen in holiday-comedy mode after six or seven similar outings, but for now, she's a gift that keeps on giving.