Crouching Tyro Hits a Dragon: “Shang-Chi & the Legend of the Ten Rings” and “Cinderella” 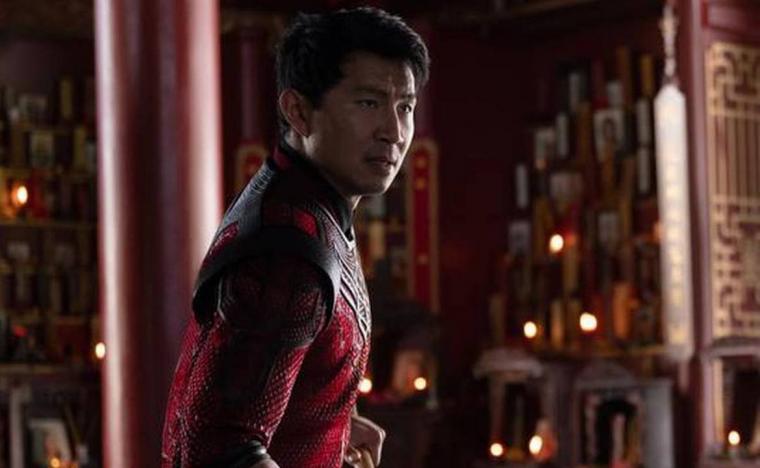 Simu Liu in Shang-Chi & the Legend of the Ten Rings

SHANG-CHI & THE LEGEND OF THE TEN RINGS

It's always irritating, as a reviewer, when the one movie element you most want to write about is the one you really can't write about, at least without incurring the wrath of the Spoiler Police. That being said, regarding Marvel Studios' Shang-Chi & the Legend of the Ten Rings, I'm pretty sure I can report that a face familiar from the Marvel Cinematic Universe shows up roughly halfway through the film, and that this character's reappearance, at my screening, was greeted with hearty laughs and even a smattering of applause. I think I can state that the unanticipated arrival was both wildly illogical and, somehow, kind of perfect. And I'm reasonably certain my fellow patrons would agree that ______'s return was the easy highlight of writer/director Destin Daniel Cretton's superhero epic – one of those “No way!” narrative delights that occasionally land in this genre at the exact moment you most need it to. It's a shame I can't write about it.

An introduction to the martial-arts master and eventual world-saver who debuted, in comic-book form, in the 1970s, Cretton's MCU outing is prototypical origin-story world-building to its teeth. Our hero (Simu Liu) is a San Franciscan slacker going by the name of Shaun, a young man seemingly content to park cars by day and sing karaoke at night alongside his equally unmotivated bestie Katy (Awkwafina). As we learn, however, through a series of increasingly tedious flashbacks, Shaun is actually Shang-Chi, a Chinese native whose deceased mother Ying Li (Fala Chen) was the peaceful-warrior guardian of a mystical empire, and whose father Xu Wenwu (Tony Leung) is the homicidal, evidently immortal ruler of terrorist dynasty the Ten Rings. Consequently, in short order, Dad's cronies come to America and steal Shang-Chi's heirloom pendant; Shang-Chi's hidden identity and martial-arts skills are revealed; Shang-Chi and Katy travel to China to reclaim the keepsake; Shang-Chi's long-estranged sister Xu Xialing (Meng'er Zhang) gets involved; Dad entices Son into joining the family business; a plot to destroy humankind is uncovered … . You know. Typical family stuff.

Yet in an unexpected change-of-pace, it wasn't the family stuff I relished in Marvel's latest; it was the action scenes. Not two months after the release of Black Widow, I still admire that film's portrayals, but the only combat sequence I genuinely recall was that pointless slugfest between Scarlett Johansson and Florence Pugh. (While it makes slightly more sense here, Shang-Chi also features a sequence in which siblings beat the ever-loving crap out of each other. Does the Marvel brain trust perhaps need to collectively speak to a therapist about this trend?) Cretton's movie, though, boasts a bevy of terrifically sharp and well-choreographed set pieces that are bound to stick in memory. 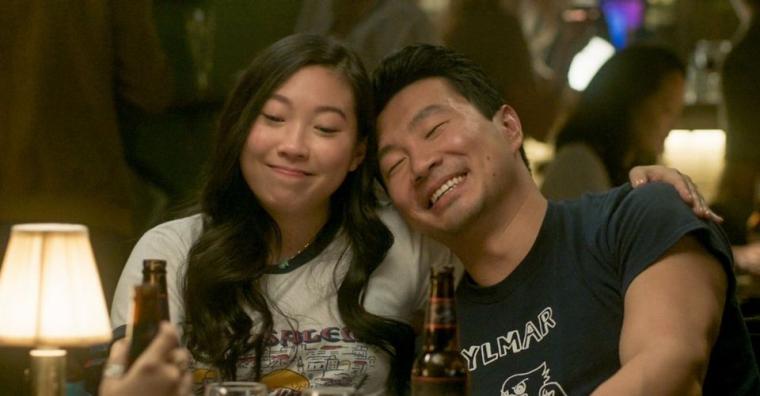 That initial Ten Rings attack on a moving city bus may be the most entertaining one. Between Liu obviously performing much of his own stuntwork and Awkwafina desperately guiding the vehicle through downtown traffic – in hilly San Francisco! – this funny, exciting, smartly shot scene plays like shrink-wrapped Speed. But the tightly edited cat-and-mouse that takes place on the exterior of a Chinese skyscraper delivers similar giggles and thrills, as does a later sequence of Shang-Chi and company driving through a forest of collapsing trees. And although the dragon-on-dragon climax eventually made my eyelids heavy in that repetitive Godzilla vs. Kong manner, there was just enough tactile beauty in the monstrous creatures and their movements to keep the imagery alive, if not necessarily fresh.

All of Shang-Chi, though, even the moments that really worked, could've done with a freshness upgrade. Sure, it's commendable that it “only” took Marvel Studios 25 movies to get to the one with an Asian lead and almost universally Asian supporting cast. Yet despite being an appealing presence and a first-rate martial artist (one who keeps landing in that poised Black Widow crouch that her sister made fun of), Liu's title figure never emerges as legitimately interesting, saddled as he is with the requisite daddy issues, mommy issues, sibling issues, and gradual overcoming of a tragic past. Awkwafina is amusing/obnoxious in the traditional Awkwafina ways, and the great Michelle Yeoh, as the guardian taking over for Shang-Chi's departed mother, appears to be around solely to rekindle fondness for Crouching Tiger, Hidden Dragon.

As for the hidden-paradise community that Yeoh protects, it's predictably Wakanda-lite, a gorgeous but rather predictably designed Eden that's a fundamentally dull place to visit – Shangri-La with a touch of Maurice Sendak. (Among its race of unusual creatures are ambulatory throw pillows with dragon wings, one of whom is the cutesy-poo best friend of ______. Expect your kids to demand stuffed-animal versions for Christmas.) Only the magnetic, disarmingly moving Leung transcends the formulaic storyline and emotional banality, his quiet psychopath the rare Marvel über-villain whose nefarious obsession, not unlike Thanos', appears born less of rage than grief.

Despite its disappointments, though, there's still a lot of enjoyment to be had in Shang-Chi & the Legend of the Ten Rings, from the spirited sweeps and feints of cinematographer William Pope's camerawork to Liu's and Awkwafina's playful early repartee to the one scene we get of San Franciscan Shaun's family life – a sweetly squabbling domestic bit that'll hopefully be expanded in the inevitable sequel. And enjoyment is absolutely found in the laugh-eliciting return of ______, who is not to be confused with the returning ______ I referenced earlier, nor the brief end-credits visitors ______ and ______. If Marvel keeps upping its surprise-cameo ratio at this rate, my critical irritation will likely increase. But at least the writing of these reviews will become so ___ing easy I might just ___ my ___ing pants. 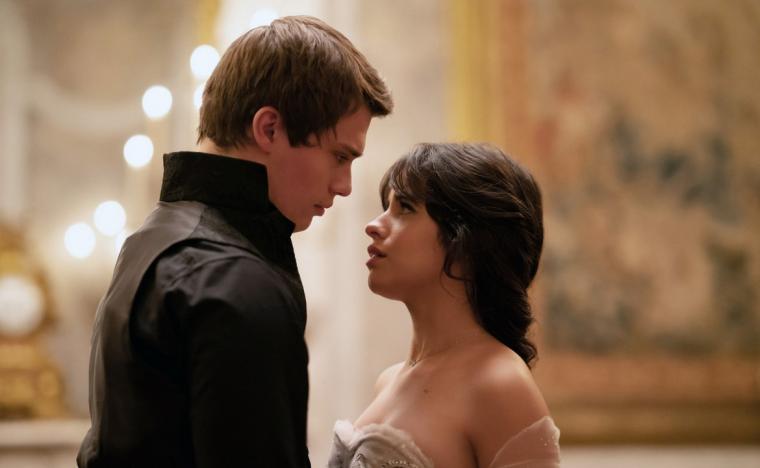 Every generation probably gets the Cinderella it deserves. Happily, though, the question regarding writer/director Kay Cannon's Cinderella musical that debuted on Prime Video this past weekend isn't “But what have we done to deserve this?” It's more like “But why didn't this debut a good 10 years earlier, back when Glee was still a thing?”

I'm not saying this hyperactive pastiche of top-40 hits and woke sensibilities doesn't feel sufficiently 2021, because it does, kind of: Camila Cabello's Cinderella isn't interested in matrimony so much as a clothing empire; her prince (Nicholas Galitzine) has a far more qualified sister (Tallulah Greive) ready to inherit the crown; Billy Porter cascades glitter as the Fabulous Godmother. But the ultra-bright packaging, obvious musical cues, unapologetic schmaltz, and relentlessly busy yet resolutely unmemorable choreography all scream Ryan Murphy circa 2011, and Cabello, though clearly gifted in some areas, boasts a specific singing voice that grates just as much now as it did a decade ago, with nearly every lyric opening with a low-key growl that speedily morphs into auto-tuned baby talk. While Cannon's Cinderella is undeniably designed for kids (or at least kids who'll recognize a veiled masturbation gag), there's something creepily infantilizing about the experience – as if we all lose 10 years while watching it. When this aggressively cheery, almost entirely conflict-free entertainment finally concluded, I was more than ready for a box of juice and a nap.

As with most Glee episodes, however, I can't pretend I wasn't frequently charmed. The attractive leads don't provide much in the way of charisma, but Galitzine does a fine job of showcasing Queen's “Somebody to Love,” and Idina Menzel, as Cinderella's not-so-wicked Stepmother, treats us to a topnotch rendition of Madonna's “Material Girl.” Minnie Driver, dry as sandpaper, is delicious as the prince's sensible mom, and just when we begin bemoaning the appearance of Mamma Mia! co-star Pierce Brosnan as her husband – “Oh God … is he going to sing again?!?” – Driver beats us to the punch with a reminiscence of her spouse serenading her “with your skull-splitting voice.” (Yes, Brosnan sings here. Yes, it's typically excruciating. This time, though, it's meant to be, and Brosnan is wonderful when telling his son “I don't make the rules – I'm just the King.”) The self-referential jokes are largely winning; Doc Brown's rapping Town Crier is fitfully amusing; the royal choir that sings in Greek-chorus format is a too-rarely-heard hoot. All told, this Cinderella came close to winning me over. And even if, in the trailer, the quick reveal of producer James Corden made you flinch, know that he's not in the movie much at all, even though it would've been appreciated if this ubiquitous musical presence had given someone else a shot at the human version of one of Cinderella's helpful pet mice. Or is this simply penance for Corden playing one of Andrew Lloyd Webber's cats?