Culture Pop: “Ready Player One,” “The Death of Stalin,” and “Oceans: Our Blue Planet” 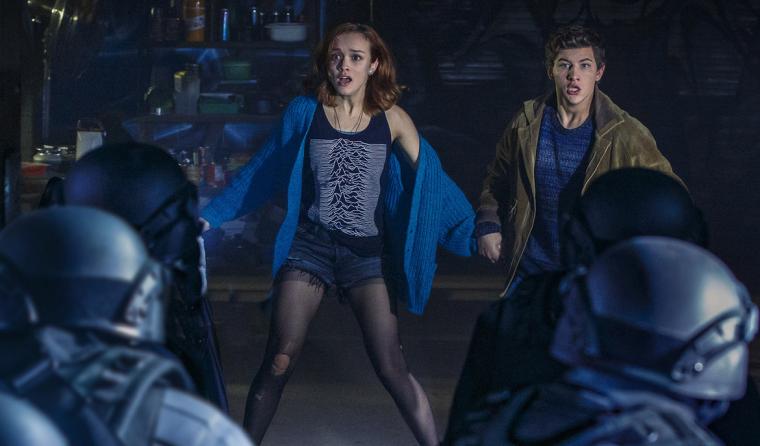 Olivia Cooke and Tye Sheridan in Ready Player One

Adapted from Ernest Cline's famed sci-fi novel and set in the dystopian 2045 of Columbus, Ohio, Steven Spielberg's Ready Player One is about a teen gamer (Tye Sheridan's Wade Watts) who, like millions of others, enters a worldwide virtual-reality competition intent on finding a hidden Easter Egg that will reap him untold fortune. This is no knock against Spielberg's generally exhilarating, occasionally frustrating, frequently jaw-dropping entertainment, but considering the film runs 140 minutes, I'm rather astounded that the kid didn't find the thing within the movie's first seconds. Because good God is this thing lousy with Easter Eggs.

It might take many viewings, if not many lifetimes, to properly identify all the overt, tossed-off, obscure, and deeply coded pop-culture references in this cinematic video game on amphetamines – a futuristic Willy Wonka & the Chocolate Factory with Sheridan as Charlie, Mark Rylance (in jeans!) as Willy, and a cast of CGI thousands as Charlie's fellow Golden Ticket-holders, their parents, and the Oompa Loompas. But still, even on an initial viewing: Avatars that include Batman, Freddy Krueger, Marvin the Martian, and Buckaroo Banzai. Nemeses that include King Kong, the Jurassic Park T-rex, and Child's Play's Chucky. (Or, as he's referenced in the film, “F---in' Chucky!!!”) Weapons that include Monty Python's Holy Hand Grenade and something called a “Zemeckis cube,” which reverses time by exactly 60 seconds. (For further Zemeckis-ness, there's also a sporty DeLorean.)

Oh, wait: There's more! A mash-up between the Terminator and the Iron Giant. A dance contest scored to Saturday Night Fever's “Stayin' Alive.” A soundtrack boasting Van Halen's “Jump,” George Michael's “Faith,” and Tears for Fears' “Everybody Wants to Rule the World.” Nods to the John Hughes oeuvre's Shermer High School, plus the sight of a “Save Ferris” T-shirt. And the hands-down-funniest cameo by Alien's chest-burster since Spaceballs. If you've been at all seeped in American pop culture since the late 1970s – and particularly if you stopped paying attention to American pop culture sometime around 1999 – the ceaseless parade of familiar figures, references, and memories on display in Ready Player One is damned near overwhelming. And a good thing, too, because the enjoyment you get from their arrivals should handily offset whatever blah feelings you have toward the underwhelming video-game narrative and traditionally square Spielberg touches.

I might've been fine with the former if Cline's and co-screenwriter Zak Penn's find-the-keys-and-unlock-the-puzzle storyline weren't so blandly, typically enacted by Sheridan's white-boy dullard – a kid who, naturally, is given a feisty teen-girl companion (Olivia Cooke, deserving better) and a trio of pals of color (Lena Waithe, Philip Zhao, and Win Morisaki) sadly relegated to second-banana status. And with composer Alan Silvestri, yet again, doing his best/worst John Williams impersonation, the plot may have been more involving were its chief villain (Ben Mendelsohn) not such an egregious cartoon whose CGI sidekick (voiced by T.J. Miller) was merely an unthreatening cartoon.

Yet Spielberg at least keeps the freewheeling action zipping along beautifully – those 140 minutes actually fly by – and Rylance is a master deadpan comedian here, never more droll than when Egg-ing on the contest's potential challengers with the promise of wealth exceeding “half a million dollars … wait a minute … half a trillion dollars.” Plus, given that onslaught of recognizable tips of the hat, Heaven knows there's always something delightful to look at. For my money, nothing was more thrilling, hilarious, and evocative than the mid-film detour that put us smack-dab in the middle of Stanley Kubrick's The Shining, with Wade Watts and company coming face-to-face with a cavernous ballroom, copiously bloody elevator, and decaying hag in room 237; these might easily wind up my 10 favorite movie minutes of 2018. They might also be the favorites of the teen who exited the film ahead of me, and said to his friend, “Dude, you haven't seen The Shining?! We're watching it tonight!” That guy's in for a great time. Given how deliberately Ready Player One explodes Kubrick's (and Stephen King's) particulars, maybe also a really disappointing one. 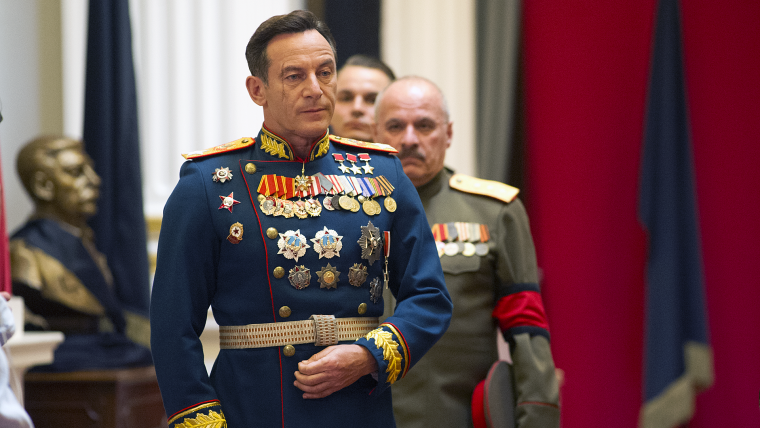 THE DEATH OF STALIN

At the start of co-writer/director Armando Iannucci's thunderously funny, nasty, brilliant The Death of Stalin, a 1953 classical-music recital is being performed live for Russian radio, and as the studio audience applauds its finale, the program's director (Paddy Considine) receives word that murderous dictator Joseph Stalin wants a recording of the concert. There's one tiny problem, though: The concert wasn't recorded. Over the next few minutes of unbridled panic, the director – faced with a half-absent audience, an uncooperative pianist, and a newly unconscious conductor – all but physically moves Heaven and Earth in an attempt to accurately replicate the experience, ordering hasty replacements, agreeing to pay bribes, and pulling homeless citizens off the street to pose as connoisseurs of the arts. (“Please take your seats! Don't worry, nobody's going to get killed!”) The concert is repeated, a recording is made and placed in the hands of Stalin's guards, and the dictator (Adrian McLoughlin) smiles as he listens to a few seconds of the music. Then a massive stroke causes him to collapse. By this point, between the hysterical banter, the perfect timing, and the escalating comic intensity, I couldn't see how Iannucci's slapstick satire could get any better. In retrospect, The Death of Stalin's dazzling prelude might be on the low end of the movie's inspirations.

The film's central concerns are the behind-the-Iron-Curtain machinations that found warring factions attempting to seize power after Stalin's death, with historical figures such as Nikita Khrushchev (Steve Buscemi), Lavrenti Beria (Simon Russell Beale), Georgy Malenkov (Jeffrey Tambor), and Vyacheslav Molotov (Michael Palin) wheeling, dealing, and double-dealing to ensure the swift enforcement of their personal and political agendas. But from the moment that Stalin's body hits the ground (even if the man doesn't immediately die), this madly inventive work based on both historical events and a comic book by Fabien Nury and Thierry Robin delivers one genius set piece after another. A half-dozen of Stalin's closest associates gathered around the dictator's unconscious body, agreeing that perhaps a committee should be formed to find a half-responsible doctor. (All of the good ones have been executed.) One sycophant after another weeping and kneeling at Stalin's side, and promptly jumping up after realizing that they're kneeling in urine. The tortuously slow group haul when Stalin is moved from the floor to his bed. (“We didn't drop him. Well done, us!”) And all this is just five minutes of the film. There's also the riotously ostentatious funeral, and high-pitched melodrama involving Stalin's children (Andrea Riseborough and Rupert Friend), and the unexpected and unwanted release of Molotov's wife from prison, and Jason Isaacs as a bitter Russian Army field marshal … . Dizzying even by the usual standards of Iannucci, the Veep creator whose 2009 In the Loop is one of the millennium's smartest and wittiest satires, The Death of Stalin is a knockout farce featuring devastating one-liners and uproarious work by all, with Buscemi, Tambor, and Palin – all speaking in their natural, non-Russian voices – funnier than they've been in ages. Says Tambor's dumbfounded new ruler halfway through the film: “I have no idea what's going on.” There were times when I didn't, either. But I can't wait to get wise through numerous repeat viewings. 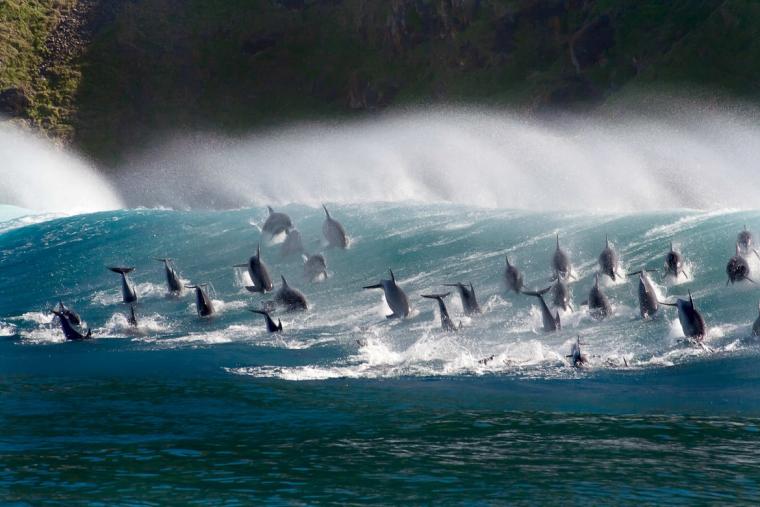 Thanks to my not-infrequent babysitting of an inherently smart and curious three-year-old, I consider myself more well-versed in the exploits of TV's Octonauts than most childless adults my age. Yet even though I've watched numerous segments of that BBC series many times over, and have consequently seen animated representations of all kinds of marine life, I still viewed the Putnam Museum's Oceans: Our Blue Planet with a wide-eyed awe that can only be described as “kiddie WTF?!” Because in visual and aural terms, this thing is gorgeously nuts.

Directed by Mark Brownlow and Rachel Butler, the venue's latest edu-doc – presented by Ocean X Media and BBC Earth – descends many thousands of leagues under the sea for up-close encounters with creatures and behaviors that feel more sci-fi than legit: a fish that uses a makeshift hammer to get at hidden clam meat; an octopus that covers itself in seashells to evade predators; a barreleye, whose transparent head allows it to peer through its own skull. But given the film's employment of state-of-the-art recording equipment, the sounds are just as delightfully insane as the sights, with the astounding coral-reef cacophony accurately described as “noisy,” and the dolphins' communication not unlike hearing balloons being slowly deprived of air – or listening to an aquatic conversation composed entirely of protracted farts. (The movie, after all, is geared toward kids.) It should go without saying that oceanic life is an impossibly huge subject for one 40-minute documentary, and there are elements in the film – such as the current plight of walruses given the unprecedented rising of Arctic temperatures – that you wish had been addressed over 40 minutes of their own. Yet I'm content to wait for sequels, because Oceans: Our Blue Planet is a miniature wonder, and worth a trip to the Putnam just for the intelligence and warmth in the readings of narrator Kate Winslet. Hey, if Kate can be on-board even after losing a priceless necklace and Leo DiCaprio to the ocean floor, we can, too.

For reviews of Tyler Perry's Acrimony, Paul, Apostle of Christ, and God's Not Dead: A Light in Darkness, visit “She Can Do Bad All by Herself.”