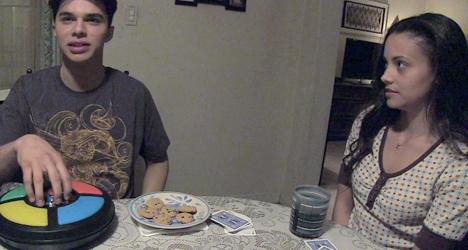 Andrew Jacobs and Gabrielle Walsh in Paranormal Activity: The Marked Ones

PARANORMAL ACTIVITY: THE MARKED ONES

Do you recall how, in the first Paranormal Activity, Katie and Micah attempted to communicate with the malevolent spirit haunting their home through a Ouija board that, later, spontaneously burst into flames? So-o-o 2009. In the new Paranormal Activity: The Marked Ones - the fifth installment in this apparently unkillable scare-flick series - our teenage protagonists aren't about to use anything as passé as a board game to connect with their unseen house guest. Not when they have access to ... Simon.

Remember Simon? That round, electronic version of "Simon Says" from the late '70s with the different colored quadrants that plays musical notes you then have to repeat from memory? (Anyone still at a loss is welcome to visit one at my parents' place, where that blasted thing still trips me up every time I play.) Well, in writer/director Christopher Landon's sequel, Simon gives a dandy little performance in its extended cameo role, and is all the more impressive for only being allowed to show off two of its four colors. Its first scene shows Simon, apparently capable of independent thought, harmlessly chatting with our leads - the green-light sound means "yes," the red-light sound means "no" - before being unceremoniously whisked out of the room by grandma. But Simon really goes to town in its second scene, freaking the kids out with its buzz-y responses to "Is there something you want from me?" ("YES!") and "I want you to leave me alone!" ("NO!") before landing on a musical note that refuses to end until our heroes have the bright idea of taking out the game's batteries. I couldn't have been the only one disappointed to discover that this strategy actually worked; can the spirit world really be silenced by the removal of three AAs? But I was at least grateful for the screen time spent with this fond reminder of my childhood, just as I was in The Secret Life of Walter Mitty when a fantasy sequence found Ben Stiller and Adam Scott racing through Manhattan streets playing tug-of-war with a Stretch Armstrong doll. What next for we lucky Gen X viewers? An inspirational sports drama with winning plays determined by Mattel Football? A remake of WALL•E starring 2XL?

In all truth, I was a little disappointed this past autumn when, for the first time since the original's release, there was no new Paranormal Activity opening around Halloween, considering that I'd enjoyed every odd-numbered entry in the franchise, and was subsequently due to enjoy another. There are, however, certainly worse ways to start a fresh movie-going year than with an effective, low-rent, unpretentious tale of witches and demonic possession, so better late than never. I think we can all agree that, in the 15 years since The Blair Witch Project, the bloom has definitely come off the rose in terms of "found footage" horror movies, which offer a too-convenient excuse for amateurish acting and writing and staging, and which never satisfyingly answer the question, "Why, when they're running for their lives, don't these idiots just drop their video recorders already?!" But while it's old, occasionally irritating news, The Marked Ones still delivers a more-than-fair number of juicy starts and jolts, and Landon's inspiration to set PA's latest in a lower-middle-class Latino community is a fine one, as it lends visual and verbal variety to a series previously overrun with dully privileged Caucasians.

Running a just-right 80 minutes, this tale of the newly possessed 18-year-old Jesse (Andrew Jacobs) and the coven that wants him is typically silly and typically inscrutable; as usual, good-luck charm Katie Featherston shows up here, too, although I'll be damned if I can explain how or why. Yet you can pretty easily block out the film's bigger annoyances by focusing instead on its many creepy grace notes, some of which have the added benefit of also being funny: the body unexpectedly crashing through a car roof; Jesse's battle with a hellishly long hair emerging from his eye socket; the anxious chihuahua spinning in circles on the ceiling. (Yes, our Latino hero has a chihuahua. Take it up with Landon.) It may not reach the highs of PA1 or 3, but Paranormal Activity: The Marked Ones is still an entertaining early-January diversion, and, all things considered, not a bad movie for a fourth sequel. I can hardly wait for the sixth one. In 47 Ronin, the sword-wielding "half-breed" played by Keanu Reeves tells his beloved, prior to their separation, "I will search for you through 1,000 worlds and 10,000 lifetimes." In other words, just a few years longer than the movie felt to me. As director Carl Rinsch's lifeless samurai adventure has already been widely decreed the biggest cinematic bust of the holiday season - bringing in, domestically, a $9.9-million opening-weekend return on a reported $175-million budget - there's really no point in kicking it while its down. So in honor of this generic snoozefest's Japanese setting, I'll restrict my feelings to a simple haiku: