Dante’s Pique: “Inferno” and “Keeping Up with the Joneses” 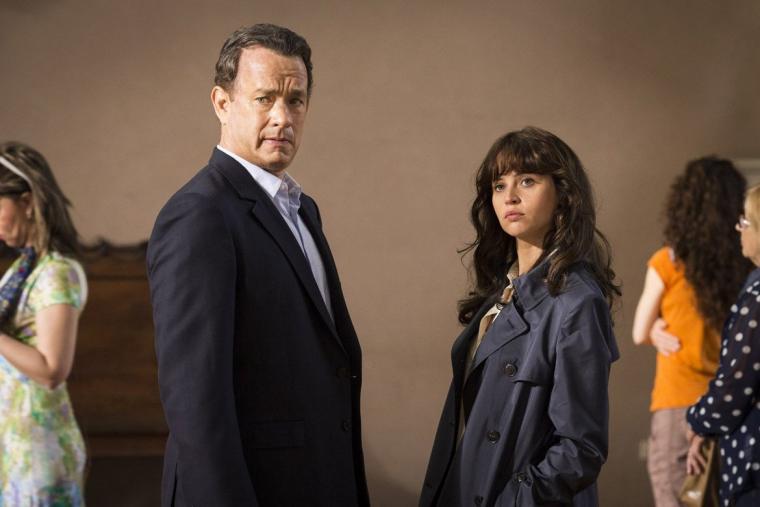 It probably doesn’t need to be said, but over the past five years Tom Hanks has been enjoying a rather spectacular run of creative accomplishments. A brilliant performance in Captain Phillips. Acclaimed turns in Bridge of Spies, Saving Mr. Banks, and A Hologram for the King. Current raves for Sully – his biggest non-animated hit in a decade. Documentary cred as executive producer of CNN’s The Sixties, The Seventies, and The Eighties. Emmy Awards for co-producing HBO’s Game Change and Olive Kitteridge. David S. Pumpkins. Now Hanks stars in Inferno, his third go-around as author Dan Brown’s cerebral action hero Robert Langdon. And all I gotta say is: The run sure was nice while it lasted.

To be fair, Hanks isn’t at all bad in director Ron Howard’s latest Brown adaptation, the third in a film series that previously found globe-trotting symbologist Langdon solving unearthly mysteries in 2006’s The Da Vinci Code and 2009’s Angels & Demons. He’s even a more recognizably human Langdon here, suffering as he is from short-term memory loss that makes the professor routinely question his typically infallible powers of deduction. (Amusingly, in his early scenes, Langdon also fumbles when grasping for the words “anagram” and “coffee.”) Yet in light of so many recent, wonderfully varied achievements, it’s still something of a bummer to see Hanks return to Howard’s and Brown’s dispiriting well of ludicrous plotting, routine foot chases, and incessant art-history lectures. Inferno may move at a zippier pace than its predecessors, but that doesn’t mean there isn’t plenty of time, per usual, to stare at the gorgeously art-directed goings-on and marvel at how many resources and talents were employed in crafting something this profoundly silly.

The latest convoluted mess that Langdon finds himself in involves the titular weapon of biological warfare – a tube-encased plague that Ben Foster’s environmentalist billionaire created to decimate half the world’s population. Langdon, awakening in Italy with head trauma and no recollection of the past three days, has to locate the virus before his nemeses do, a mission aided by his familiarity with Botticelli’s drawings for Dante’s Divine Comedy and his new acquaintance with the helpful Sienna Brooks, an ER doctor played by Felicity Jones. (Following Da Vinci Code’s Audrey Tautou and Angels & Demons’ Ayelet Zurer, Jones is this series’ third petite-European-brunette sidekick in a row. Clearly, Langdon has a type.) And in between Langdon and Brooks running and staring at maps and then running some more, there are all manner of inscrutable figures and puzzles to contend with, including sketchy individuals enacted by Irrfan Khan, Omar Sy, and Sidse Babett Knudsen, and security-camera footage of Langdon stealing the famed Dante Death Mask from the Palazzo Vecchio in Florence. So many people! So much intrigue! So little sense! I am wholly grateful to Howard for eschewing the funereal pacing and, for the most part, heavy-handed portentousness of his previous Dan Brown outings, and screenwriter David Koepp is to be commended for gracing this notoriously dour franchise with moments of charming deadpan comedy. (Most of them arrive courtesy of the marvelous Khan, who scores a deserved laugh in his gentle dropping of this PG-13 release’s token F-bomb.) But the speedy tempo and blitheness come with a price, because Inferno, in its narrative haste, consistently scoots on to increasingly convoluted matters before we’ve had time to properly register the previous convoluted matters. How, exactly, do Langdon and Brooks keep escaping their seemingly inescapable circumstances? (In one scene set in a train car, they’re apparently saved by the editing; the pair tussles with bad guys while the locomotive is in motion, and when they disembark seconds later, the train has miraculously come to a full stop.) Why do nefarious forces go to such obscene lengths in creating artwork-desecrating mysteries – such as shuffling the order of Dante’s rings of Hell on that Botticelli – when nothing much comes of the discoveries? What’s with Brooks’ ridiculously convenient über-knowledge? (When Langdon pulls out a vial that he says is made of ivory, Brooks quickly corrects him, saying that it’s actually human bone. How, simply by looking at it, does she know it’s human?)

There are plenty of entertainments that can be recommended, if somewhat guiltily, with that old saw “Turn your brain off and enjoy.” And while that may be the only way to truly enjoy Inferno, it’s not an entirely meritless one, because Heaven knows the movie keeps giving you exquisite things to look at. The aforementioned Palazzo Vecchio, with its stunning frescoes and staggeringly high ceilings, is showcased with such richness and vibrancy that it’s practically a supporting character, and cinematographer Salvatore Totino brings a similar lushness to numerous sequences set in Venice – principally those at St. Mark’s Basilica – and Istanbul. (Fun though the film’s built-in travelogue is, I also found it a tad exhausting, and when Brooks asked Langdon if they were in the wrong city and he replied, “We’re in the wrong country,” I may have audibly groaned knowing yet another road trip was in store.) Plus, despite the goofiness reaching an inevitable boiling point, a lot of flaws are happily made up for in Inferno’s legitimately exciting climax, one that has the impressive nerve to involve a planet-threatening plague, a handful of gunmen, an underground summer-solstice concert performed on floating daises, and a perfect plan thwarted by – wouldn’t ya know it? – bad cell reception. Now there’s a Hell that even Dante didn’t foresee. KEEPING UP WITH THE JONESES

A busier-than-usual schedule kept me from catching the opening-weekend release of Keeping Up with the Joneses, a low-wattage slapstick in which bored suburbanites Zach Galifianakis and Isla Fisher are simultaneously horrified and tickled to discover that new neighbors Jon Hamm and Gal Gadot are gun-toting spies. Given this formulaic screen sitcom’s meager box office and general blah-ness, there’s probably little point now in saying that it’s not really worth your dough; director Greg Mottola’s latest likely won’t be around long enough to actively ignore. But if, down the road, you’ve got 100 minutes to kill and find the movie streaming or playing in the wee hours on TBS, you could certainly do worse than to give it a look.

Barring the late-film arrival of the master criminal Scorpion – a delightful casting coup I’m glad wasn’t spoiled for me in advance – there aren’t many surprises in screenwriter Michael LeSieur’s halfhearted amalgam of Mr. & Mrs. Smith, Manhattan Murder Mystery, and Date Night. The largely clunky staging, meanwhile, suggests that Mottola may have momentarily misplaced the considerable finesse he brought to Superbad and Adventureland. But while only Galifianakis qualifies as a natural comedian, all four leads are winning and funny, and the quartet’s alternately friendly and spiky rapport makes the film a totally easy sit. Although Galifianakis doesn’t have as many inspired bits as he did in the recent (almost too recent) Masterminds, he’s adorably ingratiating opposite Fisher, both of whom throw themselves into their physical schtick with cheerful abandon. Hamm, pricelessly suave here, delivers expert double takes in miniature, his eyebrows expressing a continual “What the … ?!” that his soothing readings don’t. And rather unexpectedly, Gadot completely holds her own against her more comically practiced scene partners, and is so assured and confident and beautiful that the performer’s Wonder Woman outfit is starting to feel a little superfluous. I smiled a lot during Keeping Up with the Joneses, but it was actually Gadot who really made me laugh, given how few performers on the planet could adequately do justice to the line “I may not need to moisturize, but I still have feelings.”