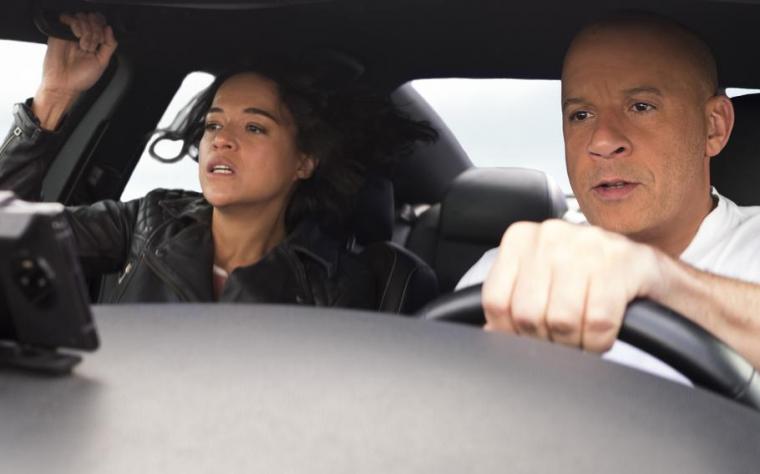 Michelle Rodriguez and Vin Diesel in F9: The Fast Saga

The ninth installment in the Fast & the Furious series and, thanks to 2019's unfortunate and awkwardly titled Fast & Furious Presents: Hobbs & Shaw, the tenth in the franchise, director Justin Lin's F9: The Fast Saga opens like Days of Thunder, middles like James Bond, and closes like a Corona commercial. In between those mile markers, the movie also manages to suggest a lost Indiana Jones sequel, a live-action Road Runner cartoon, a week-ending episode of Days of Our Lives, and a biggest-bicep competition in which the only entrants are Vin Diesel and John Cena. (Sorry, Vinnie, but Cena gets the prize.) Needless to say, I ate it all up with a spoon.

Or perhaps that does need to be said? Because our Moline cineplex, over the last two months, had been building anticipation for F9 with Friday-night screenings of every previous F&F outing, and because I compose capsule reviews for the Reader's Now Playing page, I've been obligated to return to my original critiques of those films in a weekly hunt for pithy comments. I may not have found much pith, but at least there was brevity, as most of my reviews of the series' sequels were one paragraph long and essentially boiled down to rewordings of the phrase “It's big and loud and dumb.”

The F&Fs are still big and loud and dumb. The difference, now, is that I can't seem to write about them enough. I'm not certain if the films' overall quality has improved (possibly) or if my standards have been systematically lowered (probably). But ever since 2015's Furious 7, I've been having a blast at these things; the instant they stopped taking themselves seriously, I giddily jumped aboard for the ride. And F9, while not quite the over-the-top classic that its 2017 forebear The Fate of the Furious was, is a profoundly silly, deeply enjoyable ride – a work so joyfully ridiculous that when it was suggested that two characters drive their souped-up car into outer space, and then they did, the moment felt as inevitable and satisfying as the climax of Oedipus Rex.

Per the wording at SimpleMost.com, the F9 key on your computer keyboard “has no essential Windows function.” The italicized F9 has no essential franchise function. While there's a whole lot of plot, none of it is terribly meaningful, and despite the almost literal resurrection of a significant F&F figure from the past, the emotional stakes here feel pretty low for a series in which – as we're reminded every five freaking seconds – the most important thing is family. Yet barring an uncharacteristically dull midsection and a flashback narrative that keeps grinding the momentum to a sentimental halt, Lin's continuation is still a considerable kick. 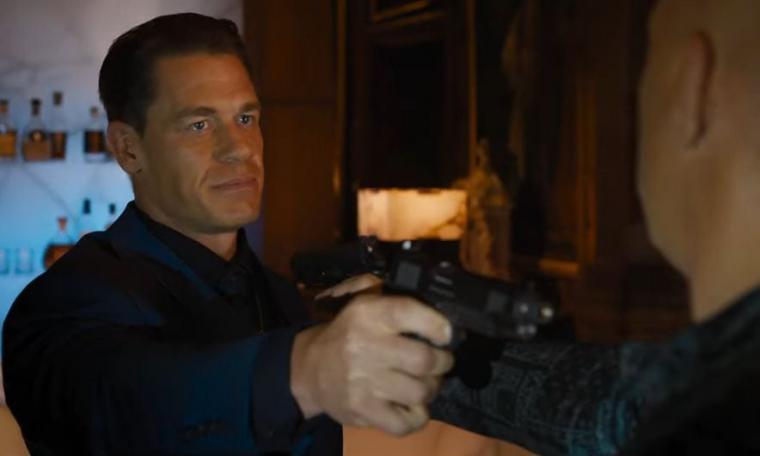 There's an easily digestible, world-saving storyline that requires our heroes and their antagonists to seek out two halves of a mighty orb and the key to ignite it; it's like the Avengers hunting for Infinity Stones while their costumes are in the wash. There's an uncomfortable reunion between Diesel's Dom Toretto and his estranged brother Jakob, the latter of whom Cena plays with his amusingly elastic features at maximum tautness. There's a new lunatic on the premises in the form of Thue Ersted Rasmussen's mini-Nazi Otto, and a returning one in Charlize Theron's cyber-terrorist Cipher, who spends most of her screen time in a glass-encased Hannibal Lecter cell wearing red-leather pants that appear to have been drawn on with magic marker. (The deliciously evil Theron pulls off the movie's funniest line when comparing Otto to Yoda, not because he's a Jedi master, but rather “a puppet with someone's hand up his ass.”) There are further comedic monkeyshines for Tyrese Gibson, Chris “Ludacris” Bridges, and Nathalie Emmanuel; more salt-of-the-earth decency and butt-kicking for Michelle Rodriguez and Jordana Brewster; added paychecks for Kurt Russell, Shea Whigham, and Helen Mirren. (Diesel is typically glum-looking in his latest take on Dom, but the dude grins like mad when in the presence of the great Dame. He also perks up during Cardi B's cameo. Don't ask why the rap star is there; I'm still not sure.)

Plus, there are stunts. Good lord are there stunts. As he's essentially become the audience surrogate for this franchise, Gibson is given a scene in which he rehashes the most insanely ludicrous (not to be confused with Ludacris) feats of derring-do that Team Dom has pulled off in recent F&F offerings, wrapping up with the reminder that, last time around, our heroes successfully evaded and took out a nuclear submarine. Child's play. In F9, one vehicle drives upward on a collapsing bridge, another vehicle Tarzan-swings on a makeshift vine, a spy zip-lines his way between Edinburgh rooftops like a malevolent Spider-Man, an armored truck slowly crashes toward a land mine, and an 18-wheeler performs a somersault – and that's not even mentioning the rocket-car that nearly outpaces a jet. It doesn't, but that barely matters, because the car's creators (one of whom is Tokyo Drift charmer Lucas Black) are simply happy and relieved that the thing didn't blow up. Then the thing blows up.

Barring Theron's Star Wars punchline, I don't think I laughed out loud at any of the dialogue in F9, and a lot of it is actually meant to be funny. I frequently roared at the stuntwork, though. Has any film franchise ever had this much fun blatantly disregarding the laws of physics? I didn't exactly believe in the gravity-defying effects, much like I don't believe it when this series' regulars are “killed” or when Vin Diesel is asked to play an emotion. Yet I absolutely bought the budget-annihilating goofiness of F9: The Fast Saga, especially when Lin and company introduced a super-powerful electromagnet to the mix, one that causes so much damage to downtown traffic that Tyrese Gibson might have wondered whether he had fallen asleep on set and woken up in one of his Transformers flicks. Leave it to the F&F series to send a car hurtling through space and still find its most exhilarating innovation in an object that's stuck to everyone's fridge.