Demon Cedes: “The Conjuring: The Devil Made Me Do It” and “Spirit Untamed” 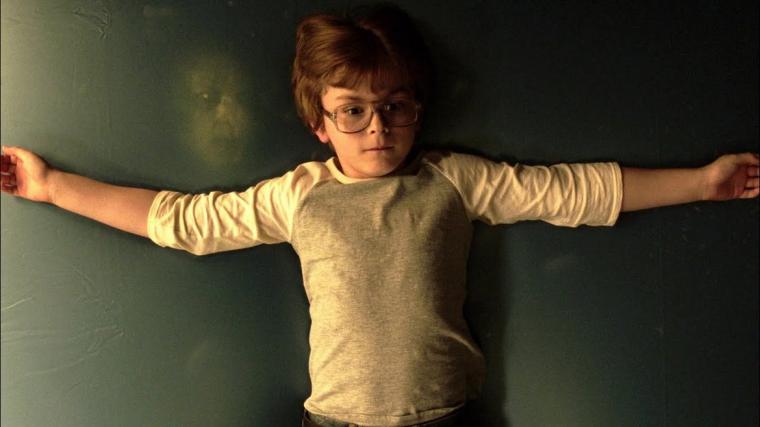 Julian Hilliard in The Conjuring: The Devil Made Me Do It

THE CONJURING: THE DEVIL MADE ME DO IT

There are two absolutely excellent moments in the new horror film The Conjuring: The Devil Made Me Do It. In one, eight-year-old David Glatzel (Julian Hilliard) plops onto the inky blackness of a water bed – the movie is set in 1981, in case you feared those things were making a comeback – and as he contentedly sways atop the undulating waves, the face of a demon, seen in an overhead shot, appears from within the bed right before the bed itself turns into a geyser. In the other outstanding bit, that same traumatized boy, having been possessed by that same demon, is suffering through a violent exorcism when his body suddenly snaps and contorts, twisting itself into hideous knots as David's pained shrieks are replaced by drooling cackles. Both moments are scary as all get out; both boast images that even this longtime genre fan had never seen before; Hilliard appears to be a remarkable young actor. If director Michael Chaves' fright flick were actually about poor David and his supernatural turmoil, this second sequel might've really been something.

Unfortunately, though, it's about something else … or rather, a bunch of something elses. The central narrative – or at least the one that gives the film its subtitle – concerns the real-life 1981 killing of landlord Alan Bono by his tenant Arne Cheyenne Johnson, the latter a young man whose lawyer notoriously blamed demonic possession for the crime. (As both the court case and Chaves' movie claim, the entity that possessed David Glatzel evacuated the child's body and immediately jumped into Arne's.) Not to minimize Bono's death, but that sounded like a pretty fun setup for this eighth installment in what I suppose we have to call the Conjuring Universe: The Trial of the Chicago 7 by way of The Exorcist.

Incredibly, however, Johnson's murder trial accounts for maybe a minute-and-a-half of screen time, and even Arne (touchingly played by Ruairi O'Connor) and his interior battles with a/the devil have to fight for prominence. There's the nasty stuff involving David to consider – both in prelude and flashback form – as well as major detours featuring a slender, creepy occultist (Eugenie Bondurant) and her retired-priest father (John Noble). An unnecessary subplot about a pair of teenage besties who meet terrible fates is thrown into the mix, along with much chatter about the era's rise in Satanic cults, plus a series of psychic visions that alternately expand and impede the momentum. And, of course, there are side narratives involving series heroes and real-life paranormal investigators Ed and Lorraine Warren (Patrick Wilson and Vera Farmiga), who might be the flat-out-nicest protagonists ever to grace a horror franchise. I don't mean that as a compliment. 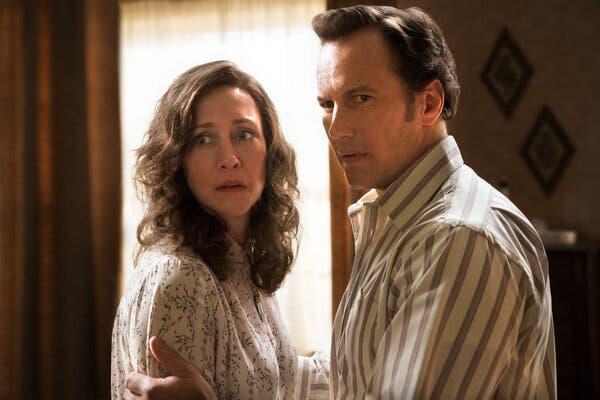 It's nearly always wonderful whenever Farmiga takes on a screen role, and the occasional Aquaman aside, generally pleasant whenever Wilson does. But although the skilled performers are clearly comfortable with their characters and one another, effortlessly convincing you of the Warrens' decades-long relationship, this selfless, devout, unwaveringly devoted couple is a fundamentally dull pair – Lorraine in her ruffled, high-collared blouses and Ed in business-casual menswear from a mid-'70s JCPenney catalog. Wilson and Farmiga are likability incarnate in the Conjurings, but neither can do much to energize the drama. And even when Ed, under a demonic spell, begins chasing Lorraine with a sledgehammer in slavering Nicholson-in-The-Shining mode, there's no reason to feel anxious, because there's never any doubt that Their Love Will See Them Through. Good for them, I suppose, but you know … . Yawn.

Still, The Conjuring: The Devil Made Me Do It isn't bad as second sequels (especially horror sequels) go, and it's a pleasure to report that despite being overly generous in terms of plot, the film clocks in a good half-hour shorter than its far-lamer immediate predecessor. Michael Burgess' richly textured cinematography is striking, as is the crisp editing, and Chaves' outing continues the franchise's amusing tradition of employing well-worn pop hits as signifiers of terror; this time, it's Blondie's “Call Me” that's meant to give us goosebumps. There's an admirably unnerving scene in which Lorraine chases, and is chased by, her doppelgänger through a shadowy catacomb, as well as the jolt of an out-of-focus figure glaring at Arne from a second-floor window. And even though they almost can't help but somewhat flatten the experience, I did smile at a few of Ed's and Lorraine's lighter bits, particularly when Ed, recovering from a heart attack, insists that Lorraine not investigate a spooky cellar because, and I quote, “You'll get your dress dirty.” Given that she's the one with psychic abilities and the one doing most of the legwork here, Lorraine's response is priceless: She grins and tells her husband, “Just hold my purse.” He does. Ed may not be all that interesting in these movies, but he's definitely wise. 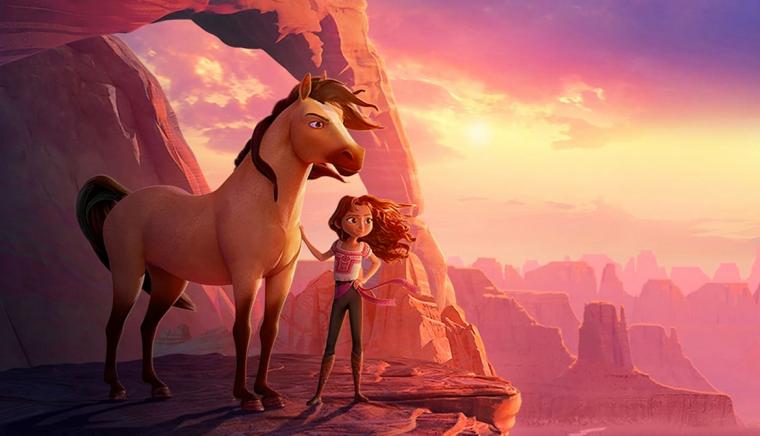 Computer animation in family entertainment has become so sharp and sophisticated that, even as a childless adult, you can usually take pleasure in a film's visuals even if you find its story and characters tiresome. That's what made DreamWorks Animations' Spirit Untamed such a disappointment for this particular childless adult. Not only was the narrative boring and the human and animal personae forgettable, but the movie didn't even look that good.

Occasionally, this comedic frontier melodrama throws us a bone with the warm glow of a sunset or the red, pink, and purple hues of a canyon at magic hour; director Elaine Bogan's debut feature is decent enough when it's merely resembling a Hallmark sympathy card. Yet there's so little precision and detail in the animation – so much apparent corner-cutting in the manner of innumerable kids'-TV shows – that I couldn't understand how this thing merited a big-screen release. (It came as no surprise when I learned that, in addition to DreamWorks' 2002 predecessor Spirit: Stallion of the Cimarron, the film is based on a Netflix series, Spirit Riding Free, that I had been blissfully unaware of.) Our heroic tween girls look like Disney-fied Margaret Keane paintings, all big pleading eyes with minimal changes in expression. When protagonist Lucky's mashed potatoes land on her aunt, they drop off the woman's face in three ill-defined clumps. The vast expanse of heavenly land and sky that the wild horses yearn for is reminiscent of a not-especially-challenging paint-by-number. Over and over, I was pulled out of the experience simply because I couldn't believe how visually bland it was. Is it just me, I thought at one point, or does the titular mustang look like a four-legged Twinkie? 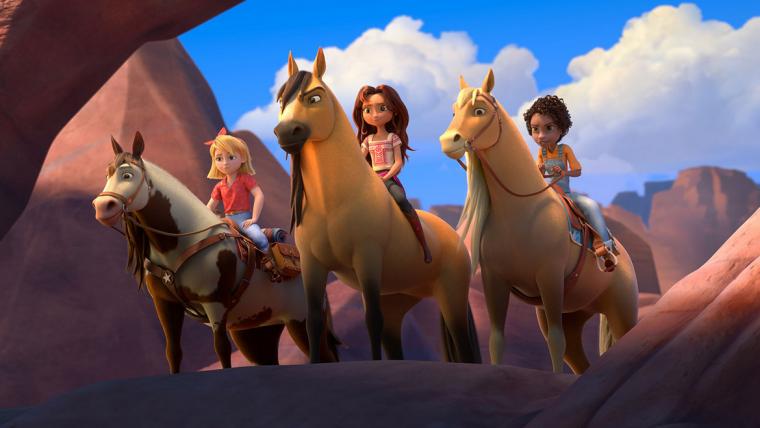 Production on Bogan's outing was evidently completed remotely by its team of self-quarantined artists, and that might partly account for the lack of luster. Unfortunately, though, Spirit Untamed feels exactly like what you'd get if an under-motivated crew was forced to collaborate via Zoom meeting; Webster's could use virtually any image here to accompany the dictionary definition of “generic.” Then again, it's all generic. The vocals of motherless horse lover Lucky (Isabela Merced) and her Wild West BFFs (Marsai Martin and Mckenna Grace) are suitably plucky but barely individualized. Adult voice actors Julianne Moore, Andre Braugher, Walton Goggins, and Jake Gyllenhaal – a truly impressive assemblage of talent there – sound like they're still waiting for character direction they never received (although it's always a pleasure to hear Gyllenhaal sing, which he finally does in the movie's last minutes). The slapstick is graceless and cheap, with the opening destruction of a mansion hall instigated by a squirrel blowing Lucky a raspberry. Lucky's taming of the wild yellow stallion is accomplished almost solely through the tossing of a few apples. The clownishly “threatening” horse thieves deserve those quotation marks. The soundtrack's occasional ballads are beyond banal. The animals' anthropomorphism is as prevalent and expected as the humans' anachronisms. (Our feisty 19th-century gal pals make each other friendship bracelets and word-drop “totally” into way too many sentences.) None of this seemed to bother the youths at my screening, and I was certainly happy to hear the sound of kids laughing at the cineplex in a way they absolutely didn't during Disney's Cruella. But whether they know it or not, those children deserve better than Spirit Untamed, which feels so much like a rough draft for a feature film that it should've been titled Spirit Unfinished.