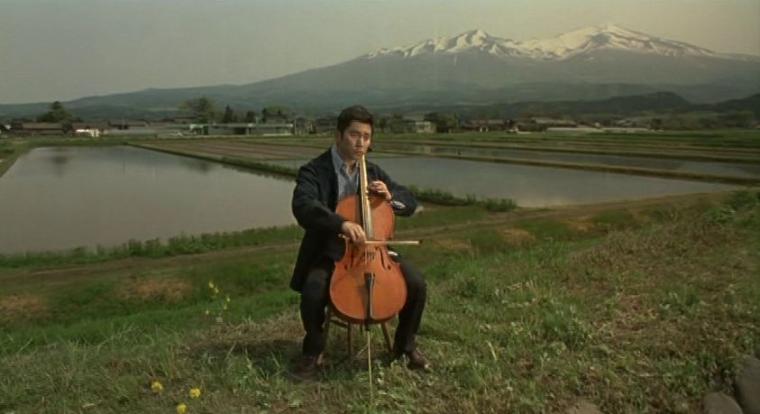 Masahiro Motoki in "Departures" at the Figge Art Museum -- September 29.

With the latest collection of titles in the Figge Art Museum's Film at the Figge series, the Davenport venue will be screening international, award-winning works that deal with death, loss, and grief in unexpected ways, beginning with its September 29 showing of Departures, the acclaimed Japanese drama from 2008 that won the Academy Award for Best Foreign Language Film.

Directed by Yōjirō Takita and starring Masahiro Motoki, Ryōko Hirosue, and Tsutomu Yamazaki., Departures follows a young man who returns to his hometown after a failed career as a cellist and stumbles across work as a nōkanshi – a traditional Japanese ritual mortician. He is subjected to prejudice from those around him, including from his wife, because of strong social taboos against people who deal with death, and works to repair these interpersonal connections through the beauty and dignity of his work. The idea for Departures arose after Motoki, affected by having seen a funeral ceremony along the Ganges when travelling in India, read widely on the subject of death and came across author Shinmon Aoki's Coffinman: The Journal of a Buddhist Mortician. He felt that the story would adapt well to film, and Departures was finished a decade later.

Because of Japanese prejudices against those who handle the dead, distributors were reluctant to release the film – until Takita's drama earned a surprise Grand Prize win at the Montreal World Film Festival in August of 2008. The following month, the film opened in Japan, where it went on to win the Academy Prize for Picture of the Year and become the year's highest-grossing domestic film. This success was topped in 2009, when it became the first Japanese production to win the Academy Award for Best Foreign Language Film.

Upon its U.S. release, Departures received positive reviews, with aggregator Rotten Tomatoes indicating an 80-percent approval rating and Claudia Puig of USA Today describing the film as a "beautifully composed" work that was also "emotional, poignant" and "profoundly affecting." Reviewers highlighted a variety of themes, but focused mainly on the humanity that death brings to the surface and how it strengthens family bonds. Meanwhile, the box-office success of Departures in Japan led to the establishment of tourist attractions at sites connected to the film and increased interest in encoffining ceremonies, as well as adaptation of the story for various media, including manga and a stage play.

Departures will be presented in the John Deere Auditorium on September 29, admission to the 6:30 p.m. screening is free, and more information on the Film at the Figge series is available by calling (563)326-7804 and visiting FiggeArtMuseum.org.