Devils in America: “The Forever Purge,” “The Boss Baby: Family Business,” and “Zola” 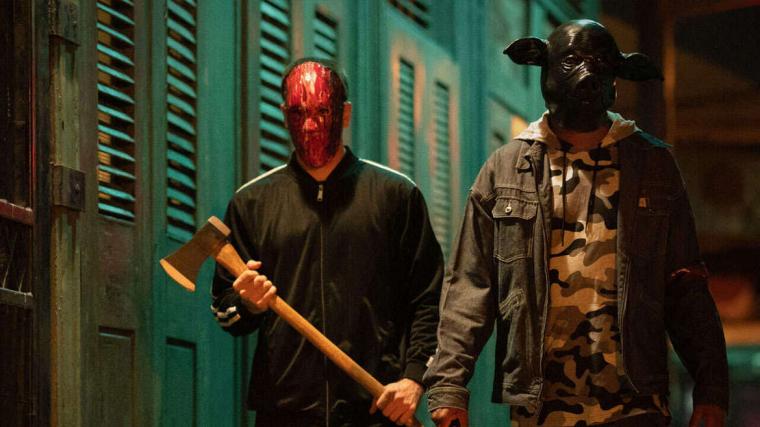 Directed by Everardo Gout and written, as all of them have been, by James DeMonaco, The Forever Purge is the fifth and purportedly final (sure, whatever) installment in the popular series of horror thrillers, and offhand, it's hard to think of another long-running film franchise that has gotten more mileage out of being not bad. Dating back to 2013's original, none of the Purge movies are great, yet none are outright terrible, either, and all of them have ideas, even if their (pun-intended) execution has generally been on the iffy side. While you may never leave one of these things totally satisfied, you're at least rarely disappointed, and Gout's entry/finale might be the not-bad-iest not-quite-a-disappointment we've been given since all those masked murderers went after Ethan Hawke's entitled suburbanite eight long summers ago.

What a simpler time that was, huh? Given how increasingly political – or, if you'd rather, “political” – DeMonaco's series has become, it's hard to recall that, once upon a time, the chief targets of America's “12 hours of legalized mayhem” holiday were a white, well-to-do family of four whose most egregious collective sin was their embrace of capitalism. As the franchise has expanded, however, so has the Purgers' list of those marked for annihilation. The heavily armed psychopaths still hate the rich, of course, but they've gone on to target liberals (principally liberal politicians), and poor people, and black people, and brown people, and now, in The Forever Purge, the undocumented, embodied here by Ana de la Ruguera and Tenoch Huerta as a pair of married Mexicans who illegally cross into Texas to escape a drug cartel. Whether it would have been smarter for them to hide in Mexico rather than enter a country that gives machete-toting lunatics an annual Get Out of Jail Free card is open to debate.

The central conceit of Gout's sequel is that, after the 12 hours of bloody madness conclude, nationwide groups of “Ever After Purgers” refuse to let the party die, and plan to continue their reigns of terror indefinitely. That puts de la Ruguera's Adela and Huerta's Juan on the potential chopping block, along with ranch hand Juan's mildly bigoted boss Dylan (Josh Lucas), Dylan's pregnant wife Cassie (Cassidy Freeman), his sister Harper (Leven Rambin), their dad Caleb (Will Patton), and Juan's similarly undocumented friend T.T. (Alejandro Edda). As franchise-extending set-ups go, this isn't an altogether ungainly one. With the “rules” of the Purge effectively eradicated, there's a more disquieting “anything goes” vibe here than in the movie's four predecessors, and tensions run high not only between the attackers and the attacked, but amidst the attacked themselves – the unplanned Caucasian and Mexican allies who don't know whether they can trust each other, let alone anyone outside their circle. 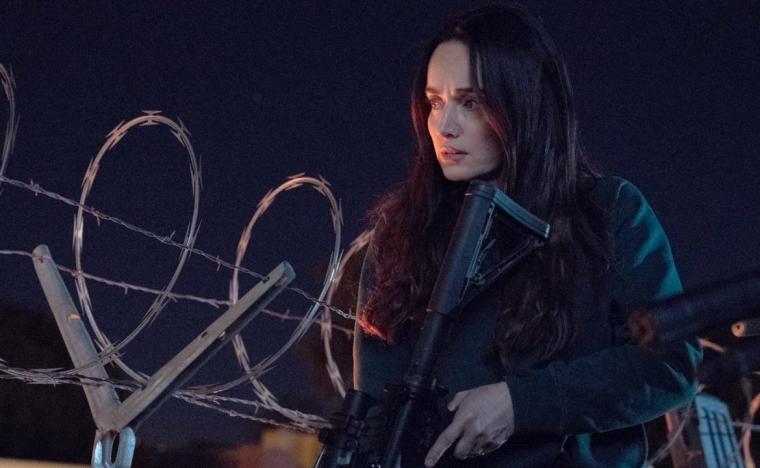 Oddly and unfortunately, though, getting rid of the series' previously established rules also limits the new film's scope. Without that 12-hour window of brutality, the Purgers simply become eternal sociopaths à la Michael Myers or Jason Voorhees – unkillable monsters to be evaded or executed until the end of time. There's a bit of a “beat the clock” angle introduced when we learn that our heroes only have six hours to reach the safety of the Mexican border, yet even that attempt to up the ante doesn't help much, and the irony of the movie opening with Mexicans attempting to cross into America and closing with Americans attempting to cross into Mexico feels more like a grad-school thesis statement than an organic result of the narrative.

Still, that statement is pretty clever, if self-consciously so, and despite this latest Purge growing as repetitive as all of them do, there's an awful lot to like here. Five outings in, hearing that shrill warning siren and those televised, misleadingly banal “May God be with you all” sentiments can't help but produce happy shivers, and while the acts of violence aren't particularly novel, they also aren't pornographically unpleasant; you don't sense that Gout is shoving your face in the carnage. Plus, barring a couple of overscaled villainous portrayals, the performances are uniformly first-rate, with de la Ruguera and the traditionally underrated Lucas especially fine, and Patton so wonderfully in-character as a true oxymoron – a wealthy Texan landowner whose political leanings are entirely blue – that you just know he won't be around as much as you want him to be. Intense but rarely scary, smart but rarely insightful, formulaic but rarely boring, The Forever Purge is something of an oxymoron itself. It's also just decent enough, probably, to make me not resent this “final” installment when it inevitably proves not to be final at all. 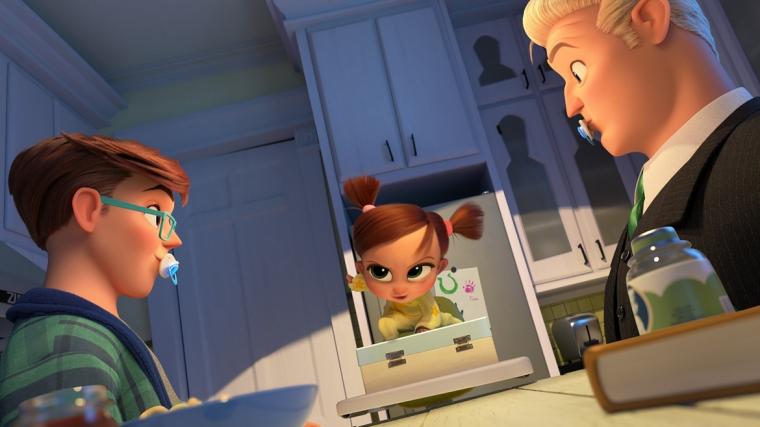 As I'm apparently one of few grown-ups who didn't instinctively roll their eyes at 2017's animated comedy The Boss Baby (well, there's me, and there are the adult members of the motion-picture academy who gave the film an unexpected Oscar nomination for Best Animated Feature), I was actually really looking forward to director Tom McGrath's pandemic-delayed sequel The Boss Baby: Family Business. I mean, come on: Secret-agent infants! A baby-sister tyrant voiced by Amy Sedaris! A nefarious nutjob voiced by Jeff Goldblum! Alec Baldwin again doing a miniature Trump in a diaper! What wouldn't I like?

Sadly, just about everything. Despite taking place more than 20 years after the events of the first movie, this followup wastes almost no time replicating the original's formula to the letter, with Baldwin's now-grown Ted and James Marsden's family man Tim magically reverted to their former childhood selves and forced to thwart the evil machinations of another global corporate empire. That wouldn't have been a deal-breaker if the jokes and slapstick were actually funny, but they're mostly not, and all of the sentiment that felt truly earned in the first film comes off as calculated and cynical here. Why are we being asked to watch siblings Ted and Tim learn to love and trust one another when they already did that four years ago? Family Business is strictly going-through-the-motions sequel-hood, the idea being “If they loved it before, they'll no doubt love it again,” and McGrath's offering squanders the promise that Sedaris and Goldblum bring to the proceedings; even their deliberately eccentric readings can't make up for the weak material they're stuck with.

Baldwin still comes through with some sneaky line deliveries, and I did laugh out loud at one totally unanticipated Lisa Kudrow wisecrack. But the only real reason to catch this latest Boss Baby – beyond the chance to enjoy some air conditioning alongside your hopefully more amused kids – is the return of Tim's wizardly alarm clock Wizzie, whom the director's nephew James McGrath again voices as a riotous Ian McKellen wannabe in Lord of the Rings mode. After his owner apologizes for forgetting to set the guy to daylight-savings time, the brittle, newly one-armed clock bellows, “Daylight cannot be saved, Tim!!!”, and were I enjoying a beverage when he said that, I would've involuntarily spit half of it onto the auditorium floor. No more Boss Babys, please. But bring on a Wizzie the Pooh-Pooher offshoot as soon as humanly possible. 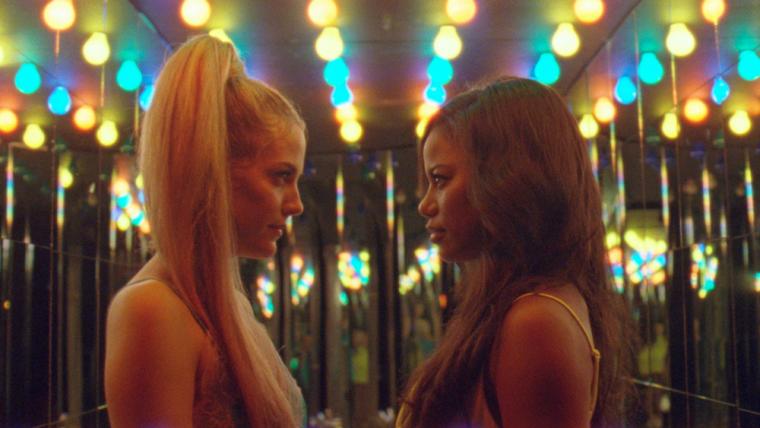 It's been such a treat, and such a relief, to see summer-movie season again in full swing at our local cineplexes that, until now, I haven't once thought to whine about the fact that eight of the titles released since Memorial Day weekend have been sequels. (And that doesn't count Cruella, which definitely feels sequel-adjacent.) But, for a few more days at least, there is one wholly original film out there – so long as your definition of “original” doesn't exclude a work adapted from a series of tweets.

Those with sturdier recollection of the Twitterverse than I might remember that, in the fall of 2015, Detroit-based waitress and exotic dancer Aziah “Zola” King posted 148 tweets on her road trip from Hell: an out-of-the-blue trek to Tampa made with a new acquaintance and fellow stripper that quickly degenerated into an almost literal orgy of proposed (and accomplished) sex work, alcohol, drugs, murder, and a botched suicide attempt. King's one-sided social-media conversation went viral, possibly because the “Can you believe this?!” nature of her tweets already felt like a movie. And now it is a movie, with Taylour Paige as Zola, Riley Keough as her untrustworthy new frenemy Stefani, and the indispensable Colman Domingo as “X,” Stefani's unnamed roommate and pimp who boasts a feral temper and a heavy African dialect that only comes out when he's really pissed. From what I've gleaned, the plotting is just like the tweets. Writer/director Janicza Bravo's movie, however, is like nothing I've previously seen – or at least nothing I've seen since Harmony Korine's 2013 cult staple Spring Breakers, except with far more frontal male nudity and far less (i.e. zero) James Franco. Consider yourselves advised. Hopefully intrigued, too. 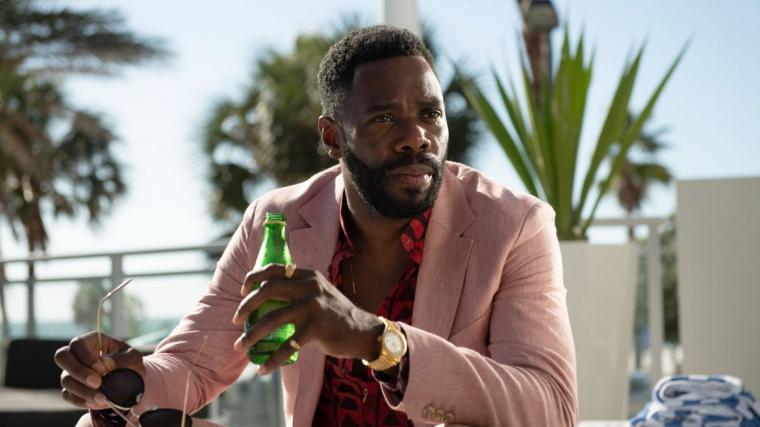 Tonally, Zola is all over the map, and that feels right for a film in which even its protagonist can't determine whether she's trapped in a sick comedy, a pathetic tragedy, or a slow-burn horror show. Bravo's camera, though, captures the woozy beauty of all of it: the lingering dread of a Confederate flag flying at half-mast; the tacky, security-camera vastness of a Tampa liquor store; the amusingly percussive repetitiveness of two young motel guests bouncing a basketball. The director and her co-screenwriter Jeremy O. Harris (author of the currently Tony-nominated Slave Play) view Zola's alternately hilarious and harrowing weekend trek in all its gaudiness and threat yet never judge anything, or anyone; their movie is remarkably open-minded and the complete opposite of moralistic.

It's also, quite often, fantastically clever. There are off-screen Twitter whistles and sharply satirical montages and frequent implosions of the fourth wall, with Stefani, in one outrageous moment, demanding that the movie start over with her as the heroine … and it does. (It's only July, yet I doubt we'll see a riskier or more strangely, brashly hypnotic film performance this year than Keough's, given Stefani's hysterical yet absolutely up-front appropriation of “urban” slang and no-shits-left-to-give acceptance.) There are also narrative detours that lead nowhere, and more than a few sequences in which the film seems determined to crawl up its own ass, and although he doesn't do anything wrong, necessarily, Nicholas Braun – that adorable dipstick Cousin Greg from HBO's Succession – might almost be too Cousin Greg-y for his purposes here. Yet I'm not sure I ever even blinked at the gorgeous weirdness of Zola, a daydream that turns into a nightmare that turns into a hangover – but, blessedly, a hangover for its characters, not its audience. For us, the experience is more like the ultimate contact high.