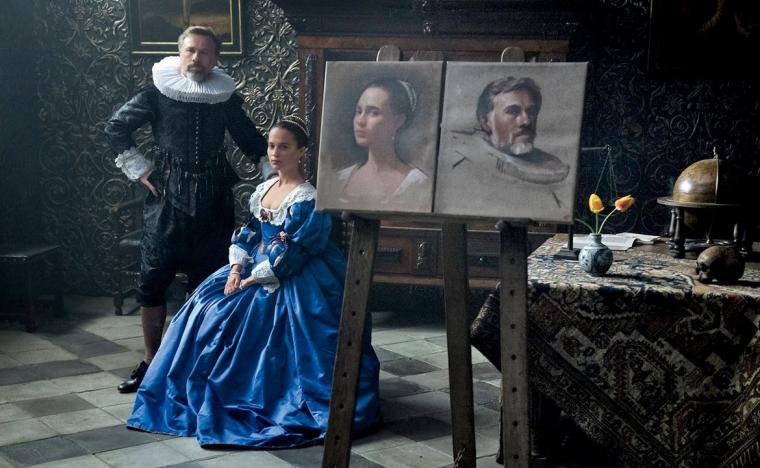 For many years now, it's been obvious that Hollywood has all but thrown in the towel regarding its scheduling of new releases on Labor Day weekend, although the “why” behind that continues to confound me. (It's not like people aren't still going to the movies; seven of this past weekend's 10 top-grossing titles actually gained audiences from the previous weekend, and the biggest attendance dip was for The Emoji Movie, which saw a box-office drop of a whopping 3.3 percent.)

But 2017's Labor Day weekend might be the new standard-bearer in the annals of cinematic renunciation, because here were our only new – or rather, “new” – cineplex options: the 40th-anniversary release of Spielberg's Close Encounters of the Third Kind (a magnificent work, to be sure, but a 1977 one); Marvel's Inhumans (the pilot for a TV series); and Tulip Fever, a period drama shot in the summer of 2014 originally scheduled for release in November of 2015. Since then, the latter title – one boasting a quartet of Oscars winners in Alicia Vikander, Christoph Waltz, Judi Dench, and co-screenwriter Tom Stoppard – has had its release postponed an additional four times before being blithely tossed at the masses on Hollywood's least-favorite weekend of the year. You'd actually feel terrible for director Justin Chadwick's abused outing if the movie itself weren't quite so stupid.

Set in 17th Century Amsterdam, Tulip Fever casts Vikander as the orphaned Sofia, a girl sold into marriage with Waltz's “peppercorn king” Cornelis Sandvoort. (As if his name weren't enough, the character's odiousness is further telegraphed by our hearing him piss before we hear him speak.) After three years of an unhappy union in which she's unable to produce an heir, Sofia's sexual desire is finally sparked with the arrival of Dane DeHaan's Jan Van Loos, a struggling artist who's commissioned to paint a portrait of the Sandvoorts, and who falls for Sofia in turn. Upon consummating their subtle flirtation, the lovers plan to run off together after making a quick fortune in Amsterdam's mid-century tulip craze, with the most prized bulbs selling for hundreds of pounds each. But their scheme is imperiled when the affair is discovered by Sofia's housemaid Maria (Holliday Grainger), who threatens to tell Cornelis of Sofia's adultery even though – newly pregnant and unmarried – she's already in danger of losing her job. Sofia, though, has an idea: If the maid stays silent, Sofia will pretend that she's the one who's pregnant, Maria can stay employed, and after the child is born and Sofia makes her escape, the baby can be raised by Cornelis and Maria in the luxury of the Sandvoort home.

It's my duty, at this point, to remind you that Tulip Fever is not a comedy. Not even when the plot is hurled into motion by a bit of mistaken identity straight out of Three's Company. Not even when Maria goes into labor and Sofia is forced into enacting the labor pains. Not even when Dench shows up as a pipe-smoking nun. 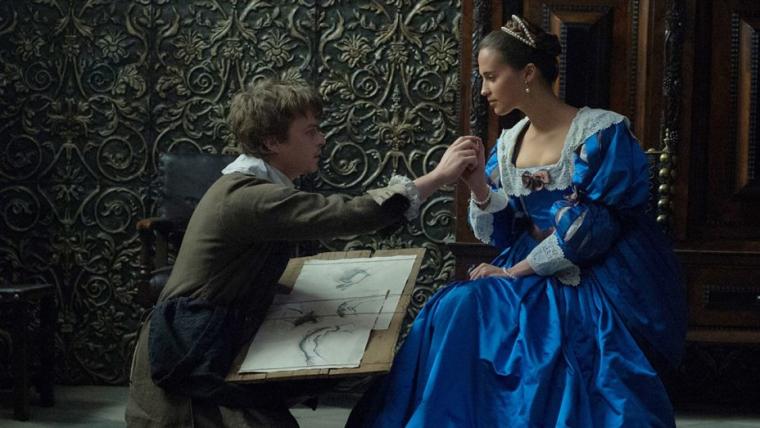 A nagging question remains, though: Why isn't this a comedy? Surely the material – adapted from co-screenwriter Deborah Moggach's 1999 novel – could have supported such an interpretation, and Stoppard clearly showed a talent for mid-millennium European silliness in his script for Shakespeare in Love. (Hell, Judi Dench is already around to help stoke those SiL memories.) Yet even when events here seem to scream for slapstick treatment, as in that childbirth sequence or the scenes with Tom Hollander's lascivious doctor, an inappropriate earnestness hovers over the proceedings; you frequently want to laugh, but the film's moribund dialogue and incessant heaviness of spirit won't let you. As for Sofia's sitcom situations, they're treated with an unbecoming anguish that's echoed in Vikander's tremulous, wet-eyed portrayal. As guided by Chadwick, the performer plays her every nutty scenario like it's the height of romantic tragedy, and DeHaan, when not being dully sincere, is so similarly tortured that there isn't an ounce of pleasure to be had with this chemistry-deprived duo. For Heaven's sake, it's a movie about a national obsession with tulips. Couldn't Chadwick, or the screenwriters, or the leads, or someone involved in the filming have seen this for the historically accurate goofiness it is, and acted accordingly?

The period design and costuming feel unerringly right, and thankfully, the narrative is too actively insane to be actively boring. Grainger, meanwhile, adds some spark in the film's first half, and she and a nearly unrecognizable Jack O'Connell provide some romantic playfulness before the ludicrous plotting unceremoniously ships the guy off to sea. But Chadwick's drama-in-name-only still emerges as little more than a collection of colossally missed opportunities, with Waltz stuck in an unplayable role as a foppish cuckold and Zach Galifianakis – again, not a comedy, folks – left stranded as Jan's dimwitted, drunken ally. Previous Labor Day weekends have certainly delivered weaker debuts that this one, most memorably 2014's preening holiday turkey The Identical, which imagined a world in which Elvis Presley's stillborn twin had actually survived. That one was nearly legendary in its awfulness. I'm not sure, however, that Tulip Fever's 105-minute “meh” is in any significant way an improvement.