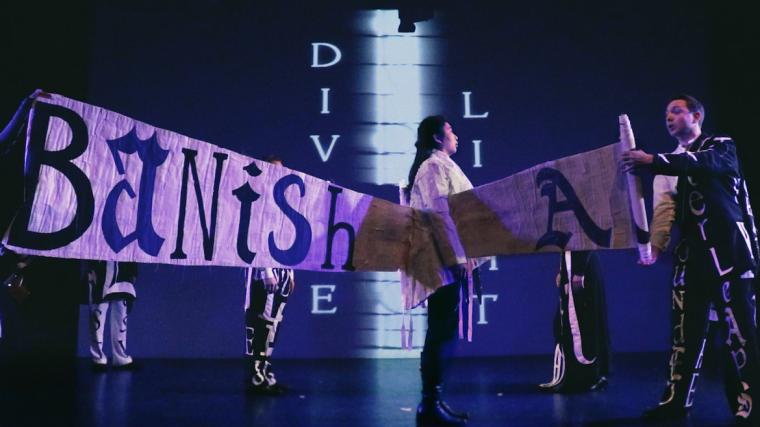 Divide Light examines the nature of emotion and story telling in contemporary society through the lens of Dickinson’s 19th-century philosophical poetics. The opera challenges and expands the traditional genre format through its sparser and more closely developed presentation, and features eight operatic voices plus a string quintet. Its striking visual elements feature large projections on a back screen of images combining Lesley Dill’s edgy and evocative black-and-white photographs with text from Dickinson’s poetry. Poems stream, scroll, flash, twirl, pop out, edge in, seep out, fade in, fall down, and rise up on the screen, while the performers sing Dickinson’s words and wear them scrawled across their costumes.

Dill, whose currently exhibition Wilderness: Light Sizzles Around Me is on display at the Figge through August 22, is one of the most prominent American artists working at the intersection of language and fine art. Her elegant sculptures, art installations, mixed-media photographs, and evocative performances draw from both her travels abroad and profound interests in spirituality and the world’s faith traditions. Exploring the power of words to cloak and reveal the psyche, Dill invests new meaning in the human form. Intellectually and aesthetical engaging, the core of her work emerges from an essential, visionary awareness of the world.

Divide Light composer Richard Marriott has composed extensively for film, dance, opera, video games, and concert stages. His recent produced compositions have included the operas Voyage and Passion of Leyla, the dance score Invitation, and the concert works Metropolis Concerto for Violin and Wind Ensemble, and Klezmorim Concerto for Contrabass and Orchestra. His Ghost Ship Concerto for Cello and Orchestra was recently premiered by the Oakland Symphony, and Marriott is also the founder and artistic director of Club Foot Orchestra.

Drawn to stories of individuals in the face of adversity, filmmaker Ed Robbins has traveled extensively across America and internationally to countries that include Afghanistan, Burma, Colombia, Iraq, India, Liberia, Nigeria, Pakistan and Rwanda, South Sudan and Syria. His topics have ranged from social justice, crime, front-line war, the environment, human rights, religion, science, to the performing and visual arts. Robbins has also written and produced numerous programs for television outlets that include PBS, the Discovery Channel, TLC, Nat Geo Channel, ABC, NBC, and, in the United Kingdom, BBC2 and Channel 4.

Divide Light will be presented in the Figge's John Deere Auditorium at 6:30 p.m. on August 19, and following the screening, Robbins will give a virtual talk on the filmmaking process, its technical aspects, and the moments of artistic inspiration behind the movie's creation. The program is also available virtually, with registrants receiving a Zoom link two hours prior to the start time, and more information on the free screening is available by calling (563)326-7804 and visiting FiggeArtMuseum.org.