Dom-in’ Nation: “The Fate of the Furious” 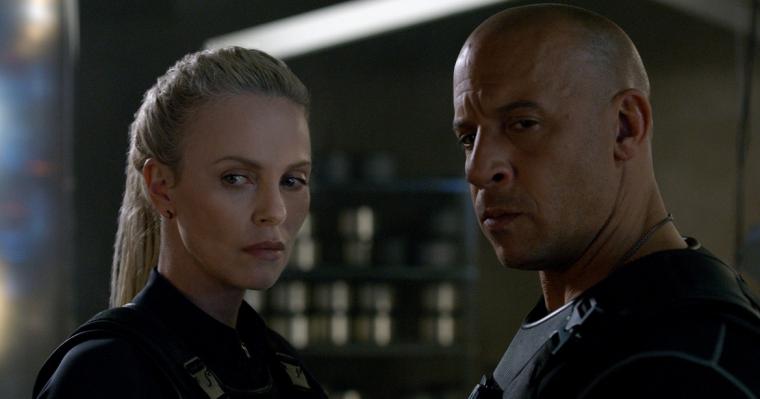 Charlize Theron and Vin Diesel in The Fate of the Furious

THE FATE OF THE FURIOUS

The eighth entry in the Fast & the Furious franchise opens with Vin Diesel’s sensitive bruiser Dominic Toretto winning a drag race in Havana by driving a souped-up beater car ... that’s on fire ... moving backwards. The movie climaxes with Dom and his crew evading heat-seeking missiles in Russia while simultaneously outrunning a nuclear submarine that’s barreling through the breached surface of frozen waters. I can only guess that this series’ ninth outing will begin with Dom and a sneering adversary playing chicken atop an airborne Goodyear Blimp with a bomb on its fin, and conclude with our hero plugging a hole in the International Space Station using only his wits and a half-empty Corona.

If you somehow missed the news, director F. Gary Gray’s The Fate of the Furious debuted on Friday, and having seen the film, I really only have one question: Why can’t most Bond movies be this awesome? Though it seems like several lifetimes ago, this franchise was initiated a few months pre-9/11 with scrappy, down-and-dirty races and chases on the streets of L.A. and nary a CGI effect in sight. Now it’s all showers of tumbling cars and wrecking balls the size of Pluto and über-villainous plots involving nuclear warheads ... and I couldn’t possibly be more grateful for the switch. Somewhat amazingly, the sillier and stupider these blockbusters get, the more enjoyment they yield. And by the time this new installment found Jason Statham shooting up a cargo plane of goons while toting around a baby-seated infant – a child he sweetly supplied with earmuffs (and “The Chipmunk Song”) to drown out the gunfire – I was so irrationally happy that I was practically applauding. Leave it to this endlessly morphing series to have its latest start like Spectre and end like Raising Arizona.

Early in the film, whose title I’ll just shorthand as F8, Dominic’s wife Letty (the invaluable Michelle Rodriguez) tells her hubby how much she adores his smile, and it is indeed a lovely sight; Diesel’s grin seems legitimately relaxed and genuine here the way it never does in his Riddick and xXx endeavors. That’s why it’s a bit unfortunate that F8’s narrative finds Dom blackmailed into betraying his spouse and friends – his oft-referenced “family” – so that Charlize Theron, in Rapunzel-length blond dreads, can assume control of the world’s nuclear arsenal. With Dom forced to steal heavily guarded launch codes and such, and his team trying to find the brick shit-house before he causes further damage, this storyline is perfectly sufficient (if not terribly exciting) genre nonsense. The problem is that it requires Diesel to spend a good 95 percent of his screen time not smiling, and a Dominic Toretto who isn’t having any fun doesn’t deliver much fun for an audience, either. It’s not that Diesel can’t act; let’s pause to remember that the guy’s breakout came as a member of Spielberg’s uniformly solid Saving Private Ryan ensemble. It’s that when you see him actively trying to act, his suffering is generally so suffocatingly dour and lacking in variety that the weight of his efforts casts a pall on everything around him. Diesel actually contributes some fine, emotional work to F8, yet whenever he does, it takes about five minutes of flying cars and Tyrese Gibson wisecracks for the mood-killing heaviness to subside. 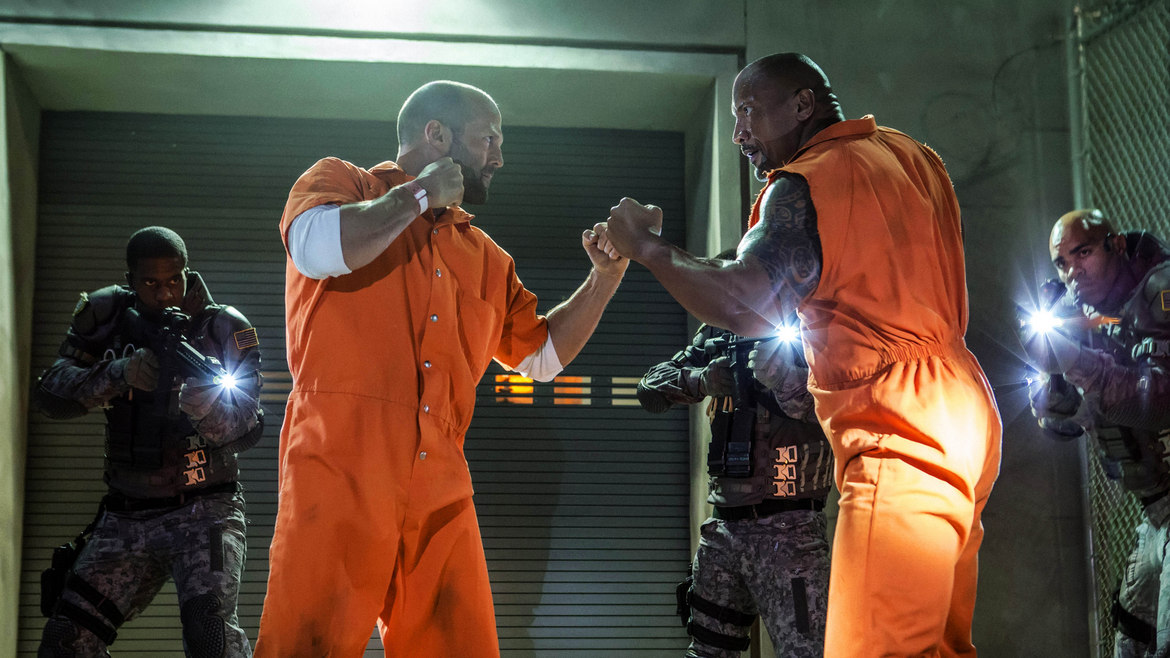 Kudos, then, to Gray and his tech wizards for doing their best to keep things light; as Dom says before that introductory drag race, “It doesn’t matter what’s under the hood; it’s who’s behind the wheel.” (Of course, Dom’s immediate decision to wholly replace his car’s engine suggests that what’s under the hood does matter, but it’s still a nice metaphor.) An action-flick veteran who successfully shifted to the heightened realism of 2015’s Straight Outta Compton, Gray stages beautifully ridiculous set pieces in F8. His massive jailbreak sequence, with Statham parkour-ing all over the place and Dwayne Johnson punching everything in his proximity, is a rambunctious highlight, and the scene of dozens of driver-less vehicles causing traffic melees in downtown Manhattan is a miracle of choreographed stunts and mostly seamless CGI. Yet Gray proves just as adept at keeping the proceedings bouncy through the sharply edited banter of Dom’s crew, with every hoped-for reaction shot, particularly those of the comically expert Gibson, landing with aplomb. Even the charming family cookout at the end (and these things wrap up with cookouts the way animated family comedies conclude with dance numbers) shows its director giving smart, thorough consideration to composition and timing ... although, to misquote Dom, it doesn’t matter what’s served at the barbecue; it’s who shows up for it.

Goofy dreads aside, Theron is a delectably nasty psychopath. While it was probably inevitable that the Furious series would one day find its way to Furiosa, the performer doesn’t treat her assignment as the hack work she easily could have, and instead delivers an insidious, quietly sizzling portrayal that comes close to rivaling Theron’s wicked queen in Snow White & the Huntsman. (I’m not gonna wholly spoil the surprise, but if you were astounded that an A-lister with a Best Actress Oscar was appearing among this film’s cast, guess what: She’s actually one of two.) Rodriguez, Gibson, Chris “Ludacris” Bridges, and Furious 7 recruit Nathalie Emmanuel demonstrate a polished repartee that shines whether Rodriguez is adding welcome gravitas or Gibson is bitching about just missing Interpol’s “10 Most Wanted” lineup. Kurt Russell, another Furious 7 holdover, is pricelessly suave as the mysterious mastermind Mr. Nobody, while newcomer Scott Eastwood, playing Russell’s associate Little Nobody, is understated and funny as a dweeb who turns into a nearly Clint-ian bad-ass. (This is a series that so loves its actors it can’t even write out the deceased Paul Walker, whose Brian O’Conner is referenced as alive and well in domestic life with Jordana Brewster’s similarly unseen Mia.)

And then there are MVPs Johnson and Statham, whose every moment is great whether together or apart – but especially together. As mutually loathing nemeses whose testiness seems a case of dudes who perhaps doth protest too much, Johnson pokes fun at Statham’s lesser musculature and Cockney accent, and Statham laughs at Johnson’s tight T-shirts and calls him “Hercules,” and it’s all almost too hilarious for words. (There's no doubt that the pair's outtakes on the Blu-ray gag reel are gonna be killer. ) The ludicrously globe-trotting, spine-cracking, gravity-defying antics of The Fate of the Furious would be a hoot all on their own. It’s to everyone’s great fortune, however, that the series’ most recent offering is an even better comedy than it is an action adventure. In one scene, Statham himself cracks up at one of Johnson’s more baroque taunts, which immediately has The Artist Formerly Known as The Rock laughing, too, and never in your life have you seen an adrenaline-soaked entertainment suddenly turn so adorable. You don’t know whether you want these guys to get a spin-off or a room.