Ease and Dis-ease: “Our Friend” and “Heaven” 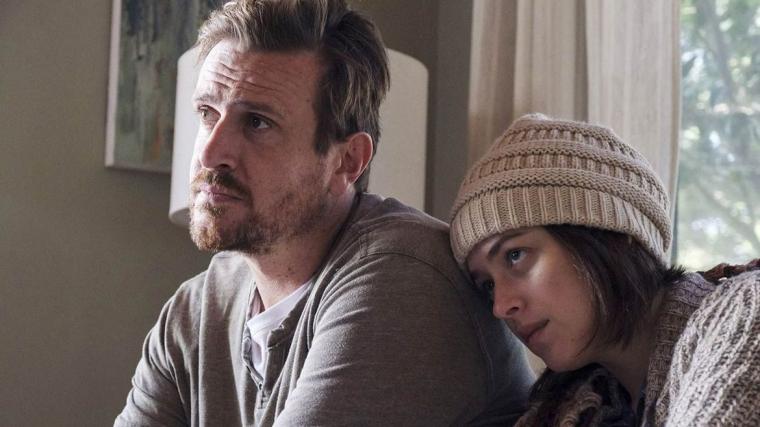 Jason Segel and Dakota Johnson in Our Friend

This past weekend, our area's two debuting cineplex options were Our Friend, which is primarily about a young woman dying of cancer, and Heaven, which is peripherally about a young woman dying of cancer. It probably goes without asking, but no matter how much some of us may relish trekking to the movies these days, what kind of masochist would voluntarily make a double-feature out of such an ostensibly depressing two-fer?

This kind! So let's dive in, shall we?

Even though her film is based on a widely admired, award-winning memoir-in-miniature by Matthew Teague, whose own wife succumbed to ovarian cancer in 2014, the trailers for director Gabriela Cowperthwaite's Our Friend made the screen drama look unbearable, and not in the cathartic-sob-fest way that some of us frequently enjoy. After learning of her 2012 diagnosis, the movie's Nicole (Dakota Johnson) and Matthew (Casey Affleck) agree to let their mutual best pal Dane (Jason Segel) act as live-in caregiver, helping around the house and watching over the couple's two young daughters. What's initially planned as a visit of a few weeks, however, stretches out to a stay of nearly two years, and Teague's honest, unsentimental article – you can, and should, read it at Esquire.com – is a dual love letter to Nicole and Dane that doesn't skimp on the most harrowing aspects of cancer, or what the disease can do physically, mentally, and emotionally to those facing it. In other words, Teague's piece is exactly the sort of brave, uncompromising material that Hollywood routinely screws up in the translation, and from the aggressively on-the-nose casting to the sun-drenched Southern locales that suggest another maudlin trip to Nicholas Sparks-ville, I was primed to find Cowperthwaite's movie that most bothersome of hybrids: intensely well-meaning yet absolutely excruciating.

Well, mea culpa, dammit. Because not only is Our Friend not excruciating (at least in terms of presentation), it's not even close; this moving, keenly observed winner is practically a case study in how to make a tearjerker with delicacy and tact, and without descending into easy pathos, while fulfilling the promise of cleansing tears that presumably drew us to the film in the first place.

To be sure, despite its focus on Nicole's years-long deterioration, Cowperthwaite's offering is nowhere near as clinical and brutal in its detail as Teague's essay, though it's a relief to see a cancer drama at least try to be. (More than a half-century after Love Story, this sub-genre still tends to shy away from true ugliness in favor of escalating beauty, both spiritual and otherwise.) And while I appreciate that screenwriter Brad Ingelsby's adaptation tinkers with the narrative's chronology so that we're allowed some levity – flashbacks to happier times – amidst the suffering, even a bit more levity wouldn't have hurt. Nicole and Dane appear to have been fast friends from the start, but we never get to see what drew Matthew and Dane together, as their one pre-bestie scene finds the men awkward and uncomfortable in each other's presence. So what happened to change that?

Yet for everything that doesn't quite work in Our Friend, about five things do, beginning with the central performances. As much as I generally adore them, I'll admit that I was more than a little worried that the film would find its leads merely giving the portrayals their presences implied: cloistered emotional disconnect from Affleck; abashed, aw-shucks friendliness from Segel; sunny effervescence from Johnson (all the more reason to bemoan Nicole's eventual passing). And we do get those expected characteristics. It's just that we also get so much more. Affleck's role isn't written with the depth of his damaged Manchester by the Sea loner, yet he plays Matthew's conflicted angst with astringent preciseness; you sense this man continually talking himself out of a breakdown because he knows there's no time for one. While Segel is as genial and charming and off-the-cuff funny as ever, he lets us see the aimless depressive that Dane, and maybe only Dane, knows himself to be. We never ask why this man would effectively, voluntarily give up two years of his life for the Teagues, because Segel's every reading and expression informs us that Dane needs them as badly as they need him. It's easily the actor's finest work since his career-peak turn as David Foster Wallace in The End of the Tour … and perhaps even finer than that. 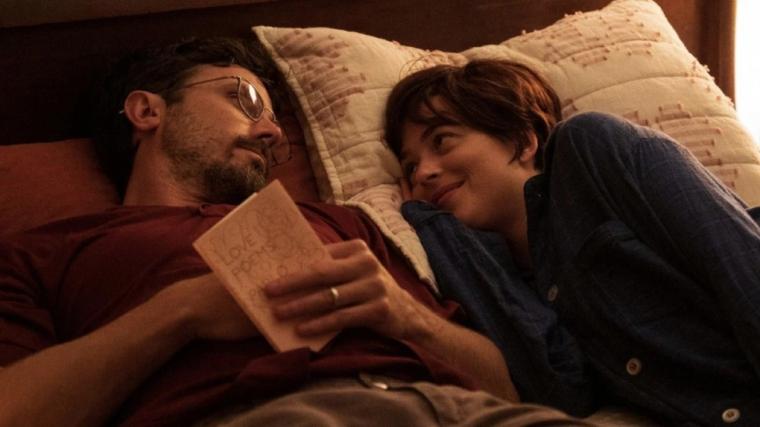 Johnson, meanwhile, is expectedly radiant before cancer takes its toll on Nicole, and when it does, the performer is able to dig deep into reserves of anger, fear, and isolation that, after more than a decade in films, make her seem revelatory. All three of Our Friend's stars are beguilingly naturalistic talents, and Cowperthwaite's astute, gracious direction lets them explore expanded facets of their traditional screen personae while keeping them wholly believable and empathetic. (Blessedly, Cowperthwaite also understands the oft-repeated truism that watching someone cry isn't nearly as affecting as watching someone try desperately not to cry, and there's a lot of trying-not-to-cry here.) As sensitive and human-scaled as they are, though, the film's portrayals are big things. What really makes Cowperthwaite's achievement resonate is its beautiful bevy of little things – or rather, things that only seem little in the context of cancer's unfathomably huge impact. And in Our Friend, more often than not, those things are the extraordinary, blink-and-you'll-miss-them acts of kindness that make this sadly universal story so heartbreakingly specific.

Dane sitting on the front porch with the Teague daughters, playing a game of “Spot the raccoon” while the girls' parents endure an impossible conversation. Dane spicing up the girls' school lunches by putting Pringles on their sandwiches. Neighbors leaving a montage of get-well-soon casseroles at the Teagues' doorstep. A kindly German hiker (Game of Thrones' Gwendoline Christie) inviting Dane for a walk when she senses he shouldn't be alone. Nicole's hospice nurse (a perfect Cherry Jones) gently insisting that Matthew leave his wife's side so he can rest. A hair-dye experiment in blue. A manuscript quietly slipped under a door. A climactic hug void of melancholy and filled with love. Our Friend is practically bursting with lovely found moments such as these, and along with the first-rate performances and elegant direction, they combine to make the experience more emotionally overpowering than you may be prepared for. At the end, Matthew isn't quite ready for Dane to leave. And you're not quite ready to leave the movie. 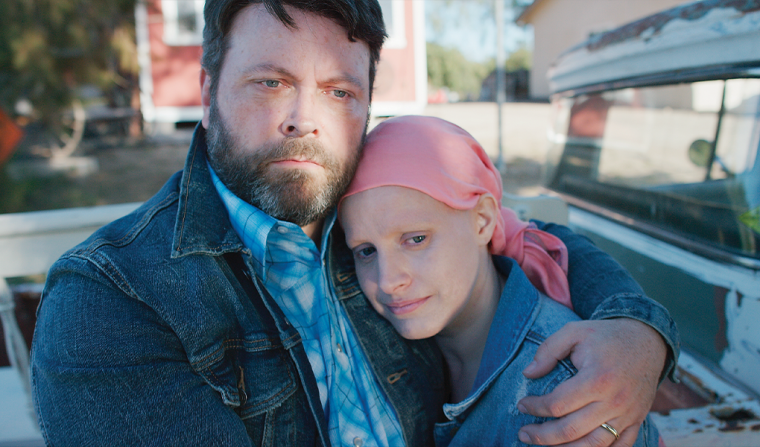 If I've written more about Our Friend than I originally intended to, it's partly because I've been stalling, considering that I don't actually want to write about Heaven at all – although a significant, admittedly petty part of me does want to either insult the film without mercy or drop-kick it into outer space. I try, I really try, to be magnanimous toward obviously micro-budgeted, faith-based entertainments that, with their minimal production quality and non-professional acting and writing and directing, shouldn't be graded on the same curve as, say, a polished, modestly expensive tearjerker starring Oscar winner Casey Affleck. But with Heaven, I'm sorry: Generosity does have its limits. Despite the largely understandable failings, this thing is so off-the-charts awful that it defies belief. Maybe even capitalized Belief, judging by the presumably devout patron behind me who witnessed one of the movie's more astoundingly senseless incidents and loudly said, “Oh, give me a break!”

At the start of this article, I mentioned that the film was peripherally about a young woman dying of cancer, and it is. It's more precisely about the woman's husband, a role played by the movie's producer, director, writer, and probable caterer Angus Benfield. Aside from the man resembling a chubbier, grumpier Nick Offerman, I didn't know anything about Angus Benfield prior to seeing Heaven. I now wish I knew less. A portion of his film is set in 2020 as Benfield's EMT Jonathan Stone contends with his wife Elizabeth's terminal illness – a cruelty that apparently infuriates the man with the same hateful passion he otherwise reserves for his untrustworthy beater truck and his backyard's metaphoric boulder that's roughly the size of a Walmart. Another portion is set some 10 years earlier, when young Jonathan and Elizabeth, prior to their marriage, decided to terminate the girl's unexpected pregnancy on the same calendar day that Elizabeth would later receive her cancer diagnosis. (Coincidence?!?) And the final portion finds Jonathan waking up in Heaven – a miraculous locale art-directed to look like the exterior of a two-star B&B – and, after being reunited with his deceased wife and aborted daughter, being told that the place is great because you can eat anything you want. I wish I was kidding. About any of this. (Okay, fine, the boulder isn't quite as big as a Walmart. At least not a Walmart Supercenter.)

I just … . I don't even know where to start with this thing. “Jaw-dropping,” as a descriptor, is overused in reviews, mine certainly included. But you definitely would've seen my jaw literally drop on numerous occasions during Heaven – and that's with me wearing a face mask. I can't, however, decide what about the film made it drop the furthest. The menacing Eric Roberts, as a “lovable” curmudgeon named “Pops,” making his faith in God sound like an invitation to dine with Satan? Jonathan's best friend announcing his planned “surprise wedding” after a mere three dates with his gal? Said best friend requesting to have said wedding at Jonathan's house because he and his unwitting fiancée “both live in an apartment”? (Ummm... so a church is out of the question?) Young Jonathan leaving an outdoor get-together by saying, completely without irony, “I need to get some air”? The group-effort removal of that city-sized rock whose extraction we're not even allowed to see? (An effect too expensive to show, perhaps?) The situations are improbable at best and offensively preposterous at worst; the dialogue is unspeakable; significant characters, à la Tommy Wiseau's The Room, are introduced mere minutes before the closing credits. And just when you've stopped wondering about the film's chief unsolved mystery – whether it was an accident, suicide, or his cholesterol that sent Jonathan to the afterlife – the real cause of the guy's heavenly journey is identified, and is of such hysterically misapplied grandiosity that it needs to be seen to be (dis)believed. Or, ya know, not. I'm pretty sure that movies such as Heaven are what they screen in Hell.