It's the End of the Summer as We Know It (and I Feel Pretty Grateful): “Don't Let Go” and “Bennett's War” 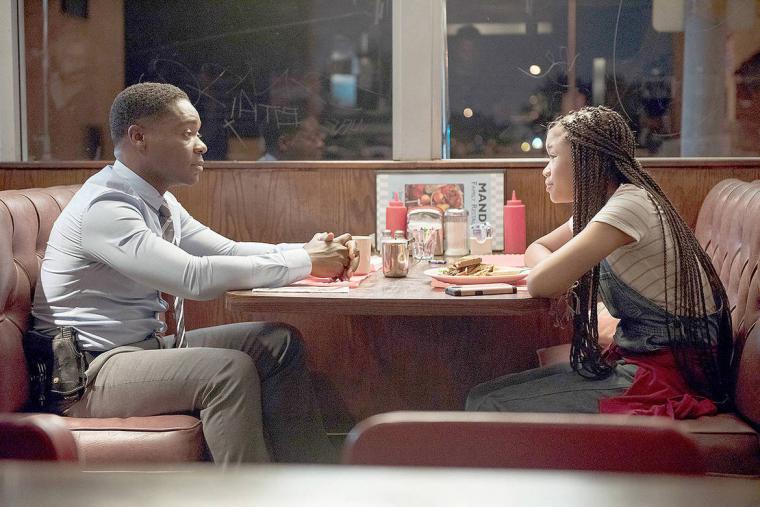 And so, with the passing of Labor Day, the summer-movie season of 2019 officially comes to an end. Not with a bang, but rather, as is annually the case, a whimper – specifically, a pair of releases so thoroughly unpromising that one of our area's two cineplexes didn't bother booking either of them. With that in mind, while we all count the days to It: Chapter Two and the onslaught of hopefully better fall flicks, let's take a moment to look at two films you likely didn't see this past weekend … .

My movie-loving brother occasionally teases me for having to review so many films he's never heard of, and knowing that he likely hadn't heard of writer/director Jacob Estes' supernatural cop thriller Don't Let Go either, I offered a helpful summary when I saw Bro this past weekend: “Okay. So David Oyelowo's brother, sister-in-law, and niece are murdered. But a couple days later, Oyelowo gets a call from that niece, and realizes that she's calling from two weeks ago. So together they have to figure out who the murderer is before the girl and her parents get killed again for real.”

Holding his head in his hands, my poor brother just sighed and muttered, “I hate the world.”

Although he is reflexively (and kind of understandably) angry about the current state of Hollywood, my sibling doesn't literally hate the world. He does, however, hate a world in which stupidly contrived entertainments such as Don't Let Go are allowed to exist, and having seen Estes' bizarre, senseless, and resolutely unsatisfying offering, I can't say I blame him. For a while, though, the movie almost convinces you that it might wind up being almost fun.

Part of that fun, as in last year's Gringo, stems from seeing Oyelowo not carrying the weight of the world on his shoulders and instead diving hip-deep into a silly genre outing, which he does here with the same charisma and intensity of purpose he employed for his roles as Martin Luther King Jr. and Inspector Javert. If Oyelowo is aware – and he certainly must be – that his Don't Let Go material is nonsense, he at least has the professional courtesy not to show it, and the actor conveys grief, astonishment, and tenacity with what appears to be genuine feeling. His coroner Jack Radcliff also forges a teasing, believable bond with teenage niece Ashley (A Wrinkle in Time lead Storm Reid), and Oyelowo pulls off one absolute beauty of a grace note, looking to the heavens in the midst of one of Ashley's post-demise phone communications and plaintively asking, “Where are you calling from?” 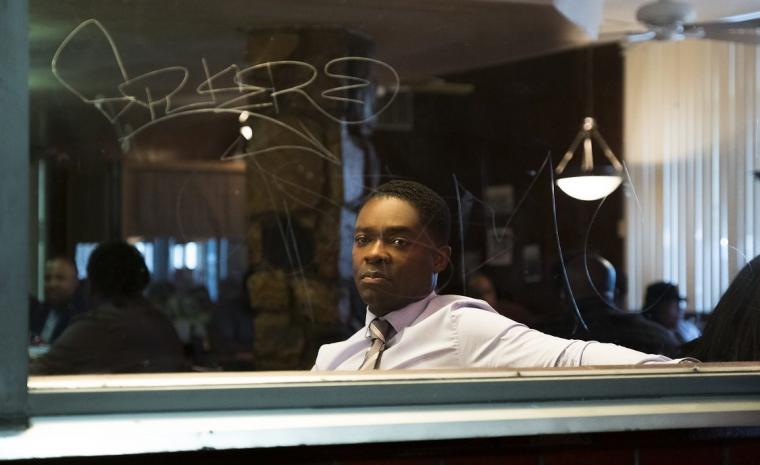 None of this is quite enough to disguise Radcliff's presence as a thunderously boring figure with no interior life, and really no character description beyond “kindly coroner.” But Oyelowo does bring dignity and intelligence to the proceedings, Reid is appealing enough, and initially, it isn't that tough to get on the movie's batty wavelength and root for the pair to suss out exactly how the not-quite-inevitable murders came to pass. (This is especially true given the brief flashes of life supplied by Brian Tyree Henry as Ashley's dad – an apparent drug dealer and theoretically reformed addict who, as usual with Henry, displays more personality, and engenders more empathy, than anyone else on-screen.) Sure, the movie cribs liberally from Memento, Edge of Tomorrow, and even Groundhog Day, and an incomplete synopsis of Don't Let Go might be enough to make you bemoan the world. Estes' feature, though, does display a fair share of ingenuity, as well as a few intriguing metaphysical puzzles, and for the first hour of its 105-minute running length, you'd be hard-pressed to call it boring.

By the finale, however, I would have killed for boring, stymied as I was by the seemingly ever-changing “rules” of this time-traveling universe, and the confounding do-over that only muddies the waters further, and the unnecessarily ugly brutality, and the climax that has a certain narrative logic but left me both depressed and resoundingly pissed. (You're left with the unpleasant suggestion that everything we've witnessed has merely been wish-fulfillment fantasy, but even then the details don't wash.) Adding blatantly obvious performances from the usually reliable likes of Mykelti Williamson and Alfred Molina and all the potentially juicy detours that are roundly ignored, and Estes' film emerges as perhaps the ne plus ultra of get-it-out-and-get-it-gone Labor-Day-weekend fare. Before he signed his contract, it's a pity that Oyelowo didn't get a call from his agent from years in the future: “David. I've seen Don't Let Go. Don't do it.” 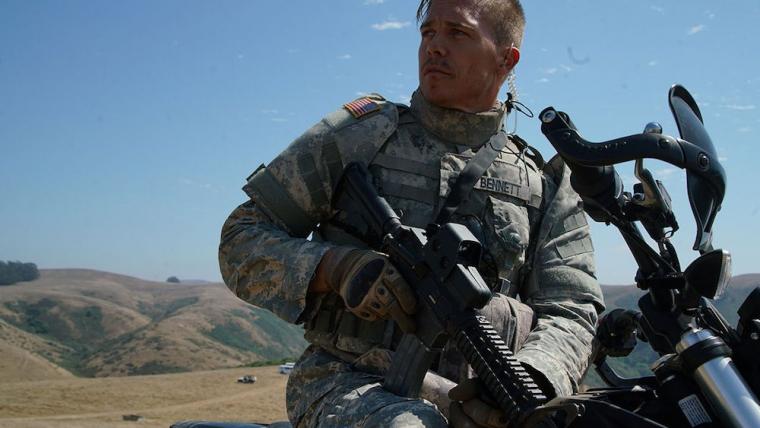 When a movie looks as though it's been awkwardly transferred from home video to big-screen digital and the only star in sight is Trace Adkins, you have every reason to expect that movie to be an irredeemable dud. Yet while it's hard to imagine anyone classifying writer/director Alex Ranarivelo's Bennett's War as “good,” I'd be firmly on-board with “decent”; it was certainly easier to sit through, and less easy to make fun of, than Don't Let Go. Ranarivelo's inspirational drama finds biking dynamo Marshall Bennett (Michael Roark) deciding to save his dad's farmstead from foreclosure by triumphing as a professional motocross racer despite severe injuries sustained as a member of the Army Motorcycle Unit in Afghanistan. It's the type of aggressively life-affirming tale you'd expect to see prefaced with a “Based on a True Story” title card – the sort used to preemptively strong-arm you into being moved even if you really, really aren't. From all evidence, though, Bennett's War is a work of fiction. And while I wasn't all that moved, I was most definitely entertained. For an only-decent movie, it boasts a bunch of more-than-decent things.

One of them is Bennett portrayer Roark, whom I don't think I've ever seen before despite his ample small-screen credits over the past decade. I get why TV has been his medium: Roark is an incredibly solid yet indistinct young actor blessed with soap-opera handsomeness, biceps the size of Christmas hams, and teeth the color of marshmallows. (When Bennett first smiled during a nighttime scene in Afghanistan, it was like a flash bomb going off.) He's ideal, though, for a film that's basically a Hallmark special in cineplex form, and beyond demonstrating a beautifully self-aware sense of humor, Roark's dramatic moments all land nicely, especially when his cyclist is reduced to tears after failing in the once-simple task of changing a light bulb. (Trace Adkins plays the tough, proud father who hugs Bennett after this trauma, and with his magnificent baritone that makes Vin Diesel sound like Kristin Chenoweth, Adkins helps confirm the notion that all country crooners are natural-born actors.) And disregarding its wan visual presentation and clichéd script and stick-figure characters and Muppet-movie narrative, Bennett's War is actually darned close to recommendable overall. She may initially be stuck in the traditionally thankless role of Nagging Wife, but Allison Paige eventually becomes a source of constant audience gratitude as Bennett's funny, level-headed spouse, just as the refreshingly naturalistic Ali Afshar does as our hero's sardonic boss and best friend. (Afshar is so good, and he and Roark so good together, that the actor almost completely quashes any criticisms you may have about the hagiography involved in Bennett's wounded veteran being unfailingly kind to Middle Easterners.) The lump-in-the-throat scenarios may be shameless, but in their abject earnestness, they're also close to undeniably effective. As for a few of cinematographer Rueben Steinberg's shots, their first-person angles did give me a nauseated sense of Hardcore Henry déjà vu. But motocross, happily, is an inherently cinematic sport, and when they're not suggesting low-rent Mountain Dew ads, the hill-traversing, gravity-defying racing scenes here are awfully enjoyable. You don't need much cinematic knowledge to know what's weak about Bennett's War. But I hope a few of you, at least, choose to also take in its strengths.