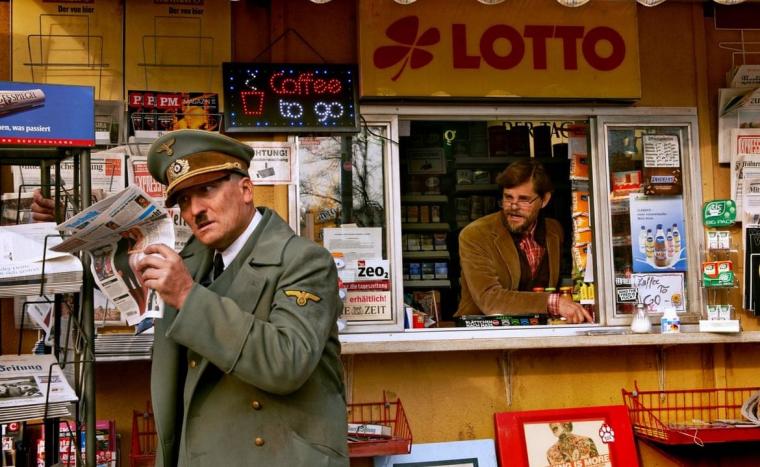 With The Guardian deeming the 2015 work “a thrillingly transgressive hit,” the unorthodox and unforgettable comedy Er Ist Wieder Da – also known by its English title Look Who's Back – enjoys a December 3 screening at Rozz-Tox, serving as the final 2021 presentation in the Kinogarten series of acclaimed, German-themed works hosted by the Rock Island venue and Davenport's German American Heritage Center.

A German satire directed by David Wnendt and based on the eponymous 2012 bestseller by Timur Vermes, Er Ist Wieder Da features scripted storyline sequences interspersed with unscripted vignettes of actor Oliver Masucci posing as an out-of-his-time Adolf Hitler interacting, in character, with ordinary Germans. The film begins in 2014 Berlin with the former German dictator waking up in the park where his former wartime bunker once stood. As he wanders, disoriented, throughout the city, he interprets modern situations and events from a wartime perspective, while everyone he meets assumes that he is an actor merely impersonating Hitler. Attempting to ask directions to the Reich Chancellery, Hitler is told by a mime to find his own spot and is then pepper-sprayed by a terrified young mother. Upon arriving at a newspaper kiosk and reading that it is, in truth, 2014, he becomes dizzy and faints.

Waking at the kiosk some time later, Hitler begins to read about modern Germany, and through the newspapers, he discovers a completely different nation from the one he left – one not at all agreeable to him. Lamenting that Poland still exists on formerly German soil, Hitler says the whole war was a waste, decides that destiny has resurrected him for a reason, and vows to continue his work. Meanwhile, after being fired from the television station MyTV, filmmaker Fabian Sawatzki despondently watches the documentary he had been filming in the park where Hitler awoke, and seeing the tyrant Hitler in the background, begins searching for him in the hopes of making a new movie and getting his job back. What follows results in a sharply political comedy that was a word-of-mouth hit in Germany – hitting the number-one spot in its third week of release – as well as one that earned plaudits including Indiewire stating that the film's "genius lies in slowly lowering your defenses as the clumsy fiction half grows increasingly realistic and spins out of Fabian’s control."

Er Ist Wieder Da will be presented in German with English subtitles, and the film's December 3 Rozz-Tox screening will be held indoors at 8 p.m. German beer and snacks will be available for purchase along with the venue's traditional fare, and the screening itself is free. For more information on the evening and the Kinogarten film series, visit RozzTox.com and the German American Heritage Center at GAHC.org.