The Ex Factor: “Birds of Prey (And the Fantabulous Emancipation of One Harley Quinn)”

BIRDS OF PREY (AND THE FANTABULOUS EMANCIPATION OF ONE HARLEY QUINN)

[ * February 12 update: Apparently, after a "disappointing" opening weekend in which the film only made as much as Parasite has during its entire run, distributors felt the title was the reason for the low Birds of Prey turnout, and it's now being marketed as Harley Quinn: Birds of Prey. Anyone wanna lay bets on whether the name change will help?]

Wrapping up my pan of DC Films' Suicide Squad in the summer of 2016, I wrote, “The inevitable sequel to this franchise-starter can only be better. I say that all the time, and one of these days, damn it, I'm gonna be right.” Hey, whattaya know! I was finally right! Director Cathy Yan's and screenwriter Christina Hodson's Suicide Squad follow-up Birds of Prey (And the Fantabulous Emancipation of One Harley Quinn) is indeed a finer film than its forebear, even if it's still, at best, only half-good. But this is DC we're talking about. Lowered expectations come with the territory. (Back off, Extended Universe fans and apologists: You know I'm right.)

That parenthetically enhanced title probably gives you some sense of the movie's spirit, or at least the spirit it's aiming for: cheeky, chatty, and proudly, even profoundly, over-the-top. Yet for all of the moderate pleasures delivered through its profane, violent, explosion-in-the-confetti-store aesthetic, I actually enjoyed this showcase for Margot Robbie's anarchic harlequin most when it dared to be mundane – when Ewan McGregor's psychopath Roman Sionis, for instance, gleefully showed off his shrunken-head collection, or when Mary Elizabeth Winstead's vengeful Huntress failed, repeatedly, in the simple act of making small talk. Meanwhile, that moment in the trailer that finds Harley shrieking and sobbing with her arms outstretched? It turns out she's grief-stricken over the sudden loss of her fried-egg sandwich. Granted, as she admits, its cheese slice was likely six months old, but man did that thing look delicious.

Had the entire film focused on such trivial concerns, it might have been something truly unique, and maybe even memorable. As it stands, though, Birds of Prey (And the Blah Blah Blah) is just another mediocre comic-book origin story, if slightly more amusing than most, and with the origin itself more peripheral than most. Opening with an animated prologue explaining how Harley went from being the Joker's psychopathic Suicide Squad girlfriend to a dumped, drunken, only-borderline-psychopathic free spirit prowling the streets of Gotham, Yan's film is nearly wall-to-wall Margot Robbie. Ordinarily, this would be a great thing, and for those of us who worried that the malevolent, pigtailed supporting character of 2016 might prove insufferable as a lead, it remains a not-bad thing. Robbie, who babbles incessantly in voice-over whenever she's not squawking on-screen, is clearly having a blast, diving into Harley's physicality with furious enthusiasm and putting enough fresh spins on her readings to make even the harlequin's lamest wisecracks forgivable. 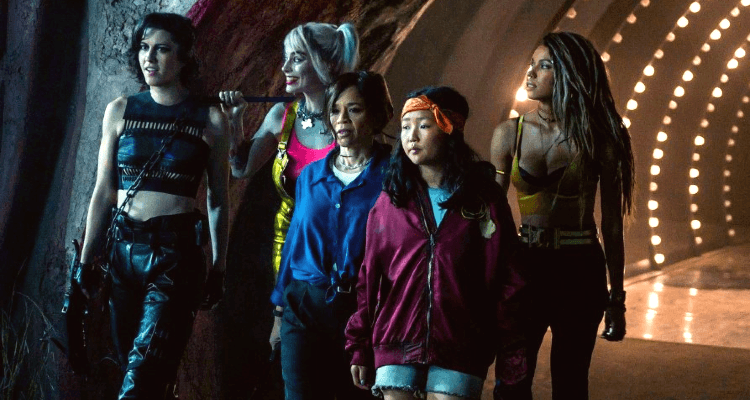 What Robbie can't do, however, is build more than nominal interest in the narrative, likely because her film doesn't seem all that interested in it, either. There's a resident sadist, of course, whom McGregor plays with delightfully fey relish, and also a platinum-blond sadist's assistant (a weirdly miscast Chris Messina), but their plot to retrieve a prized diamond is all but forgotten by the end credits. And naturally, because Birds of Prey is an R-rated comic-book movie, our protagonist has to align herself with a spunky, parent-less teen (Ella Jay Basco) for her to mentor, a conceit that's far less effective here than it was in Deadpool 2 and Logan. As for those benefiting from the “origin” in this origin story, they're the titular team of female superheroes that DC first introduced in 1996. Yet despite their placement above Harley Quinn's name in the title, it's hard to make a case for the Birds of Prey being all that essential to Hodson's tale, given that Winstead's Huntress and Jurnee Smollett-Bell's Black Canary are the only eventual costumed heroines on hand, and given that the script, and Harley herself, never stop reminding you that this is Harley's show, dammit. Still, it's a pretty decent show, especially when it stops reminding you of its understandable yet unfortunate relation to Suicide Squad.

Jared Leto, whom I suppose will forever be remembered as the interim Oscar-less Joker, doesn't return, for which we can all be thankful. Those irritatingly on-the-nose song selections do, though, with the mostly trite soundtrack finding predictable room for Heart's “Barracuda” and a typically DC-funereal cover of Joan Jett's “I Hate Myself for Loving You.” And surprisingly, especially considering the eye-popping colors of the film's first hour, a grim, gray-on-black, Zack Snyder-y palette takes over once events become stultifyingly serious-minded. But if the overall effect is meh, there's at least plenty of pop in the fringe touches.

The hand-to-hand combat is outstanding, with Yan giving us attacking and flailing bodies in motion – if perhaps too much slow-motion – through brutal yet supple choreography that brings to mind the John Wick series. A climactic action melee in a carnival funhouse achieves nearly all the wobbly comic intensity it appears to be aiming for, while occasional nasty fun is delivered in the hordes of Harley Quinn victims seeking retribution for past grievances. (They do make their share of fair points.) The whiz-bang deluge of pop-culture references and sugar high of the first half's color schemes feel absolutely appropriate for the material and the character in charge of its telling. And while this might just be the middle-aged fuddy-duddy in me talking, I almost want to send the Birds of Prey (And the Fantabulous Emancipation of One Harley Quinn) filmmakers a thank-you card for giving Rosie Perez the most satisfying film role she's had in decades, with the performer's hard-nosed turn as a Gotham detective who speaks almost solely in '80s-cop-show clichés a low-key wonder. Back in 1989, Perez became an instant star for busting moves through the opening credits of Spike Lee's Do the Right Thing. Thirty-one years later, bless her, she's still doing it.