Feisty the Snowman: “Abominable” and “Between Two Ferns: The Movie” 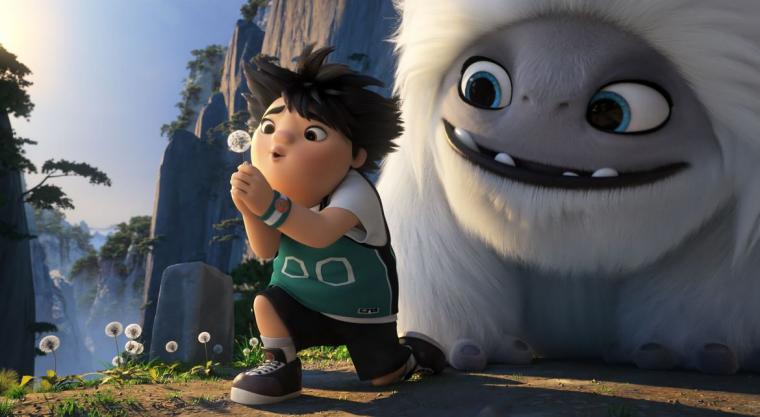 Every once in a while, in my role as a movie reviewer, it feels like my right – nay, my duty – to open with a great deal of whining. Specifically, and through no fault of those booking the films, whining in regard to our options as Quad Cities movie-goers.

This past Friday, for instance, the New York Film Festival hosted the first-ever showing of Martin Scorsese's new gangster epic The Irishman, which was widely deemed an instant classic. (The Netflix release opens in a fistful of theaters on November 1 before hitting the streaming service on November 27.) Netflix's Steven Soderberg comedy The Laundromat, with its cast that includes Meryl Streep, Gary Oldman, and Antonio Banderas, also arrived in larger markets on Friday in advance of its October 18 Internet landing. The Judy Garland bio-pic Judy, which nearly everyone I know (over the age of 60) is dying to see, debuted on 461 screens, none of them remotely nearby. (Fear not, Garland and Zellweger fans: It'll get here eventually.) Iowa City's FilmScene – or rather, FilmScenes plural, given the recent opening of its neighboring sister venue – scored the area premieres of two acclaimed documentaries in Aquarela and David Crosby: Remember My Name.

And the Quad Cities? We got a lightweight animated comedy about a Yeti. Abominable.

That's the title of the movie, by the way, not a comment on our weekend options. But, ya know, if the shoe fits … . 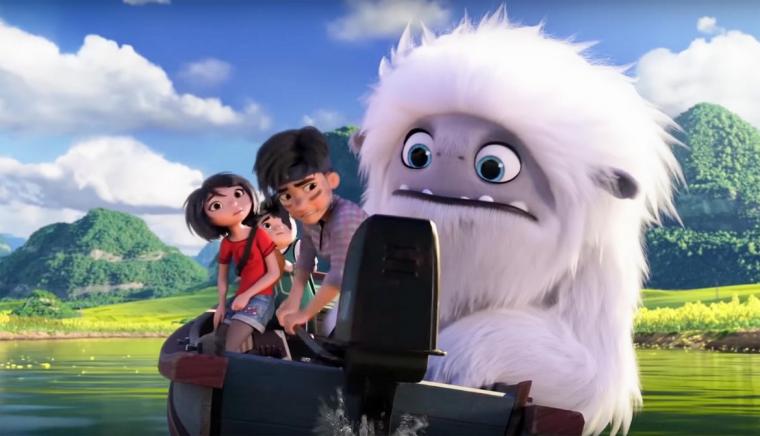 Sarcasm aside, though, the movies are different, though not in ways that benefit Abominable. As opposed to Missing Link's nutty adventurers voiced by Hugh Jackman and Zoe Saldana, the new film gives us, as its titular creature's traveling companions, a trio of earnest youths who are like older, Chinese versions of E.T.'s Elliott, Michael, and Gertie. (There's a lo-o-o-ot of riffing on E.T. in this thing, as well as frequent nods to King Kong, Kubo & the Two Strings, and its studio's own How to Train Your Dragon and Kung Fu Panda series.) As opposed to antagonistic psychopaths voiced by Stephen Fry and Timothy Olyphant, Abominable gives us Eddie Izzard and Sarah Paulson – excellent actors both, but neither of whose nefarious collectors emerge as any kind of real threat. And as opposed to the hilarious readings of Zach Galifianakis' Sasquatch Susan, Dreamworks' furry beastie Everest doesn't speak at all, though he does chuckle and hum – the latter activity allowing the puppy-like behemoth to magically grow blueberries the size of basketballs and ride through the skies on clouds shaped like dolphins. If he can do that, you may wonder, why does writer/director Jill Culton's movie require a feature-length trek, most of it on foot, from Shanghai to the Himalayas? (This was a vexing issue in E.T., too: Just fly Elliott's bike to the spaceship from the start, you lazy alien!) Because otherwise, I guess, we would have been deprived the time-killing visual pleasures of the Chinese travelogue, the formulaic character-building exercises designed for our human leads, and the borderline-religious experience of our heroes scaling the face of Sichuan's Leshan Giant Buddha statue. Though I'm pretty sure all borderline-religious experiences are minimized, as this one is, when accompanied by Coldplay's “Fix You.”

Still, despite all of the narrative holes and the general air of blandness, Culton's outing is easy enough to sit through. Izzard and Paulson aside, the cast is composed almost exclusively of Chinese and Chinese-American vocal talents, and Chloe Bennet, Albert Tsai, Tenking Norgay Trainor, Tsai Chin, and Michelle Wong read their perfunctory dialogue with speed and charm. From the opening first-person tracking shot to the sentimental tableau, the visuals are expectedly ravishing, particularly whenever Everest uses his ill-defined powers; the scene in which our protagonists rode literal tidal waves of dandelions made my five-year-old movie-going companion audibly gasp. (It was indeed an excellent moment, though my own personal gasp came from one of Izzard's salacious asides – a quick reference to gerbils that seemed awfully racy for the film's PG rating.) And while Abominable is wanting in big ways, it's delightful in lots of little ones, as in the comic humiliations suffered by a dopey henchman named Dave, and especially the occasional appearances of one of Izzard's prize pets: a golden “whooping snake” that routinely pops up out of nowhere, emits a high-pitched “Whoop!”, and promptly vanishes. My five-year-old friend consequently played Whooping Snake for the remainder of the evening, calling the nameless reptile her favorite character in the movie. No argument here, and if Dreamworks doesn't immediately capitalize on this critter's popularity – Spin-offs! Halloween costumes! Where's Waldo?-style picture books! – the studio's really in need of a new marketing head. 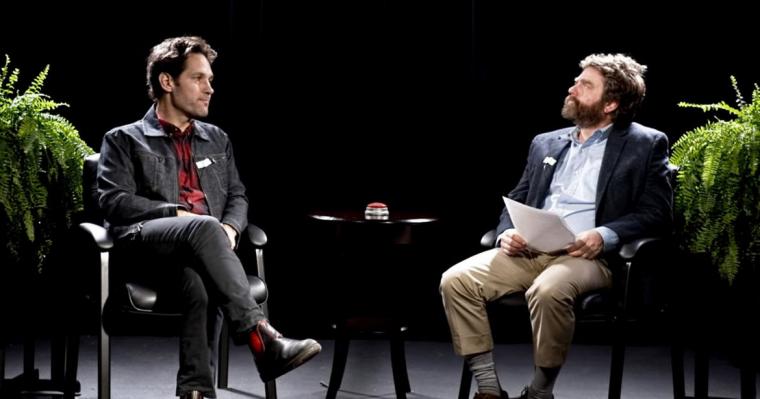 BETWEEN TWO FERNS: THE MOVIE

As noted in this article's preface, Netflix has some serious Oscar possibilities upcoming with The Irishman and The Laundromat, to say nothing of the fall and wintertime releases of Noah Baumbach's Marriage Story, Fernando Meirelles' The Two Popes, and the “Eddie Murphy is back!” comedy bio-pic Dolemite Is My Name. One Netflix title that won't be bandied about come awards season, however, is Between Two Ferns: The Movie, writer/director Scott Aukerman's feature-film expansion of Zach Galifianakis' justifiably beloved, Emmy-winning Funny or Die series. But that seems wrong to me, because just look at the roster of Academy Award winners and nominees recruited for this thing: Brie Larson! John Legend! Benedict Cumberbatch! Hailee Steinfeld! Matthew McConaughey! Though, to be fair, none of McConaughey's baity roles have found him playing himself on a low-rent talk show, his interviewer opening with, “Of all the things you can win an Oscar for, how surprised are you that you won one for acting?”

Galifianakis' Funny or Die skits run roughly five minutes each, and as the movie's 80 minutes prove, that's kind of a perfect length for what they deliver. Even when the host's clueless/insulting interrogations of his studio guests are brilliant here, and they frequently are, the repetition of the shtick grows tiresome, with even the most inspired one-liners (Zach to Keanu Reeves: “On a scale of 1 to 100, how many words do you know?”) blending into one forgettable mash-up. And unfortunately, the film's attempts to “open up” the material through a road-trip narrative and quasi-sincere stabs at character development are just naked spins of the wheels; the endearing Galifianakis looks like a human Muppet, and now has a Muppet-movie storyline to match. But while I got only one genuine cackle out of Between Two Ferns: The Movie itself – a completely unexpected mispronunciation of Cumberbatch's name that Zach dropped after their interview ended – the end-credits blooper reel is absolutely hysterical, and this is coming from someone who doesn't usually care for blooper reels. Watching David Letterman, Tiffany Haddish, Peter Dinklage, Tessa Thompson, Paul Rudd, Jon Hamm (whose interview segment credits him as “John Hamb”), and others crack up in the face of Galifianakis' peerless-doofus deadpan, and watching that deadpan oftentimes devolve into weepy giggles, is three minutes of comedy bliss. Thanks to streaming, they're three minutes I'll no doubt return to time and time again. Lop 'em off their present flick and make 'em their own movie, and Netflix might have a solid Oscar contender for Best Live-Action Short, too.