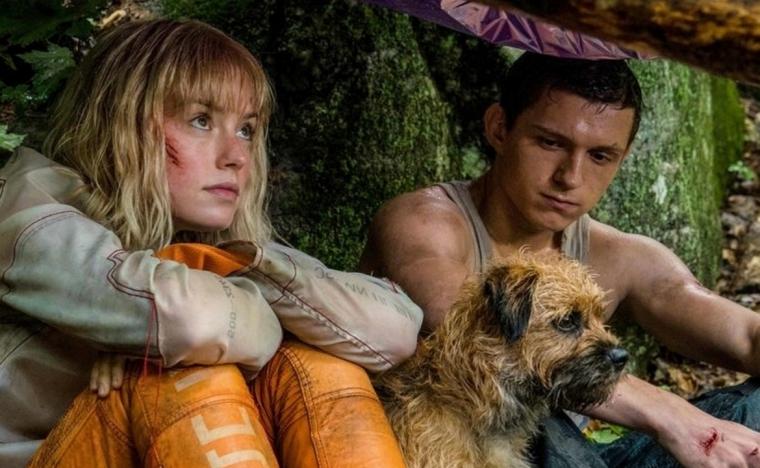 Because the film's principal photography wrapped more than three years ago, there was reason to expect the futuristic adventure Chaos Walking to be a stinker, and because the movie is set in a YA-lit dystopia (and based on the first novel in a trilogy, natch), there was reason to expect it to be a retrograde stinker, to boot. Yet while director Doug Liman's finally un-shelved release shares DNA strands with all those Hunger Gameses and Maze Runners and Divergents – orphaned youths, nihilism, paranoia, common nouns elevated to proper-noun status (“the Noise” and “the Spackle” being the primary examples here) – this largely underwhelming offering at least provides in abundance something those other works woefully lacked: charm.

Our charmer-in-chief is Tom Holland, whose farm boy Todd, in book author/co-screenwriter Patrick Ness' post-apocalyptic universe, lives on a faraway planet where men's thoughts are both audible and visible, radiating from their heads in vaporous clouds of fuchsia and lavender. (At last! Visible proof of Holland's Spidey-sense tingling!) Enter co-charmer Daisy Ridley, whose space traveler Viola crash-lands in Todd's community – a neo-Western landscape in which the entire female population perished years ago under mysterious circumstances. Yet women's thoughts, for whatever reason, aren't public domain the way men's are, and horny young Todd has never seen a woman before, so you can guess what transpires after the kid and Viola eventually meet: unmitigated comic panic!

Also, for the most part, unmitigated delight. Juicy though Chaos Walking's setup is, there are almost too many metaphors swirling around the notion of a world where men are incapable of hiding their thoughts and women don't reveal a thing; you could compose several gender-studies thesis papers merely using the film's preview as inspiration. Holland and Ridley, however, perform their bickering, feature-length pas de deux with supremely witty and winning sweetness. As the pair make their way, E.T.-style, on a quest to contact Viola's mother ship, Todd valiantly tries, and continually fails, to mask his uncertainty, insecurity, and desperate desire to kiss this foreign creature, and Holland, especially in voice-over, milks this slapstick scenario for all it's worth. Todd is mortification personified – a virgin nerd attempting to hide his (figurative) erection from the girl of his dreams – and Holland proves as funny in his well-meaning bungling as Ridley is in Viola's incredulity that any boy, any human, could possibly be this awkwardly transparent.

Most of Liman's latest doesn't work. There are underutilized monsters and world-building conceits that needed at least twice the film's 110-minute running length to be adequately fleshed out, and with the editing a hot mess, characters played by David Oyelowo, Demián Bichir, Cynthia Erivo, Nick Jonas, and others come off as immaterial when they're not actively confounding. But whenever the movie was solely the Tom and Daisy show, I had a blast – just as I did whenever Mads Mikkelsen appeared, his villainous mayor donning a floor-length fur coat to shame Liberace and living in a domicile that resembles a landlocked submarine dipped in Pepto-Bismol. I won't pretend I understood a thing about the guy, but even if Chaos Walking doesn't inspire sequels, I'm crossing fingers for a Mads-centered prequel. 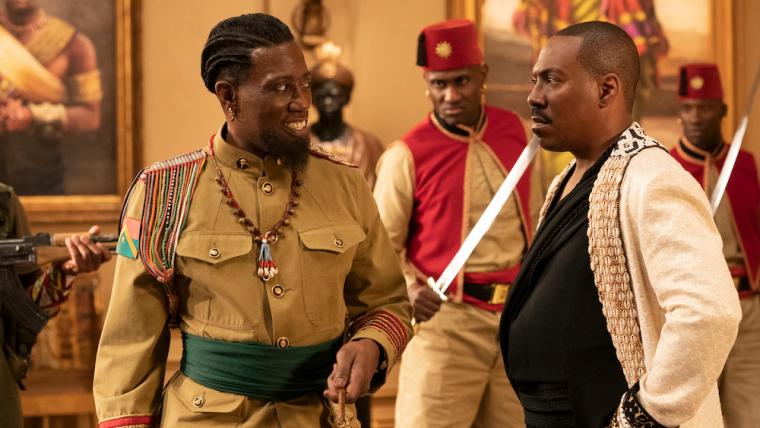 With the pandemic causing a two-month lengthening of the traditional Oscar calendar (nominees will be announced March 15, winners on April 25), films released between January of 2020 and February of 2021 are eligible for this year's Academy Awards. Incredibly, though, we may already have a front-runner for next year's ceremony in Coming 2 America, the long-delayed sequel – now streaming on Prime Video – to Eddie Murphy's seminal fish-out-of-water comedy from 1988. No, Best Picture won't be a possibility, and neither will Best Actor, despite Murphy giving a significantly stronger performance as Prince Akeem here than he did 33 years ago. (Re-watching director John Landis' original Coming to America the other night, I was shocked at how often Murphy dropped character when he wasn't providing one of his priceless cameos under heavy makeup.) But this new outing should absolutely lead to another Oscar for costume designer Ruth E. Carter, who previously won for her iconic Black Panther wardrobe, and whose creations for director Craig Brewer's follow-up are nearly breathtaking in their audacity and detail. While there aren't many genuine giggles in the movie, Carter's eye-popping creations for the African citizens of Zamunda are both visually ravishing and funny; it's as if everyone in Wakanda decided to dress up for Mardi Gras, but this time, they decided to go all out.

Beyond Carter's jaw-dropping achievement, the first-rate prosthetic and visual effects (particularly the 33-year de-aging of Murphy and co-star Arsenio Hall in the NYC flashbacks), and, following his wicked turn in 2019's Dolemite Is My Name, Wesley Snipes' continued resurgence as a madly inventive comedian, there's not much that's memorable about Coming 2 America. Yet it's genial enough. The easiest thing to forget about, or at least ignore, is the plot, which gives Akeem a 31-year-old son (Jermaine Fowler) – the result of a long-forgotten one-night-stand with Leslie Jones – whom Akeem brings from New York to live in Zamunda as his royal heir. Naturally, this doesn't sit well with the prince's first-born daughter (Kiki Layne) who presumed the throne would be hers, and this narrative leads to far too many banal comic set pieces informing viewers that Women Are Just as Good as Men. (A Hollywood revelation of this ilk might have passed muster with 1988 audiences; nowadays, it just feels pandering and insulting.)

But while the storylines are bland and the gags tepid and the PG-13 rating a hindrance – you can practically see Murphy, Snipes, and Jones delivering raunchier punchlines in their heads than they're allowed to voice on-screen – Brewer's release is still modestly pleasurable in a getting-the-old-band-back-together kind of way. It was fun to see the returns of Shari Headley, John Amos, Vanessa Bell Calloway, and Louie Anderson. Even though (or maybe because) he was clearly too unwell to fully participate, I got a little misty at the reappearance of James Earl Jones, his lion's roar muffled but his spirit lively. Fowler, Layne, Nomzamo Mbatha, and Tracy Morgan are all welcome additions; the late Madge Sinclair gets a nice callback; Morgan Freeman inevitably, hilariously pops up. You may not spend much time laughing at Coming 2 America, but you might find yourself smiling more often than you anticipated, even if you wind up forgetting about the film in a week's time. Until next year's Oscars, that is. 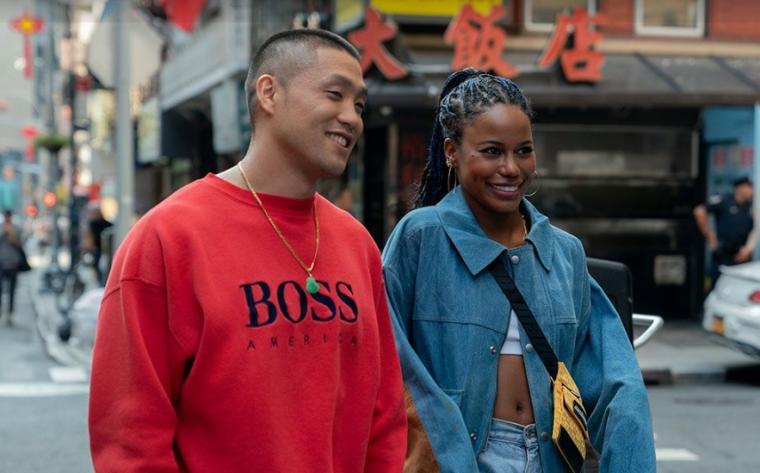 A mostly tedious “inspirational” sports drama blended with a far more intriguing exploration into the lives of first- and second-generation Taiwanese immigrants, writer/director Eddie Huang's Boogie is an unusual, mostly vexing hybrid: a potentially singular and affecting piece waylaid by a central piece of miscasting. Playing the film's titular high-school-basketball star, Taylor Takahashi looks just right as Alfred “Boogie” Chin, an overdeveloped 17-year-old trying to balance his love of the sport, and his burgeoning love for a schoolmate (Taylour Paige's Eleanor), with the wishes of his eternally combative parents (Pamelyn Chee and Perry Young) who are planning for Boogie's hopeful career in the NBA. But Takahashi, making his film debut, isn't able to convey Boogie's inner turmoil, his resilience, or even, given the movie's unreasonably weak editing, his basketball prowess. At this point, frankly, it's not clear what the novice actor is able to convey. He's believably gauche when attempting to flirt, painfully, with Paige in the early scenes, and in classroom sequences he's got that jock-in-the-back-row-who-thinks-he's-God's-gift vibe down pat. But the affectless, poker-faced Takahashi, at least at this early stage in his screen career, isn't at all charismatic, or funny, or legitimately troubled, or really anything else he needs to be for us to have any rooting interest in Boogie's circumstances. This may be the first sports flick I've ever seen in which, after our hero suffers humiliation and defeat yet bravely returns to game play anyway, there won't be a wet eye in the house.

To be fair, and to take some heat off Boogie's untrained star, Huang's movie – also a feature debut for its writer/director – doesn't offer Takahashi a lot of help. Huang is famously the author of the book that TV's Fresh Off the Boat was adapted from, and there are moments here in which the creator's natural, biting humor shines through; I particular loved it when Boogie's mom offered her guest, a Black college-basketball recruiter, a cup of tea and he demurred, calling it “the official beverage of the Sunken Place.” (It's been four years, and Get Out jokes are still in style.) But even though sports dramas are inherently, perhaps even contractually, clichéd, did we really need Boogie's entire future to rest entirely on his defeating a single rival (the late rapper Bashar “Pop Smoke” Jackson) in one intramural game? Did we need Boogie's romantic confidence to be shattered by said rival, in the most predictable plot twist of the new year, being the one guy Boogie's girlfriend slept with prior to their relationship? How about the weird, unresolved subplot implying an affair between Boogie's mom and the recruiter (Mike Moh) who wants the kid to sign with the Chinese Basketball Association? Or the frequent shout-outs to The Catcher in the Rye's Holden Caulfield that would mirror Boogie's experiences if the latter character had any of the psychological depth of the former? The film offers a few solid supporting performances (Chee, who steadfastly refuses to make Boggie's mom likable, is particularly tough-minded), and there are insightful, if overworked, details that make an impression, such as Boogie, being the youngest member of the family, serving tea to his elders with complete, un-ironic humility. Yet for a film with this smooth a title, it's amazing, and unfortunate, how often Boogie winds up tripping over its own feet.