A Very Fine Mess They've Gotten Themselves Into: “Stan & Ollie,” “The Kid Who Would Be King,” and “Serenity” 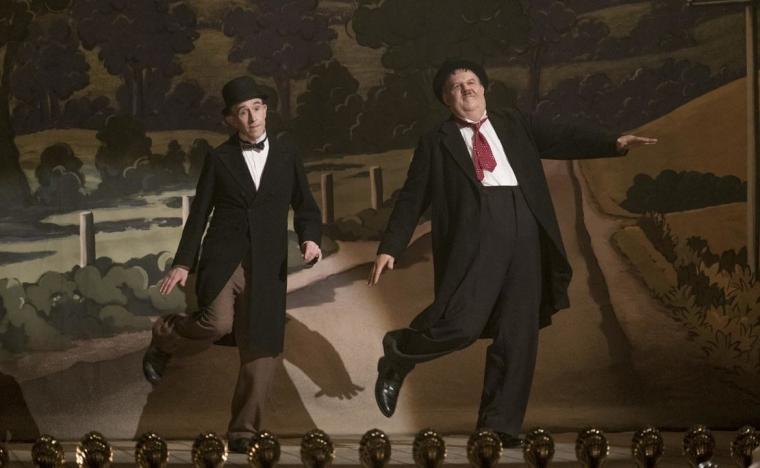 I haven't had living grandparents for many years now, but if I did, I'd immediately guide them toward the wonderful new Laurel-and-Hardy bio-pic Stan & Ollie. Is there any way, even if you're not a grandparent (or great-grandparent) yourself, that I can instead guide you toward it?

Directed by Jon S. Baird and set roughly a decade after the popularity of its titular clowns began to wane, the movie follows screen-comedy legends Stan Laurel and Oliver Hardy through a 1953 European stage tour designed to raise Hollywood financing for a planned Robin Hood slapstick. Baird's and screenwriter Jeff Pope's elegiac tone correctly implies that the proposed Rob 'em Good screenplay will never get made, as does the morbidly obese Hardy's failing health and the longtime partners' collective air of wearily reigned disappointment. But despite the pair's film credits numbering more than 100 over three decades together, Stan & Ollie can't help but make you yearn for more – particularly more from Steve Coogan and John C. Reilly in their roles as Laurel and Hardy. With its simple narrative, presentational refinement, and handsome production values – to say nothing of its profanity restricted to the employment of the word “ass” all of twice, and both times as a synonym for “jerk” – Baird's offering is practically the poster child for the sorts of movies “they don't make anymore.” Coogan's and Reilly's loving, supple teamwork suggests that “they” really, truly should. 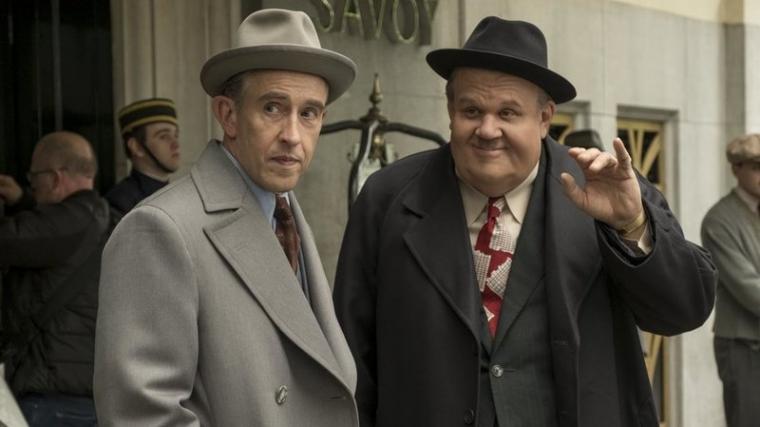 Hidden, but not buried, beneath extraordinary prosthetic work that adds a good 100 pounds to his frame (with another 20 seemingly reserved for his jowls), Reilly is beyond sturdy yet also feather-light, and whether crooning, dancing, or getting knocked on the noggin, the actor captures the quintessential performance delight and joie de vivre that made Oliver Hardy the gentlest of screen giants. (Reilly has also mastered Hardy's brilliant deadpan takes to the camera accompanied by slight head shakes and aggrieved mutterings of “Hmpf.”) Coogan, for his part, looks less like Stan than Reilly does Ollie, but he, too, wholly embodies the sweetness at the core of his Hollywood star's public persona, blending it with private bouts of insecurity and anxiety that make Laurel almost indescribably touching.

I could've watched Reilly's and Coogan's fastidious re-creations of famed Laurel & Hardy routines – the beloved soft shoe from Way Out West, the hard-boiled-egg bit from County Hospital – for hours on end. Yet I was already made thunderously happy by their monkeyshines involving a hotel service bell, and their comic struggle with a suitcase and a flight of stairs (a nod to The Music Box), and the quietly shattering sight of Stan climbing into bed next to the ailing Ollie and tenderly taking his hand; Baird's film is a showcase for its stars, and Reilly and Coogan put on a helluva show. Those who expect Stan & Ollie to be the oldest of old-school corn won't necessarily be wrong – the movie likely would've swept the Oscars had it been released by Miramax in 1999 – and it's easy to wish that there had been a few rougher edges and more hints of darkness. (Two Hollywood stars with seven marriages between them couldn't have been this saintly.) Yet it's still a frequently glorious entertainment, and one made even more so by the exquisite casting of Nina Arianda and Shirley Henderson – two of the most undersung comic talents around – as Laurel's and Hardy's respective spouses. Witnessing the hilariously snippy tête-à-têtes between Arianda's unapologetically curt Russian and Henderson's coyly passive-aggressive American (especially with Arianda being American and Henderson being British), I wasn't antsy for a Stan & Ollie: Part II so much as an Ida & Lucille: Part I. 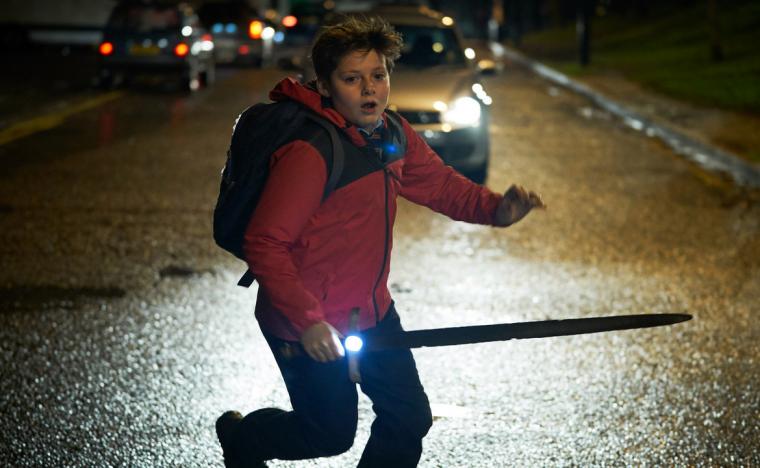 THE KID WHO WOULD BE KING

Beginning with its Arthurian title, nothing about writer/director Joe Cornish's The Kid Who Would Be King is terribly subtle, and more often than not, that's a good thing. Transplanting the legends of Camelot to a modern-day England where newspaper headlines shriek of war, gloom, and misery – the words “war,” “gloom,” and “misery” are literally in the headlines – Cornish's family adventure finds bullied 12-year-old Alex (Louis Ashbourne Serkis) stumbling into a construction site and discovering a sword stuck in a stone. You hardly need a master's in medieval mythology to guess what happens next, and before you know it, Alex will have assembled a team of young knights at the behest of an eccentric teen Merlin (Angus Imrie), who warns of the incipient return of King Arthur's dreaded half-sister Morgana (an unrecognizable Rebecca Ferguson). Taken overall, the movie was goofy, obvious, repetitive, and, running just under two hours, way too long for this adult viewer's needs. It was also, however, sincere and lively and relatively clever. No film in which Patrick Stewart performs wizardry in a Led Zeppelin T-shirt can be entirely disregarded.

Cornish stages large-scale yet decidedly budget-conscious battle scenes involving sword-wielding skeletons on horseback and ambulatory trees that may as well be throwing apples at Dorothy in The Wizard of Oz, and suffuses his outing with an air of apocalyptic devastation that feels overwrought for the minor kicks the movie delivers. But while I yawned at the low-rent grandeur, I was thoroughly charmed by many of the fringe touches that played Cornish's, and Camelot's, material for laughs: the suburban kitchen table whose lifted leaves make it perfectly Round; the Lady in the Lake's arm popping out of water bodies ranging from oceans to bathtubs; young Merlin casting spells with a complicated series of gestures that's half secret handshake and half Three Stooges routine. (Imrie, with his expression of oblivious confidence, is utterly endearing in the role – so much so that it's almost a shame whenever Stewart takes over as a more traditionally recognizable Merlin.) And with Serkis, the real-life son of everyone's favorite Gollum Andy, leading the laudably earnest team of Dean Chaumoo, Tom Taylor, and Rhianna Dorris, Arthurian themes of honor, bravery, and virtue are solidly incorporated into a middle-school setting; that the film's anti-bullying message is overt doesn't make it any less welcome. Excalibur it ain't, but The Kid Who Would Be King isn't without its share of magic. 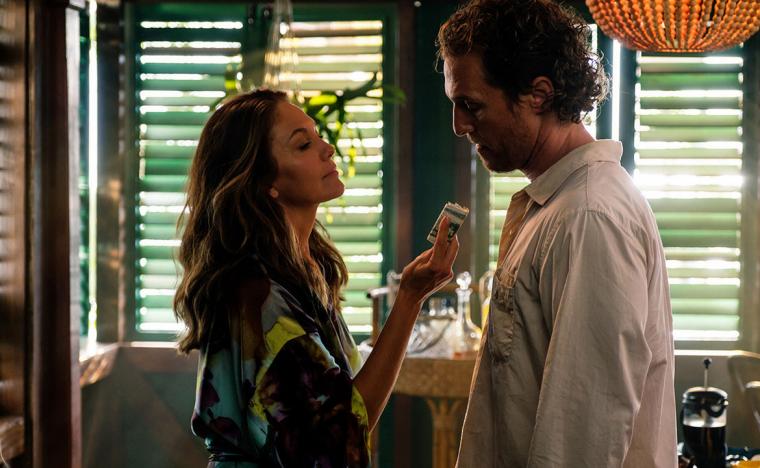 Twenty seconds after the end credits began rolling at my screening of Serenity, I found myself still plastered to my seat. That kind of surprised me, because I've certainly bolted auditoriums housing far less crappy movies much faster than that. But writer/director Steven Knight's experiment in cinematic lunacy simply sapped my will to move. At its worst, the film practically sapped my will to live.

It starts innocuously enough, with a fishing-expedition team played by Matthew McConaughey and Djimon Hounsou (an Amistad reunion!) trying in vain to capture an enormous tuna named Justice. (Heavy-handed symbolism intended, as all of the movie's heavy-handed symbolism surely is – even the coffee cup announcing its holder as “World's Greatest Dad.”) Then Knight's film switches gears, turning into a sun-baked noir in which McConaughey is propositioned by ex-wife Anne Hathaway (an Interstellar reunion!) into murdering abusive husband Jason Clarke for 10 million dollars. And then, the movie's distracting Truman Show vibe grows as surreal as a Dalí painting with the beachfront arrival of a business suit-ed Jeremy Strong, who introduces himself with “I am The Rules” while the screen fills with images of McConaughey's estranged son frantically typing code into his bedroom PC.

Lord, how I wish the results were as fun – or at least as intriguing – as all this might make it sound. But Knight, here, doesn't demonstrate any identifiable skill for Moby Dick-like intensity or Double Indemnity-style thrills or bat-shit insanity. And so, for 105 minutes, Serenity merely sits there, too ridiculous to be boring yet too inept to achieve guilty-pleasure status. Given how contemptibly the talented cast is treated, with poor Diane Lane around only to get laid and bask in the afterglow, it's probably best for all if the movie vanishes quickly. But no amount of time might be enough to erase from memory the sight of Matthew McConaughey giving yet another of his peerlessly atrocious “Look at me, Ma!” performances, and generally spending his fully-dressed screen time either sweating with anxiety or drenched in ocean spume. It's like the production company sponsored a wet-T-shirt contest and McConaughey was the only one who entered.