The Forced Awakens: “Rogue One: A Star Wars Story” and “Collateral Beauty”

Felicity Jones and Diego Luna in Rogue One: A Star Wars Story

ROGUE ONE: A STAR WARS STORY

Rogue One: A Star Wars Story takes place after the events of Revenge of the Sith and before the events of the original Star Wars (which I steadfastly refuse to call A New Hope), and it concerns the Rebel Alliance’s plans to destroy the Death Star. I think that’s about as much detail as I can get into without traumatizing the spoiler-averse, unless “... and I didn’t care for it” counts as a spoiler.

I know, I know; I’m the enemy of fun. And I’d embrace that nickname proudly if Rogue One were actually fun. But it’s not. It’s murky and repetitive and dull, and so lacking in personality that the only half-enjoyable figure on-screen is the C-3PO knock-off who’s such a sardonic worrywart that he (it?) makes Anthony Daniels’ droid look like Pollyanna. (Bless Alan Tudyk for providing the new-and-unimproved pessimist K-2SO with witty vocals even when his/its dialogue is lame.) Director Gareth Edwards didn’t show any particular interest in people in 2014’s Godzilla, either, but I hoped he might steal some of the humanity and emotional gravitas from last year’s The Force Awakens for his own franchise entry. Instead, we’re given endless scenes of preparation and battle with little visual imagination and less reason to care about them, and the actors appear so disconnected from the material that they may as well be reading their lines off teleprompters. The whole movie seems directed by a droid. 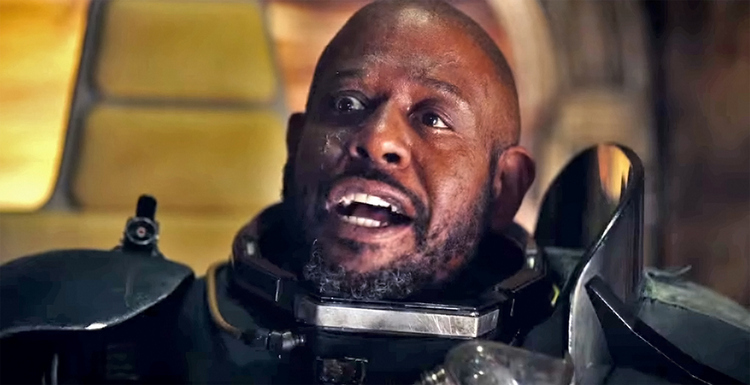 It’s hard to tell if, in the prelude, we’re being prepped for the experience to come by the Stormtroopers outfitted in black, a clearly important character (Mads Mikkelsen’s Galen Erso) dressed completely in black, and even the planet’s sand being black. And a Star Wars with a nihilistic sensibility could indeed be an exciting thing – a gut-punch reminder that the chief villain of this series, way back in 1977, casually blew up an entire planet. Rogue One, however, isn’t “dark” so much as merely dour, with a grim mood of exhaustion suffusing even the theoretically kinetic action sequences. Given the war-riddled circumstances and the natures of their roles, it would be foolish to expect Felicity Jones, Diego Luna, Ben Mendelsohn, Donnie Yen, Wen Jiang, Riz Ahmed, and other gifted participants to be all sunshine and smiles. (As he did in Arrival, Forest Whitaker shows up and again equates “being in a sci-fi film” with “making stern pronouncements in a goofy accent.”) Yet with screenwriters Chris Weitz and Tony Gilroy giving the cast nothing to play beyond steely determination and a few variances on panic, any hopes for relaxed byplay, or even recognizable feeling, die in the stifling B-movie air. We visit a lot of interstellar locales here, and each one is a world that spontaneity forgot.

In the interest of generosity, I won’t deny the moderate kick in seeing where this saga fits in the grand, Star Wars-y scheme of things, and one debuting creature – a mind-reading beast that looks like the melding of an octopus and a giant turd – was momentarily diverting. It was also a pleasure, if an uncomfortable one, to be reunited with Peter Cushing, who hasn’t looked this good (for really good reason) in at least 30 years. Otherwise, to me, Edwards’ outing came off as a low-energy cash grab with few memorable images, some surprisingly iffy effects, John Williams cues awkwardly underlining fan-bait returns – Lovable droids! TIE fighters! Jimmy Smits! – and Stormtrooters who are somehow worse than ever about hitting their targets. (Maybe a future installment will answer the needling query “Who trains these guys?!”) Before the movie’s title blasts on-screen at the start, Whitaker tells our heroine, “We have a long ride ahead of us.” Like most everyone else in Rogue One, he isn’t kidding. 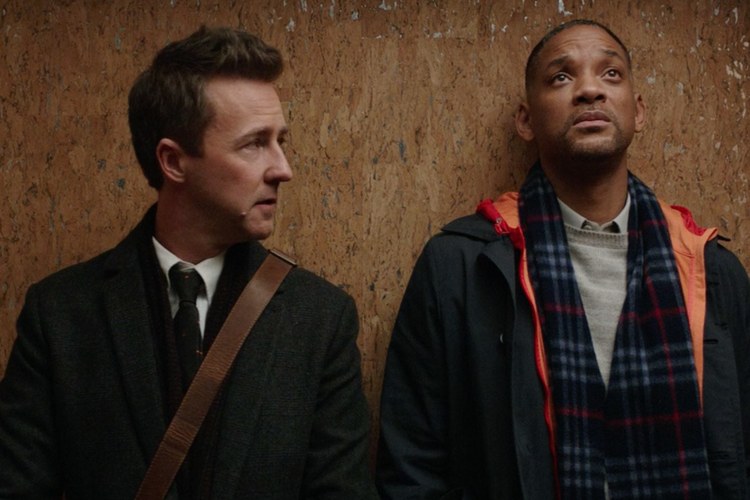 In director David Frankel’s and screenwriter Allan Loeb’s dramedy Collateral Beauty, Will Smith plays an ad-company CEO grief-stricken over the not-so-recent death of his daughter, and Edward Norton, Michael Peña, and Kate Winslet play employees who want to prove their boss mentally incompetent so they can wrest away control of his business. That Norton, Peña, and Winslet aren’t the film’s bad guys – and are, in fact, the CEO’s best friends – may be the least jaw-dropping thing about this stupefyingly insulting slab of holiday cheese. To make that claim, though, you’d have to ignore the plot involving a theatre troupe (Helen Mirren, Keira Knightley, and Jacob Latimore) hired to pose as Love, Time, and Death, the better with which to drive Smith crazy. You’d have to forget about the CEO’s odd talent for slipping in and out of catatonia, and the dementia of Norton’s mom used for cruel jokes, and the broke thespians’ ability to rent a two-story, 200-seat venue in downtown Manhattan. You’d have to just go with Naomie Harris as an impossibly patient therapist and Ann Dowd as an investigator-cum-iPhone-filmmaker, the latter boasting editing prowess to make Spielberg and Fincher green with envy. And you’d have to wholly accept the insufferable “magic” of the finale, an ending of faux-Dickensian shamelessness that simultaneously makes the 90 preceding minutes more hateful than they originally were. Even the film’s title, when finally explained, doesn’t make a damned lick of sense, and I never loathed Collateral Beauty more than when Mirren forced two great playwrights into the proceedings by saying of her ludicrous acting challenge, “This isn’t Noël Coward; this is Chekhov.” Tommy Wiseau is more like it.