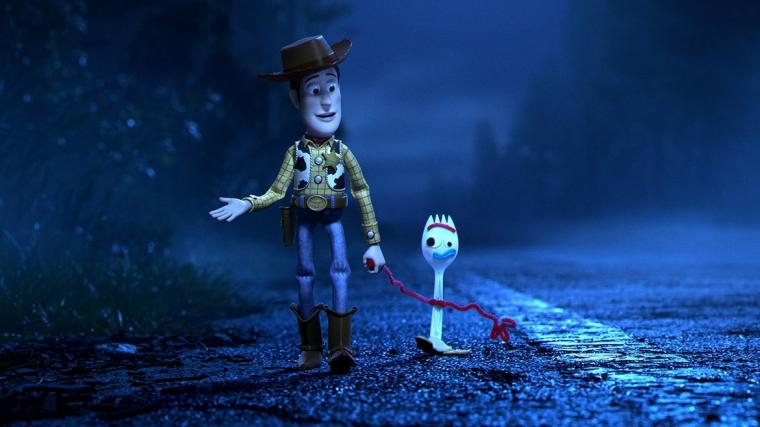 Recently, the great culture critic Mark Harris tweeted, “This summer feels like the summer that everyone has finally decided that 'summer movie season' is a crushing bore” – a sentiment that's hard to argue with even in the face of Disney/Pixar's Toy Story 4. Is this latest franchise entry enjoyable? Absolutely. Is it frequently clever and touching and sweet? For sure. Is it well-animated? Duh. But does it feel the slightest bit necessary? Nope. Does it enrich the inner lives of beloved characters we've known for decades? Not really. And is it in any way a more satisfying end – or “end” – to the Toy Story series than 2010's seemingly conclusive third chapter? No way.

In other words, despite all the painstaking care and phenomenal talent devoted to the film's creation, it's depressingly easy to see Toy Story 4 as the same sort of underwhelming cash grab that I referenced (and whined about) last week in regard to Men in Black: International, The Secrets Life of Pets 2, Dark Phoenix, Godzilla: King of Monsters, et cetera et cetera and so forth. Director Josh Cooley's Pixar outing is the best of the bunch by a wide margin, and there are moments in the film as effective and delightfully nutty as any that 2019 movies have yet provided. But Toy Story 3 (the series offering that my sister not inaccurately refers to as “the Holocaust one”) wrapped up the adventures of Woody, Buzz Lightyear, Jessie, and the rest of the ambulatory-plaything gang with tremendous wit and an earned sense of finality, and did so while also implying that the toys' adventures would never really end. (At least, not as long as there were new children eager to play.) The film was terrific on its own, and even better as the final segment in a presumed trilogy, given that despite our sky-high expectations, it didn't drop the ball. So what, beyond acquiescing to the demands of Disney/Pixar shareholders and making oodles of loot, is the point of Toy Story 4?

I'm not convinced there is one, and to be fair, that's not a deal-breaker – plenty of screen entertainments exist solely to give audiences a good time, which the new Toy Story capably does. Yet its very existence somewhat cheapens the near-perfection of the previous installments, much the same way that the Netflix seasons of Arrested Development made you (by which I mean me) increasingly uninterested in revisiting the series' early glory days. Toy Story 4, thankfully, doesn't exude the same going-through-the-motions vibe that accompanied the Bluths' recent exploits, and also doesn't feel as fundamentally unmotivated as the rest of this summer's many sequels and reboots that have proven uniformly disappointing. The pacing is sharp and the throwaway gags oftentimes sharper, and ever-advancing years have done little to soften the excitable vocal performances of Tom Hanks, Tim Allen, Joan Cusack, Wallace Shawn, John Ratzenberger, and the rest. Yet while familiarilty doesn't necessary breed contempt here, it does breed more than a touch of ennui. 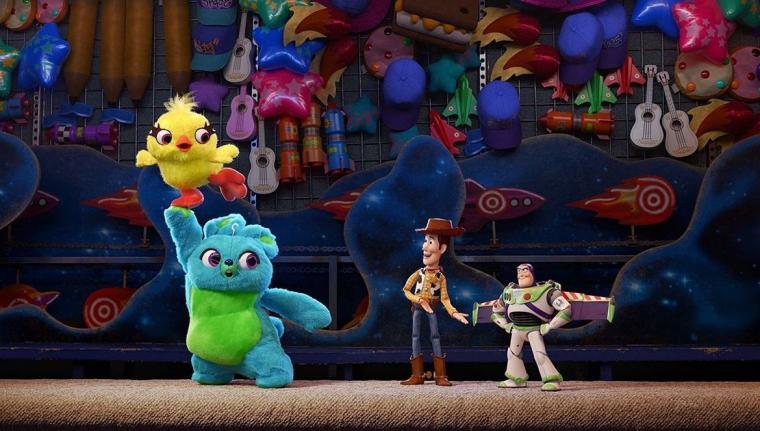 This time around, Woody's existential crisis involves the cowpoke wondering what his ultimate purpose is when new owner Bonnie sidelines him from her daily playtime – a crisis that isn't all that dissimilar from his fears of being upstaged by Buzz in the first Toy Story and losing former owner Andy to college in chapter three. Buzz again undertakes a dangerous mission in which his stalwart heroism initially muddies the waters and ultimately leads to triumph. Slinky Dog, Rex, Mr. and Mrs. Potato Head, and other once-essential figures are again relegated to second-banana status – so much so that it's difficult to remember, even a day after seeing the movie, just what they contributed to the final product. And with Randy Newman's score and songs routinely, predictably underscoring the action, Cooley's film winds up suggesting a cover band ably yet synthetically performing a classic favorite from decades past. It's the tune you remember, all right, but without the freshness that made you fall in love with it in the first place.

Perhaps unsurprisingly, then, it's the debuting characters who make the strongest impressions, and easily make the whole Toy Story 4 experience worthwhile. I was already in the tank for the living craft project Forky the moment he showed up in last year's trailer, freaking out over his newfound consciousness and speaking, and shrieking, with the peerless comic anguish of Tony Hale. Happily, the single-minded yet easily distracted Forky is the best part of the actual movie, too; he's like Buster Bluth reincarnated in the form of a googly-eyed spork. But he has a lot of internal competition: Christina Hendricks' alternately threatening and poignant porcelain doll Gabby Gabby, an antique who longs for a working voice box; Keanu Reeves as the Evel Knievel-style action figure Duke Caboom, a Canadian stuntman haunted by the disappointment in the eyes of his former owner; a trio of sage elder toys who give Woody unwanted advice and converse in the unmistakable tones of Mel Brooks, Carol Burnett, Carl Reiner, and Betty White. (That their characters, respectively, are named Melephant Brooks, Chairol Burnett, Carl Reioneroceros, and Bitey White is everything I love about Pixar.)

And while I adored the newly feminist, can-do Bo Peep as voiced by the magnificent Annie Potts, and totally dug the hideous, Kubrick-ian ventriloquist dummies, I won't pretend that my absolute favorite element wasn't the arrival of the carnival-prize plush toys Ducky and Bunny, who are hands-down Keegan-Michael Key's and Jordan Peele's most priceless pairing since the duo's sketch-comedy series went off the air. I had the pleasure of seeing Toy Story 4 accompanied by my favorite five-year-old (who, as of Friday morning, was already on her second viewing of the film), and while she relished the movie far more than I did, we agreed that the bickering, wisecracking Ducky and Bunny stole the show, with special props to Key and the screenwriters for our new favorite catchphrase: “To infinity … and my foot!” It's a little thing, really, but in an entertainment as largely bland as this one, the little things mean an awful lot. 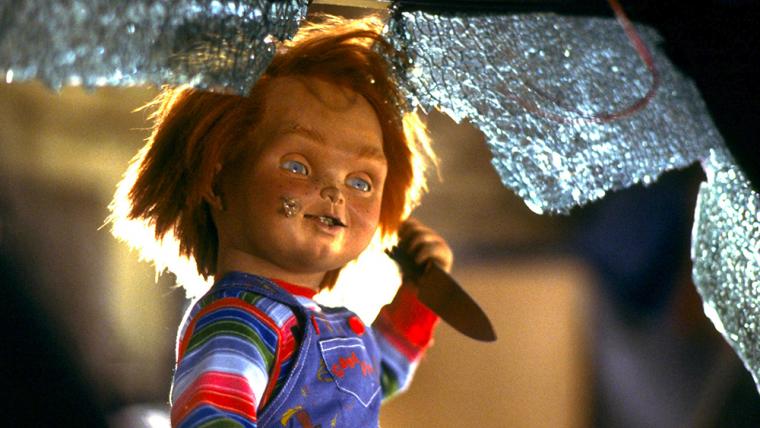 Toward the end of Toy Story 4, Forky watches as one of the film's veltriloquist dummies rounds a corner with flailing limbs and his head turning 180 degrees, and the shuddering spork says, “He's so terrifying!” Yet there's also evident joy in his response – true delight in the doll's utter creepiness – and that same sensation gooses the first half hour of director Lars Klevberg's Child's Play, the remake/reboot/re-whatever of the horror-flick “classic” that first introduced to world to the murderous, gag-happy Chucky. Back in 1988, the squat, red-haired doll was inhabitated by the spirit of a recently deceased serial killer. That plotline being so-o-o 31 years ago, our new Chucky is a technologically advanced smart toy that can activate all your electronic devices and beat you at chess … and, if you'd like, readily off your mom's stupid boyfriend with a carving knife.

For almost half its length, this agreeably silly premise is good for mild tension and solid chuckles, especially with voice-over god Mark Hamill providing Chucky's vocals; here, he delivers a slightly less fiendish version of Hamill's iconic animated Joker. When the distracting employment of CGI isn't in evidence, the puppetry for Chucky is similarly arresting, and a pair of excellent performances are offered by Gabriel Bateman, as the doll's adolescent owner Andy, and the ever-great Brian Tyree Henry, as a friendly detective with mommy issues. Eventually, though, it all descends into poorly staged gore and insufferably ham-fisted punchlines, and Chucky in executioner mode is nowhere near as entertainng as Chucky in biding-his-time mode; while he may be worth the giggly awe of Forky's “He's so terrifying!,” terrifying he definitely isn't. Still, I've seen worse remakes/reboots/re-whatevers of late, and certainly enjoyed the delectable tartness of Aubrey Plaza, who couldn't play a dull, standard-issue fright-film heroine if she tried. Instead, Plaza is aggressively frank and profanely funny, and seeing the film right after Toy Story 4, I couldn't help but imagine a too-juicy-for-this-world mash-up between that sequel and Child's Play, especially when Henry greeted Plaza by calling her “Andy's Mom.” Doesn't that title already belong to Laurie Metcalf?