Fox Force Three: “Bombshell,” “The Two Popes,” and “The Aeronauts” 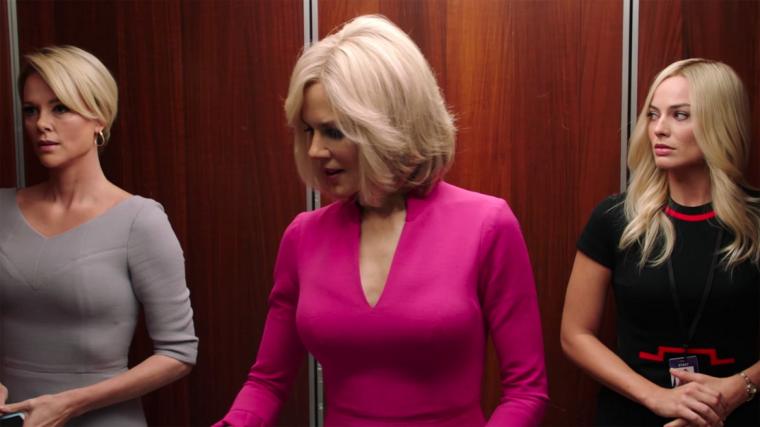 Sexual-harassment dramas aren't designed to be fun. Try telling that to my expression, however, as I grinned and occasionally giggled throughout Bombshell, director Jay Roach's and screenwriter Charles Randolph's fictionalized account of how longtime Fox News chairman and chief executive Roger Ailes was eventually brought down by his, and his network's, systemic mistreatment of women. To be clear, there's nothing remotely amusing about what Ailes did or how his actions were (or weren't) challenged by those who worked either under or above him. But just as he made the contested results of the 2000 presidential election fascinating in 2008's Recount and Sarah Palin's unexpected rise to political power riveting in 2012's Game Change, Roach manages to turn this borderline-queasy tale into transfixing entertainment, its strong, thoughtful script powered by a thunderously good cast. The movie's subject matter, and its choice of chief heroine, may be off-putting; its presentation is anything but.

That heroine is Megyn Kelly, and right away the filmmakers are facing an uphill battle, because for every viewer who adored Kelly's steely-eyed certainty as a Fox News host, there's another who found her conservative shilling unbearable, with her 2015 debate-night “rudeness” toward then-candidate Donald Trump – the event that effectively starts Bombshell's narrative – either the act that slightly redeemed her or made her a newfound cause for vitriol. As he did with Julianne Moore in Game Change, though, Roach conveniently sidesteps this dilemma through genius casting, having Charlize Theron play Kelly with perfect physical and emotional bearing, and under subtle yet devastating prosthetics that make the performer as unrecognizable here as she was in her Oscar-winning turn in 2003's Monster.

Most of us, when we first saw Bombshell's early trailer, gasped at the reveal that it was Theron under those heavily mascara-ed eyes and cheekbones that could cut glass: Was there anyone in the world this gifted actor couldn't eerily replicate? But seeing Theron in the whole of Roach's film is even more astounding. Every once in a while, particularly in morning scenes before Kelly has undergone her full makeup application, you actually can see the performer as you remember her, and it's momentarily jarring. Even then, however, Theron nails Kelly's spirit, or at least the spirit we assume of her, through a combination of unshakable professionalism, instinctive defiance, and hidden inner debate – the sort that, for years, allowed her to prosper at Fox News while fully aware of Ailes' awfulness. One of the film's few significant failings is that it lets Kelly too easily off the hook; Randolph's script can't quite face that Kelly, despite the personal threats and hardships, only came forward with her own accusations against Ailes when it was in her direct interest to do so. Theron, though, never lets Kelly off the hook. Behind Kelly's implacable sheen are boatloads of insecurity and isolation, and Theron registers the woman's self-loathing and fury in quiet, nearly invisible beats that coalesce into a thrillingly fine, arresting portrayal. You'll never weep for Megyn Kelly, and you're not meant to. But with Theron in the role, you might, to your surprise, begin to understand her. 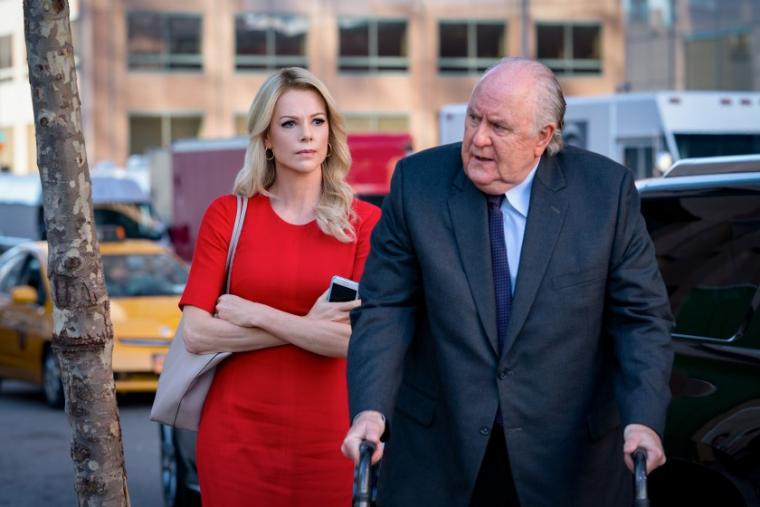 Because Theron in so excellent in Roach's film, everything else becomes somewhat peripheral, but the pleasures in Bombshell – and most of them are performance-based ones – don't abate. Nicole Kidman, as Ailes' first accuser Grethen Carlson, doesn't have nearly the meatiness of material that Theron does, but she cuts a believable, sympathetic figure, and doesn't balk at showing Carlson to be a bit of the stereotypical Miss America airhead her critics routinely accused her of being. Shes not dumb, though, just maybe too naïve about what she can bring to the controlled world of Fox News, and Kidman's self-deprecating likability in the role is enormously winning. Even better is Margot Robbie as composite character Kayla Pospisil, a devout Christian who undergoes a nightmarish humiliation at the hands of Ailes (a monstrous John Lithgow, also under severe prosthetics … I hope). For a movie that hews so closely to televised facts, with numerous instances of stock footage inserted into recreated scenes and Kidman's Carlson superimposed into real-life episodes of Fox & Friends, the inclusion of a fictional character feels too safe, and certainly unnecessary when the film also gives us the names and voices of women who legitimately suffered Ailes' abuse. Robbie, though, is absolutely heartbreaking here, her wounded eyes and gradually stunted physicality effectively dramatizing Pospisil's indignation, anger, and unutterable guilt.

Along with Adam McKay, screenwriter Randolph co-wrote the Oscar-winning script for 2015's The Big Short, and there are times you can feel his new project straining for the inside-baseball, outside-the-fourth-wall cleverness of that film (and McKay's Vice), with one victim of verbal harassment narrating play-by-play in her head and Carlson, after saying that she felt “on second base” at Fox, turning to the camera to tell us, “I hate second base.” But events never descend into full-on snarkiness or camp, and the performers' humanity keeps the jokes from seeming overtly glib. All told, Roach's movie boasts a treasure trove of outstanding, frighteningly exact casting for figures recognizable from Fox News, from Alanna Ubach's Jeanine Pirro to Bree Condon's Kimberly Guilfoyle to Kevin Dorff, who looks so uncannily like Bill O'Reilly that I almost thought Roach had nabbed the genuine article for the role. Kate McKinnon is funny and tart as a low-level assistant showing Pospisil the ropes (in more ways than one); Allison Janney employs a heavy Noo Yawk accent as one of Ailes' lawyers; Richard Kind is appropriately blustery and ridiculous as Rudy Giulliani. And with the ensemble completed by the sensational likes of Stephen Root, Robin Weigert, Connie Britton (as Mrs. Ailes), Mark Duplass, Brooke Smith, Andy Buckley, and Anne Ramsay, the sharpest cameo may be delivered by Malcolm McDowell, whose turn as Rupert Murdoch is almost Dickensian in its character-sketch exactitude. Bombshell shouldn't be a good time. Its actors, bless 'em, just can't help but make it one. 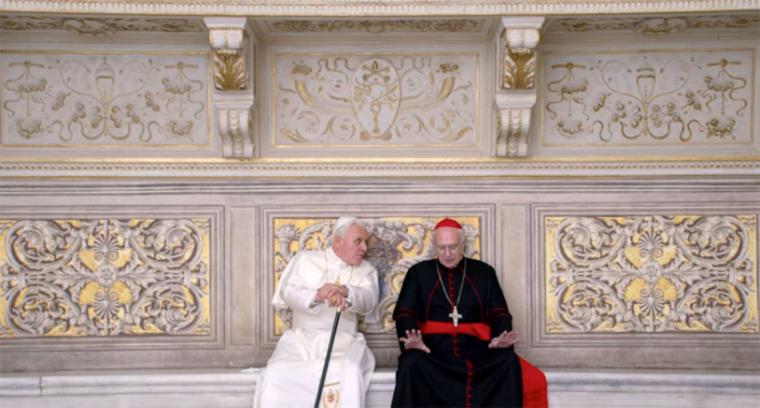 THE TWO POPES and THE AERONAUTS

Academy Awards purists may not feel the same, but personally speaking, I am loving this new trend of Oscar potentials landing on streaming services at the tail end of the year. It's enabled me to watch The Irishman, Marriage Story, and Dolemite Is My Name – or at least my favorite parts of them – more times than I feel comfortable revealing. It's allowed me to see The Laundromat and The Report at home, not with the inconveniences of driving and potentially noisy patrons detracting from the already-mediocre experiences. And, this past weekend, it let me view Fernando Meirelles' The Two Popes on Netflix and Tom Harper's The Aeronauts on Amazon Prime – two movies that I wouldn't have been all that eager to catch on the big screen that I had no problem with from the comfort of my couch.

Fine, I had a few problems with The Two Popes, a modestly engaging two-hander that explores the testy friendship-cum-rivalry between Pope Benedict XVI (Anthony Hopkins) and the future and present Pope Francis (Jonathan Pryce). Not to spoil things, but the movie's ultimate bent is basically all there in its final scene: Look! Popes laugh! And drink beer! And eat pizza! And watch sports on TV! Just like the rest of us! Of course, when all is said and done, popes are, and should be, nothing like the rest of us, and Anthony McCarten's screenplay is a little too self-consciously cute in its determination to frame the former Joseph Ratzinger and Jorge Bergoglio as a devout-Catholic Odd Couple: “Can two celibate seniors share a religion without driving each other crazy?!” The film is further hindered by obtrusive flashbacks to Bergoglio's youth (in which he's played by Juan Minujín) that are biographically intriguing but not all that dramatically involving, especially considering they take time away from the role being more persuasively played by Pryce. Yet Meirelles' gloriously visualized details behind the choosing of a new pope are fascinating, as are many of our leads' acrimonious conversations about which directions will most benefit the church. And Pryce and Hopkins are a splendid match, the former touching and empathetic in no fewer than five spoken languages, and the latter doing some of his sharpest, saltiest comic acting and reacting since The Silence of the Lambs. It pains me to say it, but their participation would actually be enough to make me antsy for yet another reboot of The Odd Couple. 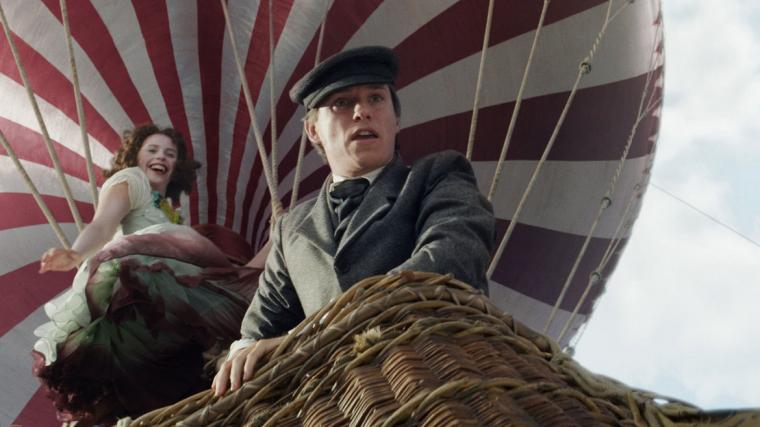 As for The Aeronauts, its own odd couple is one that, for me, would lean less toward odd than insufferable, given that the leads in this real-life hot-air-balloon adventure are played by Felicity Jones and Eddie Redmayne, who already tried my patience as co-stars in 2014's Stephen Hawking drama The Theory of Everything. Since then, I haven't been converted to their causes; despite fine work in the recent On the Basis of Sex, Jones remains resolutely uninteresting to me, and I still find Oscar-winning, Tony-winning Redmayne a fey, irritating, one-note stiff. But The Aeronauts is almost enough to make me reconsider my prejudices. As with The Two Popes, the film's flashback structure is ungainly, if slightly more understandable here, and the forced banter between our leads sometimes comes close to suggesting The Theory of Everything II: Airborne Edition. Yet when our heroes are aloft, with Redmayne's bookish 1862 scientist trying to determine weather patterns while Jones' feisty pilot attends to the balloon's mechanics, Harper's movie actually achieves some of the weightless exhilaration and terror of Alfonso Cuarón's Gravity. Aided by surprisingly effective (if evidently low-budget) effects and a robust Steven Price score, the balloonists' 90-minute trek higher and higher and higher above the clouds is both compelling and, at times, heart-stoppingly scary, never more so than when Jones' Amelia Wren has to climb ropes outside the balloon to make it to the top and kick open the frozen valve that will release air in order to ensure a safe descent. There was also that bit in which Wren threw an adorable puppy out of her balloon when it was hundreds of feet in the air. I may have been watching from home, but on numerous instances in The Aeronauts, I gasped and, at one point, even yelled “No!!!” as though I was sitting on the edge of my theater seat, and Jones and Redmayne enact their characters' harrowing journey with unexpectedly forceful determination and anguish. It may not get nominated for Oscars, but for the time being, this one has my personal “Happy Surprise of December” citation all sewn up.

For reviews of Star Wars: The Rise of Skywalker and Cats, visit “A Game of Cat and Mos.”