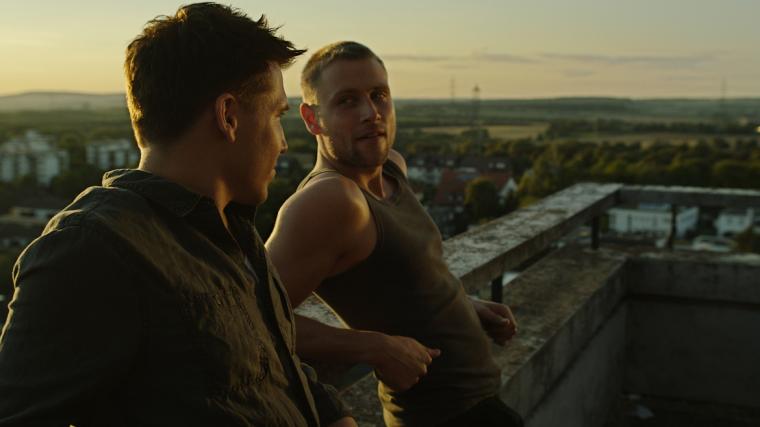 Lauded by the New York Times as “an upsetting and believable study of the disruptive power of unleashed desire,” Free Fall serves as the latest presentation in the Kinogarten series of German works screened on the first Friday of every month, with Rock Island's Rozz-Tox and Davenport's German American Heritage Center, on June 4, co-hosting this award-winning tale that Front Row Reviews called “one of the sexiest and most enthralling gay dramas of all time.”

Described upon its 2013 release as a German Brokeback Mountain for its portrayal of forbidden love between two police cadets, Free Fall finds previously heterosexual Marc (Hanno Koffler) and fellow male cop Kay (Max Riemelt) embarking on an unexpected, life-changing affair. Marc is shaken to the core when he meets Kay on a training course and begins to develop feelings for him. When Kay asks to be transferred to Marc’s unit, however, the latter’s well-arranged life begins to sink into chaos. Torn between his love for his pregnant girlfriend Bettina (Katharina Schüttler) and the rush of a completely new experience, Marc's life spins increasingly out of control. He soon finds himself estranged more and more from his family, and running away with Kay is not an option. But after Kay disappears without warning and leaves no forwarding address, it dawns on Marc that his absence has ripped a gaping hole in his life, and with his situation in free fall, Marc realizes that can no longer satisfy everyone’s expectations – least of all his own.

Filming began in Ludwigsburg, Germany, in the summer of 2012, and Free Fall – titled in Germany as Freier Fall – received strong reviews following its premiere at the Berlin Film Festival in February of 2013 and at the United States' Frameline Film Festival four months later. Praised by Queerty.com as "a powerful dramatization of a passionate gay affair" and by Film.com as "uncompromising and thrilling," Free Fall found Stephen Lacant named Best Director at the 2013 Schwerin Art of Film Festival, with the movie also winning the Best Film citation during Philadelphia Qfest 2013.

Free Fall, which will be presented in German with English subtitles, will enjoy a socially distanced outdoor screening at Rozz-Tox on June 4 beginning at sundown or 8 p.m. (whichever comes first), guests are required to wear masks, and food and beverages will be available for purchase. The screening itself is free, and more information on the Kinogarten film series is available by visiting RozzTox.com and the German American Heritage Center at GAHC.org.