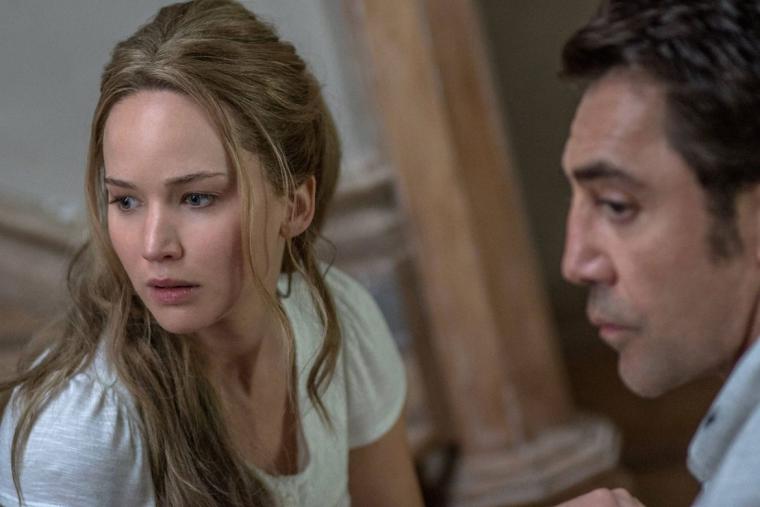 [Warning: Thematic and narrative spoilers ahead. If you don't want mother!'s surprises ruined for you, please bypass this review ... along with pretty much any writing on the film, including character names on its Internet Movie Database page.]

In the beginning of writer/director Darren Aronofsky's mother!, we're witness to fiery destruction, desolation, and darkness, followed by the beatific sight of Jennifer Lawrence waking up on a bright, clear day. Her character, we soon learn, is the dewy young bride to Javier Bardem's significantly older poet, and the pair are currently in the midst of refurbishing the husband's sprawling country home. (Actually, it's Lawrence who's doing the refurbishing, as Bardem claims to be entrenched in the creative process and needs time to think.) The couple seems content, if hardly euphoric, and all appears harmonious until one evening when the doorbell rings, and a man – listed in the credits as “Man” – enters the picture.

Played by Ed Harris, this kindly stranger apologizes after realizing the residence isn't, in fact, a B&B, and he offers to leave. But Bardem, despite his wife's visible dismay, invites Harris to stay, and the two quickly bond over a flask of liquor and Bardem's literary output. (Harris insists that he's a big fan of the author's work.) Later that night, Lawrence awakens to find Bardem still not in bed, and discovers him instead with Harris, who's retching into a toilet and appears to have a newly cauterized wound beneath his rib cage. The next day, however, Harris seems fine, and better than fine when a woman – Michelle Pfeiffer's “Woman” – shows up at the house and reveals herself to be Harris' wife.

A figure of considerable directness and seductiveness, and one with a somewhat unseemly thirst for knowledge, Pfeiffer finally enrages her hosts for ruining a beautiful object she was expressly forbidden to touch. Not long after that, the two sons of Man and Woman (real-life brothers Brian and Domhnall Gleeson) arrive on the scene, continuing an obviously long-running argument over which sibling the parents love more. Eventually, there's a killing. And then a banishment. And then the home's systematic trashing by more and more similarly uninvited guests. And then a flood. And when that occurs, we're still only at the story's halfway point. Am I wrong, or is there perhaps just a teensy bit of analogy going on here?

Some viewers – including, no doubt, those who contributed to mother! receiving a rare “F” grade from the market-research firm CinemaScore – would say I'm definitely wrong, and that Aronofsky's latest is merely a pretentious, stupid, hugely unsatisfying horror flick. (Other titles to receive “F”s this millennium include William Friedkin's excellent Bug and Steven Soderbergh's flawed but fascinating Solaris; mother!'s inclusion continues to suggest that ambition doesn't carry much weight with CinemaScore graders.) Yet once I gleaned, about a half-hour in, what Aronofsky was up to – my theory solidified when that murderer exited with a bloody mark on his forehead – I started giggling at all the previous clues I'd either ignored or hadn't understood. The dichotomy between Lawrence's anxiety and Bardem's joy; Pfeiffer grilling Lawrence about her reproductive plans; Harris smoking in the house despite being repeatedly asked not to … . It all suddenly came together. Then I started giggling in anticipation of just how far Aronofsky would go with this nonsecular conceit. The answer? Further than you'd ever expect, and certainly further than many – maybe most – will want. 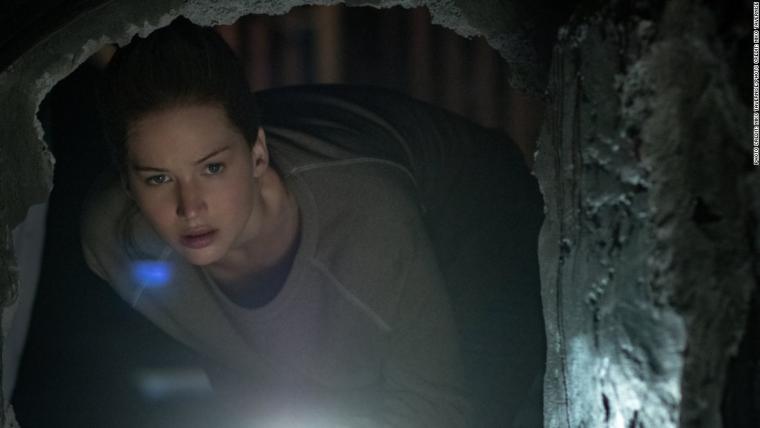 As the advance publicity and trailers for mother! were deliberately vague, it was impossible to know quite what to expect from Aronofsky's follow-up to his Ark-etypal epic Noah, and I presume that a lot of people, like myself, imagined it was going to be some kind of updated Rosemary's Baby with Lawrence doing a Mia Farrow and Pfeiffer in the Ruth Gordon role. And I'd still pay big bucks to see that movie. But who could've guessed the film would actually be a combined prequel/sequel to Noah, and somehow even more religiously themed, and arguably heretical, than that notoriously divisive 2014 release? If you're acquainted with your Old and New Testaments, none of Aronofsky's narrative happenings should come as much of a shock. You still, however, might find yourself flabbergasted at the sheer chutzpah of this modernized, literalized consideration of biblical events – a physically and emotionally violent work that would be appalling if it weren't so gut-level affecting, and that would be unbearable if Aronofsky's audaciousness didn't make me laugh at often as I winced.

That “F” should make it evident that mother! isn't going to be everyone's particular cup of java, and despite the admittedly shameful fun I had, even I felt compelled to look away when it became apparent that, for instance, Aronofsky's literalization of the Holy Communion was fast approaching. (I pitied the patrons at my screening who cooed upon seeing the adorable newborn that Lawrence eventually gives birth to, because there was really only one fate in store for that poor infant.) But if it weren't for those 18 glorious episodes of Twin Peaks: The Return, Aronofsky's inventive, stunningly brave morality play would, for my money, be the cinematic mind-f--- of the year. Heaven (and Hell) knows it doesn't always succeed at its apparent aims, and much of the action in the latter scenes of mother!'s distinct halves feels repetitively dystopian, like watching loops of the brutal Children of Men climax with no knowledge of what came before. Yet I still found the movie an enthralling experience, and such an unexpectedly complete one that even the title's rather precious lowercase spelling and exclamation point wound up making absolute sense.

The central performances are superb, with Lawrence frequently going for broke in her confusion and heartache; Bardem somehow genial, sinister, and unreadable in equal measure; and Harris and Pfeiffer adding delectable mischief and much-needed dry comedy. (Pfeiffer, in particular, handles her material with beguiling playfulness, and as usual these days, makes you wish she were on-screen – including in this role – far more often than she is.) And the film needs portrayals as deeply rooted as these, because despite Aronofsky's creativity and the painterly gorgeousness of cinematographer Matthew Libatique's imagery, mother! could have easily flown off the rails without them. Floorboards that ooze blood? A bizarre yellow elixir that Lawrence downs to quell her fears? Bardem's long-gestating magnum opus that, once finished, fits on a single sheet of paper? Kristen Wiig?! One event or appearance after another raises eyebrows, and usually pulses, in this singularly unclassifiable oddity, and while I don't have answers for everything that transpires, I have a feeling it's going to be an utter blast trying to decode the movie's dozens of tingly details on subsequent viewings. Let the haters hate it. For those of us yearning for exhilarating breaks from the cookie-cutter norm, there's really only one proper response to mother!: Amen. 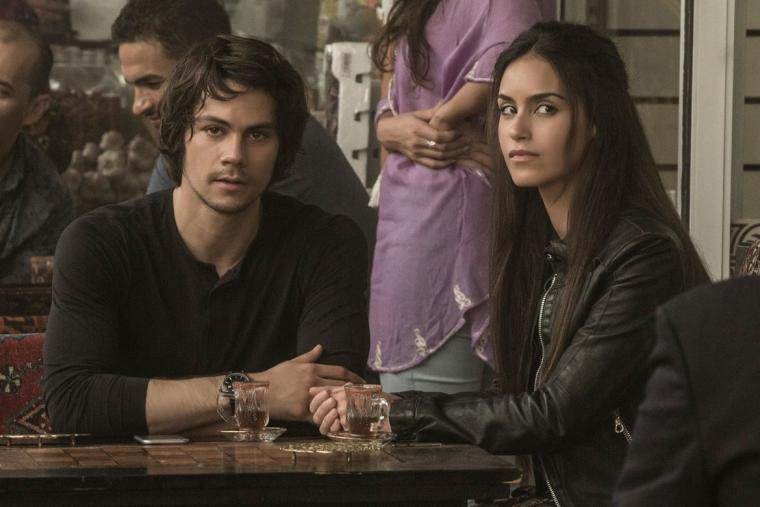 Considering that the accidental injuries he sustained while filming the third Maze Runner caused the young actor to be hospitalized and the sequel itself to be canceled, you'd think series lead Dylan O'Brien, having recovered, would want to start leaning into light, friendly romantic comedies or something. But no. Instead, he plunges headfirst into last fall's Deepwater Horizon, and now into director Michael Cuesta's American Assassin, in which O'Brien plays a vengeance-obsessed tyro planning to shoot, stab, and parkour his way into the single-handed eradication of global terrorism. Shoot for the stars, kid. But for the sake of your future well-being, please remember that rom-coms need their smoldering heartthrobs, too.

Looking spectacularly fit and moving with dexterous speed, O'Brien is actually pretty great in this adaptation of Vince Flynn's bestseller that finds a nuclear explosive falling into the hands of a wronged, rogue arms dealer (Taylor Kitsch). He doesn't display much personality, but as the film's Jack Ryan/Jason Bourne substitute, he doesn't really need to, and Cuesta does an expert job of staging the action so it's clear that O'Brien is doing many of his own stunts, and doing them well. In truth, Cuesta handles all of the choreography with finesse – even if he never improves on the opener's truly scary terrorist attack on a destination-vacation beachfront – and his film, overall, is never less than engaging and professionally assembled. If only it was the least bit interesting.

I was grateful for the measured calm of Sanaa Lathan as O'Brien's CIA cheerleader, and beyond grateful that his chief handler was played by Michael Keaton, whose grizzled CIA vet is such a peerless bad-ass that he continues to denigrate Kitsch's torturer even during the slow, painful removal of his fingernails. But even at its most entertaining, American Assassin is still a wheezily formulaic globe-trotting thriller – within 20 minutes, I'd already lost count of how many countries we visited – complete with requisite “Villain or not?” vixen (Shiva Negar), protracted foot and car chases, and, at the finale, ticking red clock. As Keaton says after a confused O'Brien asks him what's going on: “Some bad people are planning to do some bad things, and it's our job to stop them.” Leave it to the former Batman to deliver a precis on this entire genre in a succinct 17 words.